On 7 August 1918, residents in Singapore would have woken up to read an unusual notice in their morning paper: an invitation to contribute interesting stories of their island over the last 100 years. The public call, issued in The Straits Times,1 sought to gather useful and relevant information so that an official history of the civic, public and social life in Singapore since Stamford Raffles’ arrival in 1819 could be compiled.

The celebratory project had been specially commissioned by the Singapore Centenary Committee to commemorate the island’s centenary. The notice was also published in The Singapore Free Press and Mercantile Advertiser (1884–1942) on 8 August.2

One Hundred Years of Singapore was only published three years later in 1921 and covered the period from 6 February 1819 to 6 February 1919. It was only the second major publication on Singapore’s history, the first being Charles Burton Buckley’s An Anecdotal History of Old Times in Singapore in 1902 . The new book took its cue for style and presentation from Buckley’s publication, and also borrowed heavily from its references. Buckley had left many of his writings with The Singapore Free Press,3 allowing the three British editors of One Hundred Years of Singapore – Walter Makepeace, Gilbert Edward Brooke, and Roland St. John Braddell – to rely on the same documents for their research.4 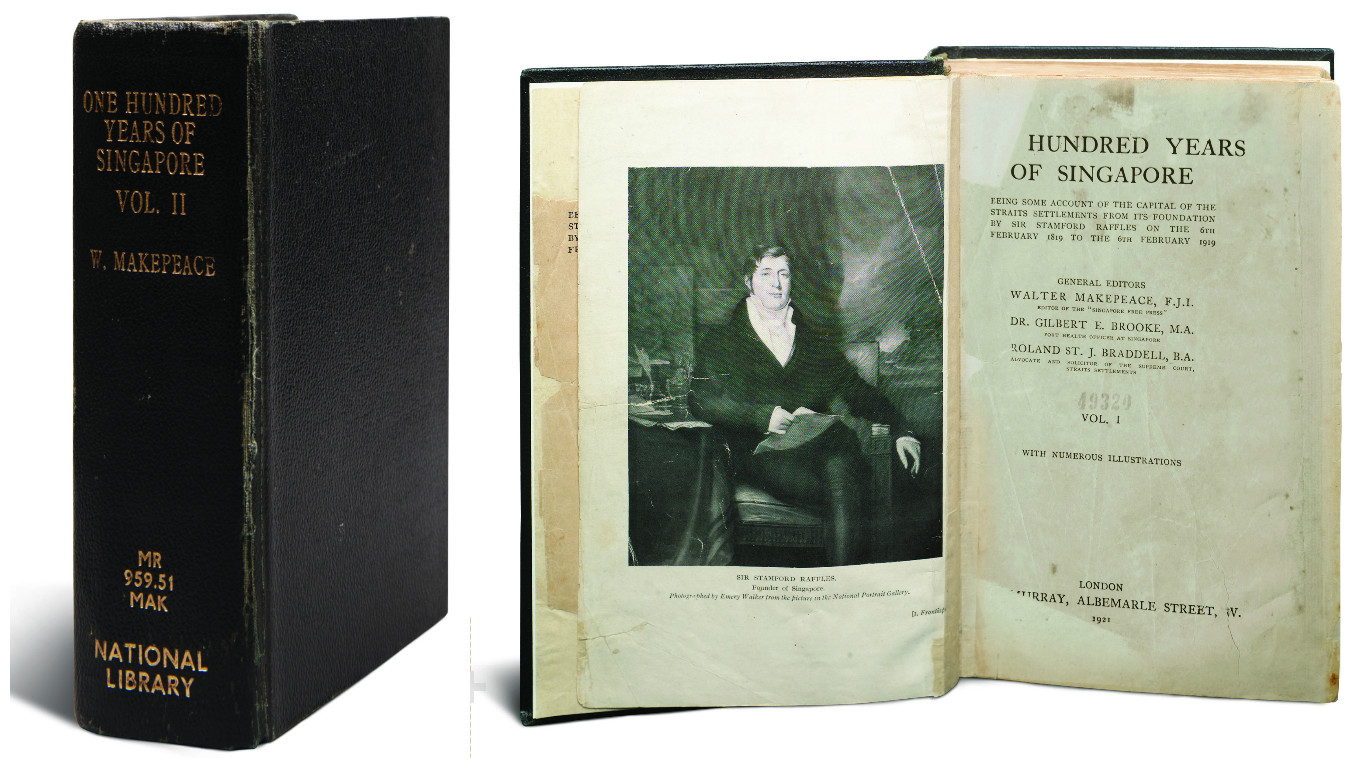 The frontispiece of One Hundred Years of Singapore (Vol. I) shows a portrait of Sir Stamford Raffles, the founder of modern Singapore. All rights reserved, National Library Board, Singapore.

While Buckley covered “very thoroughly the period from the foundation of the Settlements [until] 1867, the period thence onwards is practically virgin soil”, according to the aforementioned notice in The Singapore Free Press. The editors sought a wide range of information, including biographical details of prominent men, descriptions of various events, reminiscences of the island and its people, as well as photographs, cuttings and pictures. Firms and clubs were urged to send in notes on their founders, partners and history, and anyone with books related to Singapore was asked to inform the editors in case they might be required for reference.5

The result was a wealth of stories about Singapore, providing useful insight into the people, places, events and life during the island’s early years. Illustrations and quality reproductions of old pictures add to the publication’s value. The book also contains a timeline of major events and a description of Singapore’s centenary day celebrations.

Not unexpectedly, the perspective and viewpoints presented in the book are mainly that of the British – after all, the book was produced by English colonial officials and academics residing in Singapore.

Among the trio of editors was Walter Makepeace (1859–1941), a prominent Freemason and a journalist and editor of the Singapore Free Press from 1887 to 1926. Makepeace spent 42 years in Singapore and held various positions in the community, including the positions of librarian and president of the Malayan Branch of the Royal Asiatic Society, member of the Raffles Library and Museum committee, and founder and president of the Singapore Swimming Club, among others.6

Makepeace was among the first recruits of the Singapore Volunteer Artillery in 1888, and during the Sepoy Mutiny in 1915, he commanded 200 special constables in Singapore.7 His firsthand familiarity with local organisations enabled him to contribute four chapters and five articles to the book, in addition to his role as editor. His chapters included “The Port of Singapore”, “The Machinery of Commerce”, “Institutions and Clubs” and “Concerning Known Persons”, while his articles were on the military and the legislative council. 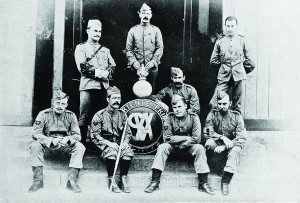 Walter Makepeace (from the left, the second person sitting down in the first row) with sergeants of the Singapore Volunteer Artillery. All rights reserved, Makepeace, W., Brooke, G. E., & Braddell, R. St. J. (1921). One Hundred Years of Singapore (Vol. I). London: John Murray.

One of Makepeace’s co-editors on the book, Gilbert Edward Brooke(1873–1936), was a pioneering public health official in Malaya who became Chief Health Officer in Singapore. Like Makepeace, he was involved during the Sepoy Mutiny but as a transport officer.8 Brooke contributed one chapter – “The Centenary Day and its Celebrations” – to the book as well as five articles: three on science, one on piracy and one titled “Botanic Gardens and Economic Notes”.

The third and last co-editor, Roland St. John Braddell (1880–1966) was a prominent lawyer who served as private legal advisor to Sultan Ibrahim of Johor for several years.9 Braddell wrote many legal and historical publications about Singapore and Malaya, including The Lights of Singapore and The Law of the Straits Settlements: A Commentary, and was very active in public affairs. He was the first president of the Singapore Rotary Club, president of the Malayan Branch of the Royal Asiatic Society and a member of the Singapore Centenary Committee,10 among other positions. His contribution to the book included two articles on law and crime and another two on the colony’s history.

One Hundred Years of Singapore comprises two volumes of about 600 pages each. Both volumes in the National Library’s collection are original copies that have been rebound.