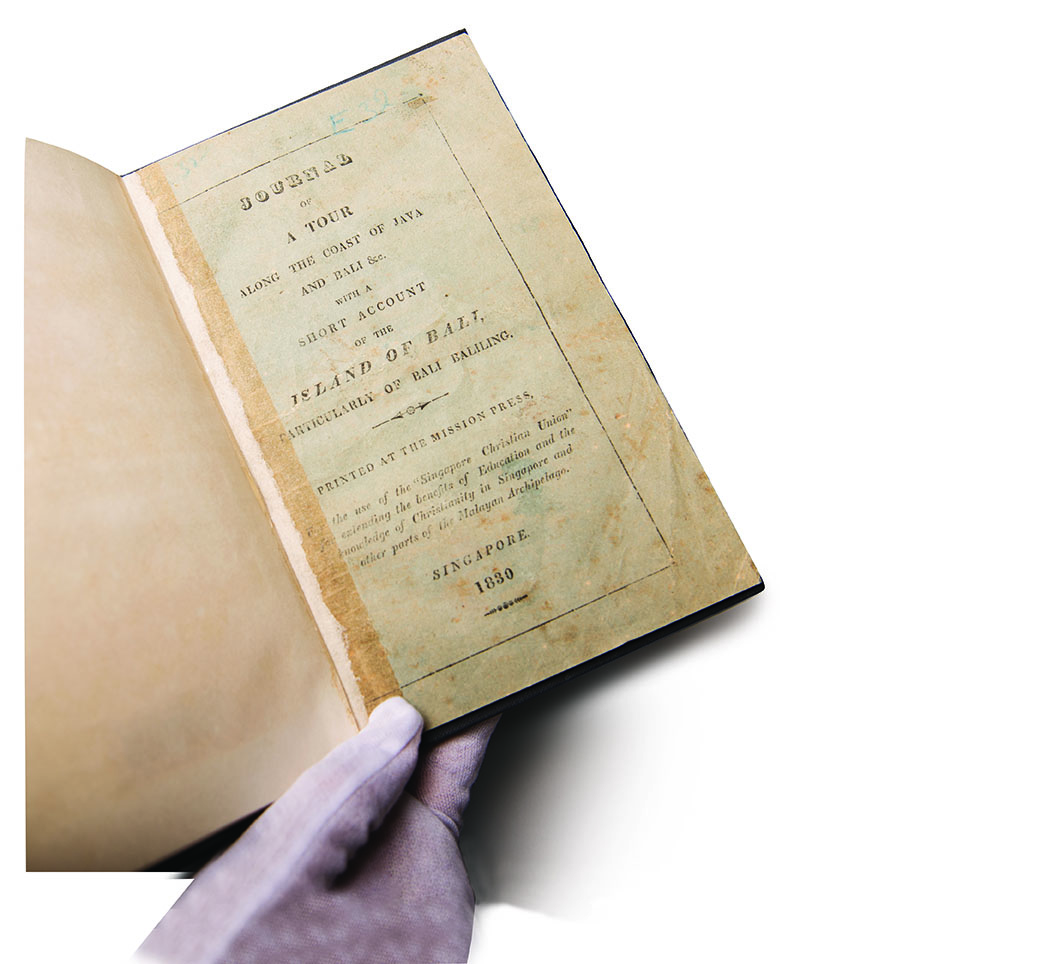 The title page of Journal of a Tour Along the Coast of Java and Bali. This is the earliest extant English publication printed in Singapore and held in the National Library’s collection. All rights reserved, National Library Board, Singapore.

Ironically, the earliest extant English publication to be printed in Singapore and held in the National Library’s collection – in 1830 to be exact – was not about Singapore but on Java and Bali. Written by the English Protestant missionary, Walter Henry Medhurst, whose primary aim was to spread Christianity to the local people, it turned out to be the earliest published account of the history and culture of Bali.

In August 1828, Medhurst left his post in Batavia (now Jakarta), Indonesia, and travelled to Singapore. His intention was to meet with two fellow missionaries, the Reverend Jacob Tomlim and Karl Friedrich August Gützlaff, and travel to Siam (Thailand) and the coast of China.

In Singapore, Medhurst boarded a Chinese junk and began a futile search in the Malay Peninsula for his friends. Disappointed, he gave up and sailed alone from Singapore to the island of Borneo, where he visited a number of Chinese settlements and proselytised to the local communities.

A year later, on 14 November 1829, Medhurst made a second sojourn from Batavia – this time in the happy company of Reverend Tomlim – to Surabaya in Java. There, they stayed several days with the Chinese residents as well as distributing Christian tracts and scriptures. The two men then sailed in a small native prow to Bali, studying the northern regions of the island, especially Baliling, the traditional centre of foreign contact and trade in Bali.1 After nine weeks of travel, Medhurst returned to Batavia on 24 January 1830. 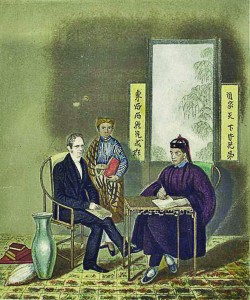 The Reverend Walter Henry Medhurst (1796–1857) in conversation with Choo Tih-Lang, with a Malay boy in attendance. Printed in oil by G. Baxter and used as the frontispiece in Medhurst’s China: Its State and Prospects published by John Snow (1838). Choo, a native of China, helped Medhurst to translate and transcribe the scriptures into Chinese. Courtesy of Wikimedia Commons.

Fortunately for us, Medhurst meticulously recorded his experiences during his journey to Java and Bali. His travel journal, which was intended primarily to provide knowledge about Bali and its surrounding areas in order to facilitate the spread of the Gospel, was printed in Singapore by the Mission Press in 1830.

The National Library’s copy of the journal bears a cover with a caption that states it was specifically produced “for the use of the ‘Singapore Christian Union’ for extending the benefits of education and the knowledge of Christianity in Singapore and other parts of the Malayan Archipelago”. The union had earlier disbursed 76 Straits dollars and 50 cents to fund the printing of the journal.2

Medhurst’s work proved to be popular, and on publication, an extract from his book entitled “Short Account of the Island of Bali. Particularly of Bali Baliling”, was reprinted several times. It was first reproduced in the Singapore Chronicle, the island’s first newspaper from 22 April to 3 June 1830, and later in John Henry Moor’s compilation Notices of the Indian Archipelago, and Adjacent Countries in 1837. The extract was also published overseas – as a separate pamphlet in London in 1831 and reprinted in the July and October 1831 issues of Transaction of the Missionary Society.3

Despite his relatively short stay in the places he visited, Medhurst was able to accumulate a remarkable amount of information on the geography, agriculture, trade, and the culture and customs of the various places he stopped at, as well as on the pockets of Chinese people working on plantations and mines in the various settlements. Among other things, he noted that one of Baliling’s chief imports was opium – of which “20 chests” were shipped out annually from Singapore.4 In Bali, the opium was imported mainly by Bugis and Chinese merchants.5 Singapore was then an important pitstop in the regional opium trade: raw opium was imported from British India, and then processed and distributed to local opium shops for sale to Chinese coolies and also re-exported to other parts of Southeast Asia and China.6

Medhurst was born in London in 1796 and first trained as a printer.7 After finding his calling as a missionary, Medhurst joined the London Missionary Society with the intention of working among the Chinese, and was sent to the society’s Malacca station in 1816. In 1822, Medhurst relocated to Batavia and remained there for eight years, carrying out missionary work in the region and along the coast of China. 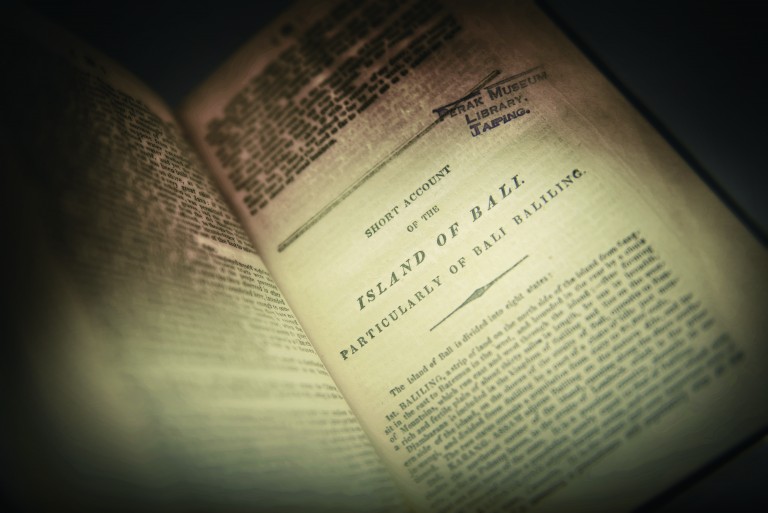 “Short Account of the Island of Bali. Particularly of Bali Baliling” was reprinted several times: it was first reproduced in the Singapore Chronicle from 22 April to 3 June 1830, and later in John Henry Moor’s compilation Notices of the Indian Archipelago, and Adjacent Islands in 1837. All rights reserved, National Library Board, Singapore.

Following the end of the First Opium War (1839–42), Medhurst left for China in 1843 and established the first Protestant mission in Shanghai. He started a printing press, and engaged in the printing and distribution of religious tracts as well as the translation of the Bible into Chinese. In 1856, Medhurst returned to England due to ill health. He died on 24 January 1857, just two days after arriving home.