For a brief period in its history – 43 months to be exact, during World War II – Singapore was known by a different name. Between 15 February 1942 and 12 September 1945, Japanese-occupied Singapore was referred to as Syonan-to (昭南島), or “Brilliant Southern Island”, by its new masters.1

Syonan-to soon became a regional distribution centre for news, magazines and Japanese propaganda. Among the publications were two Singapore-based dailies that borrowed the island’s wartime name. Positioned as the leading broadsheets for the Southern Regions – Japan’s name for its annexed territories in Southeast Asia – the newspapers today provide a wealth of archival information about daily life during the Occupation years.2

he first issue of The Shonan Times, dated 20 February 1942, was printed in English at 140 Cecil Street, the former premises of The Straits Times, Singapore’s English daily that the Japanese forces took over. The very next day, the paper was renamed The Syonan Times and sold for five cents each.3 On 8 December 1942, the publication was renamed again, to Syonan Sinbun, this time in commemoration of the first anniversary of the Dai Toa Senso (Greater East Asia War). Its price was hiked to seven cents and a Japanese morning edition was introduced, with the English version turned into an afternoon edition.4 On the second anniversary of the war, the paper’s name was changed one final time to The Syonan Shimbun, which it retained until its last issue on 4 September 1945.5 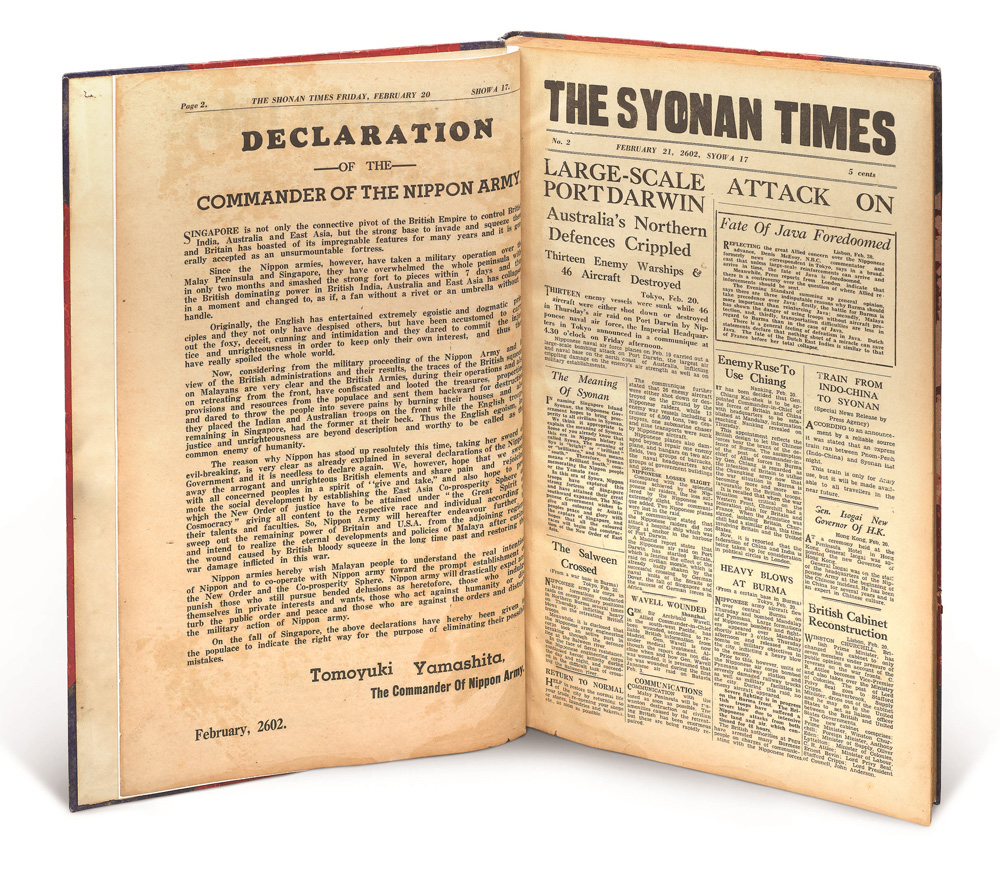 The front page of The Syonan Times dated 21 February 1942. All rights reserved, National Library Board, Singapore.

A Chinese edition, Zhaonan ri bao (昭南日报), was introduced on 21 February, 1942. Priced at seven cents a copy, the paper was put together at the Robinson Road offices of Xingzhou ri bao (星洲日报), the pre-war Chinese newspaper.6 From November 1942, Zhaonan ri bao was issued only in the afternoons.7 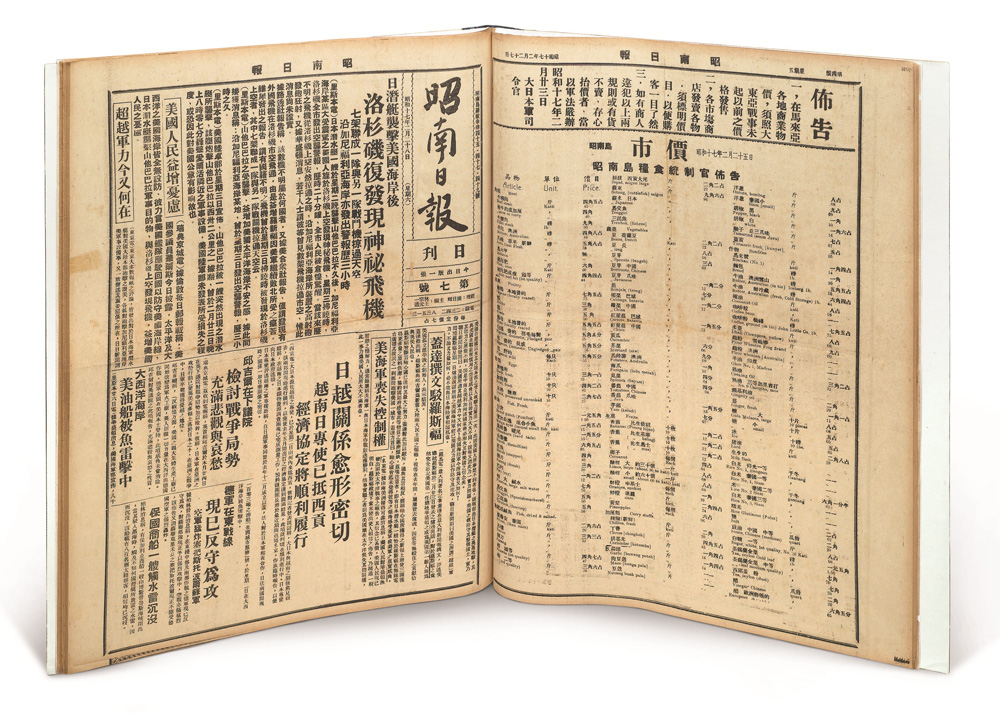 Zhaonan ri bao (昭南日报), the Chinese edition of the newspaper, was first published on 21 February 1942. All rights reserved, National Library Board, Singapore.

The Syonan Shimbun and the Zhaonan ri bao both carried little in the way of objective news. Apart from official notices, announcements, advertisements and obituaries, as well as the odd Saturday or movie supplement, the newspapers contained mainly Japanese wartime propaganda. Any local news the newspapers carried was heavily censored by the Japanese authorities.8 As such, the dailies were not particularly thick nor informative – peaking at six pages for the English edition, and a mere four pages for the Chinese edition.9

One defining feature of the Zhaonan ri bao was that it included more articles about the Overseas Chinese Association, an organisation set up to mediate between the Japanese government and the local Chinese community. It also carried more content relating to Japanese culture, values and history in a section known as “Chao Yang” (朝阳).10

Both papers served as official mouthpieces for Japanese propaganda. They promoted imperial Japan’s vision for the larger Asian region, including the ideas of “Asia for Asiatics” and the “Greater East Asia Co-Prosperity Sphere” – themes that embraced the vision of the Japanese as the liberators of Asia from the enslavement of Western rule.11

The two publications were supervised first by the Propaganda Department located in the Cathay Building, and subsequently by the Domei News Agency – the official news agency of the Japanese Empire – from 8 December 1942 onwards.12 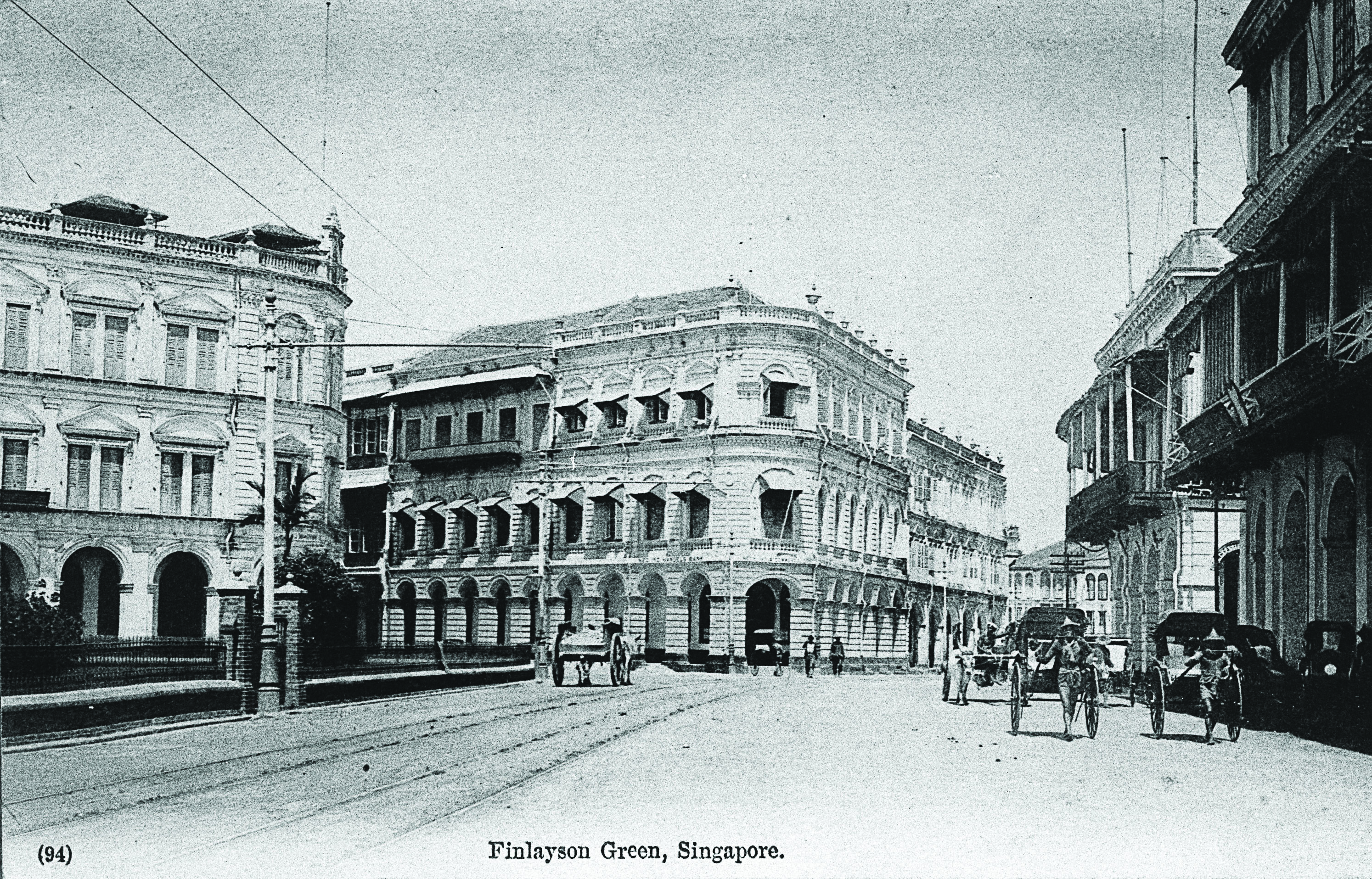 Viewed from the left: No. 1 Finalyson Green, at the junction with Robinson Road; The Straits Times Office – which the Japanese forces appropriated for The Syonan Times – at the corner of Robinson Road and Cecil Street; the two-storeyed offices of KPM (Koninklijke Paketvaart Maatshappij); and the three-storeyed headquarters of Behn Meyer. Lim Kheng Chye Collection, courtesy of National Archives of Singapore.

It was not long, however, before local readers became disillusioned with the persistent claims of Japanese victory and dominion in both broadsheets. A new Malay phrase, “cerita-cerita domei” – meaning “the (fairy) stories of Domei”, in derogatory reference to the dubious nature of the newsstories and the Japanese news agency that policed the dailies – crept into the vernacular.13

The section in the papers that were probably of most interest to local readers would have been the price lists of essential goods, which today serve as a valuable record of the runaway inflation Singapore experienced at the time.14 Despite the Japanese authorities’ efforts to censor media outlets and employ only officially sanctioned government propaganda channels, snapshots of the hardships that people experienced on a daily basis could be read between the lines.