Birds of the Malay Peninsula 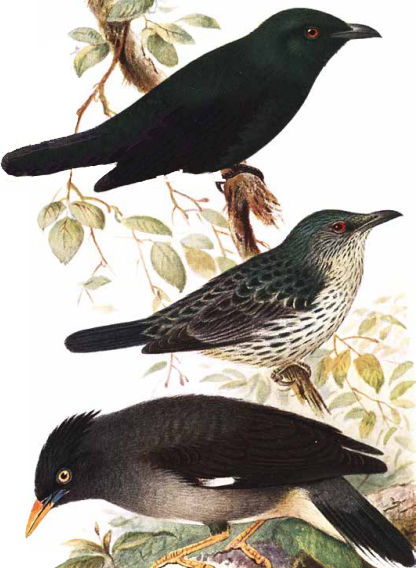 Much has been written about the history of the Malay Peninsula and its people. Far less would have been known about the region’s birds, however, if not for an extensive five-volume series painstakingly compiled by four ornithologists between 1927 and 1976.

Titled The Birds of the Malay Peninsula: A General Account of the Birds Inhabiting the Region from the Isthmus of Kra to Singapore with the Adjacent Islands and accompanied by detailed maps and illustrated plates, the first volume of the series is titled “The Commoner Birds” (1927). The subsequent four volumes are: “The Birds of the Hill Stations” (1928); “Sporting Birds: Birds of the Shore and Estuaries” (1936); “The Birds of the Low-Country Jungle and Scrub” (1939); and “Conclusion, and Survey of Every Species” (1976). 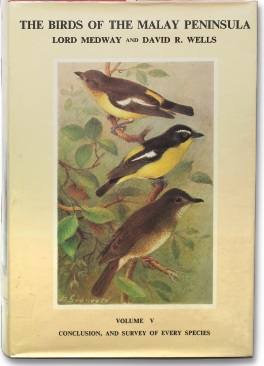 Volume V of The Birds of the Malay Peninsula. This book in the series is titled “Conclusion, and Survey of Every Species” (1976) and was written by Lord Medway and David R. Wells. All rights reserved, National Library Board, Singapore.

The series of books, which has been endorsed by the global ornithology community, is an ambitious body of work that contains comprehensive scientific descriptions of the birds of the Malay Peninsula. Accompanied by rich and vibrant illustrations of the region’s birdlife, the series was authored by four British naturalists – Herbert C. Robinson (1874–1929), Frederick N. Chasen (1896–1942), Lord Medway and David R. Wells.

Until these volumes were published, research works on the region’s birdlife were considered unsatisfactory.1 The series is even more remarkable when one considers the fact that its authors researched and compiled its contents over the span of almost 50 years, all this while combing the thick, impenetrable Malayan jungles to document the 700 bird species that inhabit the region.2 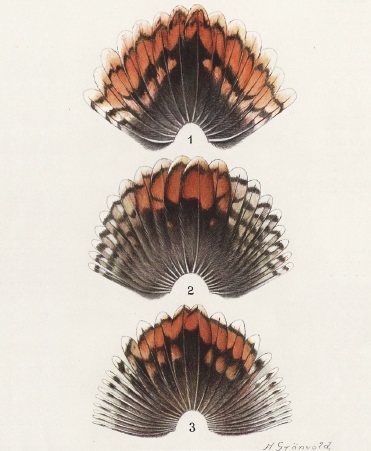 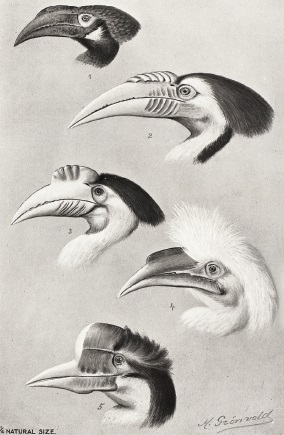 The accounts contain the birds’ Latin, English and Malay names, as well as detailed descriptions of their soft parts, dimensions, the areas they inhabit in the Malay Peninsula and their habits. In 1928, the American ornithology community praised the publication’s “scope and method of treatment [as] admirable and the finely printed plates most satisfactory”.3

Although the production of the series hit several snags – with the last volume published only in 1976, some 37 years after volume 4 was printed – it kept going due to the deep interest in the avifauna of the Malay Peninsula. The timing too could not have been better: the British ornithologists who embarked on the project started their work at a time when the region’s forests were just beginning to deteriorate, much to the alarm of conservationists.

In 1921, the originator of the series, Herbert C. Robinson – a specialist in birds and mammals of Malaya – pointed out that commercial timber exploitation could alter the character of the region’s primeval forests and profoundly affect the fauna.4 Robinson, with the financial backing of the Federated Malay States (FMS) government, then wrote the first two volumes (published in 1927 and 1928 respectively). The series was planned for release at half-yearly intervals5 but Robinson died in 1929. The work was resumed by Frederick N. Chasen – the first curator of the Raffles Museum6 – who completed volumes 3 (1936) and 4 (1939), and outlined his plans for volume 5 in the preface to the fourth volume. 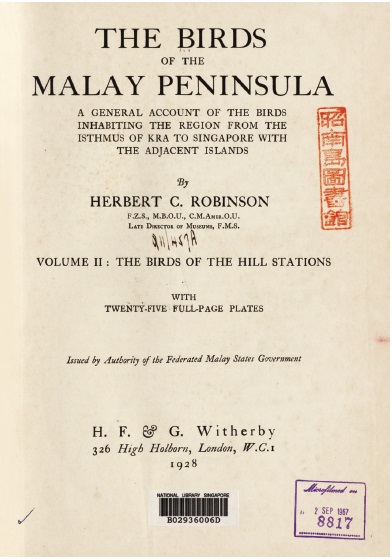 Published in 1928, Volume II in the series is titled “The Birds of the Hill Stations” and written by Herbert C. Robinson. All rights reserved, National Library Board, Singapore.

By 1942, preparation for the final volume was interrupted by the outbreak of World War II in Malaya. Chasen tragically drowned when the ship he was travelling on board was sunk by the Japanese days before the fall of Singapore. Chasen’s house is said to have been looted after he left, but the Raffles Museum remained intact throughout the war, although no sign of the manuscript was ever to be found.7

Interest in continuing with the final volume was revived more than 20 years later. In 1948, when a new introductory publication on Malayan birds was released, the first four volumes were already out of print.8 By 1958, the series had become a collector’s item.9 After the war, Edward Banks, the former curator of the Sarawak Museum, wrote a replacement text for the final volume and deposited it in the British Museum (Natural History).10 In 1964, Ken Scriven, a long-time resident of Malaysia and ardent collector of Malayan birdlife,11 chanced upon not only Banks’s text but also the coloured plates created by H. Gronvold in London. He shared the discovery with fellow enthusiasts and conservationists Lord Medway (Gathorne Gathorne-Hardy, also known as the 5th Earl of Cranbrook) and David R. Wells, who in turn completed the series.

H. F. & G. Witherby, the publisher of volumes 1 to 4, also produced the fifth volume, taking pains to use the same typesetting, paper and layout that had been used in previous volumes. In 1976, the last volume was finally published.12