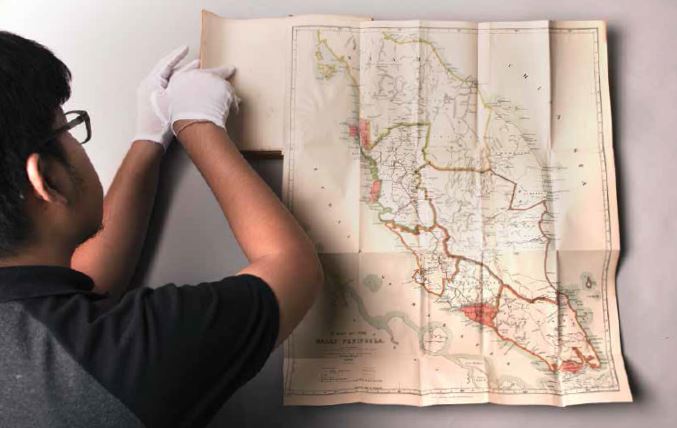 The first edition of the book included a coloured fold out map of British Malaya with the Straits Settlements (Penang, Malacca and Singapore) highlighted in pink and over 50 illustrations. All rights reserved, National Library Board, Singapore.

In the early 1900s, there were few authoritative resources that could provide an accurate picture of Malaya’s colonial history. That changed in 1906, when the book British Malaya was published.

Written by Frank Swettenham, the first Resident-General of the Federated Malay States (FMS), the book details the history of British presence in Malaya beginning with the Straits Settlements ports of Singapore, Melaka and Penang.

The National Library carries six copies of the first edition (with 1907 indicated as the publication year on the title page). Of these, four copies are in their original yellow covers. Two were donated by philanthropist and architect Koh Seow Chuan in 2007, and the other two come from the John Bastin Collection. 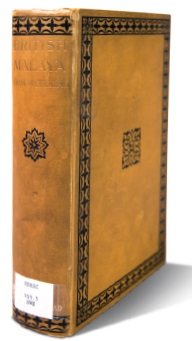 The first edition of British Malaya is bright yellow – a distinctive characteristic of Frank Swettenham’s books, possibly linked to his longstanding collaboration with his London publisher, John Lane. All rights reserved, National Library Board, Singapore.

As the official files of the Colonial Office were not accessible at the time, British Malaya remained the only reliable and accepted source of information on Malaya’s colonial history till the 1950s, exercising a profound influence over the historiography of Malaya and Singapore. Swettenham described the rise of Singapore as a “Clapham Junction of the Eastern Seas” as a consequence of Raffles’ foresight and the Federation of the Malay States which Swettenham helped shape. In so doing, he presented a unified history of Singapore and Malaya within the British empire.1

After retiring in 1904, Swettenham delivered a talk at the London School of Economics on colonial administration in Malaya where he lamented the lack of a textbook on this subject. He likely started writing British Malaya soon after, publishing it two years later.2

In the preface to the original edition, Swettenham stated that the aim of the book was to explain how the British came to be involved in the region. British Malaya consists of three parts: a history of the Straits Settlements and Britain’s formal possessions; a description of the FMS states under Britain’s indirect rule; and a comparison of the FMS’s progress with other territories in Malaya that were outside British protection. The book includes descriptions of landscapes, people, culture, commerce and governments, including biographical descriptions of the Malay rulers. It is also the first book to use the term Malaya “as if it were the name of a country”.3 Swettenham wrote from the point of view of an insider; someone intimately involved in the development of the FMS. Some scholars have commented that Swettenham recorded the role he personally played in the development of the FMS even as he was documenting its history.4 While others have questioned the veracity of some of his interpretations of events and people,5 British Malaya nevertheless remains as one of the canonical texts on the FMS.

The book includes detailed biographical descriptions of the Malay rulers. Photographed here are the Tunku Besar of Pahang, Sultan Abdulsamad of Selangor, Sultan Idris of Perak and the Yang di-Pertuan of Negeri Sembilan. All rights reserved, Swettenham, F. A. (1907). British Malaya: An Account of the Origin and Progress of British Influence in Malaya. London: John Lane.

The first edition of British Malaya was published with a coloured map of Malaya and over 50 illustrations. The cover is bright yellow – a distinctive characteristic of Swettenham’s books. British Malaya was distributed locally by Kelly & Walsh at $8.50 per copy.6 The book was widely read and went through several reprints and editions. Corrections and additions were made in the 1920, 1929 and 1948 editions.

In 1920, Swettenham added an appendix to the book in response to Cecil Clementi Smith’s pamphlet, Notes on Some of the Statements in Frank Swettenham’s Book “British Malaya”, which challenged Swettenham’s claim that he had proposed the FMS scheme. In the appendix, Swettenham provided documentary evidence that he had submitted a memorandum on the formation of the FMS to Smith, who in 1893 was the Governor of the Straits Settlements.7

Swettenham again revised the book in 1929 to include corrections and a new chapter “Twenty-years After” detailing the progress of the FMS. In 1948, a reprint edition was released posthumously by the publisher George Allen and Unwin. In the introduction, written two months before his death in 1946, Swettenham voiced his opposition to the formation of the Malayan Union.

Swettenham was born in 1850 in Derbyshire, England. He came to Singapore in 1871 as a civil service cadet and learnt Malay, passing his Interpreter’s examination just 15 months after his arrival. He was appointed Resident of Selangor in 1882, and later Resident of Perak in 1889, during which time he saw the need for a closer union among the British-protected states and proposed the formation of a federation.

The FMS was instituted in 1895 after Swettenham secured agreements from the Malay rulers. He served as its first Resident-General from 1896 to 1901. In 1897 Swettenham was knighted, and in 1901, reached the pinnacle of his career with his appointment as the High Commissioner of the Malay States and Governor of the Straits Settlements.8