A Battle Captured in a Map 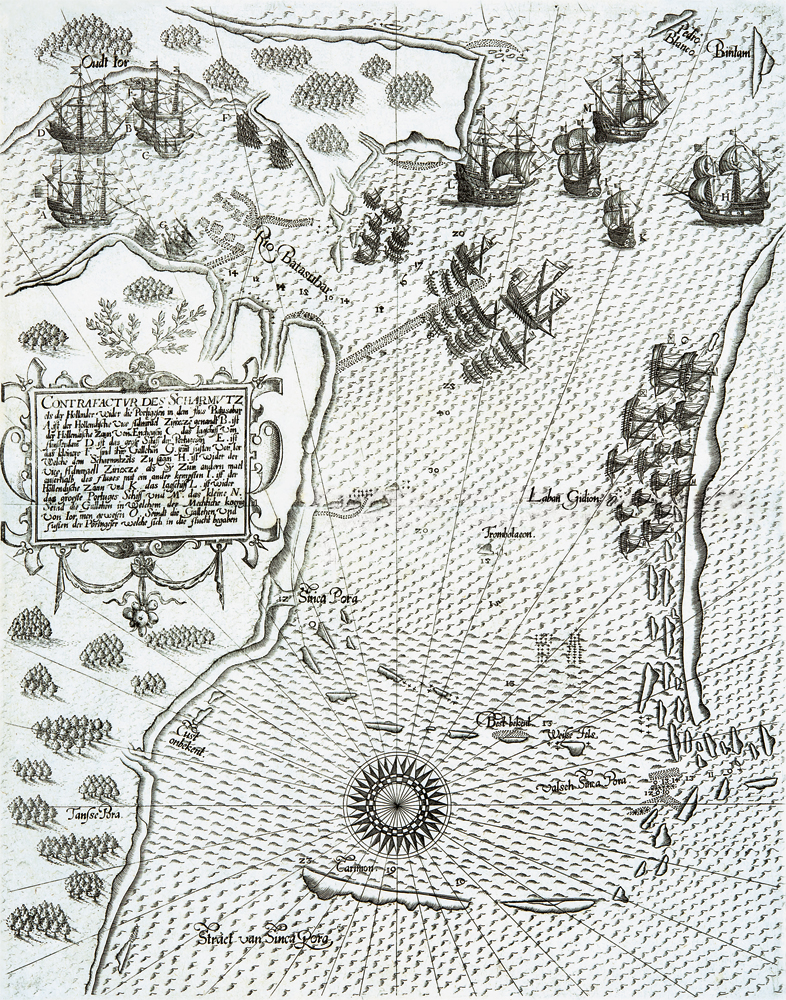 This 1606 engraved map by the de Bry family is one of the earliest in the National Library’s Rare Materials Collection that shows a distinct coastline of Singapore. Image source: National Library Board, Singapore.

For a tiny island known more for its skyscrapers than its sea-faring adventures, Singapore has a surprisingly bloody history. And while most of this history has been lost over time, one record that tells of a particularly ferocious battle between the Dutch and Portuguese armadas in the early 17th century is found in the National Library.

The 1606 engraving with a German title, Contrafactur des Scharmutz els der Hollender wider die Portigesen in dem Flus Balusabar, is one of the earliest maps in the collection that shows a distinct coastline of Singapore.

The map was created by the de Brys, who were a well-known Flemish family of cartographers, engravers and publishers based in Frankfurt, Germany. They were known for publishing accounts of foreign lands, including Theodor de Bry’s Grands Voyages and Petits Voyages, which covered 16th-century voyages and travels to the Americas, East Indies and arctic regions. After the death of Theodor, his sons, Johann Theodor and Johann Israel, continued to add on to the works of their father, which included the publication of this engraved map.1

Purchased in 2007, the map is roughly the size of one and a half sheets of A4 paper, and was originally published in a book. The map is a vivid depiction of a battle that occurred between the two European powers on the eastern coast of Singapore, off Pedra Branca, and along the north shore of Batam island.

The map itself has no title, except for a long description in German describing the various stages of the fearsome battle. Naval vessels are marked from A to O, with Roman numerals at several places in the sea marking the depth of the water. A compass rose is located above Carimon Island (Pulau Karimun in the Riau Islands of present-day Indonesia). The east and western entrances to the Tebrau, or Johor Strait, are marked as river estuaries, with the eastern portion of Pulau Ubin clearly visible.2 Other places shown in the map are Pedro Blanca (Pedra Branca), Bintam (Pulau Bintan), Oudt Ior (Johor Lama), and Rio de Batusabar (Johor River).

The description of the battle itself can be found from the cartouche description (on the middle left side) of the map that broadly corresponds to the more substantial account compiled by M. Gotthard Athus, an associate of the De Bry publishing house. It tells a riveting account of the battle fought in 1603 for the Dutch and Portuguese armies who wanted to expand their trading territories. Controlling these waters meant gaining unfettered access to the riches of the East.

Historians mark 25 February 1603 as the start of the bloody fray. On that day, the Dutch, with the help of their Johor allies, had earlier attacked and seized a Portuguese merchant vessel. In retaliation, the Portuguese blockaded the mouth of the Johor River to stop the trade and flow of supplies to the riverine towns and the capital, Batu Sawar, which were located further upstream.

When the Dutch discovered this several months later, they decided to help the Johor sultanate fight the blockaders. After forming an alliance with the Johor monarch ‘Ala’uddin Ri’ayat Shah II, the Dutch and Johorean ships led a successive wave of attacks against the Portuguese armada at the blockade on 6, 10 and 11 October 1603.

The first attack moved the Portuguese downstream; the second forced most of the crew to abandon their ships and escape to the northeastern coast of Batam. On the dawn of the third day, when the remaining men saw the Dutch fleet advancing on the horizon, they too fled.3

It was a resounding victory for the Dutch, which not only allowed the Johor monarch to reoccupy the river, but also cemented the alliance between the two parties. But in actual fact, the battle was not over.

Soon after the Dutch naval fleet left the river, the Portuguese reappeared. In the early months of 1604, the Portuguese attacked targets along the Johor River. It was not until May that year that the Dutch returned to help their besieged ally.4 Recognising the need to work together, the Dutch and Johoreans formalised their alliance in 1606 with the specific intent to wrest control of Melaka from the Portuguese. Though their combined attack failed that same year, it did lead to protracted Dutch attacks on Portuguese-held Melaka from 1606 for several decades until the port-city finally fell in 1641.5

For historians, the battle depicted on this map gives valuable insight into the origins and the development of Johor-Dutch relations in the early 17th century.6