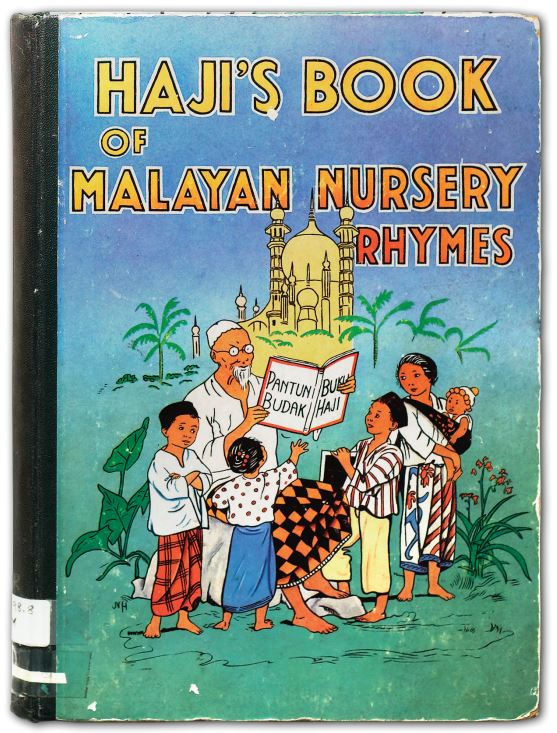 The cover of Haji’s Book of Malayan Nursery Rhymes features a group of Malay children listening to a storyteller (presumably the Haji), with a mosque and coconut palms in the background. Image source: National Library Board, Singapore

Many of us would recognise nursery rhymes such as “Mary Had A Little Lamb” and “Hot Cross Buns”, but reading Malay versions of these typically British children’s poems in a culturally misplaced context takes some getting used to.

A collection of whimsical nursery rhymes given a delightful Malayan spin is the subject of an illustrated compendium published in 1939. Titled Haji’s Book of Malayan Nursery Rhymes, the collection features Malay translations of 100 popular English nursery rhymes. To appeal to its readers, some words in the poems were replaced with local equivalents to give the translated versions a distinctly Malayan flavour.

The book is presented in a bilingual format, with the English nursery rhyme immediately followed by its Malay translation (some with accompanying music compositions by H. A. Courtney), and is interspersed with beautiful illustrations. The drawings mostly feature multi-racial characters and settings typical of the era. Additionally, the book contains a glossary of Malay words to help readers with a rudimentary knowledge of Malay to have a better understanding of its contents.

According to its writer, Arthur Wedderburn Hamilton, the impetus for his book was a pamphlet on “Malayan Nursery Rhymes” that was published for the Malaya-Borneo exhibition in 1922.1 A year later, the pamphlet was republished in book form by the Methodist Publishing House with “the added attraction of a few simple drawings by William George Stirling.2 Inspired by this, in 1939 Hamilton decided to “reissue [the rhymes] in an enlarged form and the bilingual method… to appeal to both the English and the Malay speaking portions of the youth of Malaya”.

Although Hamilton tried to preserve the purity and spirit of the Malay language in his book, he explained in his preface that the original meanings of the idioms were sometimes sacrificed in order to retain the original metre and “the exigencies of the rhyme”, while avoiding “a too classical a form of diction”.3

A 1985 review of the reprinted edition, however, criticised Hamilton’s sometimes awkward and inaccurate translations, presumably worded so that the rhyme structure of the original would not be compromised. Examples such as “Pussy-Cat Pussy-Cat, where have you been?” (“Cing, Cing, Kuching, mana engkau pergi?” ) in “Pussy-Cat Pussy-Cat” was cited, and how in “Ding Dong Bell” the phrase “What a naughty boy was that” is ungrammatically translated as “Apa punya jahat budak”.4

Hamilton tried to create Malayan settings in his translations, demonstrating his familiarity with places in Malaya and how people lived. The illustrations – all rendered by “the brush of Mrs Nora Hamerton” – for “Hot Cross Buns” (“Roti Manis Hangat”), for instance, features an Indian hawker selling bread, while the one for “Mary Had A Little Lamb” (“Mariam Ada Kambing Kecil”) shows a Malay girl leading a baby goat on a leash.

“There Was A Little Girl”(“Ada Satu Misi”) is accompanied by an illustration of a Chinese amah wearing wooden clogs, with a Caucasian girl holding a ball – reflecting a time when Chinese women were commonly employed as domestic helpers. The Peranakan (Straits-born Chinese) community is depicted in the nursery rhyme, “I Love Little Pussy [Cat]” (“Sahaya Sayangkan Kuching”), by way of a drawing of a little Peranakan girl stroking a cat perched on a ledge, while the girl’s mother or grandmother looks on, clad in a traditional nonya kebaya5 and beaded slippers. 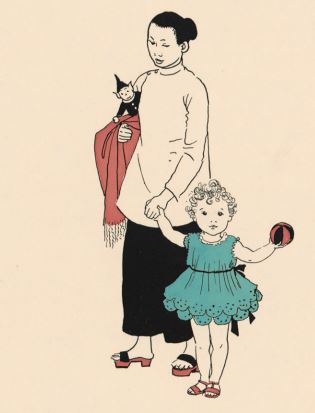 The nursery rhyme “There Was A Little Girl” (“Ada Satu Misi”) is accompanied by an illustration of a Chinese amah wearing wooden clogs, with a Caucasian girl holding a ball. All rights reserved, Hamilton, A. W. (1939). Haji’s Book of Malayan Nursery Rhymes. Singapore: Printers Ltd.

These local twists were well received: a newspaper reviewer at the time commented that “European children in Malaya who grow up to speak Malay and English equally fluently or equally hesitantly, should find delight in Mr A. W. Hamilton’s new book of Malayan nursery rhymes.”6 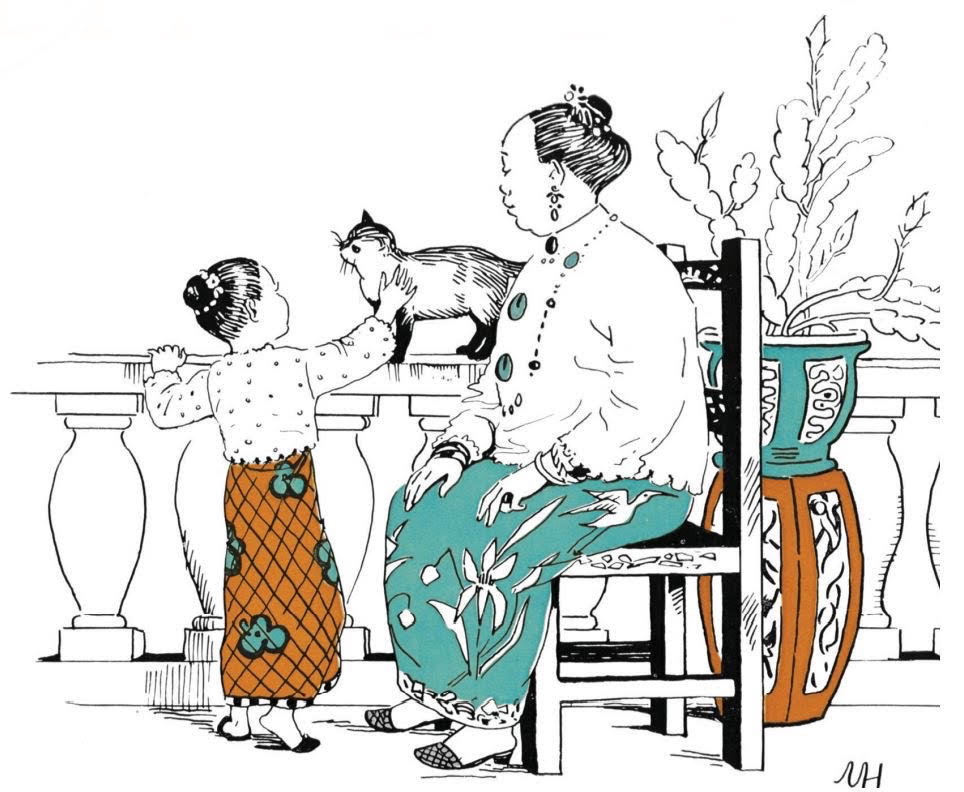 The Peranakan community is depicted in “I Love Little Pussy [Cat]” (“Sahaya Sayangkan Kuching”), by way of a drawing of a little Peranakan girl stroking a cat perched on a ledge, while the girl’s mother or grandmother looks on, clad in a traditional sarong kebaya and beaded slippers. All rights reserved, Hamilton, A. W. (1939). Haji’s Book of Malayan Nursery Rhymes. Singapore: Printers Ltd.

Although a prolific writer, little is known about Hamilton, except that he spent part of his life in Teluk Belanga, Penang, where he learnt Malay and became familiar with the “kampong” way of life.7 It was also reported that he used to serve in the Federated Malay States Police as an officer, and was also a linguist, botanist and author of several Malay text books.8

As indicated in the book’s preface, Hamilton published several other titles such as Easy Malay Vocabulary, Malay Sonnets, Malay Proverbs, Rubaiyat Omar Khayyam (a Malay rendition of Edward Fitzgerald’s English translation of poems by the Persian poet, Omar Khayyam), and Sang Lomri (a Malay translation of the European medieval tale Reynard the Fox).

The National Librar y’s copy of Haji’s Book of Malayan Nursery Rhymes bears a Raffles Library stamp dated 29 May 1940. The book was republished in 1947 by the Sydney-based Australasian Publishing, and again in 1956 by Donald Moore for Eastern Universities Press in Singapore. In 1985, Times Book International published a revised edition with a new title: Haji’s Book of Favourite Nursery Rhymes.