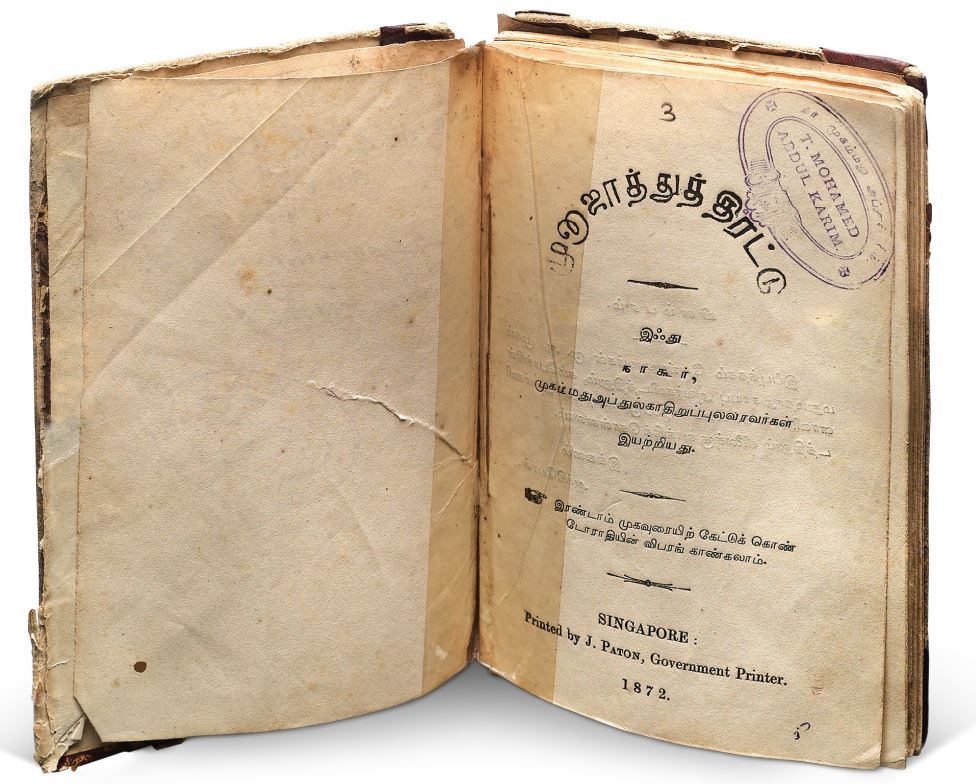 The title page of Munajathu Thirattu, the oldest Tamil book held by the National Library. It contains the name of the author, editor and publisher. Image source: National Library Board, Singapore.

The early Indian Muslims who settled in Singapore in the 1800s brought with them a varied heritage: their skills as shopkeepers and office workers, their unique customs and beliefs, and a tradition of devout poetry.1 Indeed, their religious faith was a key source of solace for these transplanted Muslims from the southern part of India, who often expressed their piety in the form of verse. One particularly notable poet among them was Muhammad Abdul Kadir Pulavar, whose Islamic religious poetry collection, Munajathu Thirattu, is the oldest Tamil book held by the National Library.

Published by J. Paton, Government Printer, in 1872, the book comprises a total of 55 poems and songs in praise of Muslim saints and the Prophet Muhammad. The verses are written in simple Tamil, richly overlaid with Persian and Arabic words, and are appended with tunes and rhythms. They are divided into six genres: introductory poems in praise of the author (four poems); Munajathu Pathikam (four songs); Thanippaakkal (12 poems); Thanippathangal (30 songs); Sindhu, a lyrical form of Tamil (two poems); and Chitirak Kavi, graphical poems in which the letters are drawn in such a way that they resemble the shape of snakes, chariots and other pictographs (three poems).

The collection takes its name from the Arabic word munajat – meaning a private and intimate talk with Allah – which is derived from the terms yunaji or najawa, meaning “talking in secret”. The word najawa in turn has its roots in najah, which means “deliverance” or “salvation”. Hence, the book’s title conveys the meaning of “supplication for the repentance of sins”. Its poems glorify God and offer humble prayers in the form of simple but expressive verses.2

Among them is a song written in praise of Sikkandar Sahib Oli, better known as Sultan Iskandar Shah, who is believed to be the last of five kings to rule over 14th-century Singapore. A descendent of Sang Nila Utama (the legendary founder of Singapore who predates Stamford Raffles), Iskandar Shah is supposedly buried in a terrace on the northern side of Fort Canning, a spot which has since become a holy place of worship.3 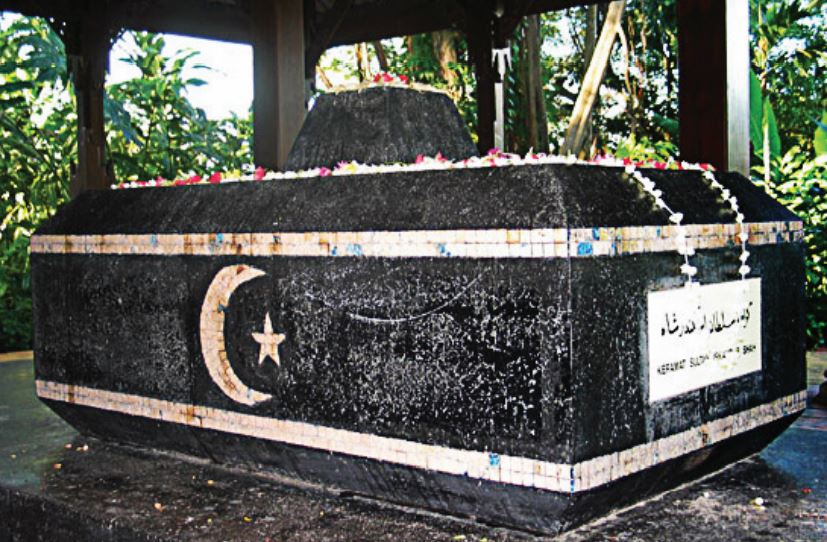 Among the poems in this book is a song written in praise of Sikkandar Sahib Oli, better known as Sultan Iskandar Shah, who is believed to be the last of five kings to rule over 14th-century Singapore. Iskandar Shah is supposedly buried in this tomb found on a terrace along the northern side of Fort Canning. All rights reserved, National Library Board, Singapore, 2004.

Munajathu Thirattu is also noteworthy as evidence of the island’s tolerant multiracial character from as early as the 1800s. Although this is an Islamic religious poetry collection, we see a beautiful introductory poem by the well-known Hindu poet C. V. Narayanasamy Nayagar, who was also the teacher of the book’s author Muhammad Abdul Kadir.

Tamil and Malay journalism in Malaya owe their origins to “locally born Indian Muslims in Singapore, or to be more exact, the community known as “Jawi Peranakan” according to Southeast Asian scholar William Roff.4 The Jawi Peranakan group in Singapore owned a few presses and published Tamil newspapers and books.5

Also among the Jawi Peranakan community was philanthropist Makathum (also spelled as Makhdum) Sahib bin Ghulam Mukhyuddin Sahib, who together with Muhammad Abdul Kadir, founded a newspaper in 1875.6 The paper, Singai Vardhamani – also called Singavartamaney or Singapore Commercial News – earned a place in history as the earliest known Tamil newspaper in Singapore. According to a description in the Straits Times Overland Journal, the tiny foolscap paper-sized newspaper was neatly printed in clear type and included fine content selections, short editorials and listings of weekly prices and bank exchange rates.7 Makathum Sahib, who owned the Denodaya Venthira Press, also ran another newspaper called Singai Nesan in the late 1880s. He encouraged writers in their work and published their creative efforts himself.8

Not much else is known about Muhammad Abdul Kadir, save that he was the son of P. Muhammad Muhayatheen Sahib from Nagore, in Tamil Nadu, India, and that he studied under the aforementioned C. V. Narayanasamy Nayagar. According to a brief note in the publication Malasiya Tamil Kavitaik Kalanjiam,9 Narayanasamy was known as “Cingapur Chithira Kavi”, which implies he was famous for writing graphical poems. 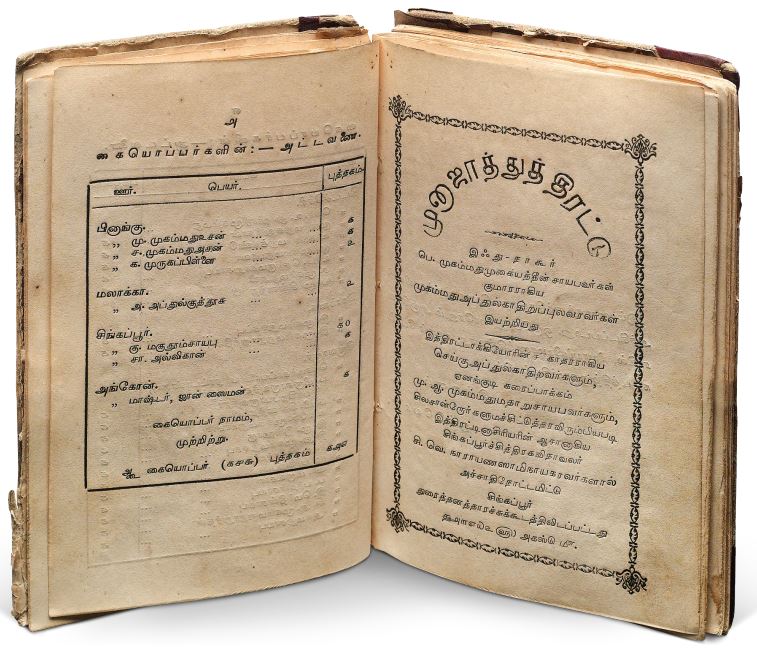 A more detailed title page with additional information stating that the author Muhammad Abdul Kadir is the son of P. Muhammad Muhayatheen Sahib from Nagore, Tamil Nadu, India, and that he studied under C. V. Narayanasamy Nayagar. Image source: National Library Board, Singapore.

The National Librar y’s copy of Munajathu Thirattu was purchased in 2005 from Jaffar Mohideen, an Islamic scholar, writer, poet and journalist, who also came from the same Indian hometown of Nagore as Muhammad Abdul Kadir.