A Glimpse of 1930s Singapore 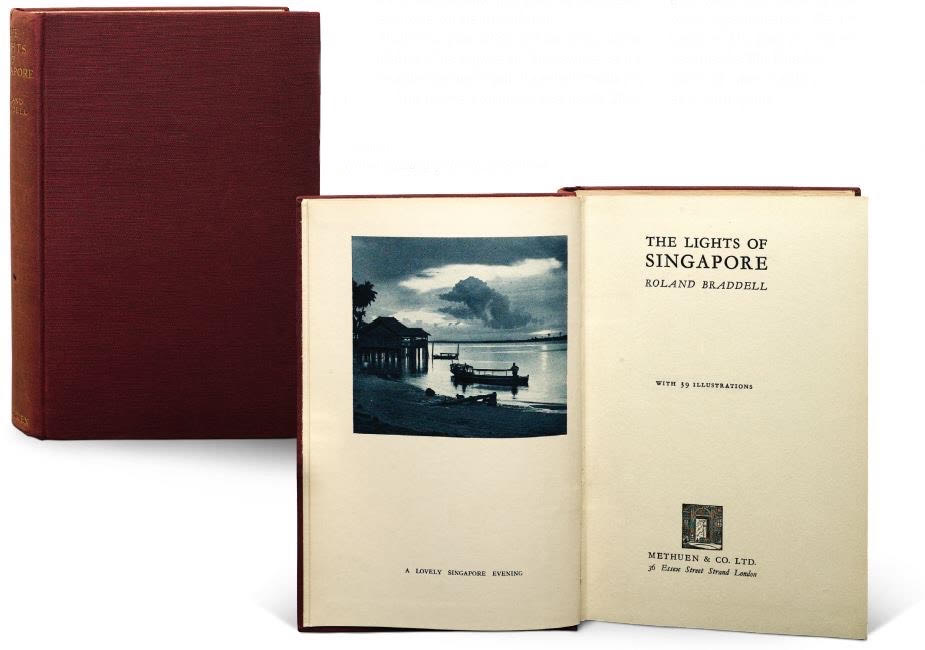 The frontispiece of The Lights of Singapore features a seaside view of Singapore at dusk. Image source: National Library Board, Singapore.

Imagine reading this about Singapore in a travel guide: “one of the cesspools of the world”, a place with “no ancient history, no romantic background”, “a paradise for second-class people”, a city with “wild night-life and opium dens”, and having a “terrible climate” that causes “bad health”.1

An erudite Singapore-born Englishman who disagreed with these swipes about the island felt compelled to write a book and debunk prevailing Western impressions of his birthland.

Published in 1934, Roland St. John Braddell’s The Lights of Singapore is an informative but yet light-hearted insider’s look at life in the colony in the early 20th century. Written between April and November 1933,2 the book was mainly targeted at Westerners but its engaging tongue-incheek style won many more readers over, its first print run of 500 copies selling out in only four days.3 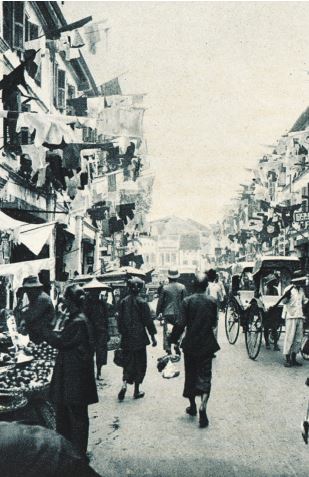 The book distinguished itself from other expatriate traveller accounts of the day because it was written entirely from the point of view of a local – albeit one who was clearly white and from a privileged class.4 As one reviewer so succinctly put it: “to many European residents Mr Braddell has given a new pair of spectacles through which to see Singapore”.5

The book does not lend itself to easy categorisation into a single genre. It reads as a fact book on Singapore, a travel guide to places of interest, a history book on its pre-colonial past, and a collection of anecdotal stories and observations on the quirks and foibles of life in 1930s Singapore.6

Despite the fact that the book was written during the years of the Great Depression (1929–39), it adopted an exuberant tone in painting Singapore as a picture of progress and modernity, with its new railway station, motor cars, large buildings, massive land reclamations, and a new airport under construction in Kallang.

Braddell also described the different facets of cultural life in Singapore, from the religious rituals practised by locals to the entertainment found in the colony, including Hollywood movies and grand parties where multicultural cuisines were served. Colourful depictions of the people, from Hailam (Hainanese) servants to rickshaw pullers complete his portrait of a charming and complex city that was fast becoming a glittering emporium of the East.

Braddell also praised Singapore for being one of the few places that had “large surpluses, little public debt, [and] low taxation”. One of the astute observations he made in the book was that the island had an “outward modernity” that was underpinned by “age-old beliefs and ancient superstitions”.7 He also wrote of the perennial complaint by locals on Singapore’s lack of culture, a not unfamiliar rhetoric that still exists in contemporary Singapore.

The Lights of Singapore was published in London in July 1934, and sold for $3.50 a copy. The book includes 29 plates of photogravure8 on places of interest in Singapore and Malaya, most of which were taken by Nakajima & Co., a popular photo studio located at the Raffles Hotel.

To boost publicity, the book was advertised as “a new book presenting the romance and history of Malaya”, “suitable for sending home”, “full of lore and reminiscence, which will delight those who know something of this portion of the world”, and one that creates “an intimate picture of Singapore” while bringing out “the romance and history of that city as well as Malaysia generally”.9

Those stirring descriptions worked. A second edition was released the same year in September, and a third edition, with revisions and corrections, was published the following year. The fourth and fifth editions were released in 1939 and 1941 respectively. In all, the book sold about 5,000 copies before World War II (1942–45), making Braddell one of Malaya’s most popular authors.10 Subsequent editions were published in 1947, 1966 and 1982, the latter two by Oxford University Press.

The National Library has four copies of the first edition of the book published in 1934. The first was donated by R. Ramachandra, then principal of Teck Whye Secondary School, on 22 May 1981. It carries a handwritten dedication from Braddell to a friend (whose name is not legible) with the message, “My old friend, with deepest esteem”. 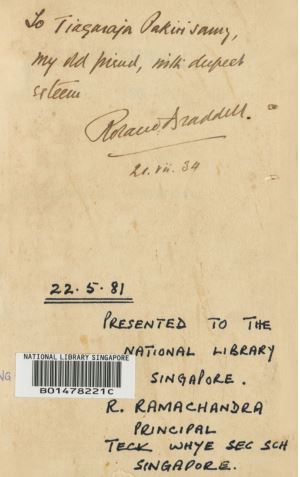 The National Library has four copies of the first edition of The Lights of Singapore published in 1934. The first, donated by R. Ramachandra, the then principal of Teck Whye Secondary School, on 22 May 1981, carries a handwritten dedication from the author Roland St. John Braddell to a friend. Image source: National Library Board, Singapore.

The second and third copies were donated to the library by the late Mr Lee Kip Lin, an architect and author of several architectural books on Singapore and Mr Koh Seow Chuan, founder of DP Architects. The fourth copy comes from the John Bastin Collection. 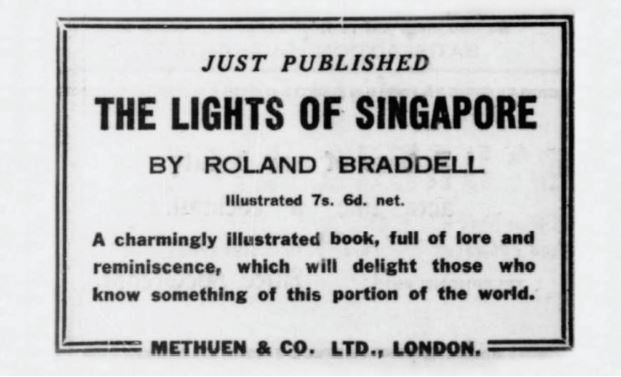 A Straits Times advertisement of the book on 22 July 1934. The Lights of Singapore is so popular that it has been republished several times since it was first printed © The Straits Times.

WHO WAS ROLAND ST. JOHN BRADDELL? 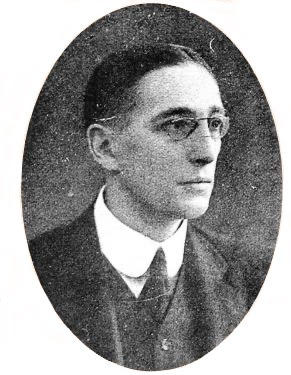 Roland St. John Braddell (1880–1966) was a prominent lawyer who contributed much to the public life of Malaya. The third generation of Braddells to settle in the region, he was the eldest son of Thomas de Multon Lee Braddell, Chief Justice of the Federated Malay States (1913–17);11 and grandson of Thomas Braddell, the first Attorney-General of the Straits Settlements (1867–82).12

Braddell was born in Singapore on 20 December 1880. He received his education at King’s School, Canterbury, and Worcester College, Oxford, where he obtained his Bachelor of Arts degree in 1904. He was called to the Middle Temple Bar in 1905, and the Straits Bar the following year. Braddell then practised at Braddell Brothers, the law firm established by his father and uncle, Robert Wallace Glen Lee Braddell.13

In April 1936, Braddell was appointed an unofficial member of the Johor Executive Council for a period of two years by the sultan of Johor. He served as legal advisor to the United Malays National Organisation, played an instrumental role in the negotiations that led to the establishment of the Federation of Malaya in 1948 and had a hand in drafting the federation agreement. Thereafter, he continued to serve as legal and constitutional advisor to the rulers of the Malay States.14

Legal achievements aside, Braddell was also known as a scholar of Malayan history. He was one of three editors – including Walter Makepeace and Gilbert Edward Brooke – of Singapore’s centenary celebration publication, One Hundred Years of Singapore (1921). He also wrote several legal and history books, including Commentary on the Common Gaming Houses Ordinance of 1888 (1911), The Law of the Straits Settlements: A Commentary (1915) and The Lights of Singapore (1934). In addition, Braddell had many of his papers published in the Journal of the Malayan Branch of the Royal Asiatic Society.15

In July 1951, Braddell left Singapore but returned to Kuala Lumpur two years later to start up his legal practice there. He played a part in the establishment of the law faculty in the University of Malaya in Singapore through the recommendations he made in the Allen-Braddell report of 1955.17 He retired to England in 1960, and died in London on 15 November 1966.18