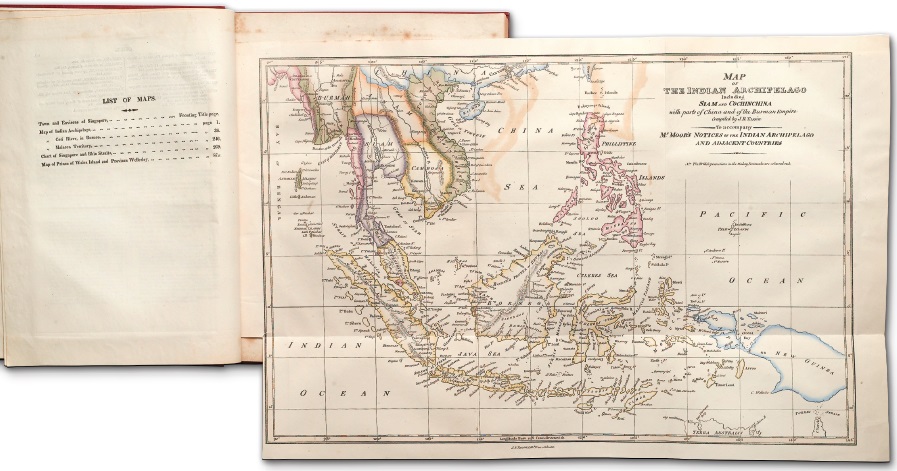 By John Henry Moor’s reckoning, the book he published in December 18372 was beset with failures. Notices of the Indian Archipelago, and Adjacent Countries had been intended as the first part of a magnum opus that the Singapore newspaper editor had grandly announced in 1835. Moor’s goal was to print a massive compendium comprising two volumes: one compiling reprints of articles first published in the Singapore Chronicle newspaper from 1824 to 1834, and a second volume featuring papers on key topics about Singapore and Southeast Asia.

But due to the scarcity of printers and paper in early Singapore, Notices, the first volume, took two years to complete. The 400-page volume included six maps, five coloured in outline, that had to be lithographed in Calcutta, India, which contributed to the delay in its publication. Moor later lamented that the tome was “far from producing satisfaction” due to its “wanting arrangement”: the earlier articles were arranged by geography, but later contributions had to be inserted into the appendix.

The finished product was priced at six Spanish dollars, and five Spanish dollars for subscribers of the Singapore Free Press, the island’s other English-language daily, where Moor was sub-editor. The price, though, barely covered the cost of producing the maps. Poor sales, combined with high production costs, caused Moor to incur such heavy losses on Notices that he was not able to proceed with his second volume.

Still, Notices has claimed its place in history as a valuable record of Singapore’s early years and is one of the first books published on the island. It curates studies on the Indian archipelago – present-day Indonesia, East Malaysia, Brunei, the Philippines, East Timor and Singapore – that were republished from newspapers or journals, including many from Singapore Chronicle, Singapore’s first English newspaper. Moor was a former editor3 of the Chronicle, of which no known copies from 1824 to 1826 remain;4 his publishing project therefore preserved some precious articles that would otherwise have been lost forever.

One such article is an account of John Crawfurd’s formal possession of Singapore and its adjacent islands in 1825. Crawfurd, who was appointed Resident of Singapore in 1823, set off in August 1825 on a 10-day journey around Singapore on his ship the Malabar and landed at Pulau Ubin. There, the British flag was hoisted and the 21-gun salute fired as part of the ceremonial proceedings. The account also includes Crawfurd’s notes on Singapore’s outlying islands and Bukit Timah Hill; these are all documented in “Journal of a Voyage Round the Island of Singapore”, one of six articles in the volume of direct relevance to Singapore. 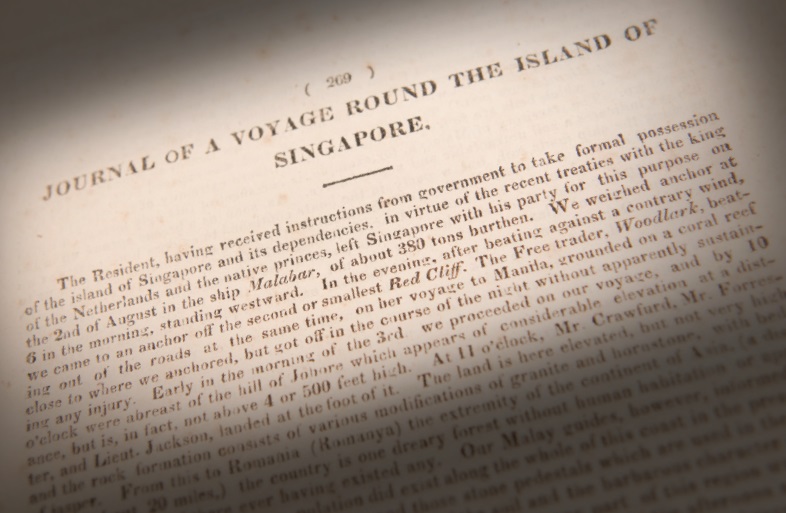 “Journal of a Voyage Round the Island of Singapore” gives an account of John Crawfurd’s formal possession of Singapore and its adjacent islands in 1825. All rights reserved, National Library Board, Singapore.

Two others – “Treaty between the Britannic and Netherland Governments, March 1824” and “Outline of Political Relations with the Native States on the Eastern and Western Coasts, Malayan Peninsula” – detail two crucial agreements, the Anglo-Dutch Treaty (17 March 1824) and the Treaty of Friendship and Alliance (2 August 1824), which firmly established Britain’s sovereignty over Singapore. 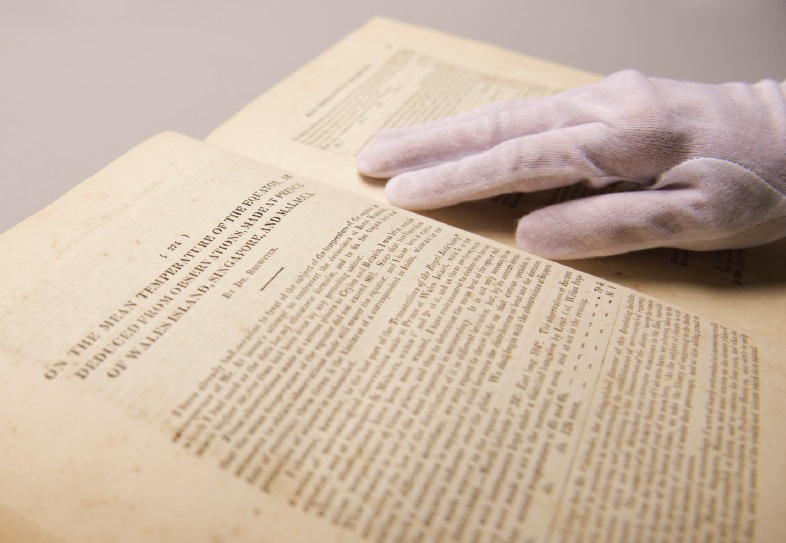 The article “Treaty between the Britannic and Netherland Governments, March 1824” lists the terms of the Anglo-Dutch Treaty signed between the British and the Dutch on 17 March 1824. All rights reserved, National Library Board, Singapore.

Notices was not Moor’s only unprofitable endeavour. A firm advocate of reading, he acquired books from London and sold them in Singapore, Java and China, incurring losses in the process. Moor was also a one-time headmaster of the Singapore Free School, which went on to become Raffles Institution. Born in Macau in 1802 and educated in Ireland, Moor moved to Singapore from Malacca in December 1829, after the Malacca Observer newspaper he founded was shut down for expressing views that differed from the government’s.

Moor was appointed editor of the Singapore Chronicle from 1830, and the newspaper flourished under his editorship. In September 1835, he resigned to become the sub-editor of the newly formed Singapore Free Press, staying with the paper for two years. Moor died on 1 May 1843, six years after he published Notices; he was only 40 years old.5

Notices was displayed at the second annual book exhibition held at the Victoria Memorial Hall in October 1948, where it was erroneously touted as “Malaya’s first printed book”.6