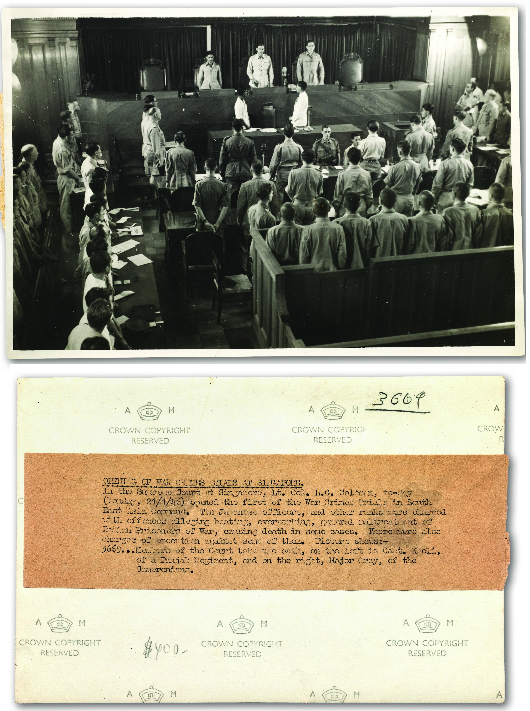 Opening of the War Crimes Trials held in Singapore on 21 January 1946. This photograph was shot by an unnamed British Crown photographer. All rights reserved, National Library Board, Singapore.

A 1946 photograph from the opening of the War Crimes Trials held in Singapore1 is a grim reminder of the atrocities committed by the Japanese during the Japanese Occupation of Singapore (1942–45) – a dark period in Singapore’s history.

The photograph shows members of the court taking an oath. The men in the back row with shaven heads were the first group of Japanese soldiers to be tried in the first of 131 trials held between 21 January 1946 and 12 March 1948.2

The trials carried out in Singapore were part of the international War Crimes Trials conducted after World War II, the most famous of which was held in Nuremberg, Germany, to bring Nazi war criminals to justice.3 Internationally, these courts were known for establishing new standards of international justice and rights.

The reverse side of the photograph bears the watermark of the Crown symbol of the British monarchy and the words “Crown Copyright Reserved”, an indication that the picture must have been taken by an official Crown photographer.

The Singapore trials were held in the Supreme Court building on St. Andrew’s Road. The first trial, depicted in the photograph, lasted from 21 January to 1 February 1946, and involved 10 Japanese guards from a prisoner-of-war camp on the island of Pililiou (also spelt as Peleliu), in Palau, Micronesia.4 They were accused of ill-treating 520 Indian prisoners under their charge, resulting in the deaths of 118, including one who was beheaded.5 One of the guards, Lieutenant Nakamura Kaniyaki, was sentenced to death for beheading the prisoner. Seven of the other defendants were given prison terms ranging from two to 12 years, while two were acquitted. Lieutenant Colonel Leon George Coleman was President of the Court for this trial and several other war crimes trials in 1946.6

The trial featured in the photograph was just one of many held at the time. Trials were also conducted for those involved in some of the worst atrocities committed during the Japanese Occupation. The most notorious of these trials was the one that prosecuted those involved in Operation Sook Ching, a military exercise aimed at purging anti-Japanese elements from the Chinese community in Singapore between 21 February and 4 March 1942.7

The counsels for the accused making their defence at the Sook Ching Massacre Trial held at the Victoria Memorial Hall in 1947. Tham Sien Yen Collection, courtesy of National Archives of Singapore.

While there were several separate trials for Japanese soldiers involved in Operation Sook Ching, the main trial was held from 10 March to 2 April 1947 with seven Japanese officers charged with planning and executing the killings. All the officers were found guilty with Lieutenant-General Kawamura Saburo, garrison commander of Singapore Town, and Lieutenant-Colonel Oishi Masayuki, the Kempeitai (Japanese military police) commander, sentenced to death. The other five officers received life sentences.8

Although the number of people executed in Operation Sook Ching remains unknown and estimates vary widely, the most common figure quoted is that given in an affidavit by Lieutenant-Colonel Hishakari Takafumi, a newspaper correspondent at the time, who claimed that the plan was to kill 50,000 Chinese and that half that number had been reached when the order was received to stop the operation.9

Another trial that took place in Singapore was the “Double Tenth” trial held from 18 March to 15 April 1946 involving 21 Japanese soldiers and interpreters accused of torturing and killing prisoners interned at Changi Prison. The Double Tenth incident was the result of Operation Jaywick, during which six Japanese oil tankers docked at Keppel Harbour were blown up on 27 September 1943. Suspecting that prisoners at Changi Prison were responsible, the Kempeitai, or Japanese military police, raided the prison on 10 October 1943 and discovered a wireless set hidden there. As a result, 57 internees were tortured and interrogated over several months, leading to 15 deaths.10