Singapore’s Role in the Chinese Revolution 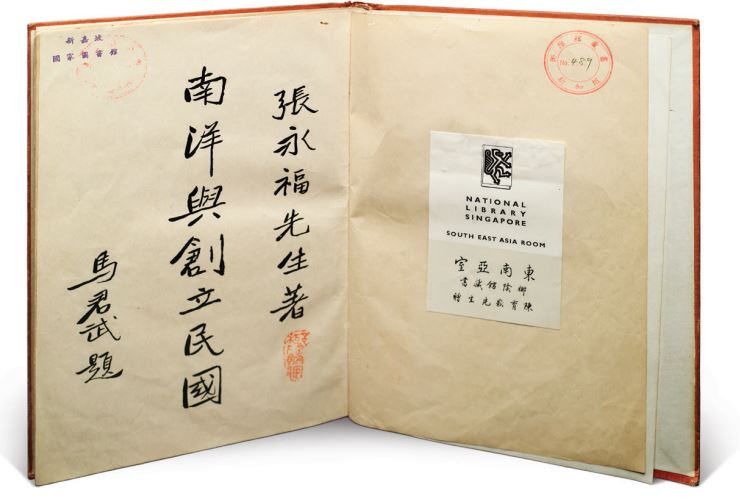 Title page of Nanyang and the Founding of the Republic in Chinese characters on the left with the donor label on the right. The book was donated by Tan Yeok Seong – a Penang-born merchant and a historian of Southeast Asian history – to the National Library in 1964. This and his other donations form part of the Ya Yin Kwan Collection. Image source: National Library Board, Singapore.

When the Chinese revolutionary leader Sun Yat-sen set in motion his plans to overthrow the Qing dynasty in China and establish a new republic in the early 20th century, he found an ally in Singapore.

Teo Eng Hock1, a merchant and rubber tycoon, was a close friend of Sun and one of the founding members of the Singapore branch of the Tongmenghui (同盟会; Chinese Revolutionary Alliance), an underground resistance movement founded in 1905 by Sun to gather support for the Chinese revolutionary cause and raise funds for its activities.2 As Sun’s close comrade, Teo, who was once known as Singapore’s “rubber king”,3 had intimate knowledge of the revolutionary activities that were taking place, especially in Singapore.

Over the nine years that Teo spent as a member of Tongmenghui, he kept about 100 letters and memos relating to the resistance movement. These letters, along with other receipts, documents and photographs, are documented in a Chinese book that he wrote and published in 1933.

Titled Nanyang and the Founding of the Republic (南洋与创立民国), the publication – with 57 sections and close to 50,000 Chinese characters4 – contains first-hand accounts and primary materials on the involvement of the overseas Chinese in the 1911 Chinese Revolution,5as well as Singapore’s role in Sun’s campaign to end more than 2,000 years of imperial rule in China.

Teo also shares his own experience in establishing the Singapore branch of the Tongmenghui, and describes the involvement and sacrifices of the Nanyang Chinese in various uprisings in China.

Part of the Ya Yin Kwan Collection donated by Tan Yeok Seong to the National Library in 1964, the book is likely one of a few extant copies. During the turbulent years after World War II, many people who had copies of the book either destroyed or kept them secretly to evade persecution.6

As the book contains many rare, firsthand accounts and primary materials of Sun’s activities, it serves as a valuable resource to those researching the Chinese revolution and its impact on the overseas Chinese community – for example, how 600 revolutionaries sought refuge in faraway Singapore after the failure of the 1908 Hekou Uprising in Yunnan province.8

Readers will also learn that it was in Singapore that Sun, together with other Tongmenghui members, discussed the design of the Chinese republic’s future national flag. Interestingly, it was Teo’s wife who embroidered the four draft designs of the flag, and an image of the embroidery can be found in the book.9 Also featured is Tongmenghui’s constitution – drafted in Singapore – which became the model for other branches in Southeast Asia.10 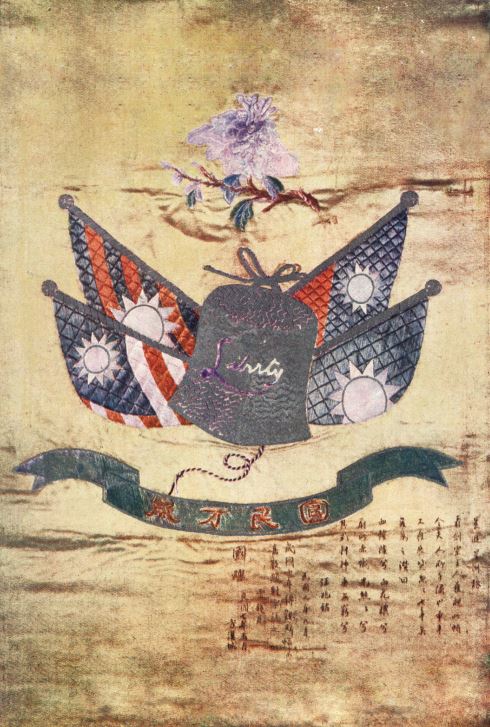 But of all the records in the book, the most significant are perhaps the five photographs of Sun taken during his visits to Singapore. These photographs are valuable because there were few such pictures of Sun and his activities,11 which were deliberately kept secret so that he could evade detection by the British colonial government as well as assassins hired by the Qing government.

The five photographs suggest the close friendship between Sun and Teo. One picture (see image below), captioned “Prior to the establishment of Tongmenghui”, shows Sun (centre) with Teo (left) and Tan Chor Lam, Teo’s business partner.12 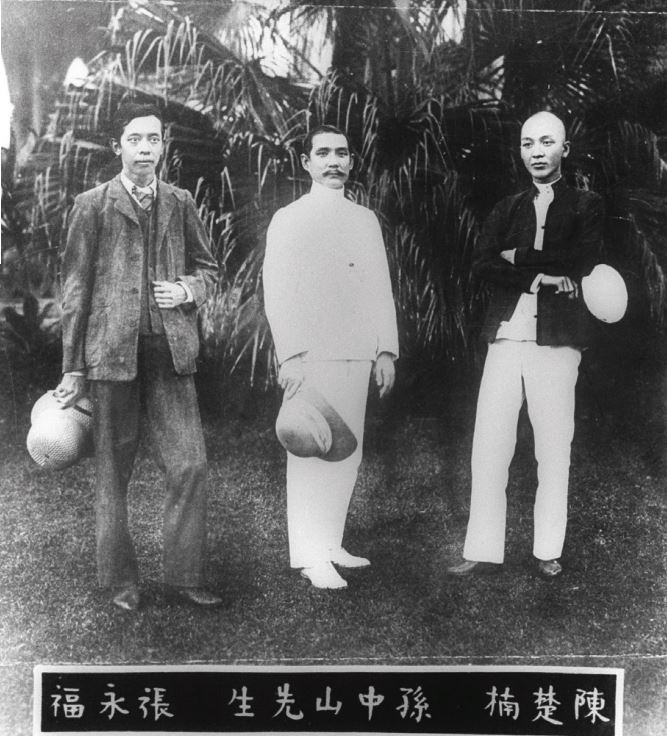 From the left: Teo Eng Hock, Sun Yat-sen and Tan Chor Lam. Both Tan and Teo were founding members of Tongmenghui, an underground resistance movement founded in 1905 to support Sun’s revolutionary cause. This photograph was taken at Sun’s residence in Singapore at 12 Tai Gin Road in 1906. Courtesy of National Archives of Singapore.

Another photograph, “Establishment of Tongmenghui a few days later”, shows Tongmenghui’s core members, including Teo, Tan, and Lim Nee Soon (Teo’s nephew), at a ceremony held at a villa13 which Teo bought in 1905 and became Sun’s residence during his third visit to Singapore in 1906.14The villa, at 12 Tai Gin Road, in the Balestier area, was called Wan Qing Yuan (晚晴园), or Serene Sunset Garden, to “symbolise peace and happiness in old age”.15 It eventually became the base for the local Tongmenghui as well as the alliance’s headquarters in Southeast Asia.16

In the late 1930s, Teo left Singapore to join the Chinese Affairs Committee in Nanjing, before settling down in Hong Kong. He died there in 1959, aged 88, after a brief illness.17

In 2013, Teo’s book was reprinted in conjunction with an exhibition commemorating the contributions of the six Chinese merchants in Singapore, including philanthropist Lee Kong Chian, who bought Sun’s villa in 1937 to preserve its illustrious history.18 In this reprint, the original text, which was set in traditional Chinese characters, was replaced by simplified Chinese.