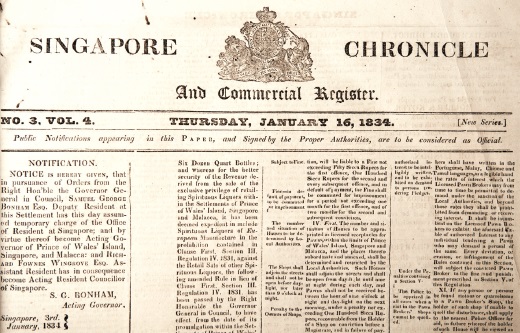 The Singapore Chronicle – the city’s first English newspaper – was first published on 1 January 1824, with Francis James Bernard as its first editor. However, the earliest issue in the National Library’s possession is dated 3 January 1833. All rights Reserved, National Library Board, Singapore.

Long before the advent of modern communications and transportation systems, merchants in 19th-century Singapore relied on the humble newspaper to track shipping arrivals and departures. As the movement of cargo, people and mail was key to the island’s rise as a maritime port, the Singapore Chronicle‘s chief task was to disseminate commercial information and news.1

Singapore’s first broadsheet was published on 1 January 1824,2 five years after the British set up a trading post in Singapore. It was Francis James Bernard, the Assistant in the Police Department and son-in-law of Singapore’s first Resident, William Farquhar, who made the original application to publish a commercial newspaper in July 1823.3

Bernard’s idea for a newspaper was endorsed by John Crawfurd – Farquhar’s successor as the British Resident – who believed the newspaper would “contribute to the utility and respectability” of Singapore.4

Bernard was appointed as the first editor of the Singapore Chronicle but resigned on 9 February 1824 after a quarrel with Crawfurd.5 In the initial two years of its existence, Crawfurd was the principal contributor to the newspaper, and under his supervision, the newspaper became a semi-official gazette.6

Commercial information aside, the newspaper also included official notifications, advertisements, editorial notes on local topics and events, news about other countries, articles or letters from correspondents, and listings of imports and exports. It also re-published news from the Prince of Wales Island Gazette and the Malacca Observer as well as from other Bengal and English newspapers.7

Government notices typically appeared on the first column, at the top of the front page. For this dedicated space, the editor of the newspaper received a regular fixed subsidy of 60 Spanish dollars per month from the government until 1829, when the subsidy was withdrawn in order to save costs.8

The Singapore Chronicle was published once a fortnight on Thursdays. It was initially printed on a single sheet of rough, Chinese-made paper and folded once to make four quarto pages, each with three columns of type. The paper later expanded to five or six pages, and became a weekly paper in 1830.9

From mid-1826 onwards, a separate complementary single-sheet weekly paper, Commercial Register and Advertiser, was published on Saturdays containing the list of imports and exports during the week, current prices of foreign markets, advertisements as well as shipping information. It was sold at half a Spanish dollar per month to subscribers and 25 cents per issue to non-subscribers.10

Early editions of the newspaper were printed by the Mission Press. Later, the newspaper ran its own printing press, the Singapore Chronicle Press, located at 26 Commercial Square (present-day Raffles Place).12

The Singapore Chronicle was subject to a gagging act which was introduced in 1823 in response to certain critical articles that had been published in English-language newspapers in India to embarrass the British government.13 The act required all newspapers in the British colonies to be licensed and submitted for vetting before publication. In addition, all articles that criticised the British East India Company, and government officials and policies were banned.14

As a result, in some issues, questionable paragraphs and articles were removed, leaving large blank spaces with a series of stars printed on them to indicate that content had been deliberately removed and that it was not due to a printing error.15

Unfortunately, the National Library does not have the earlier issues of the Singapore Chronicle. The earliest issue found in the library’s collection is dated 3 January 1833. However, a collaboration with The British Library has made issues from 1827 accessible in NewspaperSG.