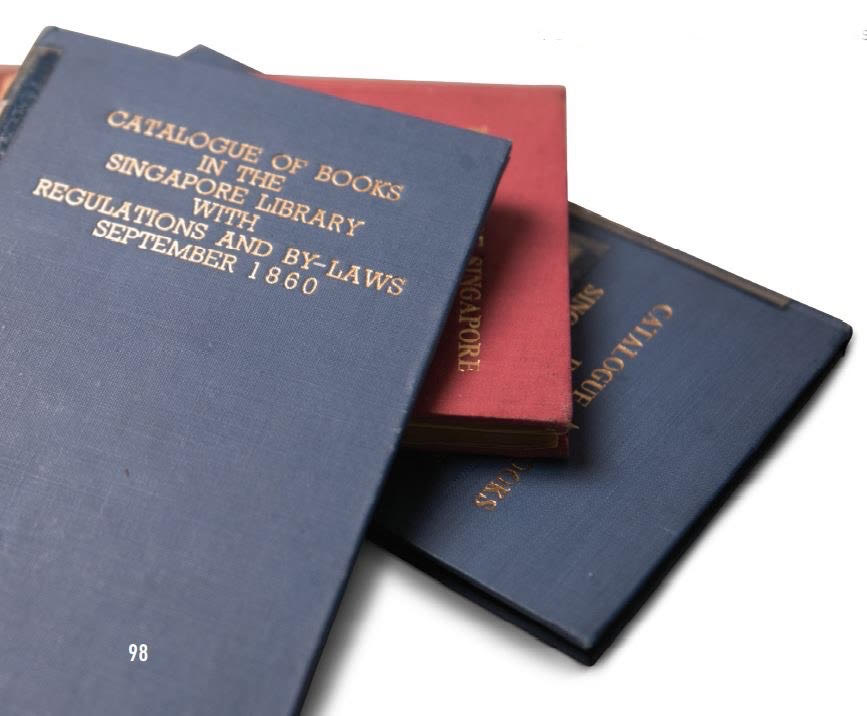 People visit the library for various reasons, not least of which to read and look for information on interesting subjects. But what if the subject is the library itself?

The origins of the Singapore Library can be traced to a meeting in 1823 when Stamford Raffles outlined his plans for the establishment of a library within the Singapore Institution, today known as the Raffles Institution. The public could access the library – which opened in 1837 as part of the school – for a small fee, but as its popularity grew, there were calls for the library to open after school hours. Therefore, on 22 January 1845, the Singapore Library was established – the island’s first subscription-based public library.1 The 1845 publication is the library’s first annual report. 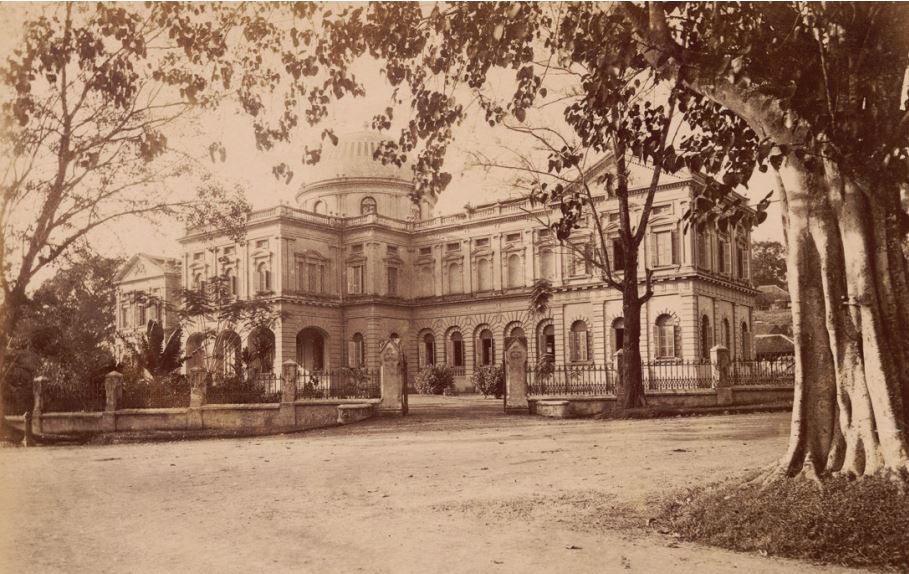 This 1890s photograph by G. R. Lambert & Co. shows a view of the original 1887 front block of the Raffles Library and Museum at Stamford Road. Today, the neo-classical building houses the National Museum of Singapore. Lee Kip Lin Collection. All rights reserved. Lee Kip Lin and National Library Board, Singapore 2009.

In addition to membership details, the report also contains information on the collections of the library,the by-laws, including its opening hours, and the fines payable for overdue and lost materials. Each member could only borrow one book and one periodical at atime for anywhere between two and 14 days, depending on the type of item and whether it was a new title.6 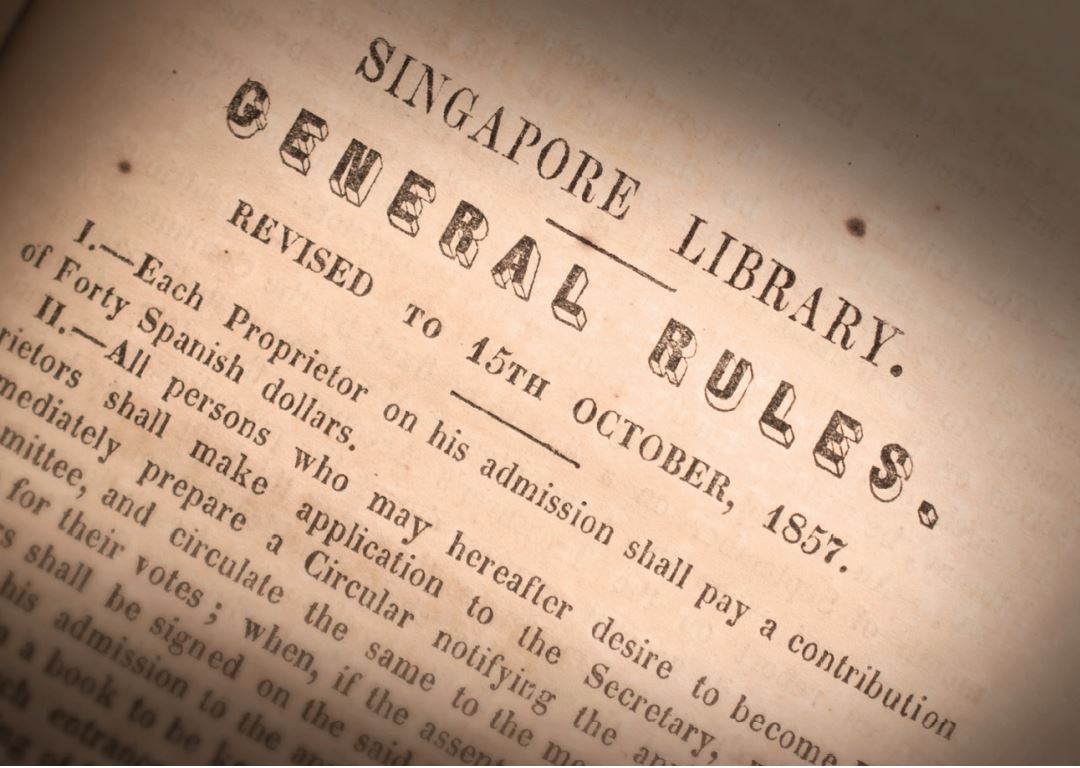 The Singapore Library started with three levels of membership. The most expensive category was for shareholders, who paid an entrance fee of 40 Spanish dollars and a monthly subscription of two Spanish dollars. Image source: National Library Board, Singapore.

From just 617 volumes in 1846, the library’s collection quickly grew to more than 2,000 volumes by 1860. Its list of books was published in the Catalogue of Books in the Singapore Library, and since the Dewey Decimal and Library of Congress classification systems had not yet been developed, the items were arranged by genre and then alphabetically by title.7 The National Library does not have the first copy of Catalogue of Books of the Singapore Library but it has the September 1860 and January 1863 issues. The two catalogues reveal that the Singapore Library used six genre classes, namely: Biography; Divinity, Ecclesiastical History, etc; General Literature; History, Voyages and Travels, etc; Novels, Tales, etc; and Poetry and Drama.8

Many of the library’s earliest books, which were mostly donated, included titles such as Notices of the Indian Archipelago, and Adjacent Countries (1837), Memoir of the Life and Public Services of Sir Thomas Stamford Raffles (1830) and the entire series of The Edinburgh Review.9 These titles are still with the National Library today.10

Over time, the role of the Singapore Library evolved. In 1849, the library assumed the additional role of a museum when Governor William J. Butterworth presented the Singapore Library with two ancient gold coins given by the Temenggong of Johor. To prepare for its new role, a museum committee was formed and the responsibilities of the librarian were expanded to include the role of curator.11 Although this arrangement was considered as one of the causes for the eventual demise of the Singapore Library, it nonetheless laid the foundation for the next phase of development when the library’s functions were expanded to include the administration of a museum before it was reconstituted as the Raffles Library and Museum on 16 July 1874.12 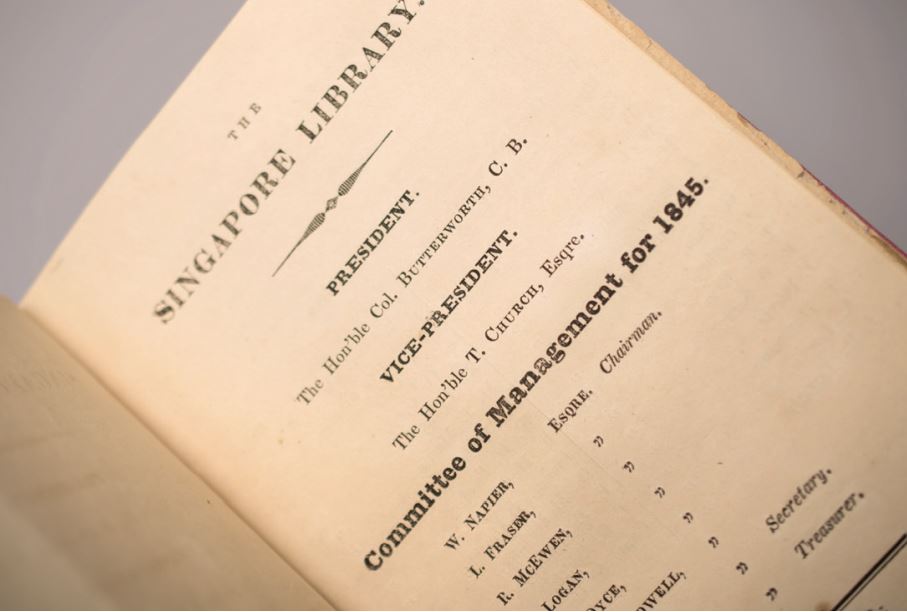 William J. Butterworth (1801–56), Governor of the Straits Settlements (1843–1855), was the first president of the Singapore Library when it opened in January 1845. Image source: National Library Board, Singapore.