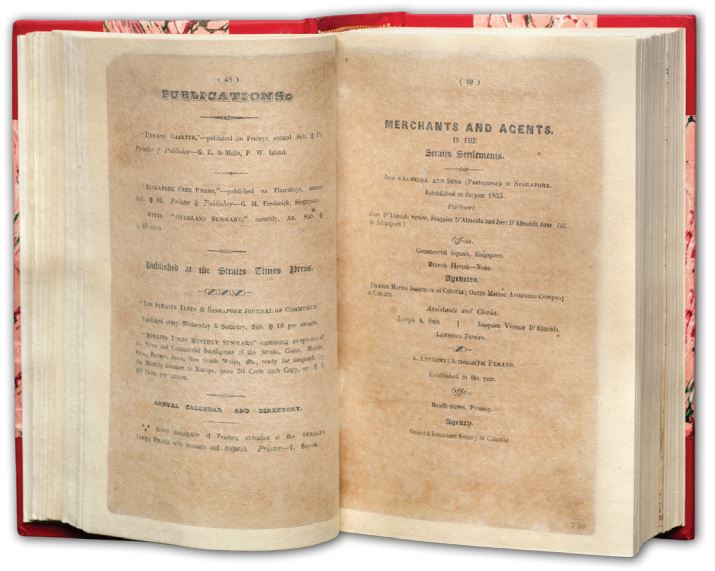 The title page of The Straits Times Almanack, Calendar and Directory of the Year 1846. Image source: National Library Board, Singapore.

A publication dating back to the mid-1800s provides a glimpse into Singapore in the first decades of its founding – the people who lived there during this period and their livelihoods. Apart from the newspapers, The Straits Times Almanack, Calendar and Directory was one of the most useful sources of information about people at the time as it contained the names of the principal residents in Singapore and their professions.

Published annually from 1846, the almanack is also a record of the development of trade and commerce in Singapore. Included in the almanack are the full names, official titles and designations of people working in the government departments, various professions as well as in companies and organisations that had made significant contributions to Singapore. These include the Peninsular & Oriental Steam Navigation Company for shipping and Singapore Institution (now Raffles Institution) for education.

The almanack begins with a calendar of daily events and the lunar calendar for different ethnic groups – Jews, Muslims, Turks and Chinese – and their major holidays. It also contains information on the principal inhabitants of Singapore, including their full names, occupations and affiliated organisations – sometimes with addresses – making it a comprehensive directory. A schedule of mail arrivals and departures was included in the publication’s appendix. Besides Singapore, the publication also included personalities residing in Penang and Melaka. 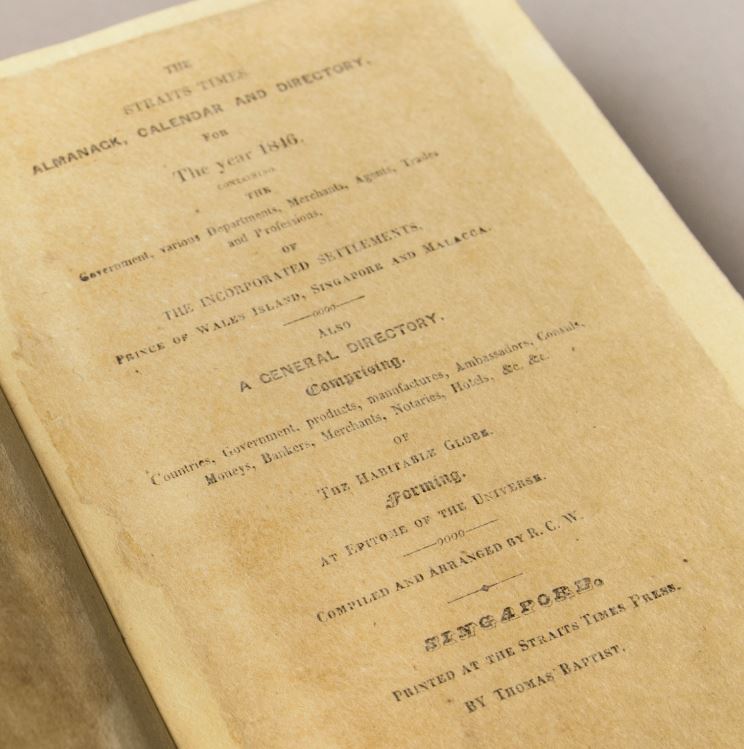 The directory provides a glimpse into pre-war Singapore as it contains the names of its principal residents at the time along with their professions. Image source: National Library Board, Singapore.

As Singapore grew into an international port city, later editions of the almanack were expanded to include more information on trade, including annual trade statistics; tables of exchange as well as records of shipping vessels, harbour rules and fees, and postage fees.

In the preface of the first edition, the editor and compiler, lawyer Robert Carr Woods, had envisaged that the publication would be a useful and convenient reference tool for the public. Woods (1816–75) came from Bombay to Singapore in 1845. Then 29, he was hired by an Armenian merchant in Singapore, Catchick Moses, as the editor of a new daily, The Straits Times. Singapore’s oldest surviving newspaper was published in a small office in Commercial Square (present-day Raffles Place) in the same year.1 The almanack was started a year later and is still published today as Buku Merah, or the Times Business Directory of Singapore.2 Moses subsequently handed over the printing business to Woods when he felt that there were no commercial prospects for the enterprise.3

As business continued to decline, Woods became a law agent and enjoyed a successful legal career.4 The various positions he held in Singapore included deputy sheriff, municipal commissioner and attorney-general. Woods, together with William Henry Macleod Read, was instrumental in leading a group of prominent individuals to lobby for the transfer of the administration of the Straits Settlements from the India Office to the Colonial Office in London.5 Read took an avid interest in the social and political affairs of Singapore; he had served as the first treasurer of the Singapore Library, honorary police magistrate and a member of the Legislative Council.6

In 1860, Woods sold off the printing business in order to spend more time on his legal career and public service. The following year, he went into partnership with James Guthrie Davidson, establishing the legal firm Woods & Davidson, the predecessor of Rodyk & Davidson. Woods passed away in March 1875 and his remains were laid to rest at Bukit Timah cemetery.7

From the 1960s, compilation of the almanack was carried out by the Straits Times office and then by Thomas J. Keaughran. It was initially printed by Straits Times Press, followed by Commercial Press from 1865, Mission Press from 1880 and Fraser & Neave from 1922. 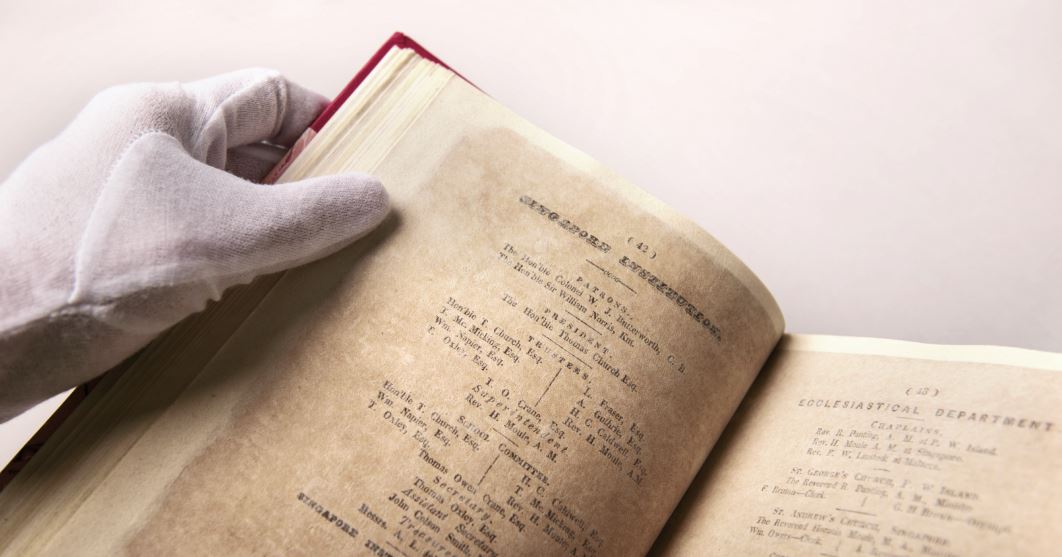 The Straits Times Almanack, Calendar and Directory was first issued in 1846 and is still published today as Buku Merah, or the Times Business Directory of Singapore. Image source: National Library Board, Singapore.