In Aid of the Motherland 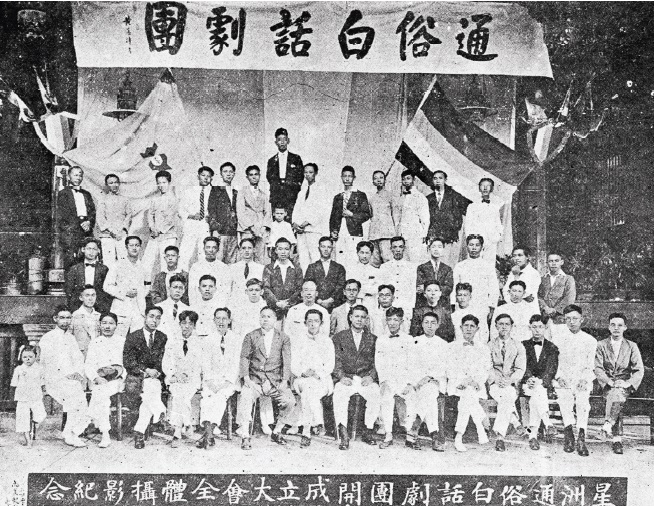 Fundraising activities can tell us a lot about the people in need and those who raise the funds for them. A rare publication titled Singapore Tong Seok Dramatic Association Charity Performance for the Shantung Relief Fund (星洲通俗白话剧团演剧筹赈山东惨灾会特 刊), the souvenir magazine of a fundraising performance that took place in Singapore in 1928, gives us a glimpse of exactly that: how a brutal military clash between Chinese and Japanese troops in faraway Jinan in Shandong province, China, created a wave of patriotism among the Chinese community in Singapore and propelled them to raise funds in aid of their fellow countrymen.

The performance was held over two nights on 6 and 7 August 19281 at Xin Wu Tai (新舞台) on Eu Tong Sen Street, and the accompanying publication is what you would expect of a cultural programme. But apart from information about the performances and artistes, the publication also included poems and articles on the effort to raise money for the Shantung Relief Fund.2 The writings were meant to invoke loyalty among local Chinese for their motherland, and reflect Chinese humiliation and anger over the Jinan Incident – a clash between Chiang Kai-Shek’s Northern Expedition army and Japanese troops in Jinan that resulted in the deaths of hundreds of Chinese soldiera and civilians. 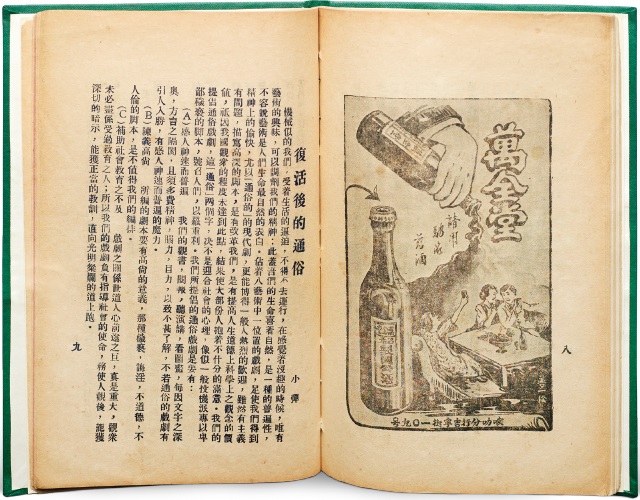 An advertisement in the programme for medicated wine from Wan Quan Tang; its Singapore branch was located at 109 Cross Street. All rights reserved, Tong Seok Dramatic Association. (1928). 星洲通俗白话剧团演剧筹赈山东惨灾会特刊. Publisher unknown.

The incident unleashed an unprecedented nationalist fervour among the Chinese community in Singapore and Malaya, even though many had left the mother country for greener pastures elsewhere. For many overseas Chinese, the performance and souvenir publication were stark reminders of the sufferings inflicted by the Jinan incident as well as an emblem of their love for their motherland.3

The book also contains information about the Singapore Tong Seok Dramatic Association, which organised the performance, and includes scripts and photographs of the various acts as well as the names of sponsors and other partners. Established in 1924 by a group of Tong Ren Club (同仁俱乐部) members,4 the association’s first performance was in aid of a disastrous flood (筹赈闽省水灾会) that took place in Fujian province.5 The association disbanded in 1929, with some of its members joining other performing associations.6 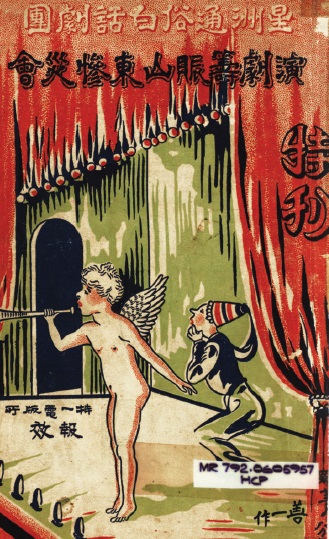 The publication provides a rare insight into the political allegiances of the Singapore Chinese community. Despite the physical separation, the Chinese government and activists viewed overseas Chinese as a major source of monetary aid. It was not uncommon for wealthy Chinese businessmen who had risen to become community leaders to initiate fundraising activities for such nationalist causes.7

The Shantung Relief Fund was one of the largest in early 20th century Singapore, raising a staggering $1.34 million in nine months,8 with many well-known overseas Chinese leaders such as Tan Kah Kee and Eu Tong Sen contributing to it. In fact, the Shantung Relief Fund Committee, formed on 17 May 1928, was led by Tan.9 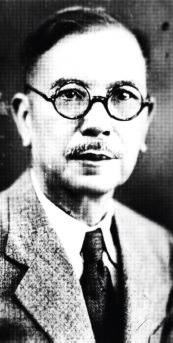 The prominent businessman Tan Kah Kee (1874–1961), who led the Shantung Relief Fund Committee, was a major contributor himself. The success of the fundraising effort was an indication of how strongly local Chinese still felt about the motherland. Tan Kah Kee Memorial Museum Collection, courtesy of National Archives of Singapore.

Many associations, individuals and businesses took part in the relief effort, and the extraordinary extent of mass participation was significant for three reasons: first, it reflected the involvement of Malayan Chinese in China’s politics;10 second, it broke the bang or dialect limitations and barriers of the different Chinese dialect groups, making them more committed to community goals; and third, it set the pattern of mass mobilisation in the 1930s when similar methods to raise money were used in other relief efforts.11

Likewise, the performance was significant for reflecting thecultural leanings of the community. Instead of staging traditional Chinese opera, which was very popular at the time, the organisers put up a vernacular performance that comprised four contemporary plays on family and social issues. Modern vernacular Chinese instead of classical Chinese was used to write the script, and performers spoke instead of singing their lines. Such early vernacular performances were heavily influenced by modern Western plays.12