A Poetic Travelogue in Tamil 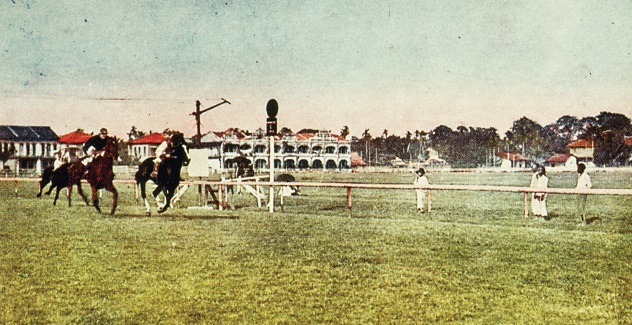 The old race course off Serangoon Road (photographed in 1904) was renamed Farrer Park in 1935 when it moved to Bukit Timah. Interestingly, only a small section of the book Athivinotha Kuthirai Panthaiya Lavani (which translates into English as An Anthology on Horse Racing), is devoted to the sport. Arshak C. Galstaun Collection, courtesy of National Archives of Singapore.

An Indian migrant brings his wife to Singapore in the late 19th century to watch the island’s horse races. As the couple travel around the British colony, the husband, N. V. Rengasamy Dasan, describes each building and street they pass to his wife, painting a verbal picture of turn-of-the century Singapore.

The travelogue, written in the form of a poem, is the first non-religious Tamil book to be printed in Singapore and notable for breaking new ground in the Tamil literature scene – using colloquialisms such as kampong (village), pasar (market) and kopi (coffee) at a time when most Tamil literature was written in classical Tamil.1

Published in 1893, the title of the book, Athivinotha Kuthirai Panthaiya Lavani (which translates into English as An Anthology on Horse Racing), is misleading as only a small section of its contents is devoted to the sport of horseracing. For the most part the book reads like a travelogue of Singapore.

Penned by the husband, N. V. Rengasamy Dasan,2 the anthology is divided into two broad sections. The first section is dedicated to Lord Murugan – the God of War and the patron deity of Tamil Nadu.3

This is followed by 21 verses that describe the couple’s journey around the island. The poem is written mainly in the Lavani tradition, which features a rhythmic song-and-dance beat and is typical of a genre of music popular in India’s Maharashtra state. The word lavani is derived from the Sanskrit word lavanya, or beauty, and also from the Marathi word lavane, which means grace.4

The first four verses of the poem set the scene for the departure of Dasan and his wife from Poyyur, a village in Nagapattinam in the Thanjavur district of Tamil Nadu, India. Before leaving, Dasan visits Teacher Ananda Narayanasamy for his blessings.

Verses 5 to 11 describe the couple’s sea voyage from India to Singapore. En route to Penang, Dasan sees an areca palm-covered island known to Indians as Achakkarai (present-day Bandar Aceh in Indonesia). The couple reach Penang, where they visit the Krishnan and Mariamman temples. They then board another ship to Malacca and finally arrive at the Tanjong Pagar dock in Singapore. Along the way, the ship passes St John’s Island, known to Indians as Puramalai.

In the next 10 verses, Dasan narrates the sights and sounds of Singapore to his wife. The duo take a horse-wagon ride along Yin Sing Road (today’s Ann Siang Hill) to Sabarji Road (South Bridge Road), worship at the Sri Mariamman Temple and pray at Chulia Mosque (also known as Jamae Mosque) before reaching Noor Kinnaa Road (North Bridge Road). There are references to Chartered Bank and the Hong Kong Shanghai Bank, and Dasan tells his wife about the call girls and Japanese geishas who ply their trade at North Bridge Road. 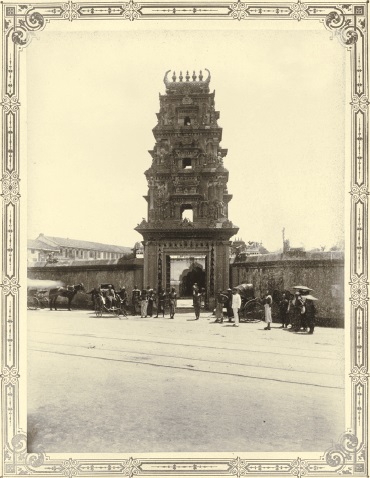 Sri Mariamman Temple, the oldest Hindu temple in Singapore, photographed in 1914. This is one of the places of interest mentioned in this book. Photo by G. R. Lambert & Co. Lee Kip Lin Collection. All rights reserved. Lee Kip Lin and National Library Board, Singapore 2009.

Other notable places along the couple’s journey include the General Post Office, Iron Bridge (Cavanagh Bridge), Supreme Court, Yuroppa Hotel (City Hall) and the Padong (Padang). Then they proceed to Dhoby Ghaut, Serangoon Road and Buffalo Road before reaching the race course.

The horserace is outlined in verses 16 to 18. Dasan and his wife try their luck, betting on their favourite horse. Verse 19 describes the couple’s climb up Government Hill after the race, where they admire the view. The poem proper ends on verse 20, which describes Dasan and his wife passing Kampong Bencoolen on their way to Dhoby Ghaut, where they will settle down in Singapore.

In the last verse, Dasan indulges in self-praise, making sure to mention that he has been lauded by scholars for his poetic skills. The title “Sarabakkodi” was given to him in recognition of his poetic abilities. Hence, the author’s full name on the title page of the publication states: Thirukkudanthai (name of place) Sarabakkodi (his title) Rengasamy Dasan, who was student of Kurungulam (name of place) Karuppanna (teacher’s name) and Upaathiyayar (title for teacher). 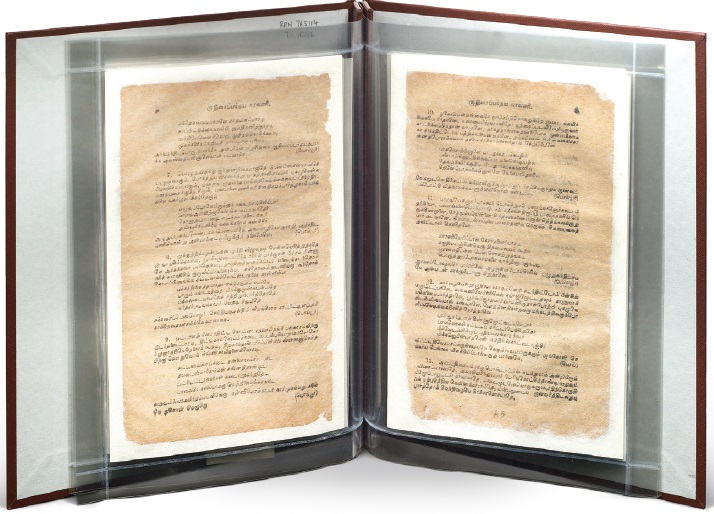 As the binding of Athivinotha Kuthirai Panthaiya Lavani has become loose over time, the individual pages are preserved in plastic sheathes. All rights reserved, National Library Board, Singapore.

The anthology was published by Denothaya Venthira Press, which was owned by Makadoom Saiboo (Makhdum Sahib), a Singapore-born member of the local Indian Muslim community, also known as Jawi Peranakan.5 The community owned a few presses at the time in Singapore and published Tamil newspapers and books.6