Chinese food in Singapore is a product of the country’s history and geography, reveals Low Sze Wee. 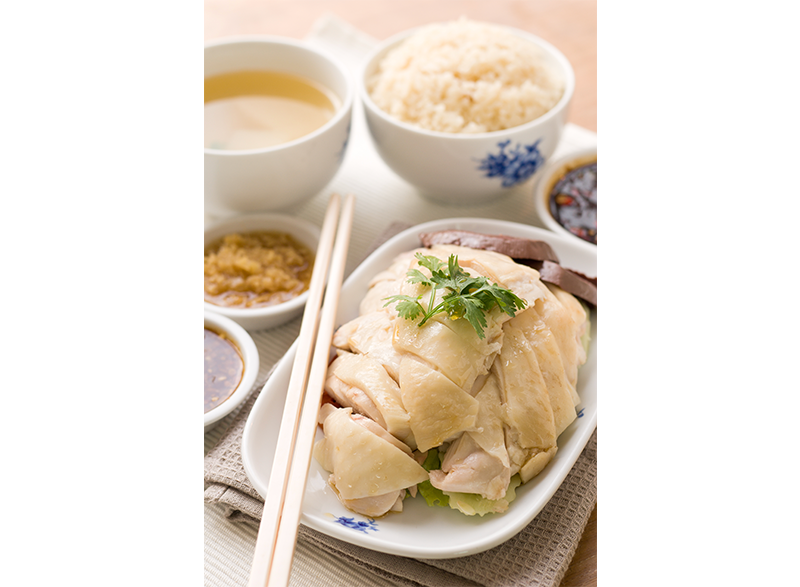 Hainanese chicken rice has its origins in Wenchang county in Hainan, China. The chicken is cooked Cantonese-style and best eaten with a dip made of chilli, garlic and ground ginger. From Shutterstock.

Eating out is very much a part of the national identity of Singaporeans. Given the wide variety of eateries available here, from hawker stalls to Michelin-starred restaurants, this is not surprising.

Part of what makes Singapore a food paradise is that the country is a multicultural one, and the dishes reflect this as well as the country’s unique history. At the opening of the Singapore Chinese Cultural Centre in 2017, Prime Minister Lee Hsien Loong observed that over time, the different ethnic groups here have retained their own culture and heritage, but each has also “allowed itself to be influenced by the customs and traditions of other races. The result has been distinctive Singaporean variants of Chinese, Malay, Indian, and Eurasian cultures, and a growing Singaporean identity that we all share, suffusing and linking up our distinct individual identities and ethnic cultures”.1

The distinctive Singaporean variant of Chinese culture is visible in food, especially hawker food. Chinese hawker food in Singapore reflects the intermingling of different Chinese groups that migrated here as well as the influence of other cultures. This is despite the fact that these dishes have names that suggest that they come from a particular group, like Hainanese chicken rice or Hokkien mee.

The much-loved dish of Hainanese chicken rice, which many claim to be Singapore’s national dish, has its origins in boiled Wenchang chicken – a traditional dish from Wenchang county in Hainan. It was introduced into Singapore by early Hainanese migrants.2

While this dish has Hainanese roots, over time, hawkers have adopted the Cantonese method of preparing pak cham gai (Cantonese for “white chopped chicken”). This involves soaking freshly boiled chicken in iced water to produce a jelly-like silky texture in the skin. The addition of aromatics like lemongrass or pandan leaves when cooking the rice, and the use of a dip made from chilli, garlic and ground ginger makes this dish very much a product of this region as well.

Today, this delicious hawker dish is ubiquitous: halal versions are very popular in food courts, there are long queues at Michelin-rated stalls in hawker centres, and chain outlets that specialise in the dish jostle for space in malls. In 2016, there was even a version offered by Han Li Guang, chef-owner of Restaurant Labyrinth, which was awarded one Michelin star from 2017 to 2020.3

Yong tau foo is another example of the confluence of different Chinese dialect groups. The dish as we know it today is a collective term for various stuffed, boiled items but it originally referred to just one thing – stuffed tofu (yong means “stuffed” in the Hakka dialect). Its origins may be traced back to the nomadic Hakka people of northern China, where dumplings were a key part of their lunar new year celebrations. However, as they migrated south, they could not find the wheat flour needed to make the dumplings. Hence, they improvised by stuffing ground meat into tofu instead. This was likely the first incarnation of our local yong tau foo. 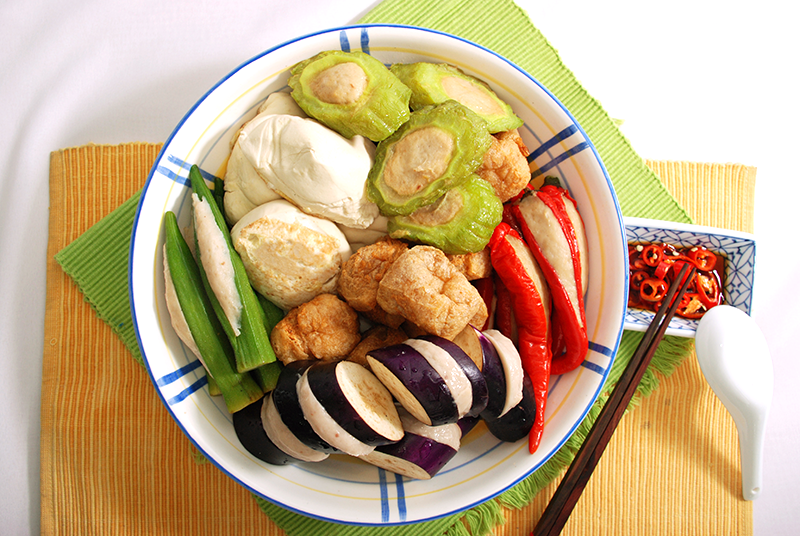 Yong tau foo was introduced to Singapore by Hakka migrants. Today, it is a collective term for various stuffed, boiled items such as bitter gourd, chilli and eggplant. From Shutterstock.

When the Hakkas arrived in Southeast Asia in the 19th century, they started using seafood and fish paste for the filling as these ingredients were readily available here. This dish was later adopted by Cantonese hawkers in Singapore who started using different items like bitter gourd, chilli and eggplant to hold the filling.

Hokkien mee is another dish that showcases different regional influences. Despite its name, Hokkien mee also has significant Cantonese influence. This can be seen in the evolution of local fried Hokkien mee, which is a dish of thick yellow Hokkien noodles and beehoon (rice vermicelli) with prawns, pork belly, chives, egg, squid and fish cake cooked in crispy cubes of lard.

Instead of the flat noodles in traditional Hokkien mee from Fujian, the Singaporean version uses round yellow noodles and is served with sambal belacan (chilli paste with fermented shrimp) and lime, ingredients more commonly found in Malay cuisine. The Cantonese influence is evident as the dish is fried over a very hot fire to achieve wok hei (literally “breath of the wok” in Cantonese, referring to the smoky flavour created by stir-frying over high heat), a foundational Cantonese cooking technique. Chinese food in Singapore does not merely reflect the admixture of different Chinese groups who migrated here; Singapore’s geography also plays an important role. When they came to Southeast Asia, the Chinese started using more locally sourced spices, fruit and vegetables in their cooking. This led to the use of ingredients such as pandan (screwpine), nutmeg, torch ginger, coconut and banana.

The local version of popiah illustrates this. A spring roll containing ingredients such as turnip, carrots, bean sprouts and thinly sliced fried tofu, popiah was originally from Fujian and Chaoshan. Singaporean version has bangkuang or jicama (Mexican turnip) instead of bamboo shoots as the latter were not readily available in Singapore at the time.

In addition to local ingredients, the cosmopolitan nature of a port city like Singapore also played a part in shaping local Chinese food. Laksa, for example, is now a common dish found in many restaurants and hawker centres. The dish is essentially a Chinese noodle soup cooked with a blend of Malay spices, fish stock and coconut milk. Tau pok and cockles were later added to the original dish. Regional touches are the inclusion of belacan, lemongrass and dried chilli.

This popular dish is today most associated with the Peranakan Chinese, descendants of early Chinese traders who had settled down in Southeast Asia and married local women.

Through their familiarity with Malay cooking techniques and Southeast Asian ingredients, the Peranakan Chinese are also known for their localised version of the Chinese rice dumpling (bak chang in Hokkien and zongzi in Mandarin; glutinous rice stuffed with meat and wrapped in bamboo leaves).4 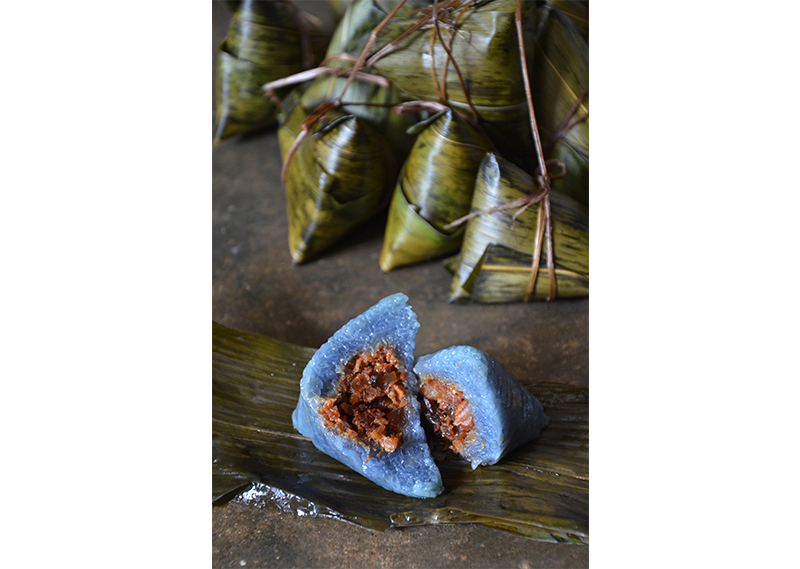 Nonya dumplings, which are different from Chinese dumplings, use candied wintermelon in the filling, the local blue pea flower as a colouring and pandan leaves to encase the rice. From Shutterstock.

Another example of Malay influence in the dumpling is the extraction of the juice from the petals of the local butterfly pea flower (bunga telang) to colour the rice, a technique borrowed from Malay kueh-making. Nonya dumplings also use pandan leaves to encase the rice. Apart from adding fragrance, pandan leaves are also more easily available in Southeast Asia compared to bamboo leaves which are traditionally used for wrapping dumplings in China.

In addition to Asian influences, hawker food bears the hallmarks of Singapore’s colonial past. This can be seen in the popular breakfast set of toast slathered with kaya (jam made from coconut milk, eggs and sugar) and accompanied by freshly brewed kopi (Malay for “coffee”) or teh (Hokkien for “tea”).

This was served in Hainanese-run kopitiams (coffee shops) in early Singapore and remains a breakfast staple for many Singaporeans today. During the colonial period, the Hainanese worked as cooks in wealthy Peranakan Chinese and British homes and even aboard British ships. After the Japanese Occupation (1942–45), some Hainanese who had lost these jobs sought to make a living by running kopitiams. 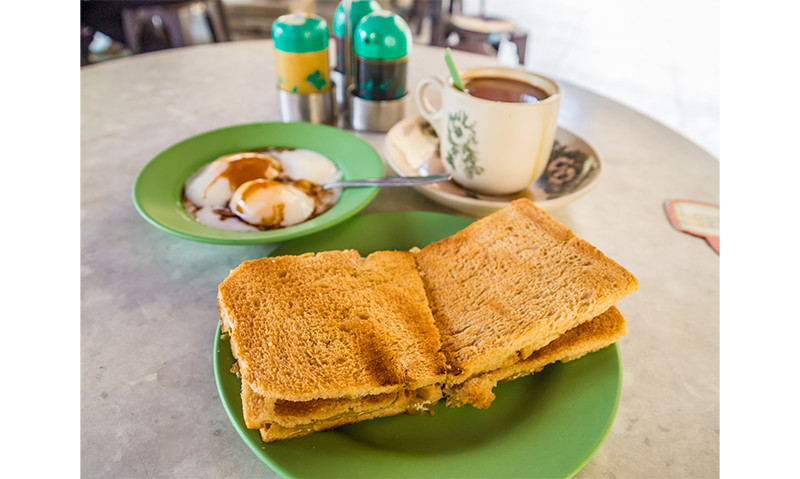 Kaya toast paired with half-boiled eggs is a popular breakfast item in Singapore. From Shutterstock.

There, they served food and drinks commonly seen in their former employers’ homes such as the Western-style breakfast of eggs with toast, eaten with coffee or tea. As fruits like strawberries were not easily available in Singapore to make jam, the Hainanese, like the Peranakan Chinese, adapted and used coconut milk, eggs and pandan leaves to make kaya. And in a twist on half-boiled eggs with salt and pepper, the Hainanese drizzled dark soy sauce over the eggs, thereby putting their own local spin on this British breakfast classic.

Hainanese curry rice is another example of the mix of east and west. Curry rice is a rice dish served with pork chop, curry chicken, babi pongteh (Peranakan-style braised pork) and chap chye (braised mixed vegetables), all heavily doused in curry gravy. The pork chop is an adaptation of the Western dish, using ground crackers as coating instead of breadcrumbs. Curry chicken, babi pongteh and chap chye are well-known Peranakan Chinese dishes. These days, options like sambal prawn and squid, sardine, prawn fritter and assam fish are also available.

Cultural exchange in Singapore was and continues to be multidirectional; cultures in close proximity tend to influence each other. Indian mee goreng is a good example. This fried noodle (mee and goreng are Hokkien and Malay for “noodle” and “fried” respectively) dish did not originate in India though. Initially sold by early Indian-Muslim hawkers in Singapore from tricycle-mounted woks, Indian mee goreng is now a popular supper dish at 24-hour eateries. The dish combines Chinese yellow noodles with dark soy sauce, Western tomato sauce, or ketchup, and tomatoes, with chilli and curry flavours from Indian cooking, all fried in a hot wok.

Chinese rojak is different from Indian rojak, however, which was said to have been invented by early Indian migrants. Comprising potatoes, eggs, tofu and prawns fried in batter, Indian rojak is served with chopped raw onions, chilli and cucumber, then dipped in a sweet and spicy chili sauce.

As different cultures continue to meet, interact and learn from each other in Singapore, new, delicious creations will arise. As there is no limit to human creativity, the possibilities are endless.

Low Sze Wee is Chief Executive Officer of the Singapore Chinese Cultural Centre. Formerly head of the curatorial departments at the Singapore Art Museum and then National Gallery Singapore, Sze Wee has curated many local and international exhibitions, including important retrospectives on Singaporean artists and the Singapore pavilion at the 50th Venice Biennale in 2003.