Bonny Tan explores the rich collections of the Anglican Diocese of Singapore, which holds materials such as birth and death records, publications and other documents. 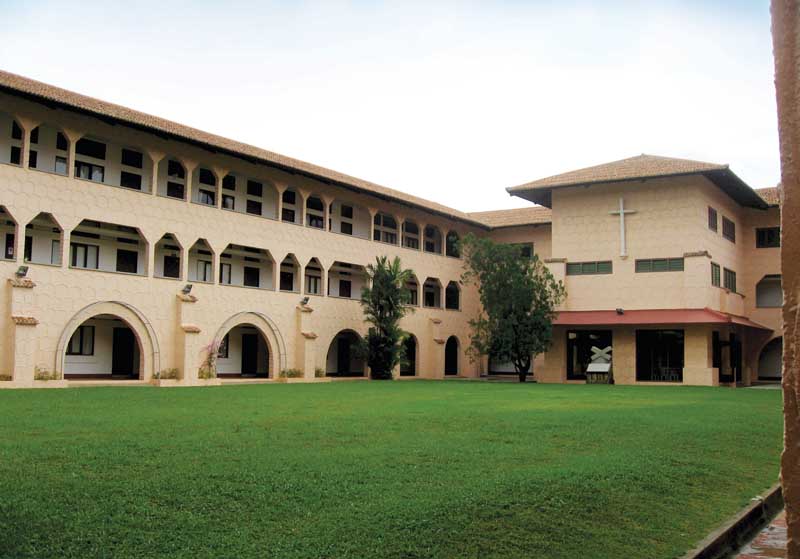 In the early 19th century, the East India Company (EIC) established the Anglican church in Singapore. The church’s development was closely intertwined with that of the colonial government, which initially supported the chaplains and priests as government employees and subsidised the construction of Anglican churches on the island. Singapore’s evolution as a political entity, first as a colony of Great Britain and subsequently as an independent nation, has thus strongly influenced the growth and shape of the Anglican Church in Singapore. In turn, woven into the story of the local Anglican church are the larger stories of changes within the Malay Peninsula during colonial times.

The Anglican church first gained a foothold in the Malay Peninsula when Captain Francis Light took formal possession of Penang in 1786. Services for the British colonials and their families were at first conducted by itinerant chaplains but, gradually, as the community became more established, priests were assigned to specific churches, and the building of schools and more churches followed. In 1814, the Diocese of Calcutta was formed under the EIC. Its jurisdiction covered all Anglican missionary work east of the Suez, including that of Penang and later Malacca and Singapore.

In 1823, Stamford Raffles chose the strategic location — the Esplanade — as the place to build the first Anglican church in Singapore soon after establishing the settlement. The large green expanse sat in the heart of the European residential population, locked between the business centre and the Chinese town to the west, and the Malay community to the east. St Andrew’s Cathedral still stands there today, a towering testament to the vision of Raffles.

After Singapore, Malacca and Penang were brought together to form the Straits Settlements in 1826 and the colonial capital was established in Singapore, the Anglican church received its first full-time Chaplain, Reverend Robert Burns. Subsequently, a year after the control of the Straits Settlements was transferred from Bengal (in India) to the Colonial Office in Britain, the first Colonial Chaplain, Reverend John Beckles, was appointed in 1868.

The centre of authority for the Anglican church moved gradually from Calcutta to Southeast Asia when a United Diocese of Singapore, Labuan and Sarawak was formed in 1881. In the late 19th century, churches were increasingly established across the Peninsula, including Taiping (1887), Kuala Lumpur (1887) and Seremban (1893).1 This was a natural consequence as the Malay States opened up with the signing of the Pangkor Treaty in 1874 and the British started to establish themselves commercially, in businesses and plantations, in the Peninsula. During this time, local Tamils and Chinese from various dialect groups began joining the Anglican church.

The Anglican Church in the 20th Century

Increasingly, the need to centre Anglican missionary work in Singapore became apparent. Archdeacon Hose, a brilliant preacher and Malay scholar, started the Bishopric Endowment Fund to help set up the Diocese of Singapore.2 The Diocese of Singapore was formed in 1909 and included the Straits Settlements, namely Singapore, Penang and Malacca, as well as the Federated Malay States, Java and Siam (Thailand). Unfortunately, the diocese suffered financially during this period because of the Great Depression and the two World Wars. To make matters worse, the Japanese Occupation seemed to have obliterated what was left physically of the Anglican church as its expatriate priests were interned.

Thankfully, a stronger Asian leadership emerged after the war. The church, with an awakened local laity, arose ready to ride the new wave of nationalism. The chaplaincy system was replaced by parishes in 1947, a signal of the endorsement of “a permanent civil establishment”.3 In 1960, the Diocese was renamed the Diocese of Singapore and Malaya, soon after Malaya’s independence from British rule in 1957. By 1970, five years after Singapore separated from Malaysia, the Diocese of Singapore reverted back to her former name with jurisdiction only over Singapore initially but later expanding in the 1990s to encompass the six deanery countries of Cambodia, Indonesia, Laos, Nepal, Thailand and Vietnam.

The Anglican Archives in Singapore

As early as 1868, the Church showed concern that its records “[were] in danger of being injured or lost” and its leadership took steps to obtain a small iron safe.4 However, the Anglican Archives at the diocese was not formally established until 2008.

That same year, the National Library Board of Singapore (NLB) began digitising the heritage records preserved in its holdings. These include nine volumes of the Church Record Book spanning from 1838 to 1941 — comprising old manuscripts from St Andrew’s Church (later rebuilt as St Andrew’s Cathedral) and include records such as minutes of meetings, appointments and updates. As the church was closely linked with Singapore’s colonial government, these manuscripts give insight not only to the clergy and laity within the church but also make references to early leaders in the colonial government in Singapore.

For the genealogist, there are several resources that may prove valuable for research. Baptism records indicate pertinent details of a child and their family such as date of birth, parents’ names, location of home and even father’s vocation. There are also marriage notices, including records of marriages consecrated at St Andrew’s Cathedral during the Japanese Occupation between 1944 and 1945. The records indicate the ages of the newlyweds, the profession of the groom, the residential addresses of both partners and the name as well as profession of the groom’s father. The respective nationalities of the bride and groom were also required, revealing several Chinese and Indian names. Nominations to lay leadership present details such as place of birth, marital status, number of children and occupation, alongside details of ministry experience. The Cathedral’s most extensive death records is the nine-volume Book of Remembrances, acknowledging those who had died in the war.

Besides primary BMD5 records, the archival holdings also include several publications unique to the diocese, namely Singapore Diocesan Magazine and the Singapore Diocesan Quarterly. Minutes of meetings such as the Singapore Diocesan Association records (1911–1931) are not merely administrative records; when taken as a whole, these unfold much of the history and ministry of the Anglican community in the Malay Peninsula. The records include profiles of leaders and details on the establishment of churches, schools, hospitals and other forms of social infrastructure. These are supplemented with information contained in the Singapore Auxiliary Diocesan Association Quarterly Leaflets. Much earlier records have also been digitised, such as the Church Records of the St Andrew’s Church Committee from the mid-19th century; these are often scrawled minutes of meetings in elegant but not always legible handwriting. 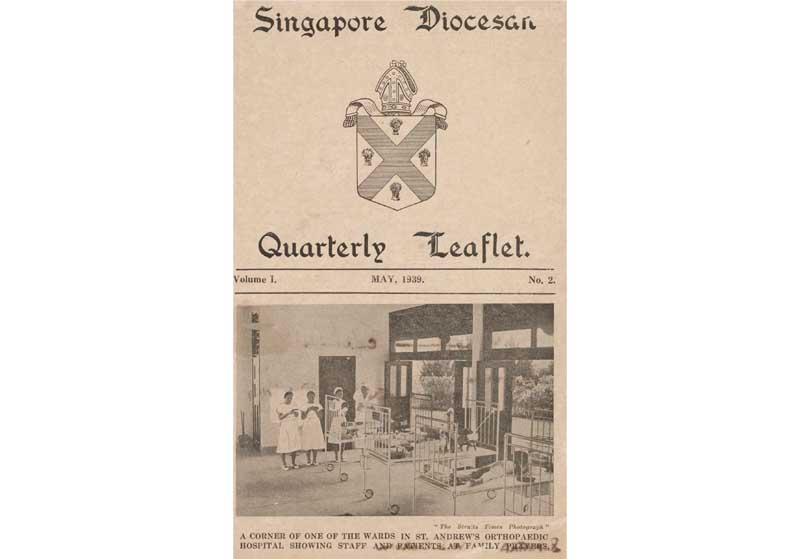 The Singapore Diocesan Quarterly Leaflet, Vol. 1, No. 2, May 1939. Image courtesy of the Archives of the Anglican Diocese of Singapore. 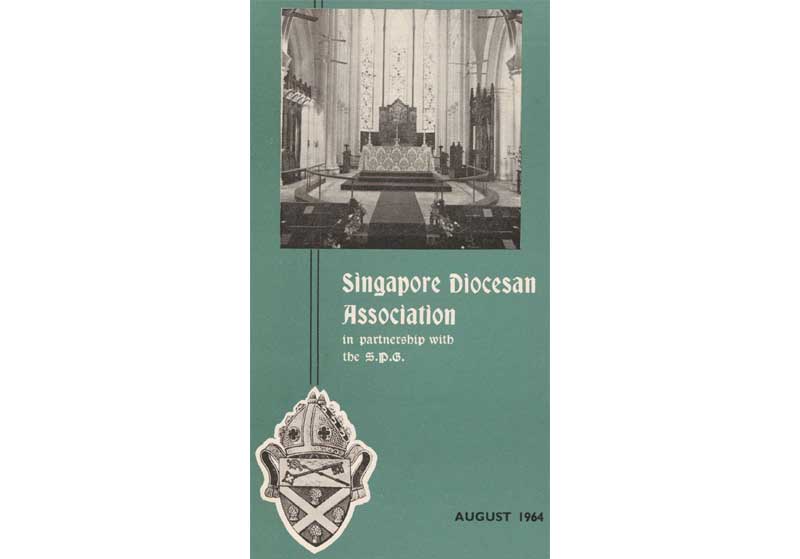 An example of subsequent editions renamed the Singapore Diocesan Association Magazine, August 1964. Image courtesy of the Archives of the Anglican Diocese of Singapore.

These digitised resources are available for onsite viewing at the National Library of Singapore. Some significant national gems within its holdings include the Letters of Patent to the Straits Settlements in the 33rd year of HM Queen Victoria (1869), which officially placed the Diocese of Singapore, Labuan and Sarawak directly under the jurisdiction of the Archdiocese of Canterbury as well as the Letters of Patent to Labuan and its dependencies in the 34th year of HM’s reign (1870). These massive manuscripts are housed in glass cases along with their impressive large seals complete with embossed images.

Besides these rare items are limited numbers of photo albums, architectural drawings and various handwritten letters and records. The Anglican Archives continues to grow as it receives and collects invaluable materials such as The Courier, the St Andrew’s Cathedral’s magazine published since 1915, and several other publications from various churches within its fold. The Anglican Archives is open to researchers who make advance appointments.

First published as the Singapore Diocesan Magazine in November 1910,6 it was “a quarterly record of church work etc. in the Diocese”.7 The Diocese of Singapore, formed in 1909, had extended beyond the Straits Settlements to include the Federated Malay States, Java and Siam (Thailand). The first issue noted how the Singapore Diocesan Magazine was inspired because “we in the Church of England seemed to know very little about each other’s doings, and in consequence were not sufficiently united.” The quarterly thus gave updates on recent church activities and events in each district as well as in the church-run homes, schools and institutions along with appointments of both clerics and laity. The digitised collection spans from the first issue of 1910 until Volume 27, Number 104 of November 1936. The magazine continues today as the Diocesan Digest. 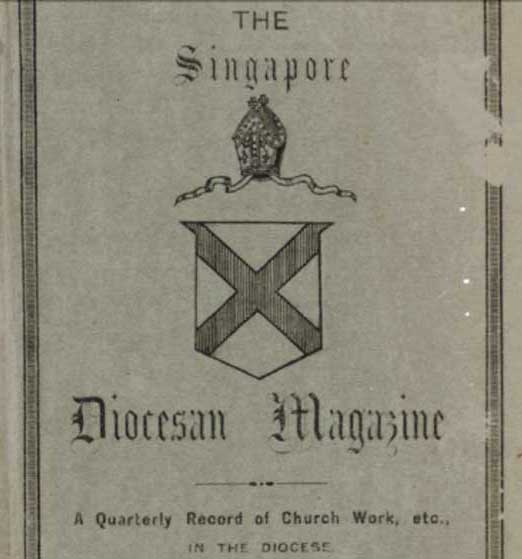 Cover page of the first issue of the Singapore Diocesan Magazine. Courtesy of the Archives of the Anglican Diocese of Singapore.

BRIEF HISTORY OF THE ANGLICAN CHURCH IN SOUTHEAST ASIA

1786–1814: The British annexed Penang in 1786 and established the Anglican Church through the EIC in the Malay Peninsula.

1814–1869: The Malayan chaplaincies of the Straits Settlements – Penang, Malacca and Singapore – come under the jurisdiction of the Bishop of Calcutta.

1869–1881: Singapore and the rest of the Malayan chaplaincies of the Straits Settlements are placed under the jurisdiction of the Diocese of Singapore, Labuan and Sarawak.

1881–1908: A United Diocese of Singapore, Labuan and Sarawak is formed with St Andrew’s Church in Singapore being made the Cathedral Church of the newly established Diocese.

1970: With the separation of Singapore from Malaysia, the Diocese of Singapore becomes a geographically distinct Diocese.

(Left to right) The front cover of the January 1937 issue of The Courier can be found in the holdings of the Anglican Archives;8 Letters of Patent to the Straits Settlements in the 33rd year of HM Queen Victoria (1869) and its accompanying seal. All rights reserved, National Library Board.

St Andrew’s Cathedral as we know it today was designed by Lieutenant-Colonel Ronald MacPherson and built between 1856 and 1864 by Indian convict labourers. Interestingly, the walls are plastered with a material called Madras chunam, a mixture of egg white, coarse sugar, lime, coconut husk and water that has weathered surprisingly well in Singapore’s tropical climate.

During the Japanese Occupation, church services ceased as the cathedral acted as an emergency hospital, treating casualties of the frequent bombings. A memorial plaque stands in the church grounds, commemorating Malayan Civil Service officials who died in World War II.

St Andrew’s Cathedral is the oldest Anglican house of worship in Singapore and was gazetted as a national monument in 1973. 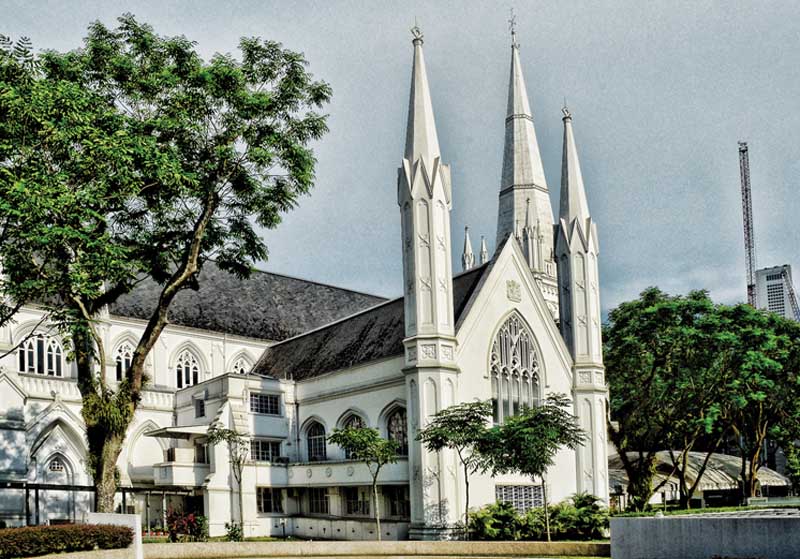 The author would like to thank Ms Lau Jen Sin and Reverend Canon Soon Soo Kee for reviewing this article. 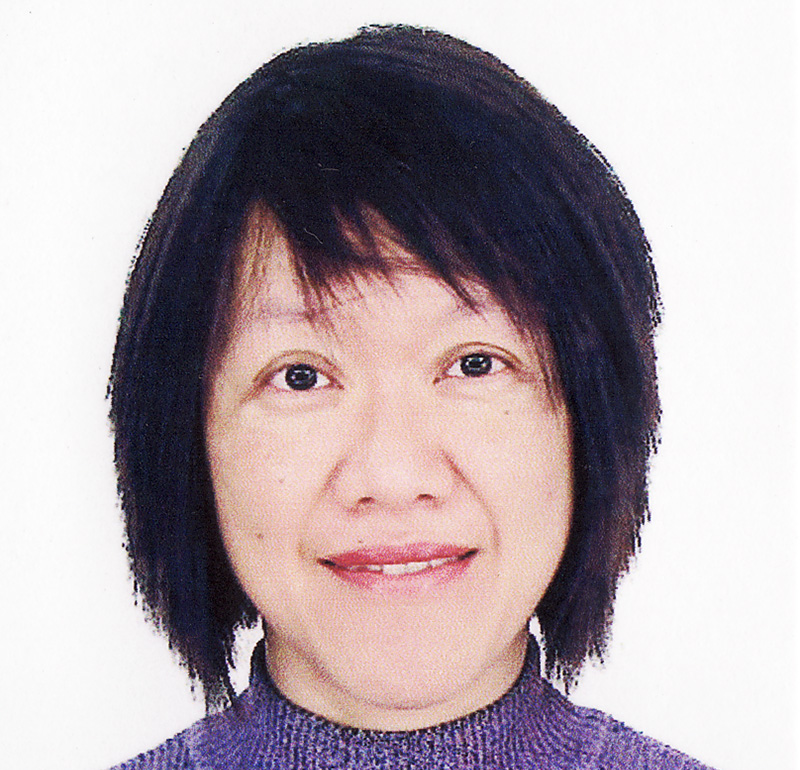 Bonny Tan is a Senior Librarian who has served at the Reference Library at the National Library Board (NLB) since 1997. She has a keen interest in Singapore church history and has been researching this subject since the early 1990s.

Batumalai, S. (2007). A bicentenary history of the Anglican Church of the Diocese of West Malaysia (1805–2005): From historical, theological and missiological perspectives. Melaka: Syarikat Percetakan Muncul Sistem. (Call no.: RSEA 283.95951 BAT)