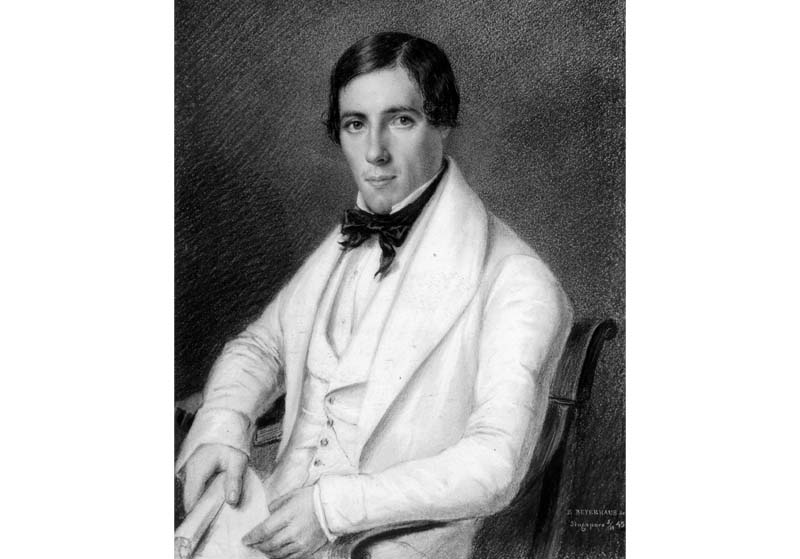 Portrait of John Turnbull Thomson when he was 26 years old. Used with permission from the Hall-Jones family.

One naturally tends to gravitate towards political and economic figures when thinking about Singapore’s pioneers. Yet the physical environment of Singapore has been indelibly shaped by another class of men: the engineers.

In Stamford Raffles’ day, engineering was a trade learnt through apprenticeship. A mathematics graduate of Aberdeen University by the name of John Turnbull Thomson (1821–1884) did an engineering apprenticeship in Newcastle upon Tyne before venturing out to Penang in 1838 as a surveyor. Thomson was subsequently appointed as Government Surveyor of Singapore in 1841, and became Superintendent of Public Works in 1844, taking over from George D. Coleman, Singapore’s most prominent colonial architect, after the latter returned home.

Thomson’s Singapore story was researched and told by a New Zealand relative in An Early Surveyor in Singapore (1979). Author John Hall-Jones filled the book with Thomson’s watercolour paintings and ink drawings depicting many scenes of life in early Singapore. In 1983, the second volume, The Thomson Paintings, was published in colour.

Thomson also wrote two books, Some Glimpses into Life in the Far East (1864) and Sequel to Some Glimpses into Life in the Far East (1865). Written as a series of short vignettes, Thomson’s interesting stories of early colonial Singapore are filled with witty and wry observations about bureaucratic tangles and bold deeds. He also spent time translating parts of Munshi Abdullah’s autobiography as Translations from Hakayit Abdulla (1874). While the original editions have been preserved in the National Library’s rare collection, microfilm copies, reprints and digitised ebooks are available for public use.

John Turnbull Thomson was a noted surveyor, architect and painter. Some of his works were featured in An Early Surveyor in Singapore as well as The Thomson Paintings by his great grandson, John Hall-Jones. Glimpses into Life in Malayan Lands was published in 1984 and is an Oxford University Press reprint of Thomson’s 1864 Glimpses into Life in the Far East. All these books are available for either loan or reference at the National Library and its branches. 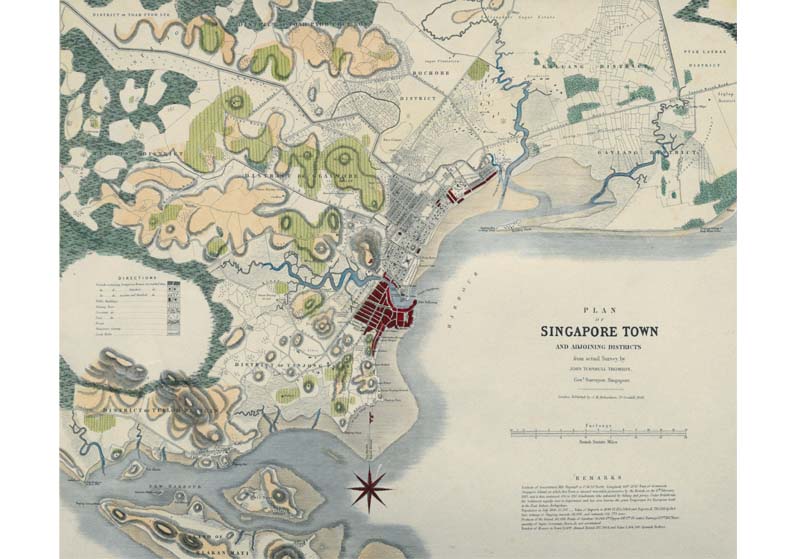 Some surviving mukim (district) property maps by Thomson can be found in the National Archives. However, his most well-known map must be the 1846 Plan of Singapore Town (copies can be viewed at the National Library’s Lee Kong Chian Reference Library on the 11th floor).

Between settling property disputes with his surveying work and mapping the seaboard of eastern Peninsula Malaysia, Thomson found time to contribute articles to James Richardson Logan’s Journal of the Indian Archipelago and Eastern Asia. Published from 1847 to 1859, it was Singapore’s first scientific journal. Over several articles, Thomson covered the physical geography of the region from Rhio (today’s Tanjung Pinang and Pulau Penyengat) to the eastern coast of Malaysia (including the holiday islands of Pulau Aur and Pulau Tioman). The raids of the dreaded Illanun (Iranun) pirates, who took slaves, are also mentioned frequently. Although the National Library’s treasured collection of Logan’s journals is now too fragile to be handled, the microfilm reels of the complete run are available.

From 1844 onwards, Thomson took charge of many public works in Singapore, including the road that now bears his name, Thomson Road. Interestingly, a district of Singapore is believed to refer to him: Ang Mo Kio (红毛桥, today renamed 宏茂桥) or Red-haired Bridge (red hair being a colloquial reference to Caucasians in Hokkien). The bridge in question appears to have been built where Bishan-Ang Mo Kio Park meets Lower Pierce Reservoir along Upper Thomson Road with the village of Ang Mo Kio located just south of it until its removal in the 1970s.

The pinnacle of Thomson’s career was the construction of Horsburgh Lighthouse (1849– 1851) on Pedra Branca. He described its construction in the July and August 1852 issue of Journal of the Indian Archipelago and Eastern Asia (vol. VI, pp. 376–498). Thomson’s meticulous account is accompanied not just by engineering diagrams but also copious notes about his dealings with the workmen and their foremen, as well as explanations of his actions.

Much remains to be researched about Thomson and the works mentioned in this article are just a few highlights of the material about him in the National Library’s collection. Thomson’s legacy lives on today, not only through his works but also, interestingly, on a wine label. Surveyor Thomson Wines in Central Otago, South New Zealand, was named in honour and memory of Thomson by his great-great-grandson David Hall-Jones. 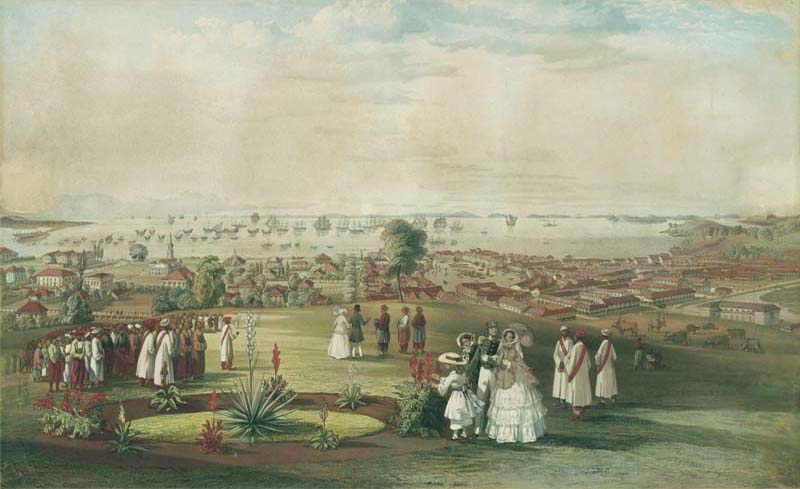 “View of Singapore from Government Hill, 1846” by John Turnbull Thomson. In this scene, then Governor of the Straits Settlements, Lt-Col William J. Butterworth, depicted in the foreground with his family, has just presented the ceremonial state sword to Daing Ibrahim, the Temenggong of Johor on 31 August 1846 for the latter’s efforts in helping to curb piracy in the area. Thomson painted the scene from the verandah of Government House, the residence built for Stamford Raffles in 1822 on Government Hill (present-day Fort Canning). Courtesy of National Museum of Singapore, National Heritage Board. 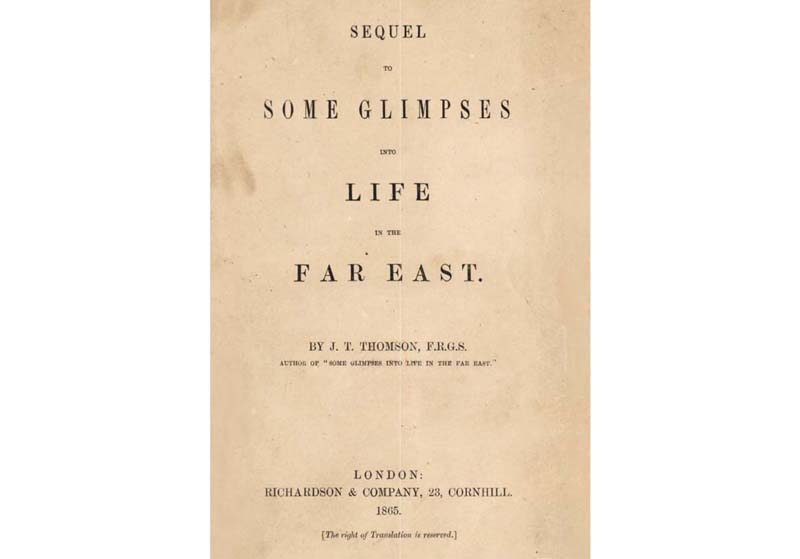 Title page of Thomson’s 1865 Sequel to Some Glimpses into Life in the Far East published in London by Richardson. 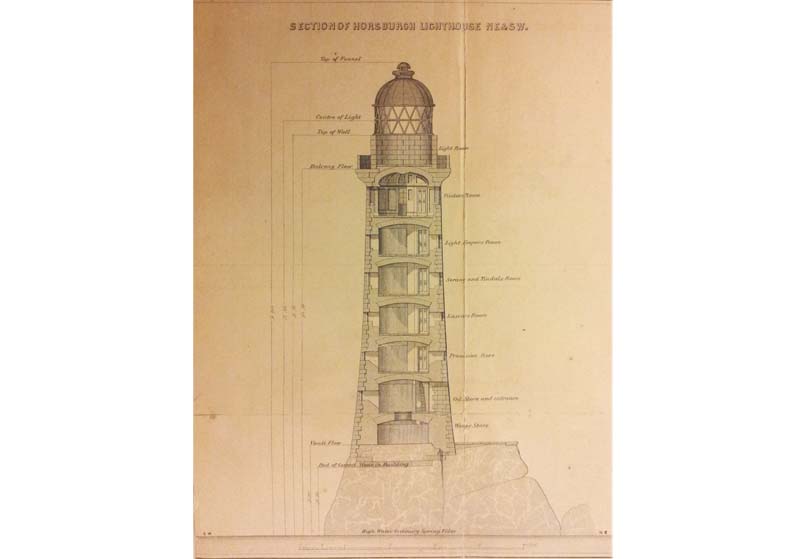 Plan of Horsburgh Lighthouse from Thomson’s 1852 article about its construction in the Journal of the Indian Archipelago and Eastern Asia (vol. VI, pp. 376–498). 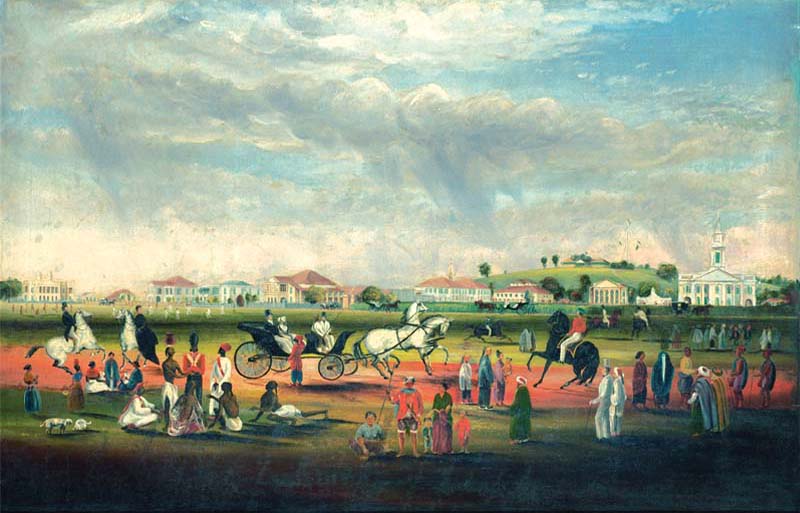 “The Esplanade from Scandal Point, 1851” by John Turnbull Thomson. Scandal Point – a popular meeting place for evening gossip among the European community – was the name given to the small knoll above the shoreline which originally came up to the edge of the Padang (where the present Connaught Drive stands). This was where Lt. Henry Ralfe built the Saluting Battery, a bastion of earth and sand in February 1819, and later mounted the first fixed defence battery with 12 pounder guns to protect the settlement. The painting illustrates the typical social and sporting activities that took place at the Padang during this period. In the background are buildings, several of which were designed by the colony’s foremost architect G.D. Coleman. On the far right is St Andrew’s Church (later demolished to build St Andrew’s Cathedral) and adjacent is the Armenian Church of St Gregory the Illuminator, followed by a series of private residences (including Coleman’s house). Rising behind is Government Hill (present-day Fort Canning). It is believed that the European man in the white suit, top hat and cane on the right of the foreground is Thomson himself with possibly Munshi Abdullah, his Malay teacher. Courtesy of National Museum of Singapore, National Heritage Board. 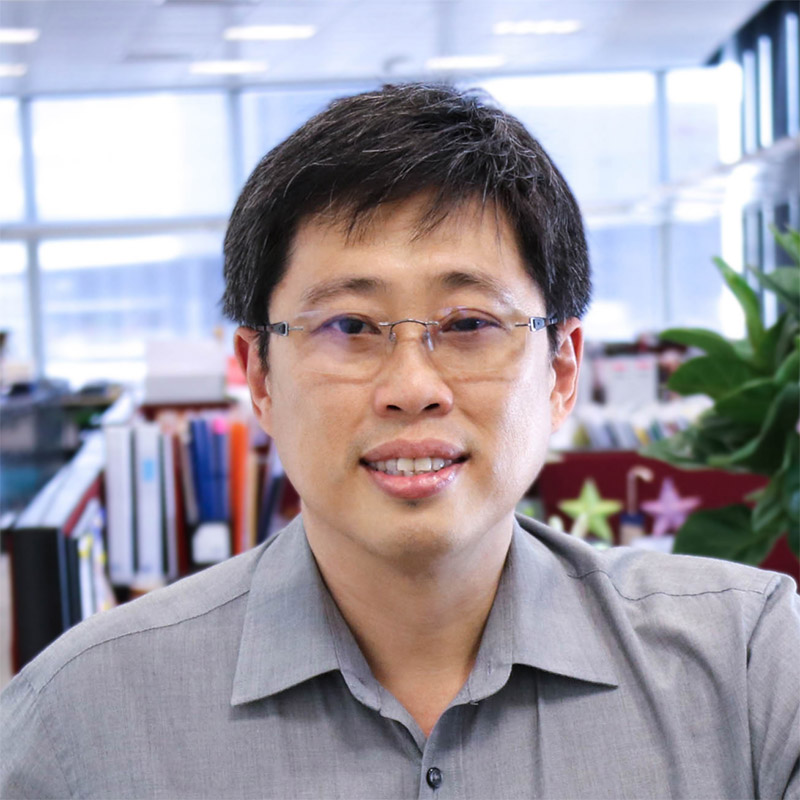 Timothy Pwee is a Senior Reference Librarian with the National Library of Singapore. Visual materials from paintings and photographs to maps and scale models have always fascinated him.