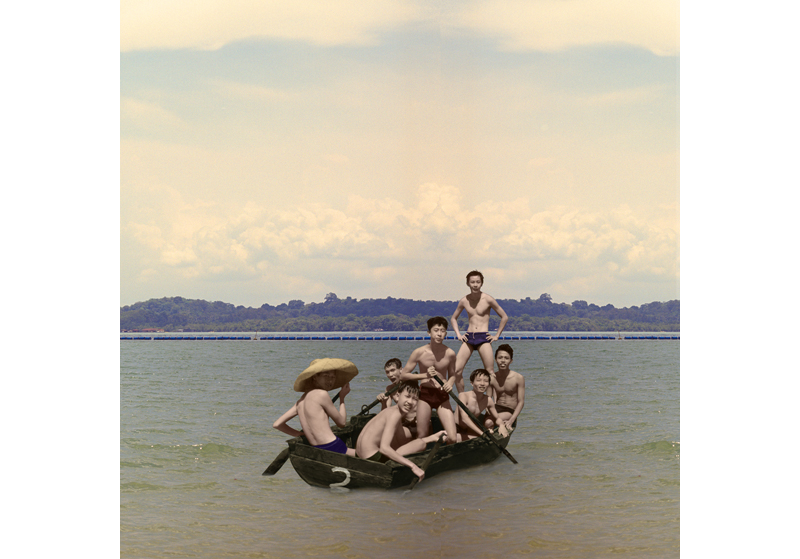 School excursion to Changi Point from "Points of Departure" (2014). The original photograph of school boys is in black and white, captioned "Form 4B picnic at Changi date 28 Nov 1957". The artist has overlaid this image onto a more recent shot of Changi Point, © Juria Toramae. All rights reserved.

When the National Library Board announced its plans to extend its outreach efforts for the Singapore Memory Project (SMP) in 2012,1 the first question that sprung to my mind was: How can one relate to the shared memories of a place if the place in question no longer exists?

Memory is naturally place-oriented or, at least, place-supported as philosopher Edward S. Casey suggests. Memory is a place where “the past can revive and survive; it is a space for places, meeting them midway in its own preservative powers” – playing a “reservative”2 function as Casey describes it.3 Memory also relies entirely on the materiality of the trace, the immediacy of the recording and the visibility of the image, as noted by historian Pierre Nora.4 Thus, in the context of Singapore, where landscapes and places change in a heartbeat, it is not surprising, especially in recent times, to see a surge of interest in documenting the present and remembering the past.

This phenomenon of documentation and remembering is evidenced by the proliferation of nostalgia-related blogs and Facebook groups – many of which have matured into participatory archives – where memories are shared openly among members. The most popular, and obvious, way is through the sharing of photographs. A photo has the ability to instantly trigger conversations, recollections and even moods. However, this is also the most disorienting means of sharing memories as it brings to the fore how places have so drastically and irrevocably changed in the last 50 years or so. With this in mind, I wondered: How would the memories found in the participatory archives, including those in the SMP portal, “nurture bonding and rootedness”5 (emphasis added) if they were bound to cause disorientation?6

In thinking this through, I felt compelled to map these memories according to where they were formed in their present-day locations. I focused on photographs, these artefacts of memory, which had been shared in various participatory archives. I surgically deconstructed each photograph and wove them into a present-day image of their place of memory. The resulting images are imagined narratives depicting ordinary and recurring events in people’s lives. It felt like the right thing to do – to compress time, space and memory – in order to discard the disorienting nature of the photographs in question.

This painstaking process ultimately led to a photographic series called “Temporality”,7 as well as a collaboration based on the same series for an iremembersg-funded project called “Points of Departure”8 with Jerome Lim who blogs on The Long and Winding Road (www.thelongnwindingroad.wordpress.com).

“Points of Departure” as a collaborative effort is both ambitious and arduous. Unlike “Temporality”, it explores memories beyond private photo collections by incorporating content from collective archives, namely the SMP and the National Archives of Singapore (NAS), as well as our own documentation work. It is an attempt to recover memories that are forgotten or unfamiliar, using memories of places as starting points, or as we call it, the “points of departure”. It is a re-presentation of the past in reconciliation with the present.

With Jerome exploring text and sound as artefacts of memory, we wove together forgotten tales, personal experiences, soundscapes and oral history interviews, forming new narratives in the process. In this way, we began mapping memories on a much larger scale by creating a body of work that includes a series of photographs, stories and installations to be showcased through an exhibition and a publication. 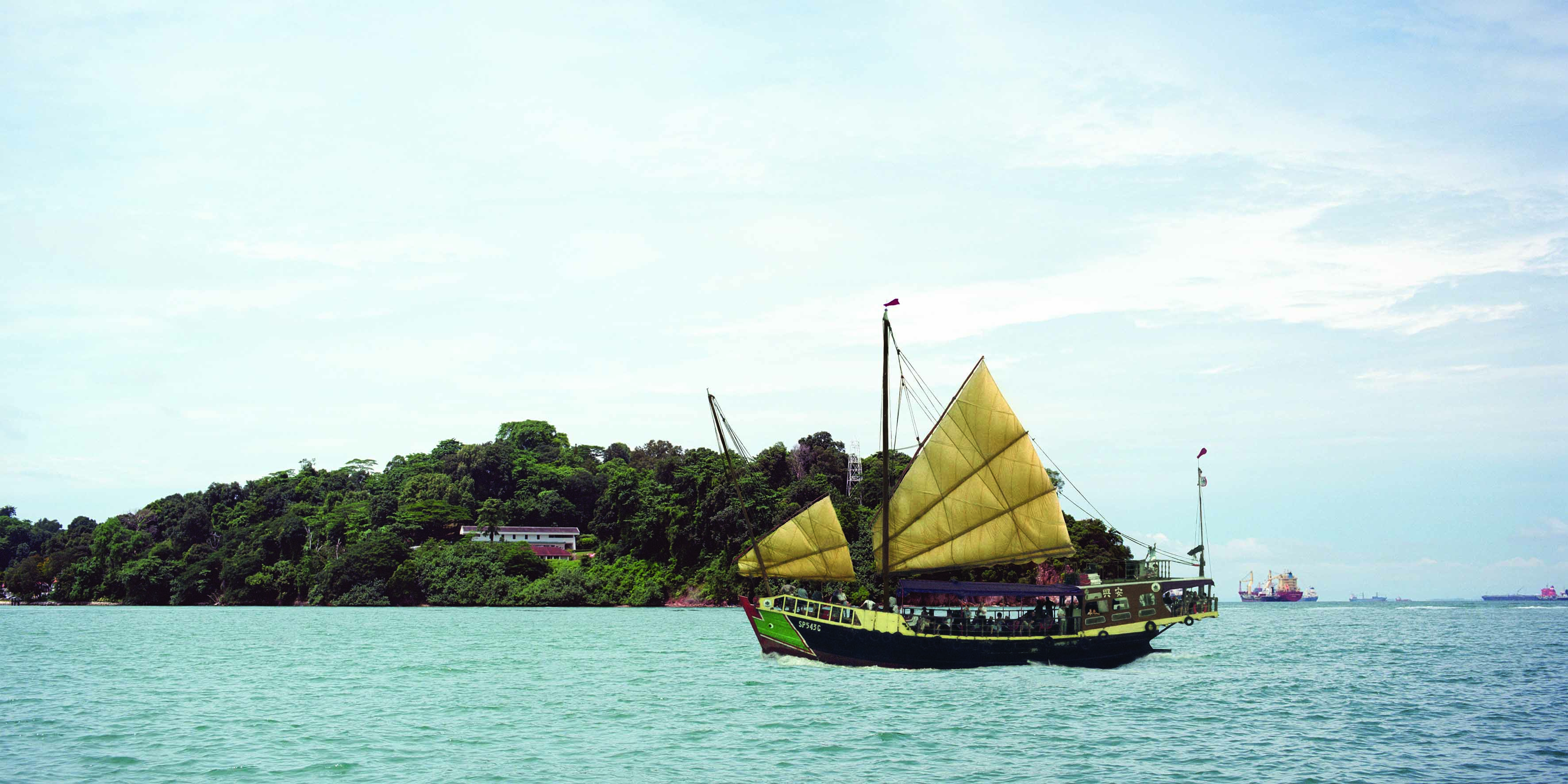 “The Harbour” from “Temporality” (2013). The junk is constructed from a number of images from black-and-white archival photographs dating from the mid-1970s, which were taken at The New Harbour (present-day Keppel Harbour). It was inspired by Margaret Leong's poem “The Junk”. © Juria Toramae. All rights reserved.

A Constant or Changing Sea?

The sea has a constant presence in these works and one may question its significance – does it act as a metaphor for change and loss or as a symbol for continuity? The importance of the sea may have greatly receded from our everyday lives, yet it still emerges in many of our everyday conversations. Those who have witnessed Singapore’s meteoric rise from a newly independent nation to a modern city-state have many stories to tell, and they have been the source of inspiration to me for both works.

The late poet Margaret Leong, for instance, wrote a number of poems about rustic Singapore from the 1950s to early 1960s in her book The Ice Ball Man and Other Poems. Poems such as “Winking Island”, “Sea Gypsy”, “Malayan Christmas” and “The Junk” are just a few of many that capture scenes of early Singapore as older generations remember them. In “The Junk”9, Leong recounts how back in the day.

A Junk must have
A painted eye;
And dragon masts
That dip and fly;
So when it sails
The China Sea,
Spirit and devil
Both will flee.

Chinese junks adorned with painted eyes on their bulwarks once sailed the high seas of the region, laden with all manner of exotic goods for trade. These days the only painted eyes you will likely see on the water are those on the occasional bumboats that cruise along the Singapore River or modern-day faux junk boats filled with tourists that ply the waters of the Singapore Harbour. In “Temporality”, there is an image of a similar junk with painted eyes sailing in the waters of present-day Keppel Channel, but put together from photographs dating from the 1970s.

Likewise, Jerome has diligently captured the Singapore of his younger days on his blog where memories of the sea often surface. In his online post “The Lost Idyllic Coastline of Tanah Merah”, he recalls:

“…what was once a picturesque and idyllic part of Singapore, that much as we wanted to, we would not be able to venture to any more. Marked by a landscape that would seem out of place in the Singapore of today with its terrain that undulates towards cliffs that overlook the sea, the area was decorated with gorgeous seaside villas and attap roofed wooden huts of coastal villages that provided a laid back feel to the surroundings… The Tanah Merah of old was very unlike the Tanah Merah that is associated with the MRT station…”10

Like many Singaporean families in the 1960s, Changi beach is fondly – and frequently – mentioned as a favourite leisure spot of Jerome’s parents. “We would spend many Sundays soaking in the sun and sea in the day time, or sitting by the beach, listening to the whisper of the sea breeze in the evenings. It was, in those days, possible to drive right up close to the sand line, find a shady tree to park the car under and lay out a mat right next to the car… What I would often do was sit on the roof of my father’s car and enjoy the breeze and rustling of leaves above me. Somehow, this gave me a sense of escape, of being all by myself, on top of the world.” 11

Jerome’s descriptions of rolling hills and coastal villages often remind me of my childhood years in rural Thailand – the hills rising beyond rice fields and rubber plantations, my paternal grandparents’ elevated teak wood house that occasionally reeked of dried rubber sheets, and the tropical beach of southern Thailand – a stark contrast to the bouldery coast of Rabat, Morocco, where I spent my teenage years. The latter is where my mother was born – a neglected strip of coast facing the Atlantic Ocean where my young parents frequented, still students at the time, with me in tow – a place where a mix of locals and displaced Asians would forage fresh shellfish for supper.

More memories began to find their way into the present during my sojourns with Ria Tan and friends from the nature enthusiast group Wild Singapore to the lesser known shores of our outlying islands.12 I think Pierre Nora was right when he said that people acquire, recall, recognise and localise their memories in society. Working on this project has been a surprising journey into the self.

I must admit that my initial interest in memories was simply due the desire to immerse myself into the culture of Singapore – a yearning I have had from having lived an itinerant childhood. It was only after reading about conversations on nostalgia-related blogs and sites such as Jerome’s On a Little Street in Singapore13 that I realised how pervasive this sense of disorientation is for many people living in our city. It became acutely noticeable to me thereafter; in the arts, films and news I came into contact with and even in conversations with taxi drivers. It is a sense that I deal with too frequently as an adult third culture kid.14 It’s like being trapped between states of belonging and alienation as poet Boey Kim Cheng so eloquently writes in his book Between Stations: “…You become engaged in a kind of research, ransacking your fading archive, probing the memories of those over fifty for clues… You start experiencing reality as imagined, memory as something that writes you, gives you a second chance, and you seek a possible dwelling place between memory and imagination, fact and fiction…”15 That was the point of departure for me; what began as a humble attempt at acculturation in the end became a long quest for connections.

The idea of the sea being the only permanent feature in our ever-changing geographical landscape was reason enough for me to explore it as a unifying thread for memories. This is a sentiment shared by Jerome too as he often looks at the sea in attempts to discover his own connections with the past.

Through this collaboration, we hope to create a meaningful connection with and between the memories that are very much part of who we are. It is a journey embarked on not by just the two of us but with all the people whose memories are part of the story.

“Points of Departure” – an exhibition of photographs, stones and installation art works – brings together the forgotten and the unfamiliar in the hope of making the past less foreign. The exhibition will take place between April and June 2015 at National Library Building and is part of Singapore’s 50th National Day celebrations. Find out more at: http://www.pointsofdeparture.sg or https://www.facebook.com/PointsOfDepartureSG

This project was supported by the Singapore Memory Project (SMP) irememberSG Fund that aims to encourage organisations and individuals to develop content and initiatives that will collect, interpret, contextualise and showcase Singapore memories. The fund has currently stopped accepting applications. For more information, go to: https://www.iremember.sg/index.php/fund-intro/

Juria Toramae is a Singapore-based artist and engineer. Her photographic series “Temporality” debuted at Noise Singapore's The Apprenticeship Programme exhibition in 2013. She is an irememberSG fund recipient for her collaborative project titled “Points of Departure”.

Leong, M. (2011). The junk. In The ice ball man and other peoms. Singapore: Ethos Books. (Not available in NLB holdings).