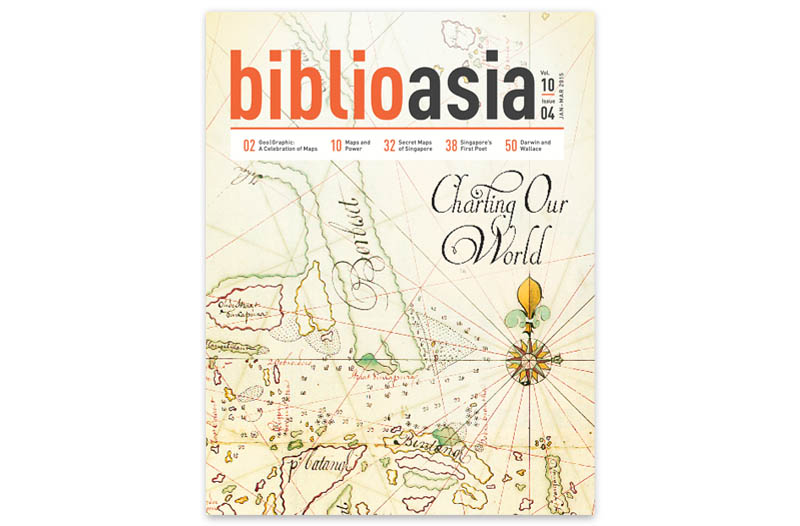 GeolGraphic: Celebrating Maps and Their Stories
“GeolGraphic”, a multi-disciplinary festival of exhibitions, installation artworks and lectures on the subject of maps takes place at the National Library from 16 January to 19 July 2015. Tan Huism explains why you should not miss this event. (PDF)

Maps as Statements of Power and Domination
Drawing from his personal collection of maps amassed over three decades, Dr Farish A. Noor invites us to truly read maps and look beyond their geographical boundaries. (PDF)

The Secret Maps of Singapore
Hidden temples and food haunts are just some of the things found in two psychedelic maps published in the 1980s. Bonny Tan explore the origins of these one-of-a-kind maps.(PDF)

On the Trail of Francis P. Ng: Author of F.M.S.R.
In her effort to republish one of our unknown literary treasures, Dr Eriko Ogihara-Schuck tracks down the elusive Francis P. Ng, author of possibly the first notable work of poetry in English by a Singapore writer. (PDF)

Darwin in Cambridge & Wallace in the Malay Archipelago
Research is still turning up new findings about the lives and science of Charles Darwin and Alfred Russel Wallace. Among other things, Dr John van Wyhe addresses the misconception that Darwin cheated Wallace of his rightful place in history. (PDF)

A Nation of Islands
Island Nation is a documentary project which captures the stories of Singaporeans who once lived on the Southern Islands of Singapore. (PDF)

Points of Departure: Charting Memories Through Collective Imaginations
“Points of Departure” is an exhibition that brings together the forgotten and unfamiliar in the hope of making the past less foreign. (PDF)

MusicSG: A Repository of Singapore’s Musical Heritage
Joy Loh provides the low down on MusicSG, a digital archive set up by the National Library Board to digitise, archive and provide access to all forms of published music works in Singapore. (PDF)