Poetry 101: It Does Not Have to Rhyme

One of this year’s Read! Fest initiatives is a celebration of Singapore poetry. Sharon Lim tells you what to expect.

Launched in 2014, Read! Fest is part of the National Library Board’s (NLB) nationwide reading campaign called Read! Singapore. The festival aims to encourage Singaporeans to re-discover books and the simple pleasures of reading.

Read! Fest Poetry puts the spotlight on the creative works of Singapore’s very own poets.

Poetry is a literary genre that few people truly appreciate or understand. Many people have misconceptions about poetry. They believe that poems have a deeper and hidden subtext that is somehow evident only to their creators or to rare individuals whose reading lists include the likes of Dickens and Proust; that poems must always rhyme; and that formal and flowery language is de rigueur. It is not surprising that many people have developed an abject fear of poetry, probably attributed to unpleasant memories of having to learn and recite poems by rote during literature lessons in school.

Read! Fest Poetry aims to expose more people to this under-appreciated literary genre by staging exhibitions and programmes that showcase Singapore poetry through novel and innovative ways. Many people would have heard of poets such as T. S. Eliot, Robert Frost and William Wordsworth, but how many are familiar with the works of homegrown poets such as Boey Kim Cheng, Ma Anbalagan, Fang Ran (方然) and S. N. Masuri?

Since approximately 50 percent of Singapore’s population commute via the MRT daily,1 NLB hopes to bring poetry to the people through an exhibition that will take place on the platforms of City Hall MRT station. Appropriately titled “Poetry on Platforms” (POP), poems by both Singaporean and Singapore-based poets will be featured on the station’s platform screen doors. Commuters will be able to read and mull over the poems in our four official languages while waiting for their trains to arrive.

In addition, the National Library Building on Victoria Street will also dress the walls of its lifts with visuals of selected poems. Hopefully, people will be engaged by the poems as they ride the lifts instead of staring at their toes (or mobile phones).

The poems were curated by NLB’s librarians and given the nod of approval by a selection committee chaired by Professor Edwin Thumboo, director of The Centre for the Arts, National University of Singapore. Included in the selection of poems are humorous, moving, poignant and thought-provoking ones on life, people and places in Singapore.

High economic growth and rapid urbanisation in Singapore over the years have resulted in myriad challenges for the city state, including the loss of its natural environment and cultural heritage. Many places and landmarks that older Singaporeans are familiar with are no longer around. Instead, taking over their places are gleaming glass-and-steel skyscrapers that tower over the city.

Singapore’s changing social and physical landscapes, along with the feelings of loss and despair over these changes, are depicted in poems such as《街变》(Street) by Zhou Can (周粲), 《看不见的节》(Tekka) by Dong Nong Zheng (董农政), “ராபின்சன் சாலைக் குழந்தைகள்” (The Children of Robinson Road) by K. T. M. Iqbal and “Change Alley” by Boey Kim Cheng:

Alley of change utterly changed.
The name of the place names
The lost decades, the places and times
Gone with our belongings, migrated
To the country of changelessness

It seemed he had come through the changes
Unchanged, searching still the place
For signs leading home, or out of the street
Emptying into loss, whichever turn he took.
And while he waited the country flipped
The book of changes; streets lost their names, the river forgot its source, …

All is utterly changed, the map useless
For navigation in the lost city. …

An excerpt from “Change Alley”
by Boey Kim Cheng

Naturally, Singaporeans’ passion for food and eating also figure prominently in the selection of poems, such as Tse Hao Guang’s “A Big Pile of Bak Chor Mee” (modelled after W. B. Yeats’ “The Lake Isle of Innisfree”) in which he waxes lyrical about Singapore dishes such as chilli crab, chwee kueh, naan, otak and laksa; “Snack” by Paul Tan; and《榴槤》(Civet Durian) by Fang Ran (方然), which describes the great lengths that people go to just for a taste of durian – even to the extent of pawning their used sarongs:

Even poems that are not specifically about food weave in some mention of our local cuisine: “Mencari Seorang Pemimpin?” (Looking for a Leader?) describes the prata sold along the streets of Joo Chiat,《街变》(Change) bemoans the loss of street stalls that used to hawk wanton mee and sweet potato soup, while “சங்கமம்” (Confluence) makes a passing reference to fish head curry and coconut chutney.

“Poetry on Platforms” will take place at City Hall MRT station from 16 July to 13 August 2015 to coincide with the National Day celebrations. All the poems featured in the exhibition will be compiled in a publication entitled SingaPoetry: An Anthology of Poems on Singapore. The book will be available at all libraries in August 2015.

“PoetryWalls” is organised by NLB in partnership with PoetryWalls-Singapore Ltd, an organisation that seeks to develop and promote Singapore poetry.

The exhibition will feature “poems on walls” by both established and emerging poets, including tertiary and secondary school students, as well as members of the public. The selected poems will be geographically and thematically diverse in content so as to showcase the breadth and depth of Singapore poetry, as well as to reach new audiences and foster a greater appreciation for local literary works.

PoetryWalls will be held at the lobby of the National Library Building from 29 August to 25 October 2015.

Other than showcasing poetry by established poets, Read! Fest Poetry also hopes to encourage the public to try their hand at creating their own poems. To be held in August 2015, “In Transit: Poetry x Illustration” provides an opportunity for budding poets and illustrators to be mentored by writer Felix Cheong and illustrator Eeshaun to create visually engaging poetry. The public will also have a chance to be “Poetry on Platforms” star poets when they submit their original poems to POP@nlb.gov.sg. The first 150 submissions will each receive a commemorative EZ-link card.

A “Poetry on Platforms” talk will be held on 25 July 2015 from 4 to 5 pm at the Visitors’ Briefing Room, Level 1 of the National Library Building. Poet Eric Francis Tinsay Valles and educator and literary critic Ian Chung will share their thoughts about the exhibition and its featured poems. The first 20 participants at the talk will also receive a commemorative EZ-link card. To register, please visit www.nlb.gov.sg/golibrary 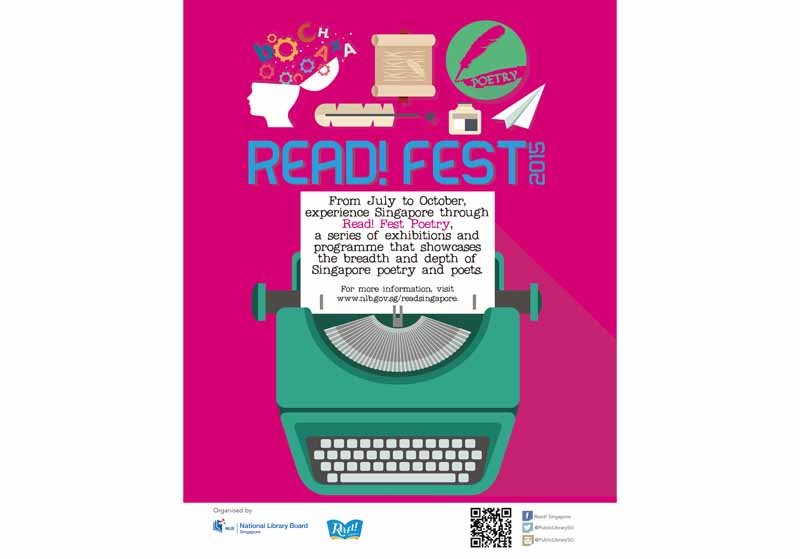 Sharon Lim is a Project Manager with the Exhibitions and Curation department at the National Library of Singapore.