The nation’s published heritage is preserved by the National Library for posterity. Ivy Lee reveals the aim of the Legal Deposit and shares highlights from the collection.

PublicationSG is a dedicated online catalogue of all physical materials found in the Legal Deposit Collection. All rights reserved, National Library Board, Singapore.

The Legal Deposit is not a new concept: it is an important function of national libraries all over the world. Legal Deposit helps build the national collection by ensuring that the country’s published heritage is systematically collected and preserved for posterity.

A secondary role is making the collection accessible to the public. Given the ephemeral nature of information in the Internet age, Legal Deposit is especially important as it is an archived collection and preservation system for Singapore’s print heritage, and in time to come, electronic and web content.

History of Legal Deposit in Singapore

The European origins of Legal Deposit can be traced to the Ordonnance de Montpellier (Ordinance of Montpellier) signed by King Francois I of France on 28 December 1537, when it was first applied as a mechanism to control and censor dissenting theologies. This legal instrument was expanded in the 16th century in order to build a national collection in France; it was subsequently adopted by several European countries such as Germany and Britain.

In Singapore, the Legal Deposit function has its roots in the British government’s Indian Act XI of 1835, which required printers and publishers to conform to rules governing public information. With the passing of the Book Registration Ordinance of 1886, the Raffles Library and Museum became the designated Legal Deposit library for all books published in the Straits Settlements (Singapore, Melaka and Penang). 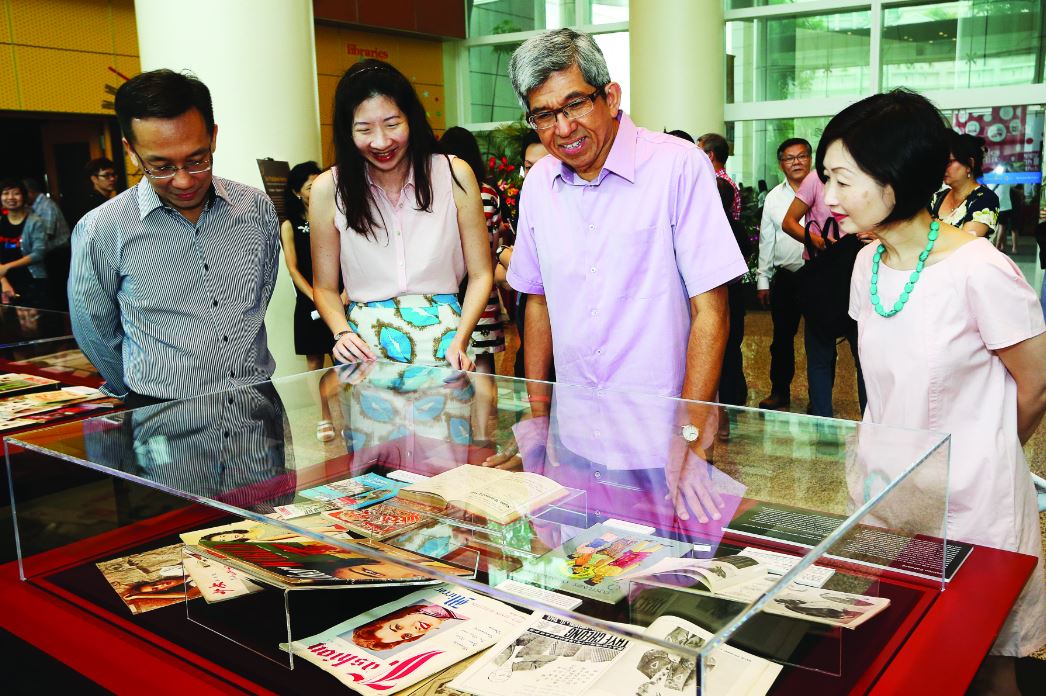 With the support of local publishers and writers, the National Library has been able to build up a robust Legal Deposit Collection comprising more than a million items over the years.

The collection provides a comprehensive picture of the local publishing scene, featuring materials that span across subjects ranging from the arts, culture and entertainment to politics, economics and science. The collection also includes an assortment of non-print formats – reflecting how technology has evolved over time – such as cassette tapes, video cassettes, floppy disks and compact discs as well as electronic publications in PDF, JPEG and MP3 formats.

Additionally, the Legal Deposit function also covers materials that have not been assigned International Standard Numbers. Under the National Library Board Act, the National Library is mandated by law to collect local publications without international standard numbers, but have been made available for public distribution. These include school magazines, publications from clans and associations, company annual reports, conference papers and proceedings, posters and even theatre programmes and exhibition catalogues.

The Legal Deposit Collections aims to provide researchers with a rich repository of primary and secondary research materials to draw on, and to also provide an accurate and complete picture of the printing and publishing sector in Singapore. All these could not have been possible without the support of the local publishing fraternity.

It is important to note that the Legal Deposit Collection is not an exclusive collection. While some of the publications deposited with Legal Deposit – in line with the National Library Board’s aim to provide interesting and useful publications to the public – are available for reference at the National Library’s Lee Kong Chian Reference Library, the board also purchases copies of selected titles for its 26 branches of the Public Libraries. 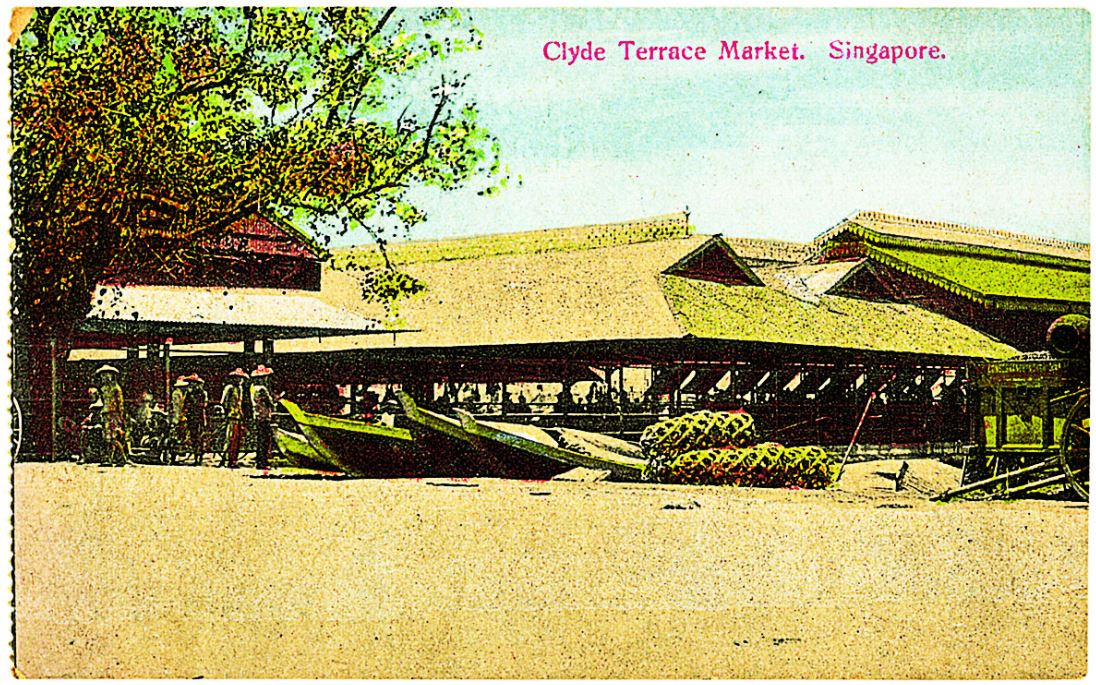 Clyde Terrace Market at the junction of Beach Road and Rochor Road in 1920. The programme booklet dating 29 March 1873 that commemorates the laying of the foundation stone is the oldest item deposited in the Legal Deposit Collection. Courtesy of Dr Cheah Jin Seng.

The Next Leap for Legal Deposit

In the Internet age, many libraries in the world have revised their Legal Deposit legislation to include the mandatory submission of electronic publications and web content. Countries that have extended the scope of their legal deposit framework include the United Kingdom, Australia, New Zealand, France, Denmark, Finland, Japan and Korea.

Selected highlights of the Legal Deposit Collection are currently on display at level 11 of the National Library Building until 29 February 2016.

Information on Legal Deposit and instructions on how to deposit print and digital content with the National Library can be found on Deposit Web at www.nlb.gov.sg/deposit. This portal also contains information on International Standard Numbers.

Launched in October 2015, PublicationSG is a dedicated online catalogue of all physical materials found in the Legal Deposit Collection, a rich archive of nearly 1.1 million items that is now available for public access. Serials and magazines comprise 70 percent of the collection, with 25 percent being books and the rest made up of audiovisual materials and maps as well as ephemera.
Members of the public can place reservations to view legal deposit items at $1.55 each at the information counters of the Lee Kong Chian Reference Library on levels 7–13 of the National Library Building, or via an online form on the National Library Board website at catalogue.nlb.gov.sg/publicationsg. The items can only be reviewed at designated work stations at the reference library. HIGHLIGHTS OF THE LEGAL DEPOSIT COLLECTION

The National Library launched an exhibition of its Legal Deposit Collection on 3 October 2015 – providing a peek into what matters occupied the minds of Singaporeans over the years. Here are some highlights.

1. Her World, July 1960
Launched in July 1960 by the Straits Times Press (now known as Singapore Press Holdings), Her World, which centres on fashion and beauty, women’s issues and lifestyle trends, has since established itself as the most popular women’s magazine in Singapore. Topics of interest in the debut issue discussed “family planning in Singapore” and “what my country means to me”, which supported the various national campaigns launched at the time. Fast forward 55 years: the idea of family planning in Singapore has evolved into quite a different picture today. It is also interesting to see how fashion, hairstyles and makeup along with subjects such as sexual mores and attitudes to work have evolved over the years.

2. Malayan Penfriends, September 1961
Before the advent of email, Whatsapp and social networking sites like Facebook, Instagram and Twitter, there was snail mail. The allure of making friends through letter-writing – with the possibility of friendship turning into romance – made pen pal correspondence one of the popular pastimes among youths in Singapore and Malaya. Malayan Penfriends is a Chinese publication featuring essays and compositions, as well as friendship columns with photos and addresses of young people seeking pen pals.

3. National Pioneer, 9 August 1969
The inaugural issue of the Singapore Armed Forces’ (SAF) Pioneer magazine was published as the National Pioneer on National Day in 1969. The foreword by then Minister for Defence Lim Kim San made reference to the “few thousand young men and women in our Armed Forces”, and said the bulletin would help members of the Armed Forces to be “enlightened and entertained”. Pioneer magazine, which has been in publication for 46 years, has since undergone many changes in design as well as content. Today, there is even a digital version to complement the print edition.

4. Farm School, 1967
It’s hard to imagine this today, but 50 years ago, Singapore had its own residential Farm School on Sembawang Road. It was set up in August 1965 as part of the Primary Production Department’s rural education programme for farmers and fishermen as well as teachers-in training from the Ministry of Education. These teachers were expected to teach in rural vocational schools that included farming subjects in the curriculum. The publication provides a glimpse of life as a stay-in student at the Farm School.

5. 50,000 Up: Homes for the People – A Review of Public Housing, 1965
This glowing report card for the Housing and Development Board (HDB) in 1965 noted that over 50,000 homes had been built for Singaporeans since the board was established in 1960. This was more than double the total achieved by HDB’s predecessor, the Singapore Improvement Trust (SIT), over a 30-year period. The publication also includes an opening message by then Prime Minister Lee Kuan Yew. In his trademark style, Lee expressed his disdain at the British for constructing imposing buildings and monuments “to impress the multitude with their superiority and to overawe their subjects into obedience” when Singapore was under colonial rule.

6. Ceremony of Laying the Foundation Stone of the Clyde Terrace Market at Singapore, the 29th Day of March, 1873
The oldest publication in the collection is a legacy from the Raffles Library: a programme booklet commemorating the foundation stone-laying ceremony of Clyde Terrace Market on 29 March 1873. The market was located on Beach Road and built over the sea to facilitate unloading of goods from tongkang (a type of light wooden boat) at high tide. This historical market was demolished in 1983 to make way for The Gateway, a set of two glass-and-steel towers that now stand on its site. 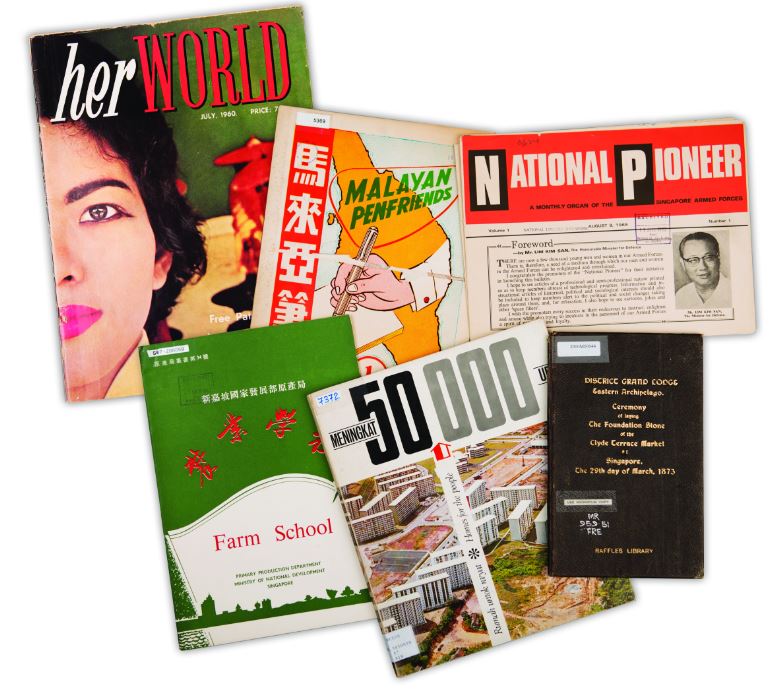