This useful index serves as the gateway to Singapore-related articles published in periodicals. Leong Hui Chuan and Chris Tang explain its value.

Have you ever had difficulty trying to recall an article you read in a magazine or journal but simply cannot remember the title of the article, or worse the name of publication? Fret not because with the National Library Board’s (NLB) new Index to Singapore Information (ISI), you can now search for articles about Singapore using selected keywords.

ISI is a collection of index records describing articles on or related to Singapore – or written by Singaporeans – in periodicals published in Singapore and overseas. (Note: ISI does not provide full-text access to the articles.)

As part of preparatory work for the ISI project, NLB librarians sieved through the library’s collection of periodicals for Singapore-related articles and then created an index record for each article to facilitate its search. Each index record includes key descriptions of the article, such as its title, author, subject, abstract, page numbers and the periodical title. With the ISI, there is no need to browse through physical copies of magazines and journals to look for specific articles. All the customer needs to do is access the ISI database and use the keyword search to locate articles on Singapore.

NLB’s existing online catalogue provides only basic information such as the periodical title, and volume and issue numbers, but not bibliographic details of the articles found in the periodicals. With ISI, NLB has improved the discovery of Singapore-related information by providing access to a rich digital database of indexed articles that would otherwise remain “hidden” within the periodicals. In essence, ISI aims to be the first-stop access point for Singapore- related articles published in academic and research journals and government periodicals, as well as lifestyle and entertainment magazines.

Since April 2016, the ISI database can be accessed from NLB’s OneSearch portal at search.nlb.gov.sg. The database currently contains almost 72,000 index records of English and vernacular-language articles from about 500 periodicals published since 1847 – and it is growing by the day.

A Tool for Both the Popular and the Academic

The ISI includes popular magazines such as Her World, 8 DAYS and Singapore Tatler. These magazines are usually not indexed by commercial databases whose primary focus is on academic and research journals. Moreover, much of the library’s collection of popular magazines do not exist in digital formats as they were published before the advent of the Internet. Even newer electronic databases that feature online magazines provide only the recently published issues of a title, and not past editions.

For researchers and historians, ISI serves as the gateway to articles on Singapore and Southeast Asia across the humanities and social sciences. These include important periodicals such as the National University of Singapore’s Journal of Southeast Asian Studies (1970 to the present) and the official publications of the Malaysian Branch of the Royal Asiatic Society, which ISI has indexed for all three incarnations of the society: the Straits Branch (1878–1922), the Malayan Branch (1923–63) and the current Malaysian Branch (1964 to the present).

The Journal of the Indian Archipelago and Eastern Asia – referred to as Logan’s Journal after its well-known editor James Richardson Logan – holds the distinction of being the oldest periodical indexed in ISI. Published between 1847 and 1859, this 12-volume journal covers a comprehensive sweep of topics, including history, language, literature, ethnography, natural history, physical science, topography, agriculture and economics, and is now part of the National Library’s Rare Materials Collection.

Origins of the ISI

ISI has its roots in an indexing service called the Singapore Periodicals Index (SPI) launched by the National Library in 1969. SPI indexed articles from English, Chinese, Malay and Tamil periodicals published in Singapore, and was first produced as a print publication in 1969. This printed form was issued annually until 1993. Between 1995 and 2006, the SPI was produced in CD-ROM format. In 2006, the SPI was renamed Index to Singapore Information and was developed and used largely as an in-house resource database until April this year when it was made publicly available.

Moving forward, there are plans in the pipeline to enhance ISI as a Singapore resource database by including the index records of book chapters about Singapore. One of the biggest limitations in growing ISI as a service is that it does not provide full-text access to the articles. Indexing may seem archaic in the Google era, but there are distinct advantages: ISI uses English keywords and subject terms to index non-English articles, thereby extending their reach to a wider global audience. NLB is confident that ISI can continue to serve as a conduit between Singapore content and information seekers, and remain relevant in the years ahead. 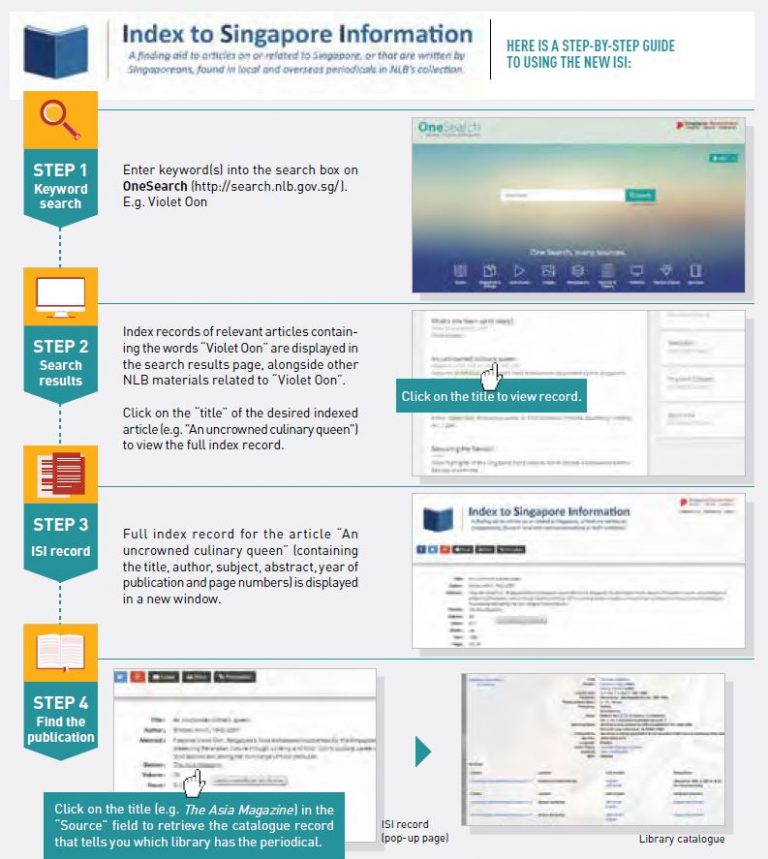 Leong Hui Chuan is an Associate Librarian at the National Library, Singapore. Her responsibilities include the digitisation of library materials, digital content management as well as oversight of the Index to Singapore Information service.

Chris Tang is a Manager at the National Library, Singapore, where he oversees digitisation and digital content management. Chris was previously involved in business reference service as well as the management of the policies and operations of the National Library’s donor collections.
Back to Issue