Stories told by grandparents, the saga of Eurasians in Bahau, and forgotten foods of the past are some of the highlights of this special issue. 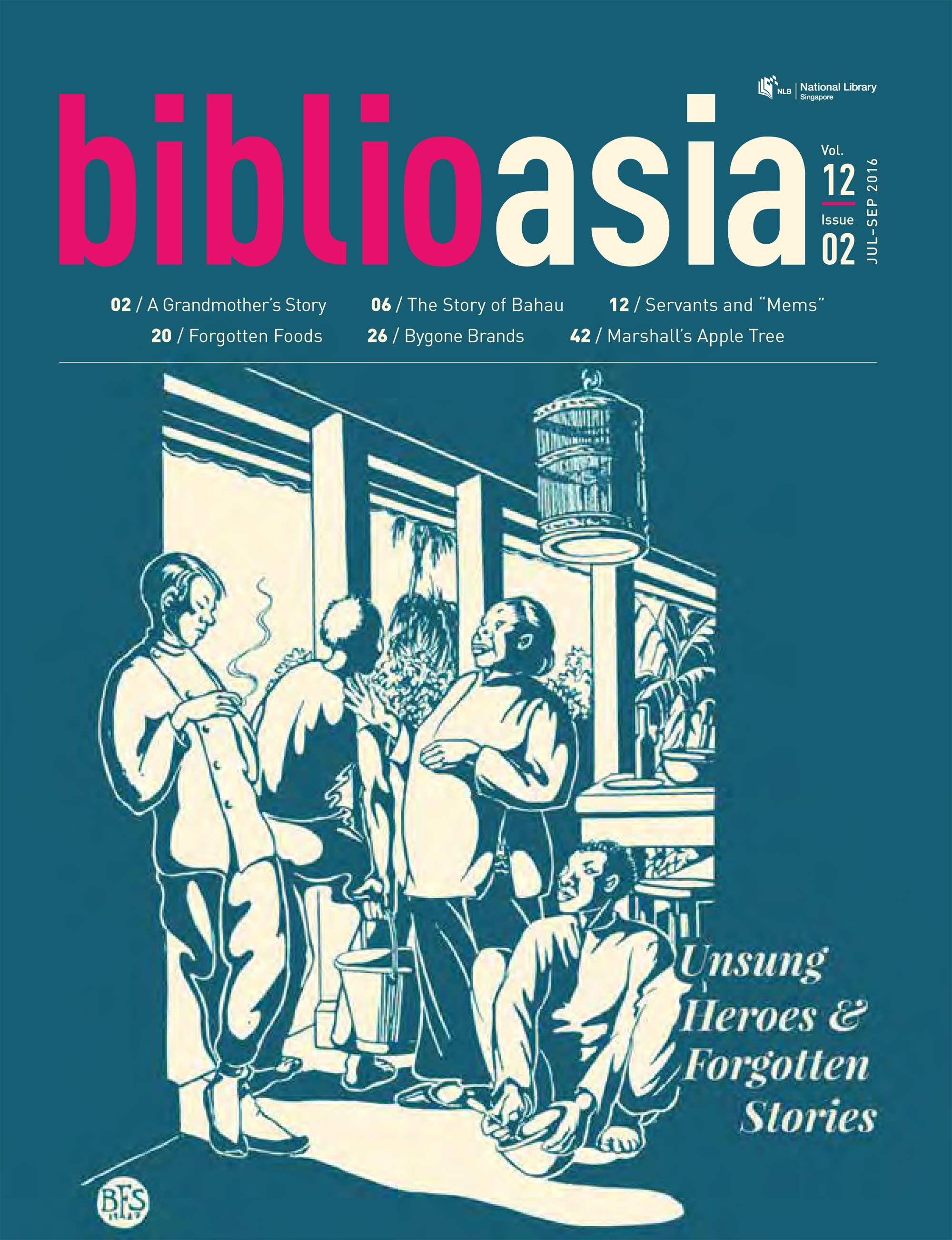 My Grandmother’s Story
An unexpected recollection by her grandmother about her experience of the Japanese Occupation sets Yu-Mei Balasingamchow thinking about unspoken memories and the stories that haven’t been told. (PDF)

Bahau: A Utopia That Went Awry
The resettlement of Eurasian and Chinese Catholics in the jungles of Malaysia during World War II has been largely forgotten. Fiona Hodgkins chronicles its painful history. (PDF)

Mem, Don’t Mess with the Cook!
European families in colonial Singapore had a retinue of servants – cook, chauffeur, nanny, gardener and houseboy – but this did not guarantee a life of ease, as Janice Loo tells us. (PDF)

Forgotten Foods & Mealtime Memories
Food writer Sylvia Tan remembers the foods and flavours she grew up with and the less than sanitary practices made for stomachs cast in iron. (PDF)

Bygone Brands: Five Names That Are No More
Sue-Ann Chia traces the birth and death of five companies, reliving the forgotten stories of some of Singapore’s biggest brand names. (PDF)

Singapore’s First Japanese Resident: Yamamoto Otokichi
A sailor travels halfway around the world in his attempt to return home, and becomes the first Japanese resident in Singapore in the process. Bonny Tan tells the story. (PDF)

Beach Road Camp and the Singapore Volunteer Corps
The SVC was the precursor of the first organised military service in Singapore and marked the beginning of a volunteer movement that would last for over a century. Francis Dorai has the story. (PDF)

The Fruit of His Labour: David Marshall’s Old Apple Tree
Singapore’s fiery Chief Minister used to hold court under an apple tree at Empress Place. But was it really an apple tree? Marcus Ng separates fact from fiction. (PDF)

Angels in White: Early Nursing in Singapore
In the 1820s, some “nurses” in Singapore were actually chained convicts. Pattarin Kusolpalin chronicles the history of nursing from 1819 until Independence. (PDF)

Best Non-Fiction Book of the Year 2016
Through the Lens of Lee Kip Lin: Photographs of Singapore 1965-1995 – a pictorial book published by the National Library Board in partnership with Editions Didier Millet – clinched top honours recently in the non-fiction category at the Singapore Book Awards. A total of eight awards, which recognises the best in Singapore’s publishing scene, were given out on 11 May 2016. (PDF)