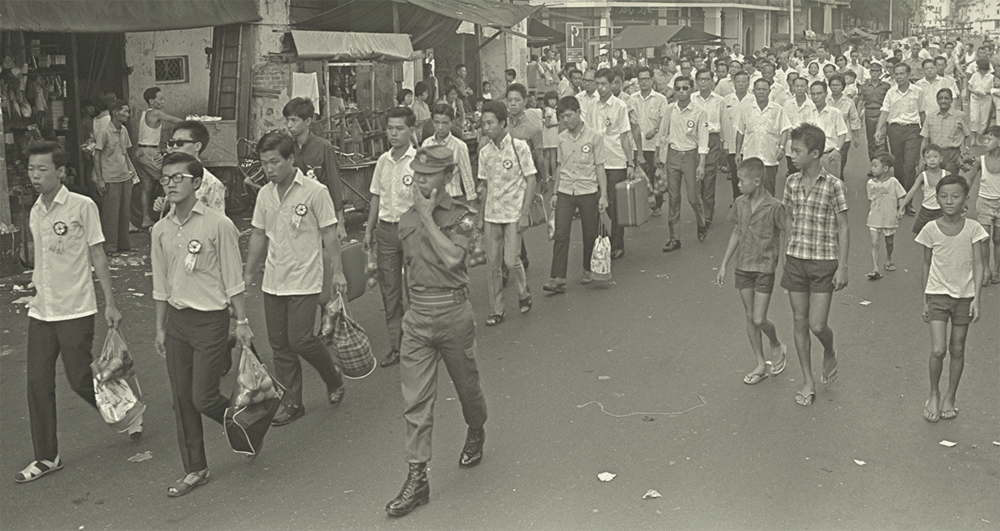 National Service recruits at the Telok Ayer Constituency being sent off in this photo taken on 3 September 1967. Ministry of Information and the Arts Collection, courtesy of National Archives of Singapore.

Singapore celebrates 50 years of National Service in 2017. The compulsory enlistment of soldiers was introduced in 1967 with the passing of the National Service (Amendment) Act on 17 March that year.1 This was not the first time the government had tried to implement a mandatory conscript service. In May 1954, the British attempted to introduce National Service but the move was met with violent protests by Chinese middle school students – later known as the National Service Riots of 1954 – who refused to support the colonial government.2

The Need for National Service

When Singapore separated from Malaysia on 9 August 1965, the island-state saw the need to beef up its security with a conscript service. This would supplement the skeletal military forces comprising 1 SIR and 2 SIR (1st and 2nd Battalion, Singapore Infantry Regiment) and the PDF (People’s Defence Force). The withdrawal of the British army in the late 1960s would only underscore the need for Singapore to have a military that could be reckoned with.

As founding Prime Minister Lee Kuan Yew described it: “We thought it important for people in and outside Singapore to know that despite our small population, we could mobilise a large fighting force at short notice.”3

As Singapore was not large or wealthy enough to support an effective full-time military force, the option was to have a regular corps supplemented by a conscript reserve.4 However, both Lee and then Minister for Defence Goh Keng Swee were aware that conscription would not be well received by the public. They believed that education was the key to changing the people’s mindset. Among other things, the National Police Cadet Corps and National Cadet Corps were established in secondary schools as a co-curricular activity, helping to prepare teenage boys for National Service and inculcate a sense of patriotism. By 1972, some 90 percent of secondary schools were participating in the cadet corps.5

The government’s strategy to convince the public of the importance of having a strong national defence worked. Although anti-National Service protests broke out on 17 March 1967 on the back of the government announcement three days earlier, these were not as serious as the riots that took place in 1954.6

On 17 August 1967, the first batch of 9,000 male youths born between 1 January and 30 June 1949 were enlisted for National Service.7 The pioneer batch of 900 men were conscripted into the Army’s 3rd and 4th SIR for two-year full-time National Service, while the rest served part-time in the PDF, Special Constabulary and Vigilante Corps.8

HIGHLIGHTS OF THE LEGAL DEPOSIT COLLECTION

Over the years, the National Library has collected – via Legal Deposit – various published materials relating to National Service in Singapore. These include orientation handbooks for recruits, parents’ handbooks, code of conduct guidebooks, commemorative publications as well as personal accounts by former recruits of their National Service experience. Here are some highlights from the collection:

National Service and You (1967) [Call no.: RCLOS 355.2236095957 SIN]
Published in the four official languages, these booklets answered basic questions such as what National Service is, how to register, how to request for a deferment, penalties for failing to report and how to apply for an exit permit.

Code of Conduct for the Singapore Armed Forces (1967) [Call no.: RCLOS 355.13 SIN]
This booklet clearly lists out the rules that recruits had to abide by at all times, such as not talking or boasting about their vocation, not drinking alcohol excessively and the importance of safeguarding confidential information.

My Son – The NS Man: What Parents Should Know About NS (1990) [Call no.: RSING 355.2236095957 MY]
This handbook provides parents with a better understanding of the National Service experience and the roles that their sons would play in contributing to the defence and security of Singapore.

Michael Chiang’s Hit Play, Army Daze: From Real Blur to Real Men (1996) [Call no.: RSING 355.1095957 CHI]
This comic book is based on the well-known play of the same title by Michael Chiang. It tells of the coming of age of six boys from diverse backgrounds as they experience army life together.

Shoulder to Shoulder: Our National Service Journal: Commemorating 35 Years of National Service (2002) [Call no.: RSING 355.223095957 KOH]
In the Foreword to this commemorative book, then Prime Minister Goh Chok Tong wrote that “our National Servicemen have provided the bedrock of peace and stability upon which we have built our economy and society”.

With Pride We Lead : 21 Strategies to Lead, Excel and Overcome As An NSF (2015) [Legal Deposit Collection]
Author Victor Lim (using the moniker Vic Van Dam) shares his personal account of the National Service experience, including tips on how to excel as a soldier.