In this issue, we discover how fake news is old news, we learn about Singapore’s most notorious murders and we examine the local fascination with horror stories. 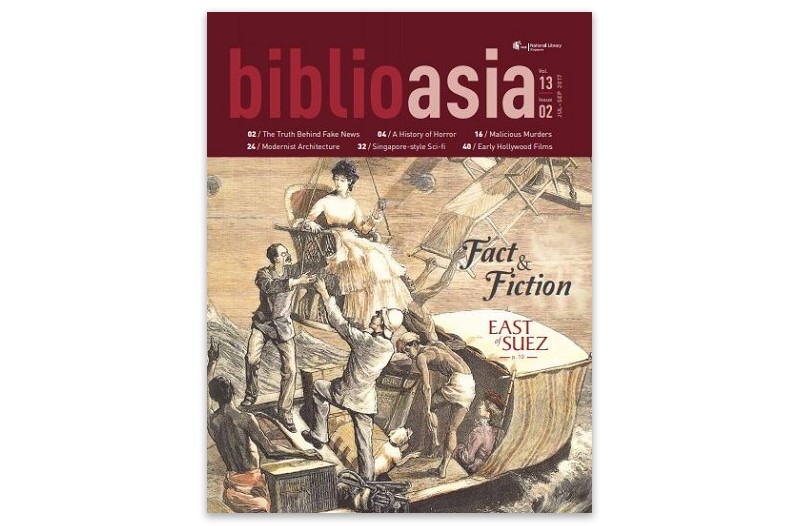 Fake News: Since When Was It News?
Lying, as it appears, is as old as history. Farish A. Noor explains. (PDF)

A History of Singapore Horror
Singaporeans have always had a morbid fascination with the supernatural. Ng Yi-Sheng examines the culture of horror in our oral folklore, books and films. (PDF)

East of Suez: The Mystique of Travel
Rudyard Kipling coined the phrase “East of Suez” to describe the exotic lands east of the Suez Canal. Kennie Ting goes back to a time when people were travellers, not tourists. (PDF)

Swan & Maclaren: Pioneers of Modernist Architecture
Singapore’s oldest architectural firm may be better known for designing the Raffles Hotel but it’s their 1930s Modernist buildings that are truly revolutionary. Julian Davison has the details. (PDF)

Sci-Fi in Singapore: 1970s to 1990s
The sci-fi frenzy took off in Singapore in 1978 when Star Wars was screened at cinemas here. Nadia Arianna Bte Ramli looks at sci-fi works produced between 1970s and 1990s. (PDF)

Reel Life Singapore: The Films of Clyde E. Elliott
Clyde Elliott was the first Hollywood director to shoot a feature film in Singapore. Chua Ai Lin examines the authenticity of the three movies he produced here in the 1930s. (PDF)

An Unusual Ambition: The Early Librarians
Bonny Tan traces the careers of little-known librarians, Padma Daniel and her mentor Kate Edith Savage-Bailey, and the circumstances that led to their career choices in pre-war Singapore. (PDF)

Heaven, Earth and Brotherhood
Secret societies arrived on the back of mass migrations of Chinese to Asia in the colonial era. Makeswary Periasamy highlights the National Library’s collection of early books on Chinese triads. (PDF)

Tales of the Malay World: Manuscripts and Early Books
Literary works in the ancient Malay-speaking world were not enjoyed silently but read aloud to an audience, as Tan Huism tells us in this latest exhibition by the National Library. (PDF)