The Way We Were: Fashion Through the Decades

Singapore has emerged as a leading Asian fashion capital in recent years. Zoe Yeo tracks its evolution through fashion publications from the Legal Deposit Collection.

Among other things, Singapore’s multicultural and multi-ethnic society is reflected in the clothing we wear. The first ever official census conducted in 1824 recorded 10,683 residents, comprising 74 Europeans, 15 Arabs, 4,580 Malays, 3,317 Chinese, 756 Indian natives and 1,925 Bugis.1 When the intrepid 19th-century travel writer Isabella Bird first stepped foot in Singapore in 1879, she was amazed at how the city was “ablaze with colors and motley with costume” and how the attire worn by locals made up “an irresistibly fascinating medley”.2

The fashion scene in Singapore today is starkly different from what Bird witnessed in the 19th century but one thing hasn’t changed: the Singaporean woman’s penchant for dressing well and keeping up with the latest fashion. Looking through the National Library’s Legal Deposit Collection of fashion magazines and books published in Singapore over the past several decades, one is able to study changing trends not only in dress, but also hair and makeup.

Up until the 1950s, traditional attire was a common sight on the streets of Singapore. Wearing Western-style clothes was the preserve of those who had studied or travelled overseas, or who were wealthy enough to buy imported fashions sold at a handful of high-end boutiques.3

With comfort as a priority, Malays preferred loose clothing to combat the humid weather – the baju kurong (or kurung) being the traditional attire of choice for both men and women.4 Men wear the baju kurong ensemble of loose-fitting shirt and pants with a sampin or sarong-like wrap around the waist, while women pair their knee-length top with a matching skirt in the same material. The women’s version is intricately embroidered with motifs such as those seen in Baju Kurong Sulam Modern (1952), a pattern book of popular embroidery designs inspired by flowers and birds. According to the author, C. Mahat, it is crucial to pick the right colour palette for the embroidery so that the colours do not clash. 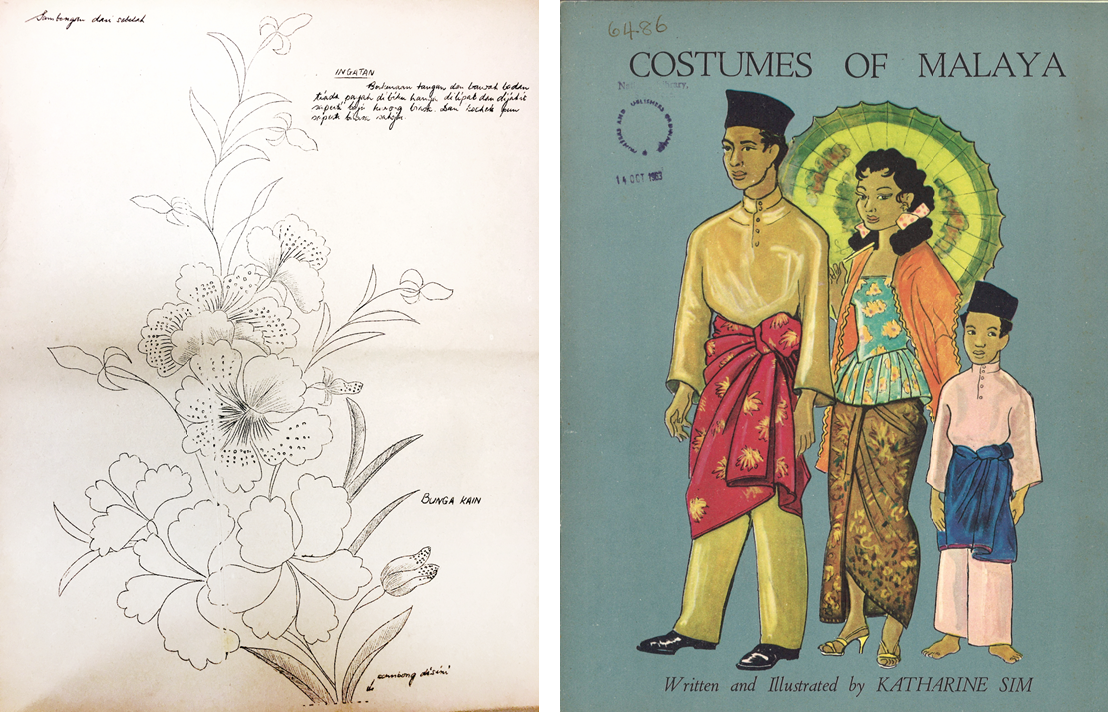 In the eyes of author Katherine Sim, the sari (or saree) worn by women of the Indian subcontinent was the most graceful of costumes, with its flowing lines and sculptured look. The cheongsam worn by Chinese women, on the other hand, was the most provocative, as it “shows off a woman’s figure to the highest degree possible… short of a bikini”. Sim’s illustrated book, Costumes of Malaya (1963), provides vivid descriptions of the fashion scene and traditional attire worn by different racial groups in post-war Singapore.

Following World War II, women’s roles in society changed drastically. In 1948, women were given the right to vote and, in 1961, the Women’s Charter was passed to improve and protect the rights of females in Singapore.5 As more women found employment in the workforce and their spending power increased, fashion choices broadened to include work attire, which in turn encouraged foreign brands to enter the local retail market.

Although cinemas had been around in Singapore since the early 1900s, it was the advent of television in 1963 that inspired local women to follow the latest trends seen in the media, most of which were influenced by Western movies and celebrities. Women’s fashion magazines started appearing in Singapore to cater to the increasing appetite for fashion news and trends.6

Fashion was the title of the first Malay weekly fashion magazine published in Malaya. The kebaya designs featured in the magazine had a more defined silhouette accentuated with interesting necklines and elements borrowed from Western-style dresses. The fashion-forward kebaya designs also borrowed from other ethnic costumes, such as the body-hugging cheongsam with Chinese frog buttons. 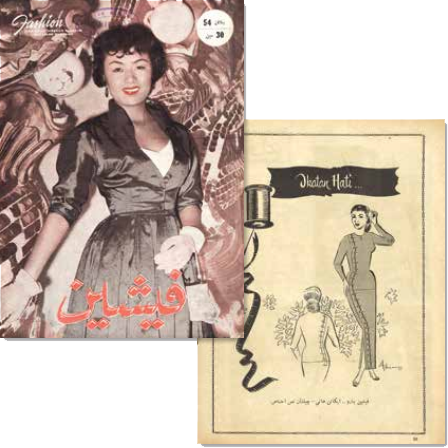 This is the cover of the 20 February 1955 edition of Fashion, the first Malay weekly fashion magazine published in Malaya. On page 18 of this issue is a cheongsam-inspired body-hugging kebaya with Chinese frog buttons. All rights reserved, C. Mahat. (1955, February 20). Fashion. Singapore: R. M. Yusoff Ahmad: Harmy.

Fashion Mirror was one of the pioneering publications that featured content on local fashion. First published in 1958, it was one of the most popular magazines among women in Singapore with articles specially written for Malayan readers. The magazine showcased clothing that was influenced by Western culture and infused with a dash of local flavour. One such outfit was the Chinese samfu, a blouse-and-trouser pairing using modern fabrics enhanced with “border” designs to create a “novel and striking effect”, as seen in the May–June 1959 issue.

Her World, launched in July 1960 and one of Singapore’s longest-running women’s magazines, was touted as being “packed with features on beauty, babies, things to make for your home, exercises for your figure, exciting new recipes, cheongsams, sarong kebayas”. The inaugural issue informed readers that the Western dress was the preferred attire among young ladies in university – as opposed to traditional costumes – as it was less restrictive and more comfortable to wear. The October 1961 edition featured a sarong kebaya that had been given a sartorial twist with Spanish-influenced “wide billowy bishop sleeves caught in cuffs at the wrist”. 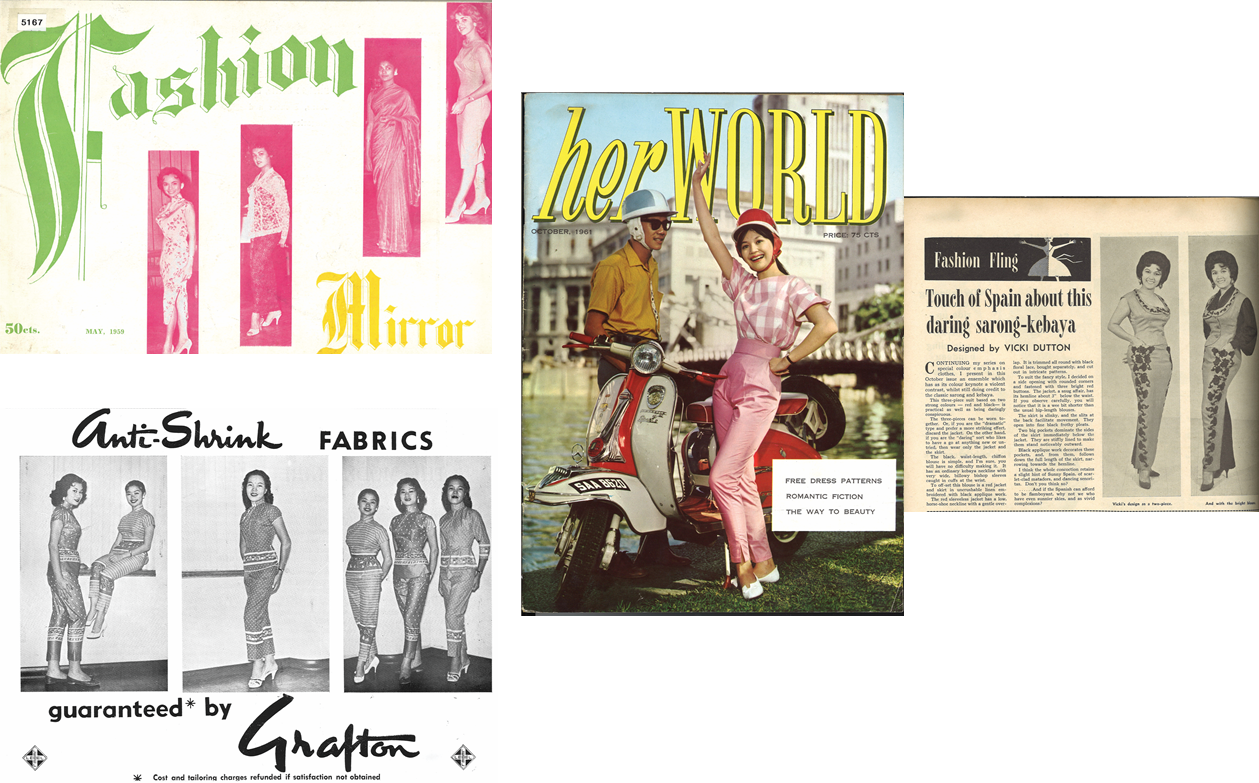 (Left) Fashion Mirror was one of the most popular magazines in Singapore during its time with its emphasis on local fashion trends. Featured on page 16 of the May–June 1959 issue is a modern version of the traditional Chinese samfu using a special anti-shrink fabric. All rights reserved, Princess Enterprises. (1959, May–June). Fashion Mirror. Singapore: Princess Enterprises.
(Right) Her World, first launched in July 1960, is one of Singapore’s longest-running women’s magazines. The October 1961 edition – with Margaret Mok on the cover – featured on page 10 a sarong kebaya with Spanish-influenced “wide billowy bishop sleeves caught in cuffs at the wrist”. All rights reserved, Straits Times Press. (1961, October). Her World (p. 10). Singapore: Straits Times Press (Malaya) Ltd.

As Western culture made greater inroads into the local fashion scene, tailors who could replicate designs seen on television and film, and in fashion magazines were highly sought after by both women and men.7 The first public fashion showcase for men was held in 1961 by the Singapore Merchant Tailors Association. The aim was to introduce the latest trends in bespoke suits to local consumers, “to show off” the high standard of tailoring in Singapore, and to improve dress sense among men. The publication, produced in conjunction with the event, featured on its cover a Western-style evening jacket that had been given an ethnic spin with batik material.

The popularity of made-to-measure clothing also led to a demand for sewing and tailoring classes. Mui Goi Ladies Dress-Making & Embroidering Institution was one of the pioneers offering dressmaking lessons in the 1950s and 1960s. To celebrate its ninth anniversary in 1962, a special exhibition of students’ works was held in the school. These works were subsequently featured in a commemorative publication.

To cater to the increasing interest in fashion, dress design and dressmaking classes were introduced by the Adult Education Board in 1963. A total of 1,508 students were enrolled in the first and second batches of the six-month course. Their works were showcased in a souvenir magazine published in 1965.

Budding fashionistas also turned to dress pattern publications such as Lucky Fashion Magazine (幸福时装杂志) and Shee Zee Fashion (旭日 时装) for inspiration. The inaugural issue of Lucky Fashion Magazine published in June 1965 proved so popular that it sold out within a few weeks, and went into three reprints before the second issue was published a year later. Home economics teachers also used the magazine as reference material for their sewing and handicraft lessons in school. Shee Zee Fashion, a publication of Shee Zee Institute of Tailoring, featured outfits designed for tropical weather such as the miniskirt, the 1960s runaway best-seller by British fashion icon Mary Quant.8 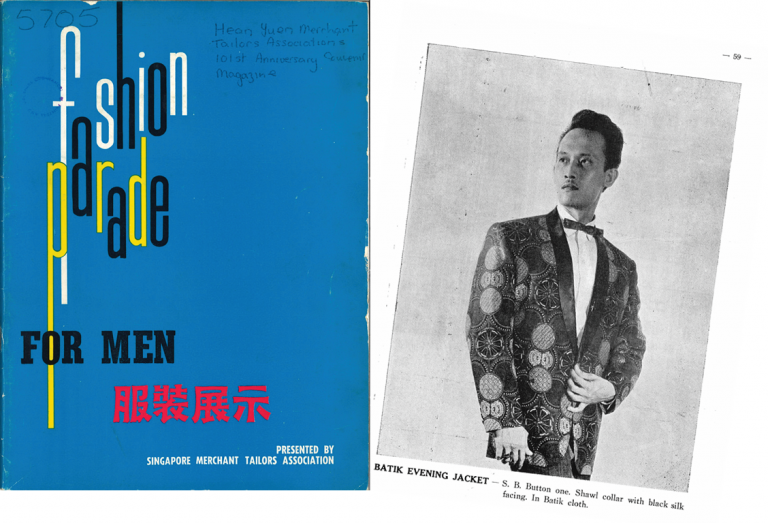 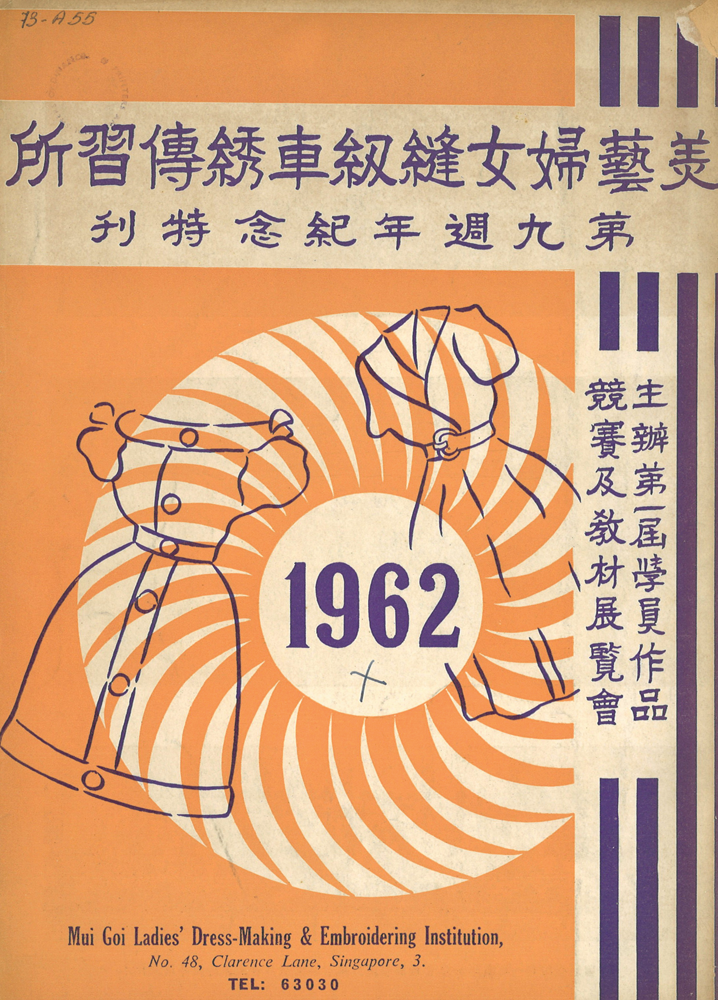 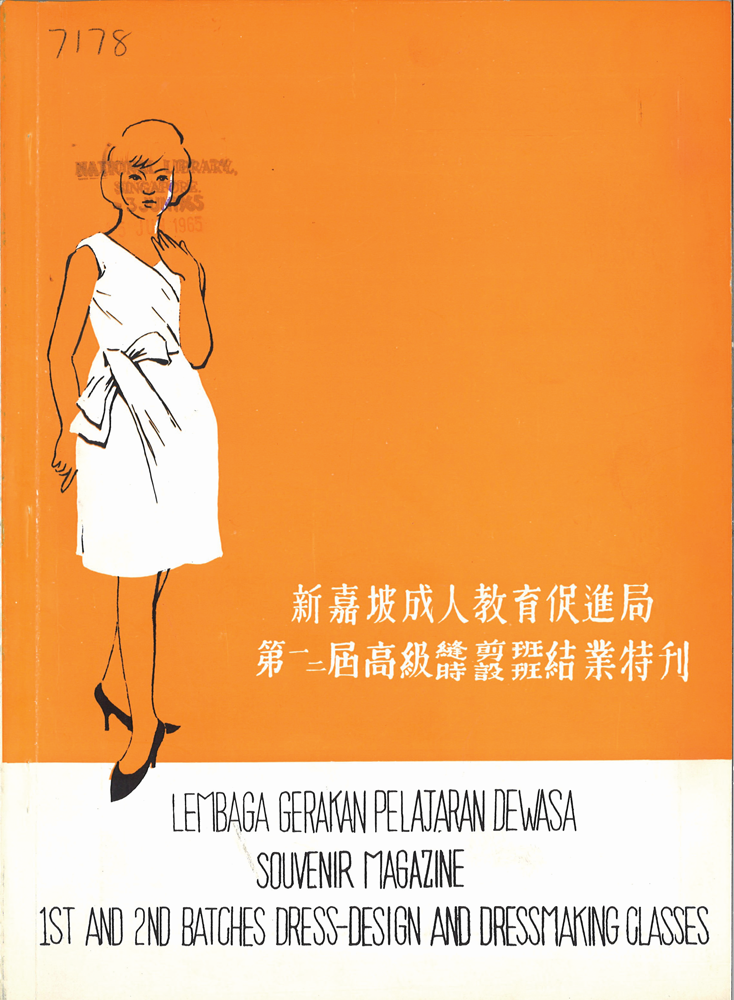 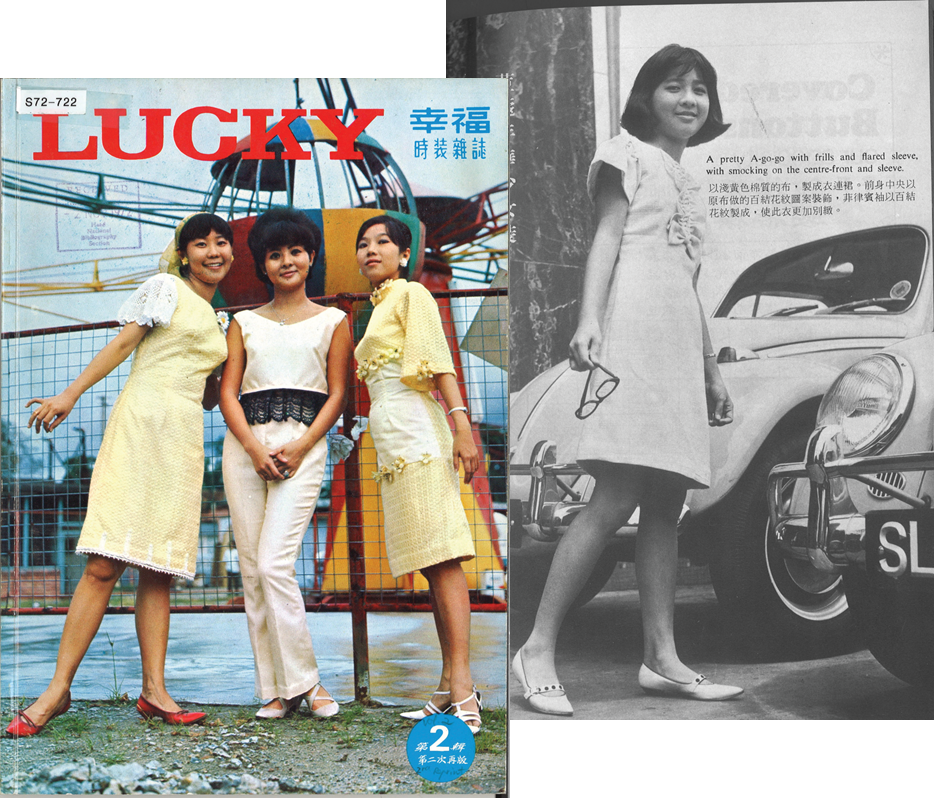 The dress patterns in Lucky Fashion Magazine provided the inspiration for many budding fashionistas to sew their own clothes. It was also used by school teachers as reference material for their sewing and handicraft lessons. Outfits showcasing the popular “A-go-go” style of the early 1970s are featured in this second issue of the magazine. This dress on page 31 is described as “a pretty a-go-go with frills and flared sleeves, with smocking on the centre-front and sleeve”. All rights reserved, Far Eastern Culture Co. Ltd. (1965). Lucky Magazine of Fashion and Multi-Knotted Decorative Designs (幸福时装杂志) (p. 31). Singapore: Far Eastern Culture Co. Ltd. 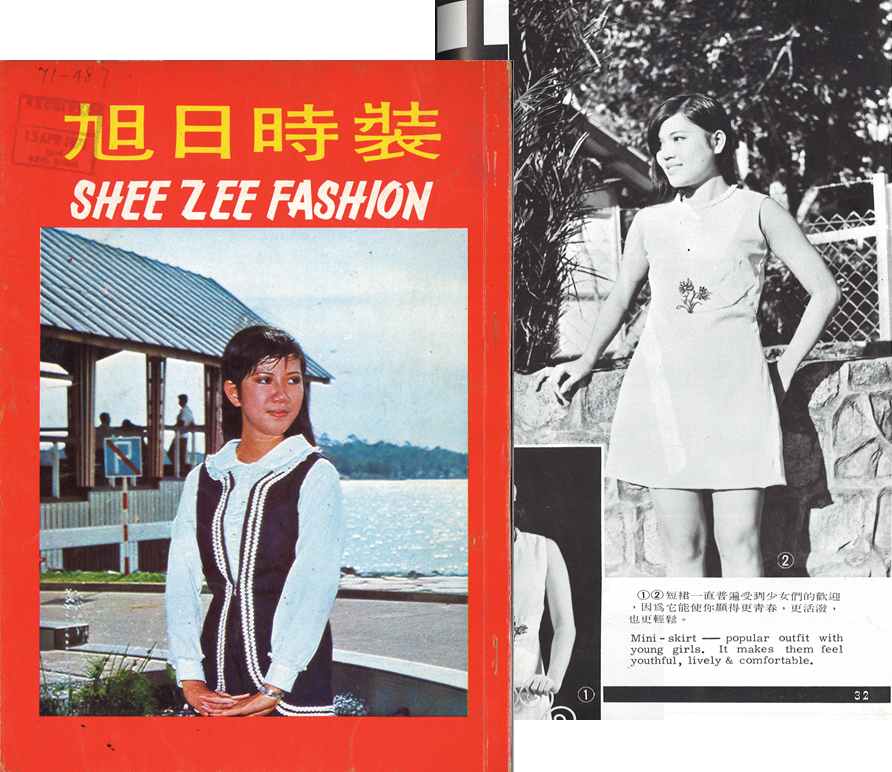 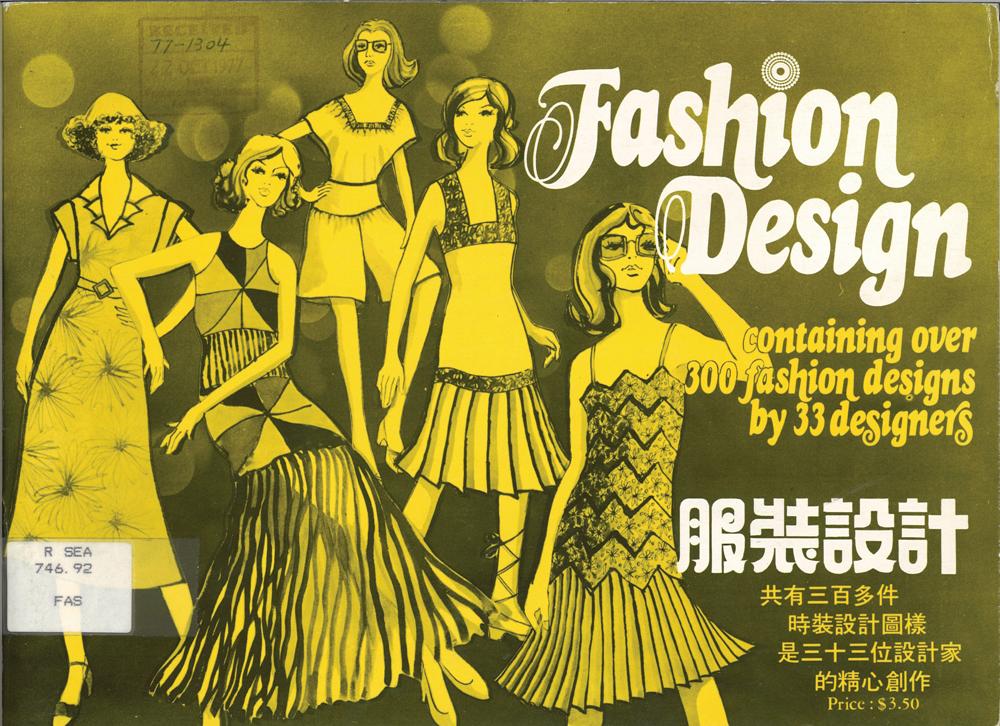 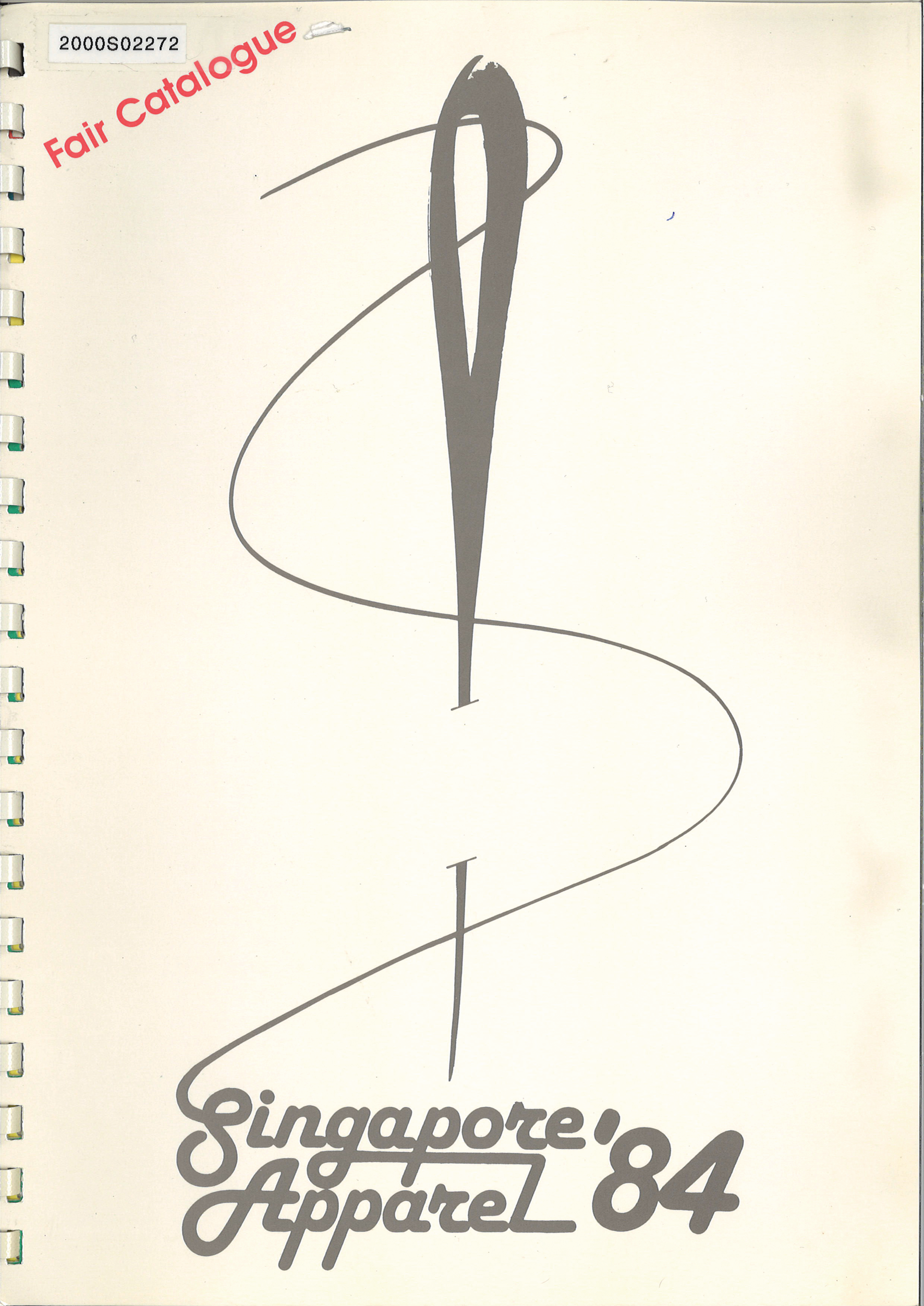 The second instalment of the Singapore Apparel exhibition was held in November 1984 after a successful inaugural launch in 1983. The 1984 event was said to be a testimony of the “enthusiasm, creativity and talents of people in the trade” and aimed to establish the “Made-in-Singapore” hallmark of quality and reliability. All rights reserved, Singapore Apparel: Fair Catalogue. (1983). Singapore: Singapore Textile and Garment Manufacturers’ Association.

Singapore on the World Fashion Map

The local fashion industry received another boost in the 1970s when the manufacturing sector took off in Singapore. The opening of Japanese departmental stores, such as Yaohan, Isetan and Sogo, also enlivened the local shopping scene. Ready-to-wear outfits were sold in department stores and shopping centres that sprang up all over the island.9

In 1977, a group of 33 local designers collaborated to produce a book showcasing their works. Titled Fashion Design: Containing Over 300 Fashion Designs by 33 Designers, it was the first of its kind in Singapore. As opposed to the “fanciful dresses from foreign countries [that] are not acceptable to the great majority of people here,” the creations featured in the publication were appropriate for the local climate and tailored to fit the petite Asian silhouette.

As homegrown labels grew in tandem with fashion imports, efforts were made to put Apparel ’83, the city’s first industry-wide garment trade show promoting local labels and designers, was hailed as a resounding success.10

In October 1983, The Straits Times reported that Singapore-made apparel had led to a $20-million increase in exports for the first eight months of the year, raking in more than $1.1 billion worth of sales for the year.11 Local designers were cultivating a global audience and putting Singapore on the world fashion stage.12

Singapore has since set its sights on becoming the fashion capital of Asia.13 The Singapore Fashion Festival was launched by the Singapore Tourism Board in 2001 to help achieve that goal. The festival was held annually until 2009, when it took a one-year hiatus, and was rebranded as the Asian Fashion Exchange (AFX) in 2010.

The efforts seem to have paid off. In 2011, Singapore was ranked number eight in the list of Top 50 Fashion Capitals in the World by the US-based Global Language Monitor. Although the city dropped to number 14 (out 56 fashion capitals) in 2015, it was the third highest-ranked Asian city, after Tokyo (number 10) and Hong Kong (number 12)16 – a lofty status it aims to maintain or better in years to come.