Making their mark in black and white, the Chettiars of Market Street and the contribution of the Scots in Singapore are some of the highlights of this issue. 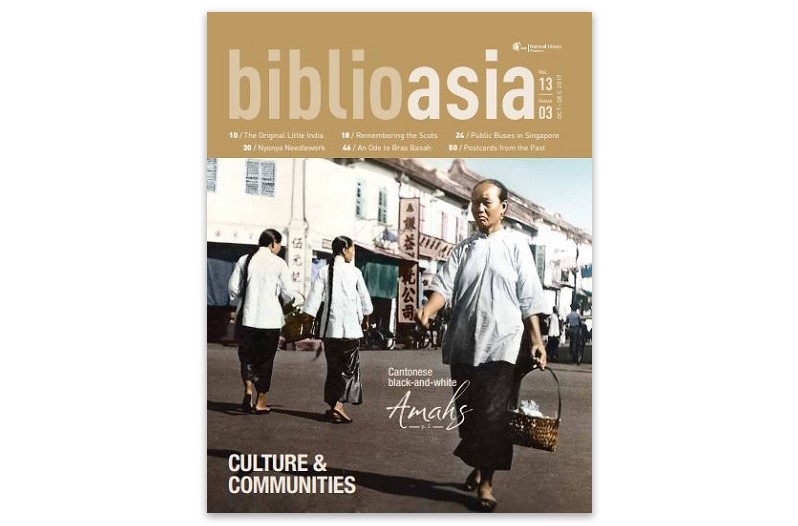 A Lifetime of Labour: Cantonese Amahs in Singapore
The black-and-white amah, renowned for her domestic skills, has left a mark on history in more ways than one, as Janice Loo tells us. (PDF)

Micro India: The Chettiars of Market Street
Market Street, in the heart of the business district, is where Indian moneylenders ran a thriving trade during the colonial era. Marcus Ng traces the imprint left by the Chettiars. (PDF)

Scots in Singapore: Remembering Their Legacy
The Scots in colonial Singapore lent their names to many of the city’s famous landmarks. Graham Berry pays tribute to the contributions of his fellow men. (PDF)

The Road to Nationalism: Public Buses in Singapore
From as many as 11 bus companies to just one bus operator by 1973. Lee Meiyu chronicles the early turbulent days of Singapore’s bus industry. (PDF)

Nyonya Needlework and the Printed Page
Cheah Hwei-Fe’n examines the impact of print media on the time-honoured craft of Peranakan embroidery and beadwork. (PDF)

A Tale of Two Churches
Penang’s Armenian church was demolished in the early 1900s while the one in Singapore still thrives. Nadia Wright looks at the vastly different fates of these two churches. (PDF)

Early Malay Printing in Singapore
Mazelan Anuar tracks the rise and decline of Malay printing and publishing in 19th-century Singapore, and profiles two of the most prolific printers of that period. (PDF)

The Symbolism Behind the Third Charter of Justice
This legal document – issued by the colonial government in 1855 – is an integral part of Singapore’s constitutional history. Kevin Khoo explains the significance of its elaborate borders. (PDF)

Rambling Around Bras Basah
It’s just a street to many, but for Yu-Mei Balasingamchow, the Bras Basah area is emblematic of how redevelopment can sometimes radically change the identity of an area. (PDF)

从馆藏文献资料认识中医药在新加坡的历史与发展
Traditional Chinese medicine in Singapore has a history that goes back to more than a century. Vicky Gao traces its development through the National Library’s collection. (PDF)

The Way We Were: Fashion Through the Decades
Singapore has emerged as a leading Asian fashion capital in recent years. Zoe Yeo tracks its evolution through fashion publications from the Legal Deposit Collection. (PDF)