Manuscripts from Our Global Past

An exhibition of old Southeast Asian writings showcases the region as a major centre of learning. Farish A. Noor explains why we should reclaim our heritage.

When does a piece of writing become “global literature” or “world literature”? The question may seem to be as old as writing itself, but it is in fact historical. And it has as much to do with the manner in which the English language has become globalised as a result of Britain’s colonial past as it does with the way in which the literature of other parts of the non-English-speaking world has been relegated to the margins of the exotic and foreign.

In the course of this long historical process, the literature of many societies has been deemed as parochial or “local” by comparison. This has been to our own detriment as we have overlooked many important works of literature that have emerged in other non-Western societies.

The Importance of Libraries

This is why the current exhibition held at the National Library of Singapore is so important. Entitled “Tales of the Malay World: Manuscripts and Early Books”, the library’s spectacular exhibition has brought together a large number of beautifully illuminated manuscripts from its own collection as well as the collections of major libraries of Europe. The value of this rare exhibition is that it reminds us that Southeast Asia was a major centre of learning and writing, and that the region was home to its own community of intellectuals, philosophers, historians and writers of note.

The works on display at the National Library show that Southeast Asian writers busied themselves with the task of writing about many different topics and themes. Though an overwhelming majority of the works written in the past were related to religion and scriptural studies, the exhibition also includes important works that point to the wide range of concerns that drove Southeast Asian writers in former times.

The legal compendium Undang-Undang Melaka (Laws of Malacca) – codified during the reign of Sultan Muhammad Shah of Melaka (1424–1444) – on the other hand was an important work on law, and written in Southeast Asia at a time when Southeast Asian states had yet to come under colonial rule. Put together, this impressive collection of works – both handwritten and later printed – points to an active writing and reading culture that thrived in our region long before the coming of Google or Wikipedia.

The question, however, remains: If Southeast Asia (like South Asia and East Asia) was a region where writing and intellectual activity was commonplace, why is it that Southeast Asian literature is seen as “unworthy” of global recognition? Until today, our region’s novelists are sometimes referred to as “Asian writers”, while the same might not be said of an American or British novelist. Where lies the bias that continues to frame Southeast Asian writing as marginal?

In this respect, two works that are now on display at the exhibition are particularly important: the first is Taj al-Salatin (The Crown of Kings) by Bukhari al-Johori, which was written in 1603. Bukhari’s work was, and remains, one of the most important political texts to have emerged in the 17th century, and deals with a range of issues from the authority of government to the duties and responsibilities of rulers. It lays out, in clear terms, the political-social contract between subjects and rulers and constantly reminds the reader of the need for a system of checks and balances so that political authority is not compromised. 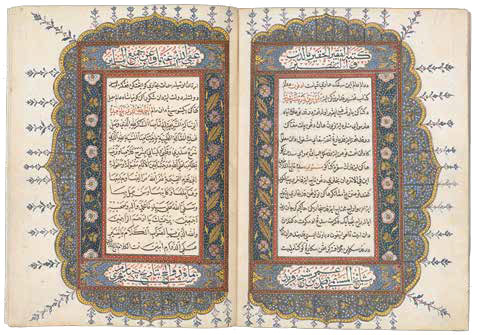 This rare and highly decorated manuscript titled Taj al-Salatin (The Crown of Kings) is considered one of the most beautiful by experts. The opening and closing pages are elaborately adorned with blue, red, yellow and gold patterns. The decorative style of the closing pages as seen here is reminiscent of Indo-Persian and Ottoman manuscripts. Believed to have been composed in Aceh in 1603 by Bukhari al-Johori (the “jewel merchant”), the work is one of the most important texts about political theory and governance from the 17th century. Collection of The British Library, Or. MS. 13295.

Again and again, Bukhari reminds the ruler that his authority is based on the support he receives from his subjects, and that support cannot be coerced or taken for granted. In so many ways, this was a modern work of political theory and governance, and a noteworthy observation to be made here is the fact that Taj al-Salatin was written in 1603, decades before Thomas Hobbes’ works De Cive (1642) and Leviathan (1651).

Yet, while the works of English political theorists like Hobbes and John Locke have been elevated to the status of “global” political theory, Bukhari’s Taj al-Salatin remains confined to the domain of Asian literature and area studies. The same can be said of the political writings of countless other scholars from China to India to Africa, whose works have likewise been slotted into the marginal categories of “East Asian studies”, “South Asian studies” or “African studies”.

Another important work on display is a handsome copy of the famous Hikayat Hang Tuah. The tale of the hero Hang Tuah is known to many by now, thanks in part to the manner in which it has been rendered in popular films and even comics. But few realise that the text is much more complex than it first appears, and this becomes evident when we read it to the very end – following Hang Tuah’s journey as he becomes a diplomat-emissary who travels beyond Southeast Asia and ventures to South Asia, East Asia and beyond. It is in the latter half of Hikayat Hang Tuah that we come to see that the work is not only a heroic epic, but also an account of travel and diplomacy, giving us an idea of how Southeast Asians related to the wider world in our pre-colonial past.

Perhaps the most outstanding aspect of Hang Tuah is how he seeks difference in his travels and longs to encounter the new, but at the same time reconciles all forms of difference according to the register of the familiar. Throughout his journeys across Greater Asia, Hang Tuah seeks to understand the communities and cultures he encounters with an open mind, guided by the spirit of a shared humanity. Not once does he frame the Other in negative terms, choosing instead to try to understand other societies and cultures as human constructs made by fellow human beings. There is a great universal spirit that permeates this work, and it tells us a lot about how Southeast Asians were capable of meeting the wider world without fear.

Southeast Asia as a Globalised World

Living as we do in the globalised world today, we can see how different societies have coped with the new realities of increased movement and contact. What is sometimes forgotten is the fact that Southeast Asia has always been part of a globalised Asia, and Southeast Asian writers and thinkers have always regarded themselves as part of a wider global current of ideas and beliefs.

This becomes evident in the exhibition where we see the result of several centuries of cross-border contact and the cross-fertilisation of ideas, as Southeast Asian writers wrote about the concerns that were prevalent across the whole of Asia then. The fertile imagination of Southeast Asian writers of the past suggests that they were confident of their own beliefs and world view, and saw themselves as part of a broader global intellectual space that extended from Turkey to China.

Perhaps the most significant takeaway from this remarkable exhibition is that the outdated Orientalist view that Southeast Asians were passive witnesses to global history can be debunked once and for all. This vast collection of Southeast Asian works – primarily from the Malay Archipelago – brought together in this exhibition shows how the people of this region produced writings on religion, philosophy, politics, law, history and geography, and were not merely interested in fairy tales or fables.

It is high time that Southeast Asians have a sense of their own place in global history, and see themselves as part of a globalised world rather than as inhabitants of some remote corner of the globe that time forgot. And it should remind us of the fact that globalisation has never been a new phenomenon to those of us who live in Southeast Asia; these manuscripts serve to remind us of our global past, as well as our status as world citizens.

“Tales of the Malay World: Manuscripts and Early Books” takes place on Level 10 of the National Library Building until 25 February 2018. This article was first published in The Straits Times on 5 September 2017. © Farish A. Noor and Singapore Press Holdings. Reprinted with permission.

Farish A. Noor is Associate Professor at the S.Rajaratnam School of International Studies, Nanyang Technological University. He is a regular contributor to BiblioAsia.
Back to Issue