Keong Saik Road: The Other Side of the Red-Light District

Charmaine Leung relives the sights and sounds of Keong Saik Road – where she lived in the 1970s and 80s – and says it has more to offer than its former notoriety. 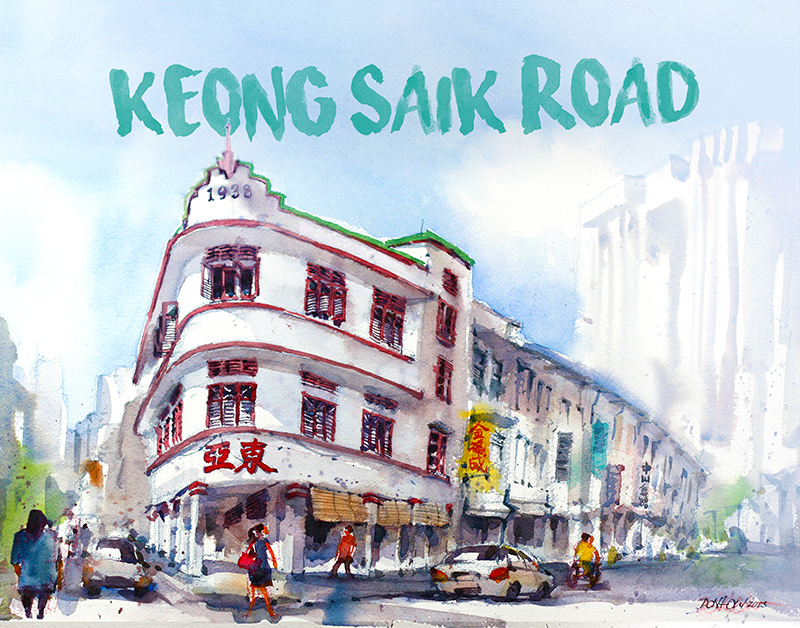 If I were to think of Keong Saik as a person, it would be a woman. In particular, I see an elderly lady who is hardworking, loyal and reliable, tirelessly working to provide for her family and her employers.

This image, long entrenched in my mind, is an impression very much influenced by Auyong Foon – someone I called “grandaunt”. Auyong Foon was not a relative but a dear friend of my grandmother’s, and I was fortunate to have spent my formative years in her company – an experience I treasure immensely. She was my favourite grandaunt and I fondly addressed her as Foon Yee Por (“Yee Por” is a Cantonese term used to address female contemporaries of one’s grandmother).

Both Foon Yee Por and my grandmother were majie (妈姐) – a term referring to Chinese women who journeyed to Southeast Asia in search of a better life in the 1930s, working mainly as domestic servants in the homes of wealthy families.1

These Cantonese women, from the Pearl River Delta in Guangdong province, left behind their elderly parents and younger siblings to find work in Nanyang2 and Hong Kong. They formed a group of early Chinese immigrants who helped lay the foundations for Chinese culture and community in Singapore.

In Singapore, the majie congregated mainly in Chinatown. Their lives, employment and recreational activities extended to the outskirts of Chinatown to include Keong Saik Road, Bukit Pasoh Road, Tanjong Pagar Road and Cantonment Road, as well as other parts of Singapore.

Many of these unmarried women were in their 20s. Once they arrived in Singapore, they banded together, forming a tight-knit group. They established clan associations, known as kongsi (公司), and pooled their resources to rent accommodations called kongsi fong (公司房). The women also took care of each other and depended on one another for moral, psychological and financial support. Those who arrived earlier would write letters to inform their friends and families back home about work opportunities in Singapore.

Many of these hardworking and independent majie took vows of celibacy, pledging to remain unmarried for life. This ceremonial vow included a ritual known as sor hei in Cantonese (梳起; literally “comb up”) that involved styling their hair into a neat bun at the back of their head. For the majie, this hairstyle became an expression of their social maturity and celibate status, in contrast to girly styles such as plaiting their hair into two braids. Once the majie reached her 40s, it was common to adopt young daughters so that she would have someone to depend on in her old age. 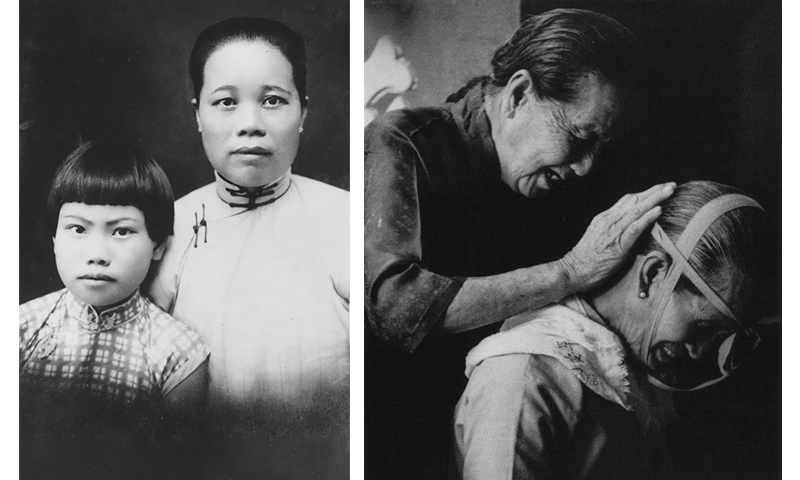 (Left) A majie. and her adopted daughter. Majie were Cantonese women from the Pearl River Delta region in China's Guangdong province, who journeyed to Southeast Asia in the 1930s to work mainly as domestic servants for wealthy families. Courtesy of Charmaine Leung.

{Right) Majie took vows of celibacy. Image shows a ritual called sor hei (梳起; literally “comb up”) in which the women styled their hair into a neat bun at the back of their head. Photo by Yip Cheong Fun. Courtesy of Andrew Yip.

My Foon Yee Por has since passed away and many of the majie known to my family are no longer around. Singapore probably has a handful of surviving majie left. Before long, they too will pass on. But they have certainly left behind many stories of old Keong Saik Road, and Foon Yee Por and her community form an indelible part of Singapore’s history and heritage today.

Keong Saik Road did not start off as a red-light district, although it was next to the notorious Smith Street, which was lined with brothels servicing workers and labourers.

Its beginnings were more wholesome. In the 1930s, many clan associations and wholesalers set up offices on Keong Saik Road. Because it was a place for business meetings and gatherings, there was a strong demand for post-meeting entertainment. This led to the birth of clan associations-cum-entertainment houses in the Keong Saik area which, in turn, saw the emergence of a culture where wealthy men indulged in food, alcohol, gambling, opium-smoking and entertainment by women.

Located on Keong Saik Road and Bukit Pasoh Road, the entertainment houses were premium set-ups aimed at the well-heeled. At these establishments, female singers and musicians, such as the pipa tsai (Cantonese for “little pipa player”),3 entertained men with song and music. Over time, this entertainment provided by such women led to the transformation of Keong Saik Road into a red-light district, complete with opium dens.

It was in the offices, clan associations and entertainment houses on Keong Saik Road that many majie found work as domestic helpers and cleaners. These early Chinese migrants brought with them many cultural and religious practices that are still being observed today such as “Beat the little people”.

Nestled among the shophouses is Zhun Ti Gong (or Cundhi Gong) – a Chinese temple dedicated to Guanyin, the Goddess of Mercy – located at 13 Keong Saik Road. An ornate structure with a roof featuring decorative beams and adorned with intricate motifs of dragons, peacocks, phoenixes and flowers, the temple has witnessed many sor hei ceremonies held by the majie.

Today, this temple is especially popular with former residents of Chinatown. While many of these elderly devotees have since moved to newer housing estates with their children, many still return with younger family members to offer their prayers on the first and 15th days of the lunar month. 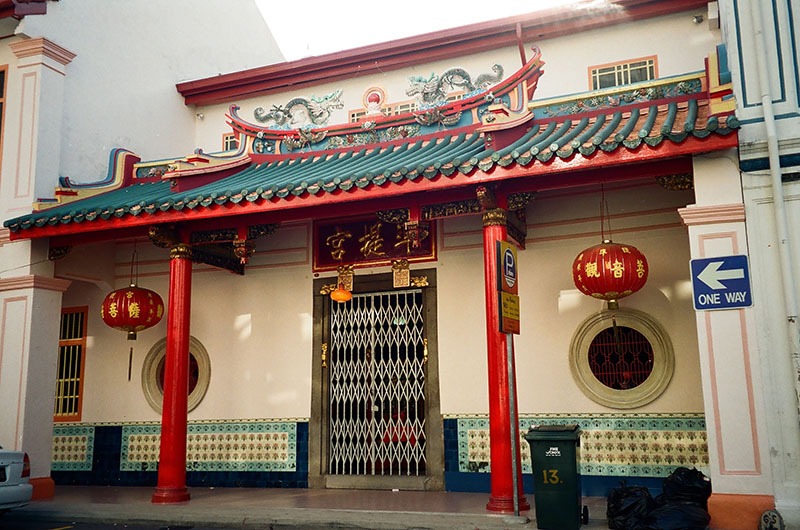 The Zhun Ti Gong Temple (or Cundhi Gong) at 13 Keong Saik Road, 2000. Built in 1928, the temple played an important role in the lives of majie. Many of the sor hei ceremonies by the majie took place at the temple. Courtesy of Charmaine Leung.

Apart from the predominantly Cantonese-speaking Chinese community who lived and worked on Keong Saik Road, a small community of Indians also called it their home.

Keong Saik Road was home to a shophouse occupied by Indian coolies. Many were young bachelors working in Singapore, but some were older men who had left their families in India in search of greener pastures in Singapore. 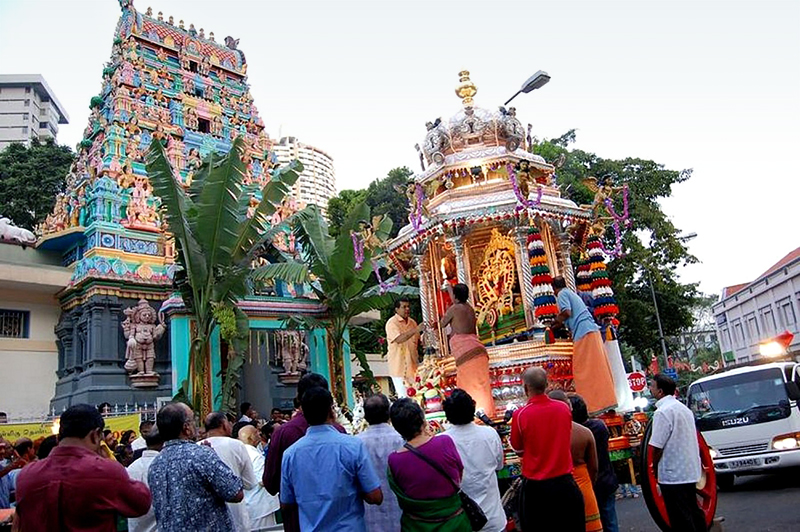 I remember an Indian man in his 30s living there who operated a “mama shop”4 just across the street. He spoke fluent Cantonese and always sold candy to kids at a discount, even giving them extra treats. He allowed children to hang around his shop, letting them admire the wide array of colourful merchandise that included toy swords, badminton rackets and magazines.

In the 1970s and 1980s, the Keong Saik area also had businesses that co-existed with the brothels. Next to the Hindu temple was a seamstress whom the ladies of Keong Saik patronised to have their clothes tailored, while a nearby dentist looked after the dental health of residents.

Sim San Loke Hup Athletic Association was at No. 65, very close to the Indian dormitory. This was a place where young Chinese men learned and practised martial arts, and sometimes performed lion and dragon dances for the Keong Saik community during the Lunar New Year and other special occasions. The association is currently located at 85-B.

Besides the “mama shop”, there were two other provision shops on Keong Saik Road. One was situated across the road from the Indian dormitory, and the other was at the other end of the street, closer to Neil Road. There were no lack of options for dry provisions at Keong Saik, and residents only went to the wet markets of Chinatown to buy fresh produce.

Located near Keong Saik Road was a factory called Yip Choy Sun (叶彩新), a family-run business that produced a variety of handmade paper boxes. It operated on the ground floor of 6 Jiak Chuan Road.6 The factory was busiest during the Mid-Autumn Festival when it produced thousands of boxes for Tai Chong Kok (大中国), a traditional bakery in Chinatown that was popular for its mooncakes. Yip Choy Sun operated at full capacity to meet the orders for mooncake boxes and because it was not uncommon to receive last-minute orders, the entire family would pitch in to get the orders out. The family moved out of the Keong Saik area when the patriarch passed away in October 1997.

A well-loved icon of Keong Saik Road, then and now, is the famous Tong Ah Eating House, formerly located in the distinctive red-and-white three-storey building situated on the triangular plot of land at the junction of Keong Saik and Teck Lim roads. The coffee shop was opened in 1939, the same year that the building was completed. Favoured by the residents of Keong Saik, Tong Ah was packed every morning. One of the most sought-after breakfast items was buttered toast topped with kaya.7

In 2013, the coffee shop moved across the street to number 35. The Chinese characters 東亞 (Tong Ah) remain inscribed on the facade of the former location. The kaya toast set – comprising buttered toast slathered with homemade kaya and paired with two soft-boiled eggs drizzled with soya sauce and a dash of pepper, all accompanied by hot coffee or tea – remains popular.

To the uninitiated, Keong Saik Road may be just another street in Singapore. But for those who are interested in the history of our country, Keong Saik is part of Singapore’s heritage, offering a glimpse into the lives of early Chinese immigrants. The eclectic mix of communities and businesses at the Keong Saik Road of yesteryear has given the place a unique identity. 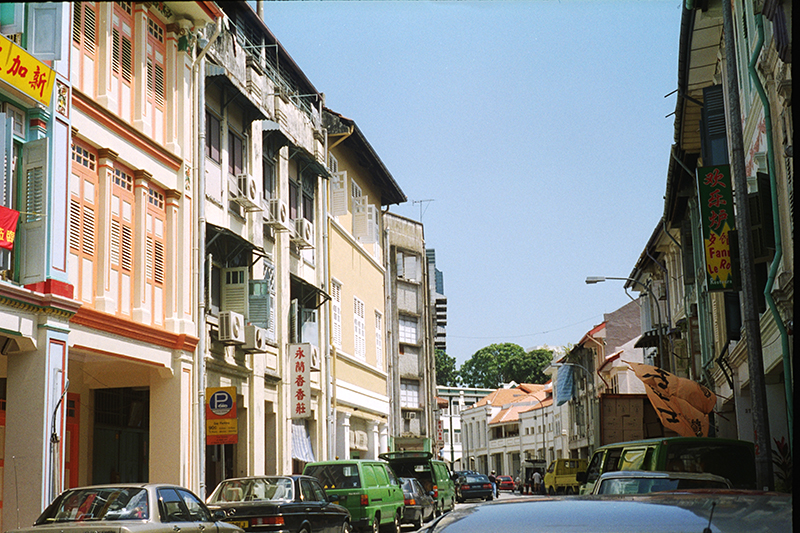 Keong Saik Road is now a trendy neighbourhood offering contemporary wine and dine options in restored shophouses, attracting many tourists who are often seen on the street posing for photographs. (Keong Saik’s international profile was raised after it was voted one of the top four travel sights in Asia by Lonely Planet in 2017). For me, Keong Saik Road is the first home I knew.

As I stroll along the Keong Saik area today, what I encounter now is very different from what I remember. On a recent visit, I walked past fancy restaurants and ultra-modern boutique hotels stylishly designed to attract a new generation of visitors. The community there is no longer the one I had been familiar with.

Although newness brings excitement, if we are not deliberate in preserving the spirit of our heritage beyond its physical structures, we may one day lose the intangible beauty of our past and heritage completely. I am grateful for the privilege to have lived in an iconic part of Singapore’s past and to have experienced the old Keong Saik Road and its community. As one of Singapore’s daughters, I can only hope that I have done my part in helping to preserve a little of Singapore’s heritage in my sharing about a street that was once my home.

Charmaine Leung is the author of 17A Keong Saik Road, which was shortlisted for the Singapore Literature Prize in 2018. When she is not writing, Charmaine is a curious traveller who enjoys roaming the globe and seeking out off-the-beaten tracks to capture landscapes and communities through photography.
Back to Issue