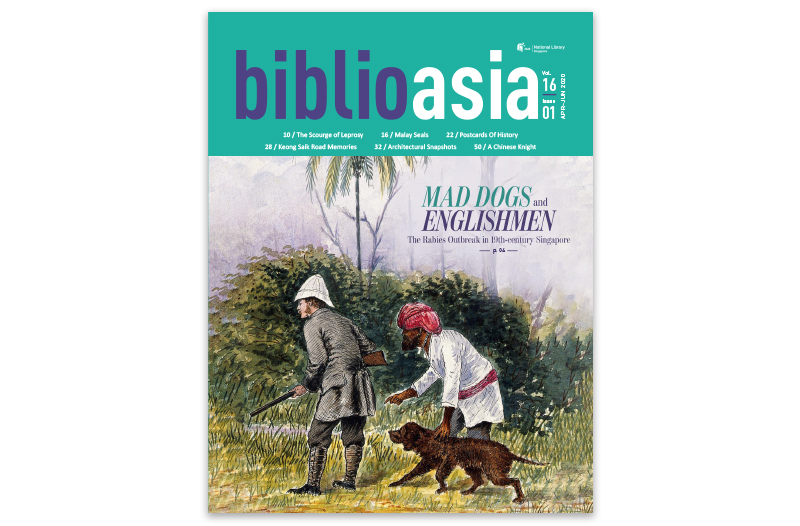 From mad dogs and the majies of Keong Saik Road to intricate Malay seals and the life and work of Marjorie Doggett, there’s something for everyone in this latest issue of BiblioAsia.

Mad Dogs and Englishmen: Rabies in 19th-century Singapore
Timothy P. Barnard sniffs out the details of a rabies scare that swept through the island in the 1880s and 90s.(PDF)

Leprosy: A Story of Suffering, but Also of Hope
People who suffered from leprosy used to be shunned and forced to live in isolation. Danielle Lim recounts the history of leprosy treatment here.(PDF)

History Through Postcards
Stephanie Pee reveals what the postcards in the Lim Shao Bin collection have to say about the pre-war Japanese community here. (PDF)

Keong Saik Road: The Other Side of the Red-Light District
Charmaine Leung says there is more to the place than its reputation suggests.(PDF)

The Thespians of RAF Seletar
Suriati Sani goes backstage to bring us the story of this high-flying amateur theatre company.(PDF)

The King’s Chinese: The Life of Sir Song Ong Siang
Kevin Y.L. Tan pens a portrait of the first person in Malaya to be knighted and the author of One Hundred Years’ History of the Chinese in Singapore.(PDF)

Milestones to the Metric System
Shereen Tay traces how Singapore transitioned to the metric system in 10 short years.(PDF)

The News Gallery: Beyond Headlines
Mazelan Anuar and Faridah Ibrahim give us the inside scoop on our latest exhibition.(PDF)