Leprosy: A Story of Suffering,
But Also of Hope

People struck with leprosy were shunned and forced to live in isolation at the Trafalgar Home in Yio Chu Kang. Danielle Lim tracks the history of this disfiguring disease in Singapore. 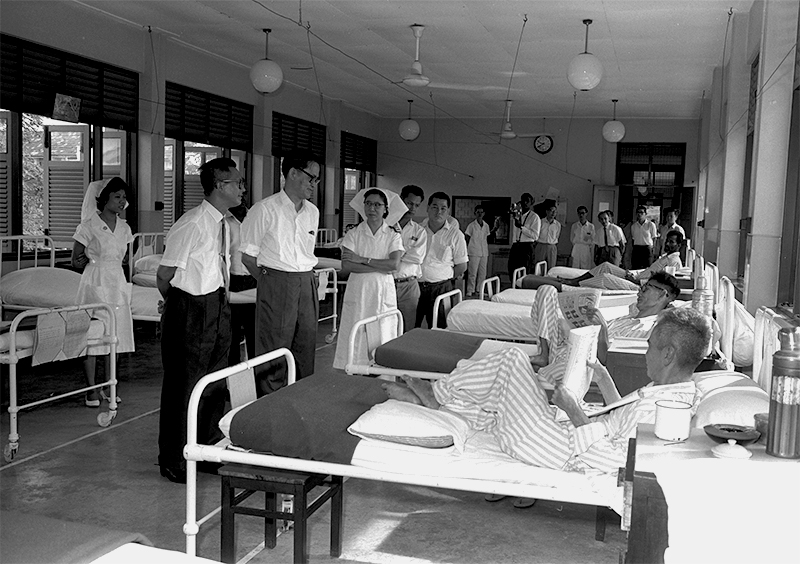 Minister for Health Yong Nyuk Lin (second from left) visiting Trafalgar Home and interacting with residents, 1964. Ministry of Information and the Arts Collection, courtesy of National Archives of Singapore.

Leprosy is a disease that has perhaps left the longest trail of illness and suffering in human history. The disease is mentioned in an ancient Chinese medical treatise, Neijing (内经; Yellow Emperor’s Classic of Internal Medicine), as early as 250 BCE.1 Leprosy is the result of an infection caused by the bacteria Mycobacterium leprae. It is a chronic, infectious, disfiguring disease that has historically caused its sufferers to be shunned by society. Known and feared for thousands of years, it was only in the late 1940s that a cure for the disease became available.

According to estimates by the World Health Organization, there were around 10 to 12 million leprosy cases globally between the mid-1960s and the mid-1980s.2 In 2010, the number of new cases dropped to 228,474.3 What is not known, however, is the cumulative total number of people who have suffered leprosy’s chronic course of incurable disfigurement and social exile over the centuries.

In Singapore, a total of 8,500 leprosy patients were registered between 1951 and 1995.4 Here, as in other parts of the world, leprosy carries a social stigma. Those who contracted the disease were ostracised by family and friends and banished from society. They lived as outcasts, people whom the community feared. It was only after a cure was discovered that sufferers could return to society, though not all of them chose to.

The segregation of leprosy sufferers in colonies and asylums was a common worldwide practice. In July 1897, the Lepers’ Ordinance was passed in the Straits Settlements empowering the authorities to detain leprosy sufferers indefinitely in asylums in order to prevent the spread of the disease.5 Prior to this, there was no law requiring compulsory segregation.

In the early 1900s, male lepers in Singapore were housed in rudimentary leprosariums in the city fringes and beyond, while females were warded in Kandang Kerbau Hospital. It was only in 1918 that a dedicated camp for male patients was established on McNair Road. In 1926, a small centre with four wards for female patients was constructed on the Trafalgar rubber estate off Yio Chu Kang Road. Four years later, a new male camp was built adjacent to the centre for females, and both sites became known collectively as the Singapore Leper Asylum.

Up to the 1920s, inmates of the asylum had to wear uniforms bearing the letter “L”. In the 1930s, the asylum’s gates were manned by security guards armed with rifles to prevent residents from escaping and infecting the rest of the population. The asylum was renamed Trafalgar Home in 1950.6

In mid-20th century Singapore, there were three diseases known as the “three brothers”. Mental illness was considered the mildest and hence the little brother while tuberculosis was known as the second brother. The most feared was leprosy, known as the eldest brother.

So intense was the fear of leprosy that it was common for public buses to drive past the bus stop nearest to Trafalgar Home without stopping to pick up those waiting there. Nurses working at the home had to walk to the next bus stop to get a ride home.

It was no coincidence that Trafalgar Home was situated in a remote area in Yio Chu Kang, beside the old Woodbridge Hospital for patients with mental illnesses. With its high walls and barbed wire, the home could easily be mistaken for a prison. 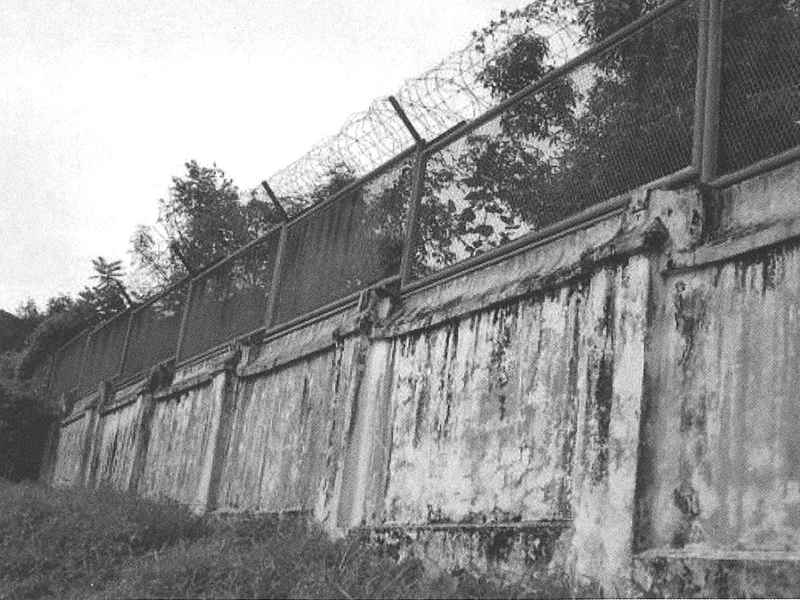 Trafalgar Home in Yio Chu Kang – which was shuttered in 1993 – was surrounded by high walls and barbed wire to prevent residents from escaping. Courtesy of Loh Kah Seng.

Trafalgar Home was based on the concept of an “open village” with room for expansion. More than 60 semi-detached cottages, which could accommodate two adults each, were built on one end of the compound on the same side as the female infirmary. Each cottage had a kitchen, two cupboards, two bedside lockers and two beds. At one point, Trafalgar’s grounds occupied some 125 acres.7 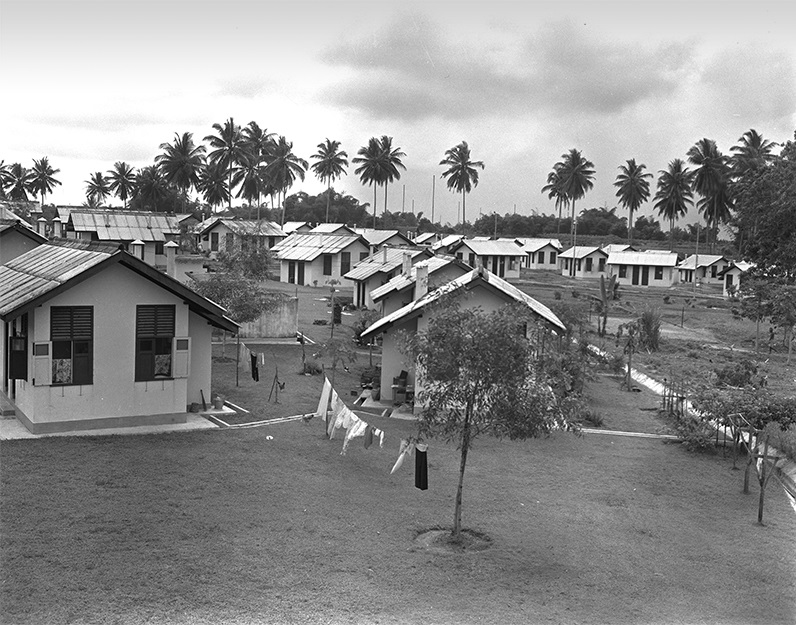 The semi-detached cottages on the grounds of Trafalgar Home, 1952. Housing two adults, each unit was equipped with a kitchen, two cupboards, two bedside lockers and two beds. Ministry of Information and the Arts Collection, courtesy of National Archives of Singapore.

Before World War II, nursing duties were performed mainly by the residents themselves as professional medical and nursing staff were reluctant to work in leprosariums. From the end of the Japanese Occupation until the mid-1960s, the Roman Catholic nuns of the Franciscan Missionaries of the Divine Motherhood (FMDM) order carried out most of the nursing duties at Trafalgar Home.

When the nuns left, they were replaced by local female nurses, many of whom approached their duties with dread and trepidation. One of the nurses admitted that when she was offered food prepared by the residents, she was so scared that she did not dare eat it. Another said she would immediately soak her clothes in Dettol when she returned home from work.8 As with other leper asylums throughout the world, the residents were mindful of such fears; they kept a respectful distance from healthy people and refrained from physical contact.

The home’s able-bodied residents worked and contributed to the daily running of the home as patient-workers. Some trained as nursing aides or hospital attendants, assisting in the medical care of fellow patients, while others became teaching aides and helped out at the school within the grounds. Others handled the cooking chores in the kitchen, did the laundry, carried out clerical duties in the office and wove baskets in the occupational therapy room. Such tasks made the residents feel useful and also enabled them to earn a small allowance. 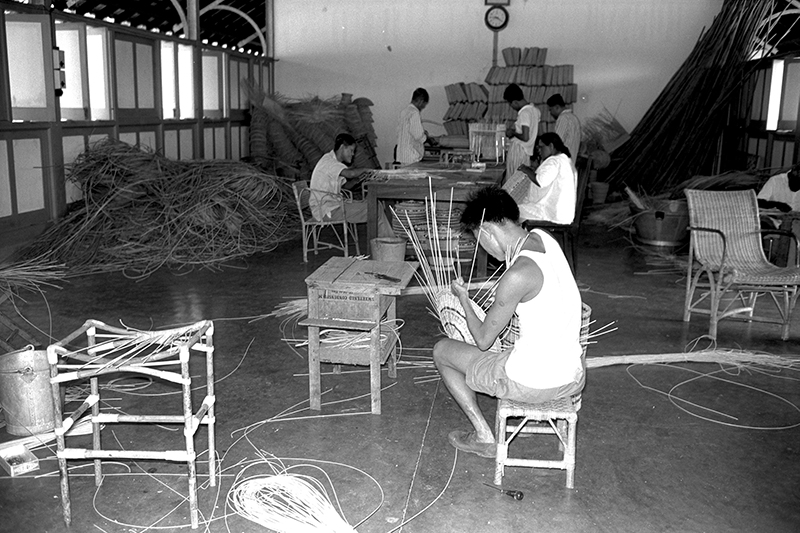 Residents of Trafalgar Home weaving baskets and other items in the occupational therapy room, 1963. Ministry of Information and the Arts Collection, courtesy of National Archives of Singapore.

A small farm on the grounds allowed residents to grow vegetables to supplement their rations. Social gatherings such as club nights on Fridays were organised, during which treats of orange juice were eagerly anticipated. At these activities, friendships were formed and occasionally love blossomed. At times, fights broke out, especially when gambling and alcohol consumption had taken place. For the children of Trafalgar Home, the highlight was the annual Christmas party. Residents were also involved in sports and participated in extra-curricular groups such as Boy Scouts and Girl Guides.

Because Mycobacterium leprae attacks the nerves and muscles, many patients suffered intense pain as the disease progressed. Steroids such as prednisolone relieved the pain, but these were prescribed very sparingly by doctors who were only too aware of the dangers of steroid addiction. Some patients would obtain the medication and sell it to other patients who were in great pain and desperate for relief.

Of the 1,358 cases of leprosy registered in Singapore between 1962 and 1967, 150 were under 15 years of age.16 The children admitted to Trafalgar Home lived in dormitories and studied at Lorong Buangkok School, which had been set up in 1947 to cater to children with leprosy.17

At the school, which was renamed Lorong Buangkok Government English School in 1958, lessons were taught by the Catholic FMDM nuns, trained teachers as well as educated residents who became teaching aides. Many of the teachers were themselves patients of the home, educators who had qualified as teachers prior to contracting the disease.

School was a major part of life for most of the children in Trafalgar Home. They would wake up at seven in the morning, put on the school’s blue and white uniform, and walk the half-kilometre from their dormitories to the school. The school catered to children from Primary One until Secondary Four. 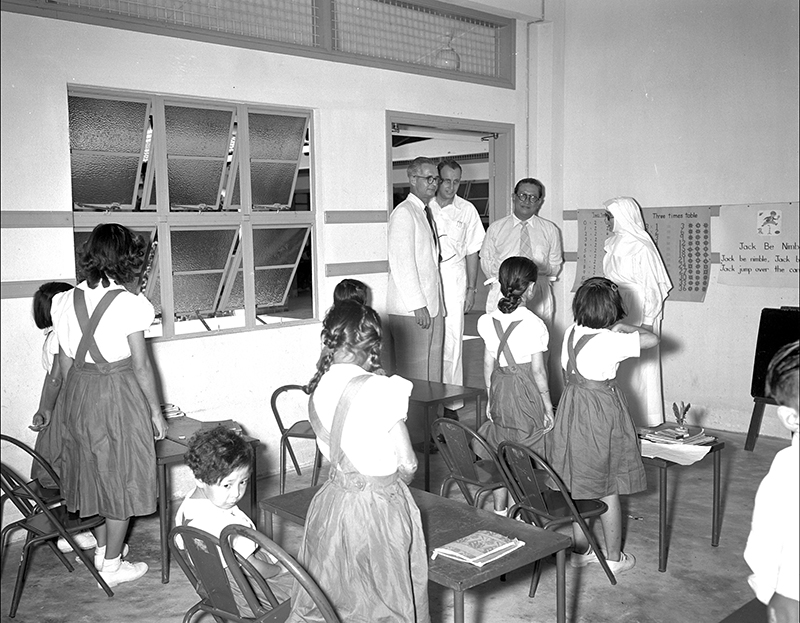 Minister for Health A.J. Braga (third from left) visiting Lorong Buangkok School for children with leprosy in 1955. Ministry of Information and the Arts Collection, courtesy of National Archives of Singapore.

The children of Trafalgar Home came from varied backgrounds: some were from poor families with little prior education while others had previously attended established schools with high academic standards. The nuns and teachers did what they could to provide education for this diverse group of children. Some students even managed to take their Senior Cambridge Certificate examination at the school.

In the 1930s, researchers discovered sulfa drugs – a class of antibiotics – that led to the development of dapsone, which kills the bacteria that causes leprosy. Doctors eventually developed a multi-drug therapy consisting of dapsone and two other drugs, rifampicin and clofazimine, that became the standard treatment for leprosy. At last, there was a cure for the disease. In Singapore, treatment by dapsone began in the 1950s.

The Leprosy Act, which mandated the segregation of infectious cases of leprosy, was repealed in 1976 and replaced by the Infectious Diseases Act. With the repeal, the remaining institutions with compulsory segregation were progressively shut down. Trafalgar Home was eventually closed in 1993.22 Today, leprosy is managed by the National Skin Centre, while other infectious diseases come under the purview of the National Centre for Infectious Diseases.

With the closure of Trafalgar Home, some residents decided to move to the Singapore Leprosy Relief Association Home in Buangkok. Although cured, they had lived in Trafalgar Home for so many years that they no longer had a home to return to. Some were left with deformed limbs and did not want to go back to a society that might not accept them as they were.

The rest, upon recovery, attempted to return to a normal life. But the process of social reintegration was far from easy. Some had lost contact with their loved ones while others were turned away by their families. Some women also discovered that their husbands had left them and remarried. Because of the stigma, many lied when neighbours and friends asked about their long absence. Former patients thus felt a deep ambivalence when they were discharged: although now free to integrate back into society, they did not know if they would be welcomed.

While there were difficulties, many of those who were cured managed to rejoin mainstream society. They went on to carve out successful careers as teachers, nurses, clerks and in the army. Many also contributed economically and socially to a newly independent Singapore in its formative years.

Today, the National Skin Centre in Singapore treats about 10 to 15 new leprosy patients each year. Although a handful are Singaporeans, the majority are migrant workers from countries like Indonesia, the Philippines, India, Bangladesh and Myanmar.23

The illness remains a problem in some countries. In India, for example, alarm bells rang when the Central Leprosy Division of the health ministry reported 135,485 new leprosy cases in 2017.24 One of the reasons for the resurgence of the disease could be the reluctance to seek treatment due to fear.

With multi-drug therapy providing an effective cure, leprosy is no longer the dreaded disease it once was. Yet while treatment is available, the deep-seated fear and social stigma remain as strong as ever.

Danielle Lim is an award-winning Singaporean author whose memoir about mental illness, The Sound of SCH, won the Singapore Literature Prize for non-fiction in 2016. Her latest book, Trafalgar Sunrise, was a finalist at the 2019 Singapore Book Awards. She is a lecturer at Nanyang and Republic polytechnics.
Back to Issue