The News Gallery: Beyond Headlines

There is more to news than meets the eye. Mazelan Anuar and Faridah Ibrahim give us the scoop on the National Library’s latest exhibition. 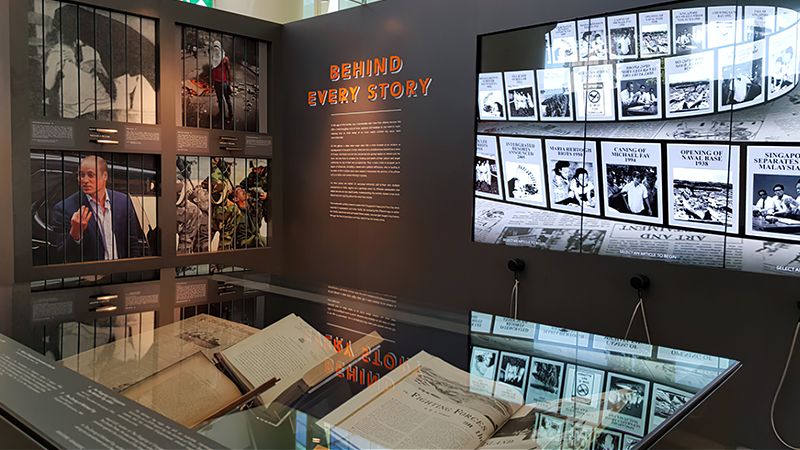 The “Behind Every Story” interactive zone showcases significant events from Singapore’s history to illustrate how news reporting can create different versions of reality.

While rumours, falsehoods and hoaxes have been around since time immemorial, the advent of the internet and the proliferation of social media platforms have accelerated the speed at which such news is disseminated today.1 The need to sift fact from fiction is all the more important given the volume of information (and disinformation) people are presented with from both established and new sources of media.

Old newspapers are treasure troves of information and are a rich resource for academics, researchers and anyone with an interest in history. “Early Editions”, the first zone that visitors to The News Gallery will encounter, examines the origins of newspaper publishing in Singapore and the early players in the scene.

The printed newspaper as we know it today began proliferating in the 17th century with the rise of the modern printing press. It took another two centuries before Singapore’s first English-language newspaper hit the stands when the Singapore Chronicle and Commercial Register rolled off the press on 1 January 1824. Francis James Bernard, the son-in-law of Singapore’s first Resident, William Farquhar, was its editor.2

In 1835, a second English newspaper called The Singapore Free Press and Mercantile Advertiser3 (see text box below) entered the scene. In response, the Singapore Chronicle halved its price and advertising rates, but to no avail. Barely two years later, the Chronicle folded; its last issue was published on 30 September 1837. Eight years later in 1845, The Straits Times4 – the newspaper that most Singaporeans are familiar with and the longest-running daily broadsheet – was launched.

This zone of the exhibition also showcases non-English-language newspapers that were published in Singapore. These vernacular newspapers addressed and promoted the issues, concerns and interests of their respective communities. In the early years, Chinese-language newspapers such as Nanyang Siang Pau and Sin Chew Jit Poh were concerned with the affairs of China,5 while Tamil Murasu was the vanguard of the social reform movement that was taking place among Indians in Singapore.6 Similarly, early Malay newspapers such as Jawi Peranakkan7 and Utusan Malayu8 championed the causes of the Malay and Muslim communities in Singapore.

The Story Behind the Story

Fake news is by no means a new phenomenon, but the internet and the new media have added to its exponential rise in volume and enabled it to spread like wildfire, wreaking havoc on a global scale. This can take a multitude of forms: from dodgy websites and mobile phone text messages circulating unfounded rumours to posts on Twitter, Instagram and Facebook containing convincing but deceptive images. There are even insidious deepfake videos capable of tricking even news-savvy viewers into believing what they see. The factors that drive fake news are equally varied – from political propaganda, fraud and financial gain, hatred and malice to simply well-meaning but mindless and ignorant sharing of falsehoods.

One highlight of the exhibition is the “Fact or Fake?” zone which features examples of fake news drawn from real life, such as the supposed collapse of Punggol Waterway Terraces in Singapore, lynch mobs in India who were spurred to action by rumours of child abductions and organ harvesting, anti-immigrant disinformation during the Brexit referendum in the United Kingdom, and investment scams featuring prominent Singaporeans. The content is presented in a light-hearted manner through an interactive quiz to engage younger audiences, especially students.

While most credible journalists aim to report truthfully, the reality is that no news article – whether from the traditional or non-traditional media – is completely free from bias. The political affiliations of newspaper owners and the personal opinions of journalists and news editors, among other factors, come into play. It is common knowledge that in the end, readers will believe what they want to believe, or search for news that best reinforces their views and perceptions of the external world.

Look out for the interactive zone called “Behind Every Story” which highlights significant events from Singapore’s history to illustrate how news reporting can create different versions of reality for different readers. Various news articles, photographs and video footage have been combined into a multimedia showcase for visitors to learn about these events and to see how they were reported at the time.

The events featured include the fall of Singapore in February 1942,17 the Maria Hertogh riots in 195018 and Singapore’s separation from Malaysia19 in 1965. More recent events include the Michael Fay saga in 199420 and the decision in 2005 to develop two integrated resorts in Singapore.21

At the height of the Michael Fay incident in 1994, The Straits Times deliberately published the opinions of US columnists alongside its own to rebut their arguments. The Straits Times, 8 April 1994. Retrieved from NewspaperSG.

On a Lighter Note

Newspapers are not merely about serious news – they also contain advertisements, entertainment stories, food reviews, photographs, recipes, puzzles, comics and even “Aunt Agony” columns. The zone “Extra! Extra!” showcases other interesting aspects of newspapers. The exhibits will be regularly updated to highlight different elements found in newspapers, with the first instalment on games and quizzes such as crossword puzzles, spot the ball and sudoku. Subsequent exhibits will look at photojournalism, cartoons and caricatures, and advertisements.

There is also a digital station featuring electronic newspaper resources available to library users. Visitors can browse and search past and current news on NewspaperSG, the National Library’s online archives of Singapore’s newspapers dating back to 1831 as well as other databases that provide access to local and international newspapers. 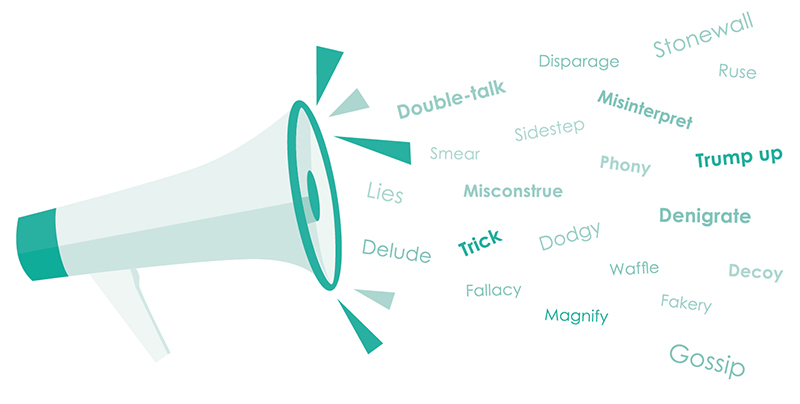 “The News Gallery: Beyond Headlines” is located at the Promenade on level 11 of the National Library Building. Opened between 10am and 9pm daily, admission to this permanent exhibition is free.

Mazelan Anuar is a Senior Librarian with the National Library, Singapore. His research interests are in early Malay publishing and digital librarianship. He is part of the team that manages the Malay-language collection and NewspaperSG.

Faridah Ibrahim is Head of Reader Services at the National Library, Singapore, where she promotes the use of credible sources for research. Her research interests include information-seeking behaviours and pedagogical approaches.
Back to Issue