The Thespians of RAF Seletar

The RAF Seletar Theatre Club was a highly regarded amateur drama group in Singapore for more than 20 years. Suriati Sani provides a snapshot of the club’s history. 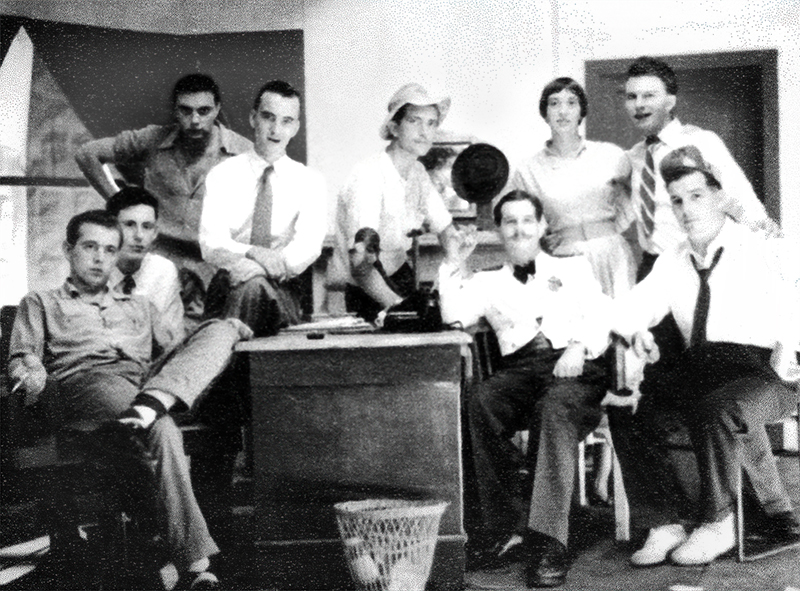 Seletar Airport and the land around it is now a part of the Seletar Aerospace Park, an industrial hub focused on aerospace activities. Before this, it was called Seletar Airbase and was used by the Republic of Singapore Air Force (RSAF). The RSAF, in turn, inherited the airbase from the British. Between 1928 and 1971, it was known as Royal Air Force (RAF) Seletar – Britain’s largest airbase in the Far East.

RAF Seletar airbase was a self-contained town with homes, shops and recreational facilities. On their day off, the people who lived and worked in the airbase would hang out together. Some of them joined clubs based around a common interest like cycling, rowing and golf. While most of the clubs were outdoor-oriented, there was at least one club whose activities were decidedly indoors – the RAF Seletar Theatre Club.

Set up in 1949, the club ran for two decades and staged over 100 productions until the curtains descended for the final time in 1970. The club, which saw a fire devastating its in-house theatre only a few years after its construction, successfully nurtured talented writers and actors despite its short but eventful history, and went on to take part in the first drama festival held in Singapore.1

The RAF Seletar Theatre Club was set up on 22 August 1949 to provide RAF personnel with live entertainment. Club members put up plays, revues and pantomimes on-site or as part of a touring company to other airbases and military sites in Singapore. The club also arranged for theatre groups from visiting units or services to perform in Seletar airbase.2

Membership to the theatre club was opened to all service personnel and their family members stationed at Seletar. The monthly membership fee was $2 for male personnel, $1 for servicewomen and $2.50 for their spouses. On average, the club staged a new play every two months while play-reading sessions were held weekly. Although it was billed as a “working” club, the theatre committee also organised regular social events, dances and outings to various theatres in Singapore for its members.3

In the beginning, the club faced typical teething issues such as the lack of funds, resources and facilities. One of the main challenges was the transitory nature of servicemen stationed at the airbase. “The main difficulty which Service amateur groups have to face is that of the constant movement of their members,” noted the programme booklet for the 1955 production of Lover’s Leap. “Fortunately, Seletar Theatre Club has never suffered seriously enough in this direction to become inactive, but they have always done their utmost to encourage actors, or would be actors, carpenters, painters, dress-makers and anybody interested, to come forward and join the ‘family’.” New members were always welcome, the programme noted.4

Some of these challenges were resolved when the inaugural theatre committee decided to open a clubhouse equipped with a bar, a rehearsal room and proper furnishings. “From that decision came the result that most members would spend the greater percentage of their spare time and interest whilst in Singapore, at the Theatre Club, living in almost a ‘family’ atmosphere.”5 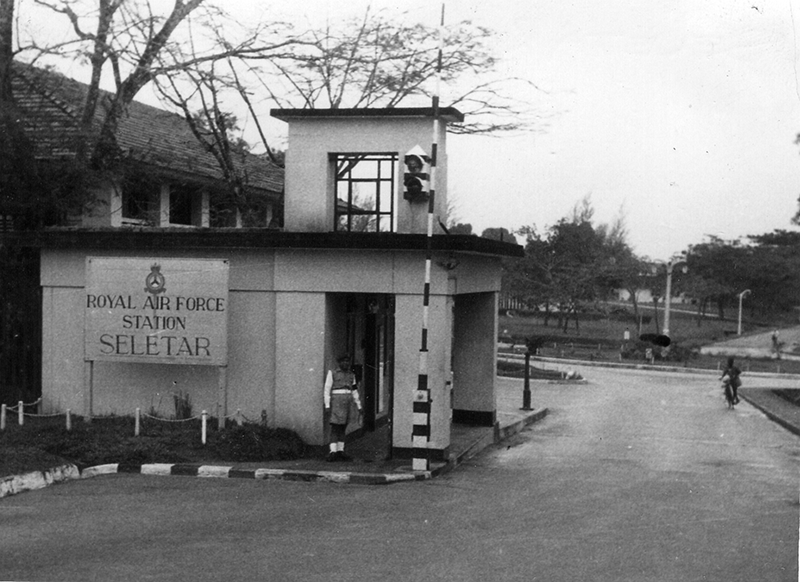 The club got its wish when its clubhouse was officially opened on 17 November 1949. It took over an old Nissen hut6 that was previously part of the Malcolm Club, a well-patronised social club at Seletar airbase.7

Rehearsals and preparations were held in the dilapidated Nissen hut while productions were staged at the Astra Cinema located beside the clubhouse. Unfortunately, the club lost this space in 1955 when a CinemaScope wide screen was installed in the cinema. The screen was so huge that it reduced the size of the stage and made it unsuitable for theatre productions.8

Forced by circumstances, the club decided to construct a purpose-built theatre. On 26 February 1957, a 150-seat theatre designed by a junior technician was opened by the station commander, Group Captain D.D. Rogers. The $20,000-facility featured the first concrete stage in Singapore, an auditorium, a lighting and sound box, a box office and, later, a club room and dressing rooms.

With income generated from ticket sales, the club carried out minor improvements and renovations to the theatre’s facilities over the years. This included the installation of raised and staggered seating, which was a rarity for an amateur theatre group at the time, a new workshop and storage space, as well as new stage lighting and fans for ventilation.9

In July 1963, the club completed a major reconstruction of the theatre’s stage and proscenium, which were closely modelled after the Mermaid Theatre in London. The new theatre was reportedly the first of its kind in the Far East. Unfortunately, disaster struck barely a month later on 6 August. At around 3 pm, a fire broke out in a backstage storeroom that almost completely gutted the theatre. Nothing was left but the walls. The stage auditorium, workshop, foyer and lighting box were destroyed, leaving only the clubroom and dressing rooms intact.10 Noted The Straits Times:

“By a completely undeserved piece of misfortune, the RAF Seletar Theatre Club has just lost its excellent bijou theatre at the RAF base in a disastrous fire which left almost nothing but the walls. Very little of the club’s properties and wardrobe was saved, and the hard-working amateurs now face the tremendous task of starting all over again the building up of a theatre which had taken them nearly a decade of hard work.”11

Despite the setback, the club did not give up. Members used a temporary stage at the Junior RAF School in Seletar airbase to present Tennessee Williams’ Orpheus Descending at the 1963 Inter-Services Drama Festival. The club also performed The Laboratory and The Dear Departed in February 1964 on that same stage to raise funds for a new theatre. This money – along with the insurance payout, donations from the Nuffield Foundation12 and funds from other service stations – was used to construct a new theatre which opened in June 1964. 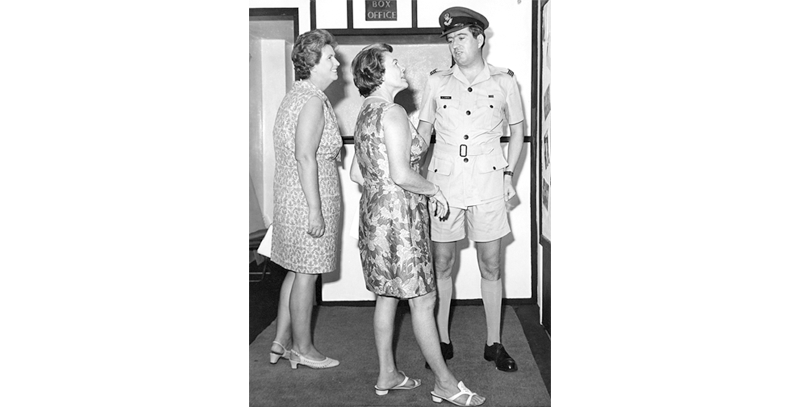 During the two decades of its existence, the Seletar Theatre Club staged a total of 118 productions. As a result, the club was also a crucible for talent, giving aspiring actors, writers, producers, directors and backstage crew a platform to hone their craft on a regular basis.

Pam Ayres, a writer, poet, broadcaster and entertainer, is one of those who attributes her success to the RAF Seletar Theatre Club. 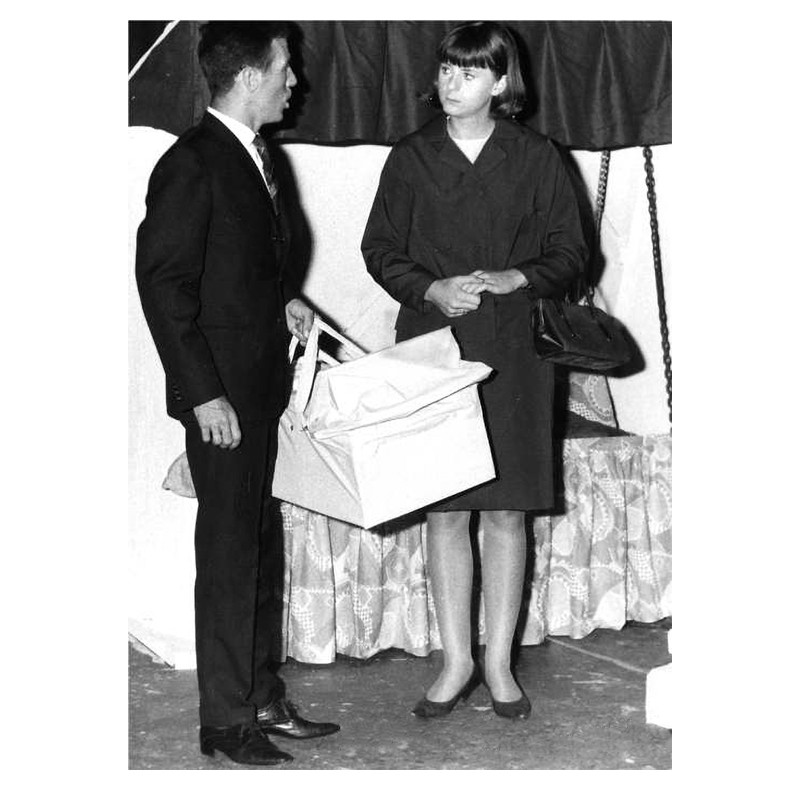 Pam Ayres in a scene from The Poker Secession, 1968. Retrieved from Seletar Theatre Club website.

Ayres joined the Women’s Royal Air Force (WRAF) in April 1965 and was posted to RAF Brampton in Huntingdonshire, England. She was later deployed to RAF Seletar where she worked as an air photography plotter at the Joint Air Reconnaissance Intelligence Centre, Far East (JARIC FE).13

Ayres found Singapore to be an eye-opener. The Singapore River back then was “evil-looking” as it “rolled black, viscous and stinking under the bridge”, while in the city there were “eating stalls to sit at and Nasi Goreng to tackle with chopsticks. There were beggars, prostitutes and transsexuals. It was a long way from eating a paper-wrapped sausage at 6.22 am waiting for the bus to Bicester”.14

Ayres joined the Seletar Theatre Club and appeared in several productions.15 She noted that it was the Friday night get-togethers at the club that kickstarted her writing career. She said:

“On these occasions members of the club would get up on stage to do an impromptu ‘turn’. I wanted to do a turn as well, but I could find nothing to declaim which corresponded with my own sense of humour or that, saddled with my country accent, I could put over in a way that worked.”16

This spurred Ayres to start writing her own material, leading to her first poem titled “Foolish Brother Luke” about a shaky love affair; this was the first of many poems she would eventually write and perform. 17

Ayres left the WRAF in 1969 and received her big break in 1974 when she was asked to read her poem “The Battery Hen” on BBC Radio. It was an instant hit with the audience, who called the radio station to ask for copies of her poems. In 1976, Ayres published her first book of verses, Some of Me Poems, and in 1978, her second book, Thoughts of a Late-Night Knitter. Together, the two publications have sold almost two million copies.18

Ayres, who lives in England today, performed in the Royal Variety show at the London Palladium in 1977 and starred in a 13-part series on British television. 19

A less well-known actor associated with the club is Julianna Goss (née Francis). Goss trained as an actress at the Royal Academy of Dramatic Art (RADA) in London before enlisting in the Women’s Auxiliary Air Force (WAAF) during World War II. She started out as a mechanic but later became a member of the wartime entertainment troupe that toured military bases.

In the WAAF, she met and married Ken Goss, an engine fitter, and became a service wife. They moved to Singapore when Ken was posted to RAF Seletar in 1960. She joined the RAF Seletar Theatre Club and used her RADA credentials to conduct classes. She also acted in and produced several major productions, such as Charley’s Aunt, Roar like a Dove and Archibald MacLeish’s J.B., which was the winner of the Inter-Services Drama Festival in 1962.20

After three years in Singapore, the Gosses left on 19 April 1963 when Ken was posted to RAF Lyneham in Wiltshire, England. At RAF Lyneham, Goss joined the Lyneham Stage Club where she managed to persuade successive station commanders to agree to a purpose-built theatre for the club. It was constructed in 1969 and named The New Theatre. Following her death in 1977, the theatre was renamed Juliana Goss Theatre in her honour. The club continued to stage three shows a year until its closure in 2012 when the RAF withdrew from Lyneham.21 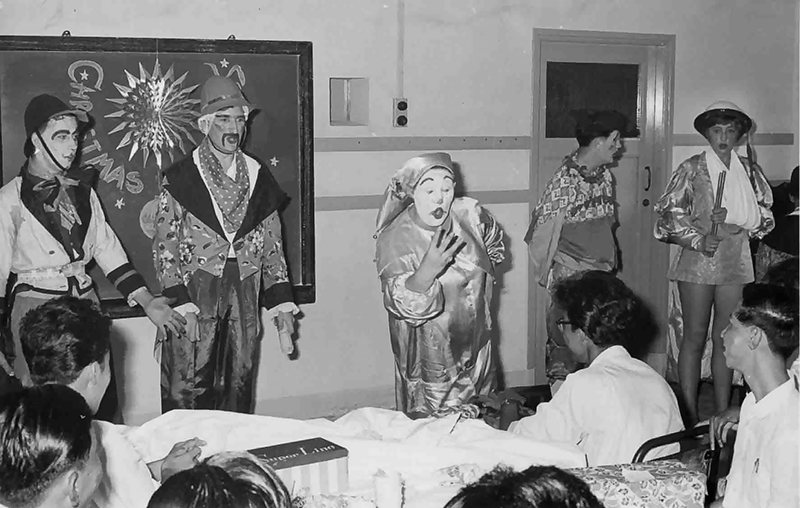 The club’s offerings were a class act, clinching the first prize in the Inter-Services Drama Festival not once but three times – for its productions of Archibald MacLeish’s Pulitzer Prize-winning play J.B. in 1962, Keith Waterhouse’s Billy Liar in 1966 and Trevor Peacock’s Collapse of Stout Party in 1967. 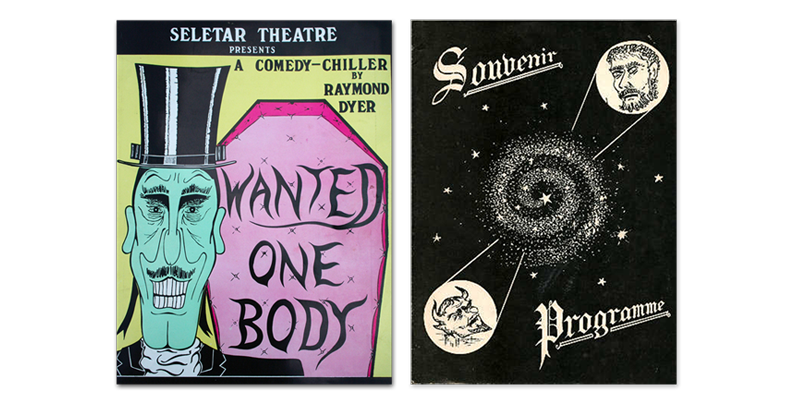 In 1969, the Far East Land Forces organised the first open Festival of Drama in which all English-language dramatic societies in Singapore were eligible to take part. (The Inter-Services Drama Festival, which first started running in 1961, had only been open to British services group). Plays for the Festival of Drama were presented in one-act performances – each lasting between 30 and 50 minutes – on any topic, although themes on societal issues or relating to Singapore were preferred.31

The week-long festival, which was held at the Cultural Centre Theatre in Canning Rise, was organised to promote friendly rivalry, goodwill and understanding among amateur theatre groups in Singapore. The plays were judged on the performance of the actors, production presentation and efficiency of the crew in erecting and dismantling the sets.32

In 1970, during a meeting involving participating groups, it was decided that such events should be organised by Singaporeans and that the Festival of Drama would take on a non-competitive format. Unfortunately, the initial enthusiasm generated by the meeting ultimately fizzled out and, coupled with financial problems, the festival ended up not being staged that year.34

The second edition of the Festival of Drama was organised by the University of Singapore Society in 1971.35 The Seletar Theatre Club did not participate as it had been shuttered the year before. The club closed its doors for the last time on 30 October 1970. Interestingly, for its final curtain call, the club staged Noël Coward’s Blithe Spirit.

Suriati Sani is an Assistant Archivist with the National Archives of Singapore where she handles reference enquiries and helps researchers navigate archival materials. This essay combines her interests in history and theatre arts.
Back to Issue