Mulan’s Many Faces: The Different Versions in the Asian Children’s Literature Collection

Goh Yu Mei examines the National Library’s Asian Children’s Literature Collection to see how the story of Mulan has evolved over time, while Michelle Heng reviews other Asian tales in the acclaimed collection.

These are the opening lines in《木兰辞》(Mulan Ci; The Ballad of Mulan),2 believed to have been composed during the Northern dynasties period (北朝, c. 386–581).3

Widely accepted as the earliest written version of the story of Mulan (木兰), the 62-line poem tells the inspiring story of a young woman who disguises herself as a man so that she can take her aged father’s place when he is conscripted into the army to fight the Tartars. The ballad was subsequently included in《乐府诗集》(Yuefu Shiji; Collection of Yuefu Poetry), an anthology of poetry compiled by Guo Maoqian (郭茂倩) during the Song Dynasty (960–1276). 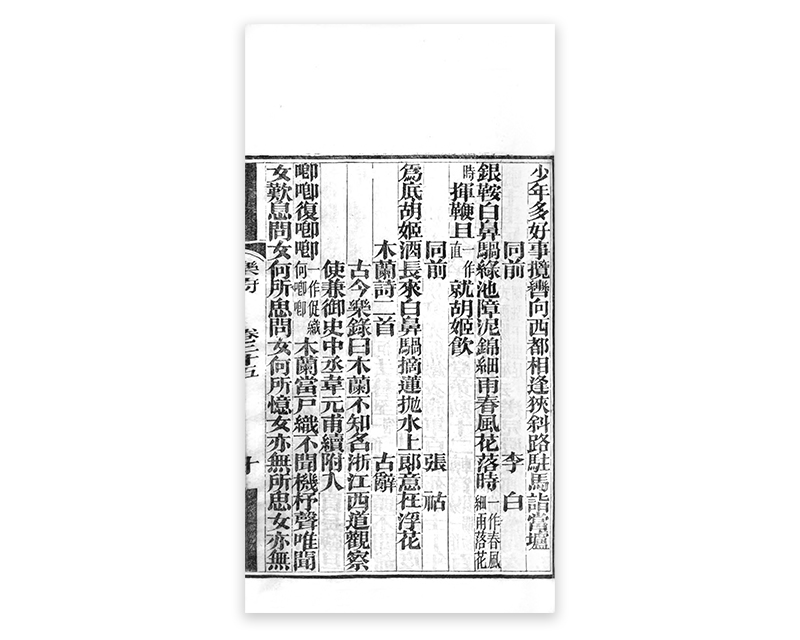 During the Tang dynasty (618–907), the story was retold as《木兰歌》(Mulan Ge; The Song of Mulan), a poem written by Wei Yuanfu (韦元甫). Several centuries later, during the Ming dynasty (1368–1644), Xu Wei (徐渭) composed the opera《雌木兰替父从军》(Cimulan Tifucongjun; Female Mulan Took Her Father’s Place in the Army). The story was then turned into the novel《北魏奇史闺孝烈传》(Beiwei Qishi Guixiao Liezhuan; The Legendary Story of a Filial and Heroic Girl from the Northern Wei) by Zhang Shaoxian (张绍贤) during the Qing dynasty (1644–1912).4 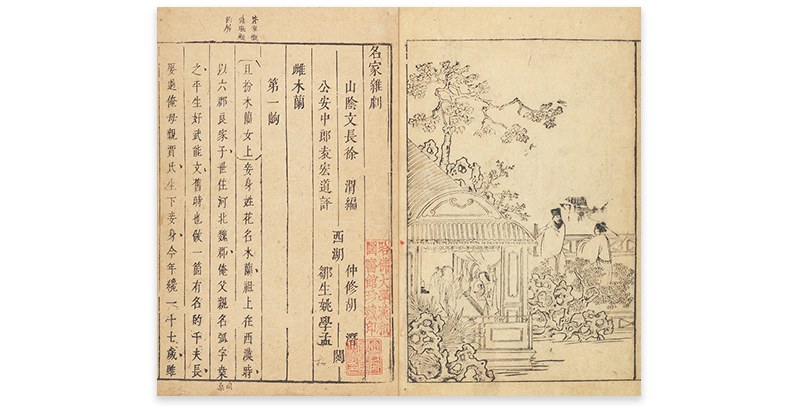 The opera,《雌木兰替父从军》(Female Mulan Took Her Father’s Place in the Army), by Xu Wei (徐渭) during the Ming dynasty is reportedly the first known version of the story of Mulan that states her surname as Hua (花). Image reproduced from 沈泰輯 (1628–1644).《名家杂剧: 三十种三十卷》(16 volumes). China: [s.n.]. Collection of the Harvard-Yenching Library, Harvard University. Retrieved from Harvard Library website (CC BY 4.0).

Although filial piety and loyalty are constant themes in the different representations of Mulan, these values are portrayed differently by different authors. In Zhang Shaoxian’s novel, for instance, Mulan takes her own life when she is forced to choose between returning home to care for her parents (i.e. filial piety), and remaining in the army to serve the emperor (i.e. loyalty). The tragic ending in this narrative of Mulan hints at a criticism of the interpretations of filial piety and loyalty in earlier versions of the tale.5

Recent efforts to reimagine the story of Mulan consist of books, stage adaptations, television serials and movies. These include the chapter “White Tigers” in Maxine Hong Kingston’s The Woman Warrior: Memoirs of a Girlhood Among Ghosts (1976)6 and, of course, Disney’s Mulan, comprising an animated film in 1998 and a live-action drama film in 2020.

Given that the tale is about 1,500 years old, the story of Mulan has inspired numerous books and iterations in various languages and for different age groups, including children. Some of these titles are available in the Asian Children’s Literature Collection (ACL Collection) of the National Library.

The authors or editors of these titles have adopted different approaches in their versions by combining elements of older Mulan stories with new reinterpretations. These can be broadly categorised into two groups: retelling of The Ballad of Mulan, largely sticking to the original poem, and the rewriting of the story of Mulan, which involves adding significant new elements.

Retelling The Ballad of Mulan

(Translation: I remove my armour, change into my old dress; comb my hair by the window, and apply yellow powder in front of the mirror.)

Several titles in the ACL Collection closely follow the format in The Ballad of Mulan. The Song of Mu Lan (1995) by Jeanne M. Lee is a direct translation of the ancient poem alongside its original Chinese text.8 The English translation and the poem, which is faithfully reproduced in traditional Chinese calligraphy by Lee’s father, Chan Bo Wen, are juxtaposed against watercolour paintings on silk by Lee, each corresponding to a scene described in the respective verses.

Lee dedicates the book “to all women, young and old” and notes that “the verses of the poem are still taught to children in China today and are sung in Chinese opera in different dialects”. These hint at the values of filial piety and loyalty conveyed in the story of Mulan, which are still relevant today and that Mulan is a good role model for women.

Another book, Song Nan Zhang’s The Ballad of Mulan (1998), has adopted the same way of depicting the story as Lee, with the narrative in English and the original Chinese poem set against drawings depicting the different scenes.9 (Zhang, who was born in Shanghai and later migrated to Canada, also drew the illustrations in the book.)

In Zhang’s interpretation, each drawing is enclosed within a frame which is similar to how early Chinese books are bound. Although Zhang follows the original storyline closely, he also includes new details and lines. For example, the following lines describe the scene where Mulan appears before her fellow soldiers in female attire:

“What a surprise it was when Mulan appeared at the door! Her comrades were astonished and amazed. ‘How is this possible?’ they asked.”10

The original line from The Ballad of Mulan, “出门看伙伴，伙伴皆惊恐”, only states that when Mulan exits from her room and appears in front of her fellow soldiers, they are astonished. Her fellow soldiers’ question is a minor detail that Zhang has added. 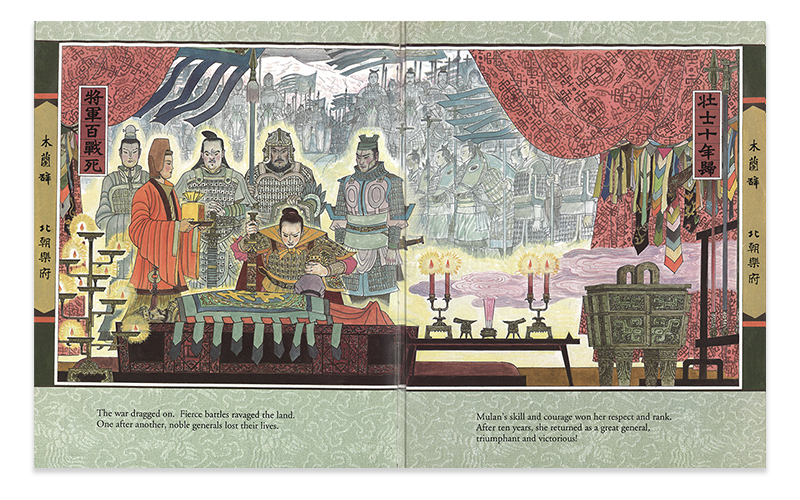 At the end of Zhang’s book, there is a very short section titled “Historical Notes on Mulan” which explains the historical context of Mulan’s life and the development of the story from the early days until the present. It notes that the story (and poem) is a well-known folk tale studied by schoolchildren in China today. Zhang writes that the story continues to inspire Chinese women, and he dedicates the book to “everyone with an interest in ancient Chinese culture and literature”.

In Singapore, the story of Mulan has been rewritten as a Chinese picture book,《花木兰》(Hua Mulan), published by Newton Publications. Written by Li Xiang (李想) with illustrations by Zhang He (张禾), it follows the original storyline closely, although the author has added minor new scenes such as Mulan’s father teaching her martial arts.

The picture book was first published in 1998, with a new edition two years later.11 The 1998 edition contains the original poem in classical Chinese, a retelling of the story with additional details and a section on the historical context of the ballad. The 2000 edition includes the original poem rendered in simplified Chinese, which the 1998 version does not have. 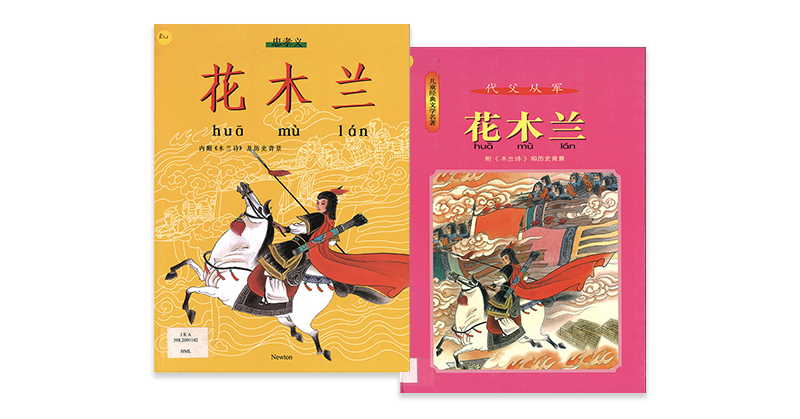 Re-creating the Story of Mulan

(Translation: The male rabbit hops rapidly, while the female rabbit has blurry eyes. When both are running side by side, how can one tell if I am male or female?)

Several other titles about Mulan in the ACL Collection involve much more rewriting, including significant details or scenes not found in the original poem, The Ballad of Mulan.

Fa Mulan: The Story of a Woman Warrior (1998) by Robert D. San Souci, and illustrated by Jean Tseng and Mou-Sien Tseng, is one such example. (This version by San Souci was probably the inspiration for Disney’s 1998 animated film).13 In his “Author’s Note”, San Souci explains that he added scenes not explicitly mentioned in the original poem by “drawing on [his] study of the original poem in its historical and cultural context”.14

San Souci notes that the ballad had few details of the campaign against the Tartars so he obtained information on military organisation and strategy, as well as the advice Mulan shares with her generals, from Sun Tzu’s The Art of War. “It seems logical that Mulan, in her rise to generalship, would have studied this essential text in length – even committing its principles to memory,” he adds.15

San Souci also injects an element of romance in his Mulan story, drawing his inspiration from the reference to a pair of male and female rabbits in the original verse that he had interpreted as suggesting a marriage bond.

Other contemporary authors have used details that might have originated from Xu Wei’s opera,《雌木兰替父从军》. For example,《花木兰》(Hua Mulan; 2002) by Yong Chun (永春) mentions Mulan’s surname, Hua (花), along with her father’s name, Hua Hu (花弧), which was first mentioned in Xu’s opera.16 In Mulan: A Story in English and Chinese (2014) by Li Jian, the author writes that “Mulan learned Chinese calligraphy and reading from her father at a young age”,17 while Gang Yi and Xiao Guo’s The Story of Mulan: The Daughter and the Warrior (2007) says that “[Mulan’s] father taught her archery and horseback riding”.18 These embellishments are found in Xu Wei’s opera and not in the original poem.

While Mulan’s story strongly reflects Chinese culture and values, different authors deal with these elements in different ways, as the various versions of the story in the ACL Collection demonstrate.

The titles published in North America put more effort into providing background and context. Lee notes that the poem is still being studied in schools and performed as operas in China today. San Souci writes that he has incorporated elements from The Art of War and believes that Mulan could have looked up to the Maiden of Yue (越女; Yue Nü; a legendary swordswoman from the Spring and Autumn period) as a role model. Meanwhile, Zhang dedicates his book to all who are interested in Chinese culture and literature. In many ways, these authors appear to be attempting to explain the cultural context of Mulan’s story to an unfamiliar audience.

On the other hand, the authors whose books are published in Asia appear to take it for granted that their audience has the necessary background. Yong Chun merely notes that Mulan exemplifies the Chinese values of loyalty (忠), filial piety (孝), benevolence (仁) and love (爱), while Li Xiang simply states on the back cover of his book that the original poem《木兰辞》is a gem passed down through history. No extra explanations are given.19

These differences probably arise from the writer’s perception of who the readers will be.

Differences in treatment notwithstanding, the fundamental story of Mulan taking her father’s place in the army has not changed over the last 1,500 years. The enduring popularity of her story is testimony to the fact that this particular tale strikes a deep chord within people, regardless of time period or cultural milieu. And Mulan herself continues to serve as an inspiration and role model for children today.

Goh Yu Mei is a Librarian at the National Library, Singapore, working with the Chinese Arts and Literary Collection. Her research interest lies in the interaction between society and Chinese literature.

Michelle Heng is a Librarian with the National Library, Singapore. She has curated a tribute showcase, “Edwin Thumboo – Time-travelling: A Poetry Exhibition” in 2012, and compiled and edited an annotated bibliography on Edwin Thumboo, Singapore Word Maps: A Chapbook of Edwin Thumboo’s New and Selected Place Poems (2012) as well as the Selected Poems of Goh Poh Seng (2013).
Back to Issue