In this issue’s cover story, we shine the spotlight on three murals that were once showpieces at the former Paya Lebar Airport. Two of the three artworks have already been lost. Is there hope for the last one? 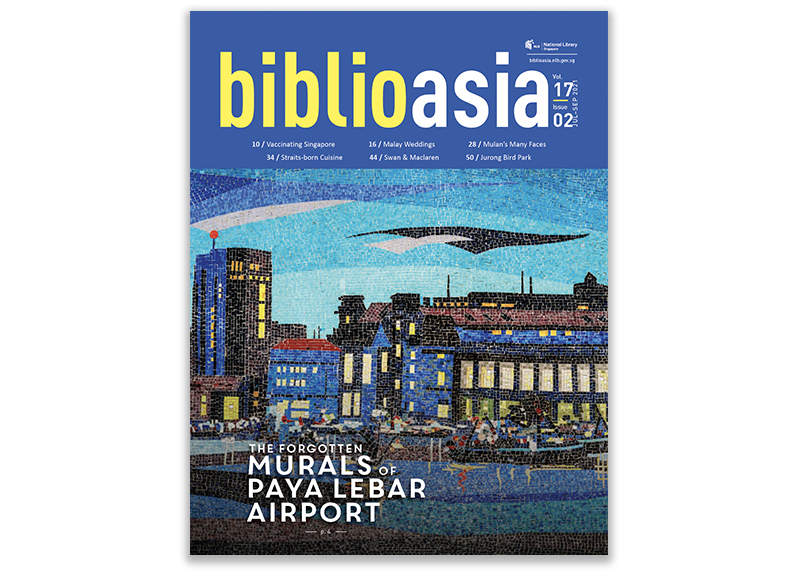 Vaccinating a Nation: A Brief History
The first efforts at vaccinating here date back to 1819. Ong Eng Chuan has the details.(PDF)

Malay-Muslim Weddings: Keeping Up with the Times
Customs and traditions change over time. Asrina Tanuri and Nadya Suradi trace how Malay weddings here have evolved since the 1950s.(PDF)

Mulan’s Many Faces
Goh Yu Mei examines the Asian Children’s Literature Collection to see how Mulan’s story has evolved, while Michelle Heng reviews other stories in the acclaimed collection.(PDF)

Urang Banjar: From South Kalimantan to Singapore
Zinnurain Nasir and Nasri Shah shed light on the Banjar people in Singapore.(PDF)

Mansion Blocks, Flats and Tenements: The Advent of Apartment Living
Through buildings like Amber Mansions and Eu Court, Swan & Maclaren helped to introduce the concept of apartment living in Singapore, says Julian Davison.(PDF)

How Jurong Bird Park Was Hatched
Zoe Yeo gives a bird’s-eye view of the setting up of one.(PDF)