In 1967, the Singapore government launched the Eat More Wheat campaign to reduce rice imports, because it was expensive compared to wheat. Award-winning cookbook author and culinary instructor Christopher Tan tells us about the campaign and makes a unique milk noodle soup dish from a 1969 cookbook, which was published in conjunction with the campaign. The noodle batter recipe calls for evaporated milk, an unusual ingredient that suggests Dutch legacy in a possibly Indonesian-Chinese recipe.

This recipe by Mrs Choa was submitted to an Eat More Wheat cooking contest organised by Radio TV Singapore in the late 1960s. According to the contest criteria, the ingredients could not cost more than S$3 for a dish to serve four. For this recipe, the ingredients came up to S$1.32.

The recipe has measurements in ounces and tahil, as the units of measurements in Singapore were not standardised then. In 1971, two years after the recipe book was published, the metric sytem was adopted, and the use of imperial (e.g. ounces, gallons) and local (e.g. kati, tahil) measurements was dropped. Recipe of milk noodle soup showing the total cost of ingredients and different systems of measurements. From "The Proof Is in the Eating" Recipe Book (Singapore: RTS Enterprises, 1969).

Christopher used a murukku press to make the noodles, after experimenting with various equipment, including a sieve as recommended by the recipe, and a chendol press. 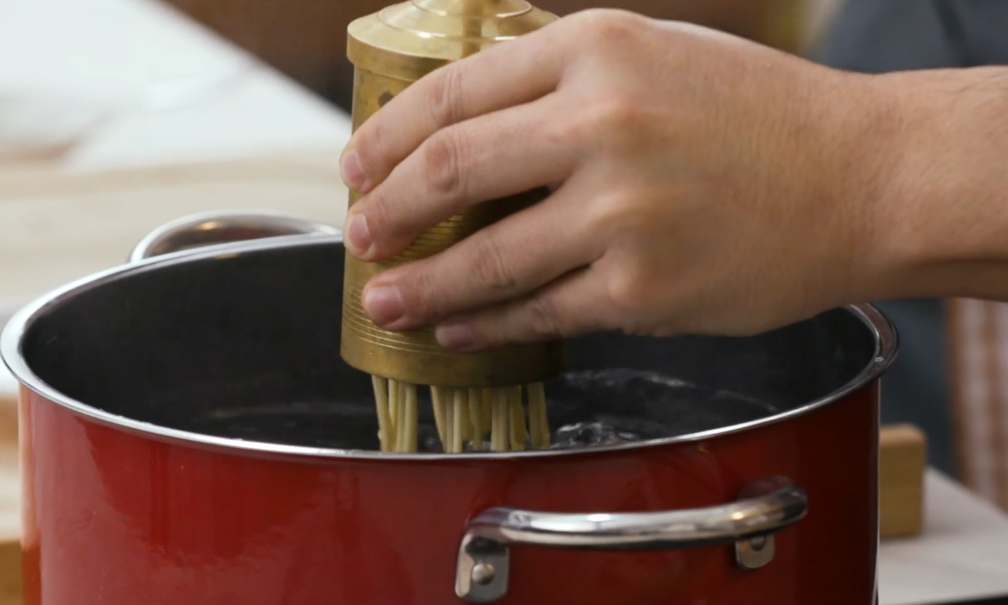 An innovative method to make noodles with the murukku press.

Milestones to the Metric System
Prior to the 1970s, Singapore used three different systems of weights and measures. Shereen Tay traces how we transitioned to the metric system.

Love Is a Many-Layered Thing
What lies in this vale of tiers? Christopher Tan delves into lapis legit, the cake as famous for its exacting recipe as for the unparalleled flavour of its buttery layers.

Resources from the Archives