Travel writer Desiree Koh shares her wanderlust and love for Southeast Asia and remembers the places that have impacted her life and the way she sees the world. 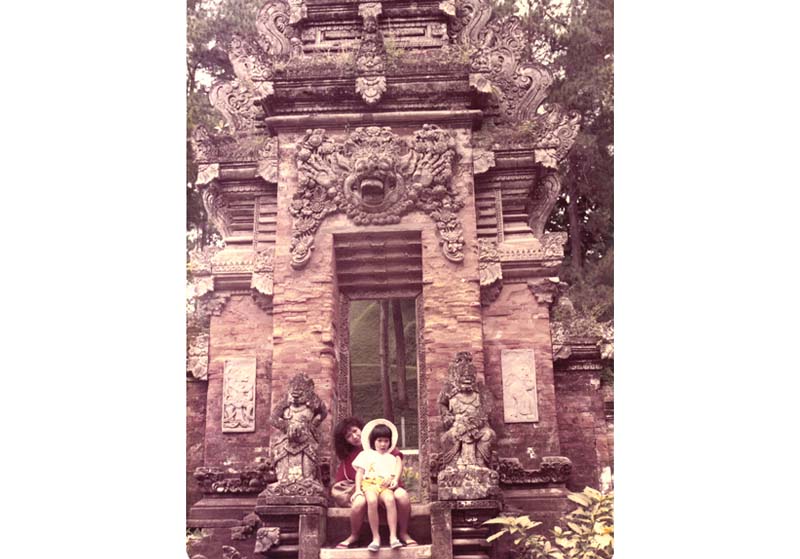 Temple-trotting in Bali in 1982. Courtesy of Desiree Koh.

My earliest travel memory is of my dad dunking me into a toddler-sized wooden barrel of warm water after a long day of building misshapen forts and castles on Tanjung Pinang beach on Bintan. I was four years old at the time, and had scraped my knees spilling and tumbling on the sand. Although the soap stung, nothing but sweet memories remain.

My parents didn’t have very much back then, but what they could spare came in the form of an annual family holiday during Chinese New Year, red-letter dates I looked forward to more than red packets. Although my hong bao (red packet) hoard was lighter than my cousins’, I came home with exotic shells, tacky souvenirs and glowing sunburns. In addition to scoring an extra day or two off from school, I went on adventures few of my friends could only dream of experiencing in the 1980s.

We didn’t make it very far beyond places like Bali, Bangkok and Pattaya, but I found these places endlessly fascinating – time zones and seasons other than hot and humid were foreign concepts to me. Those first plane rides were infinitely more exciting than anything Santa’s sleigh could offer and I relished that annual rush in its entirety. I devoured everything we were served on board and emptied all the sachets of sugar and powdered creamer into my tea because I didn’t want to leave a single item behind. In those days, smiling Thai Airways stewardesses would hand out fresh purple orchid corsages to female passengers. Mine would be proudly pinned to my Smurfs backpack and left there until the petals wilted and fell off (I made sure my Smurfette doll had one on as well). I wrote postcards, asked for playing cards and thanked every flight attendant on the way out as my mum taught me to, something I remain fond of doing.

The rush of takeoff, the thrill of being enveloped by blobs of clouds and the triumph of landing (the bumpier the better!) were just the beginning. We have so many family pictures, yellowing with age – the result of my dad toting his trusty Yashica camera and a backpack full of 35mm Kodak film everywhere we went – but still capturing all our smiles, artfully arranged by my mum in photo albums describing each destination. Who cares that Southeast Asian airports of yore resembled bare bones budget terminals, with luggage belts that frequently wheezed and groaned under the weight of heavy bags, and air-conditioning that was mostly non-existent. My passport was alive with colourful visa stamps, and each journey was filled with a palpable sense of expectation and joy that I have not been able to replicate in my later travels as an adult.

I remember the desperation of a fruit peddler trying to sell us bananas through our coach window as we pulled away from a Balinese temple, my mum explaining that there were those far worse off than us. The floating Chao Phraya market was such a charming concept, until Bangkok became a clichéd weekend budget airline getaway. Siem Reap is unrecognisable to me now as there wasn’t a single resort or proper restaurant when we went; I remember a police officer hounding my dad to buy some of his rusty medals – cash before valour. Sleepy Phuket was just beginning to build its first wooden chalets on its beaches – the only other foreigners besides us were the Germans and Scandinavians, who of course were everywhere in Southeast Asia before anyone else – and so we went because it was affordable. There were no go-go bars in Patpong, no full moon parties, no hucksters and hustlers lurking around corners. It was the perfect setting for our small family; we went puttering in little boats (with no life jackets) to secluded islands, lazed on the beaches without sunscreen (the horrors of skin pigmentation unbeknownst to us), and ate food from streetside hawkers, salmonella be damned. 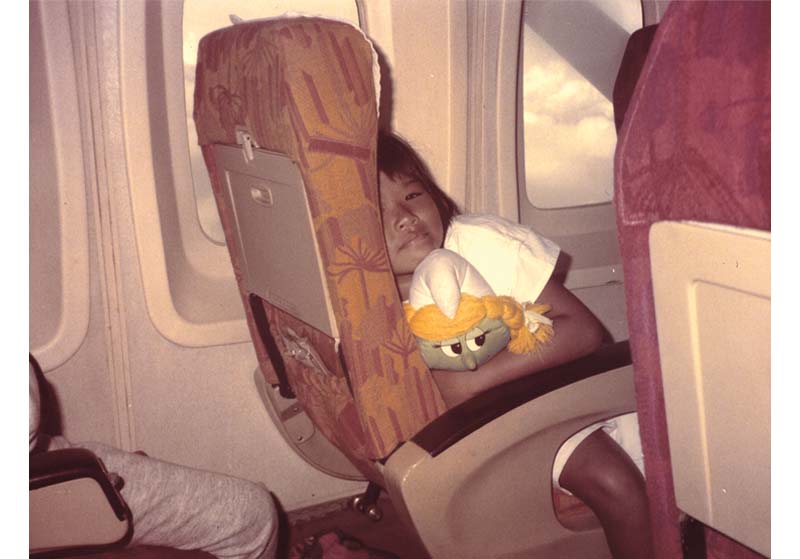 Sunburned and homebound from Phuket on Thai Airways in 1984. Courtesy of Desiree Koh.

What was normal for the Koh family made me stand out at school, beyond the shenanigans I was notorious for (perhaps my roaming the classroom to play with friends in between lessons may have been an early sign of my repressed wanderlust?). When I moved from my neighbourhood primary school to a well-known one, I found myself in the company of peers who went skiing in Lake Tahoe in the US or on multi-city European tours. Although it sometimes crossed my mind that Disneyland could be fun, I didn’t feel completely deprived either – no matter how new or weird my experiences in Southeast Asia, the warmth, the smiles and humility of the people and the spicy flavours always reminded me of home. The school compositions I wrote were inspired by people, food and scenes like nothing I knew of in too quickly developing Singapore, and I learnt to empathise – by the time I first encountered a rancid outhouse in Zhengzhou, China, I didn’t turn back and run but bravely sallied forth.

For show-and-tell in primary four, I brought an ashtray (with a mermaid perched on one side) made of fake coral from Hua Hin and said I wanted to be a “travellogist” when I grew up (whatever that meant). I didn’t know it then, but it was only when I arrived at university in Chicago and newfound American friends marvelled at my “jetsetting” ways that I realised how fortunate I was to have grown up in Singapore and traversed the riches of our region. I tried to explain that getting on a three-hour flight to Hanoi wasn’t too different from taking the Amtrak train from Chicago to Boston. But it’s still the same country! they would retort, and I had to agree. Southeast Asia is unique in that it’s a mosaic of individual countries with their own distinct histories, cultures and cuisines, despite their close proximity to each other. No one slurping a bowl of beef pho in Ho Chi Minh City is going to confuse that soupy dish with a plate of wok-fried soy-sauce blackened Hokkien noodles in Kuala Lumpur. The flavour profiles of both dishes are as different as night and day – as both cities are.

More than 30 years removed from that Tanjung Pinang beach and having traversed many countries across four other continents since, I know that those childhood travels to Southeast Asian countries on the cusp of progress is one of the best of many life lessons my parents have given me. For every Paris, New Orleans, Caribbean and Melbourne, there is a Chiang Mai, Ho Chi Minh City, Inle Lake and Penang that I will never get tired of. It’s been uplifting watching our neighbouring countries come into their own and, together with Singapore, form one of the most exciting parts of the world right now. 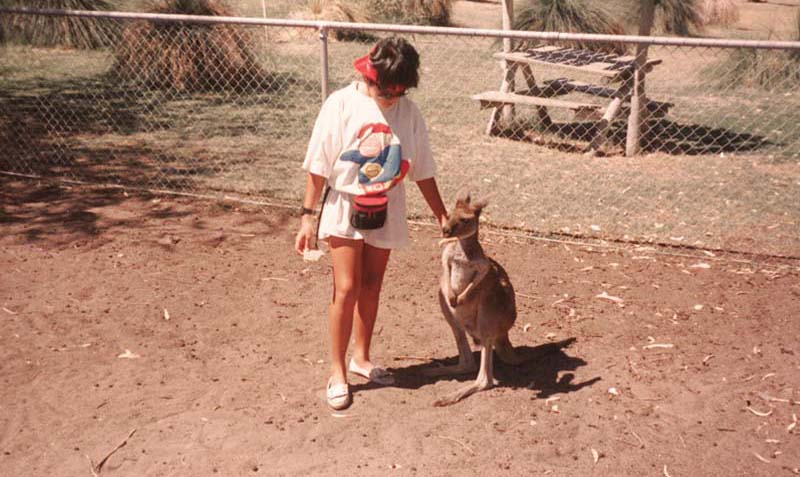 The writer with Captain Kangaroo at Australia’s Gold Coast in 1988. Courtesy of Desiree Koh.

Everybody, it seems, wants a piece of Southeast Asia – there’s Burmese food in Iowa, Malaysian in every London neighbourhood and Indian vendors flipping prata in Copenhagen’s trendy Vesterbro district. At the Diageo Reserve World Class championships in July, possibly the most prestigious bartending championships ever, Singapore’s Peter Chua finished top six and Bangkok’s Ronnaporn Kanivichaporn held his own in the final 12 – that is how hot Southeast Asia has become, and less than a heartbeat behind trendsetting global cities. I have been incredibly lucky to enjoy front row seats to what feels like an indie film morphing into a blockbuster franchise – happening right here in my own backyard.

Aficionados of Singapore Airlines may grumble at flagging service standards in the last decade or so, but it’s not for nothing that it still trumps all other airlines in various annual “best of” polls. Despite the sometimes forced Anglo-Saxon accents over the PA system (“please fas-turn your sit-belts”), my heart swells with pride whenever I see SQ crew striding through an airport with poise and confidence, the women in their elegant sarong kebaya – it’s an emblem of how we leave our mark across the globe.

My family still travels together at least once a year, and whenever we find ourselves in Chiang Mai, we invariably engage the services of our good friend Deer Sriwasat and his van. Deer knows that our days of riding elephants and visiting craft factories are far behind, and so we explore Northern Thailand, discovering little-visited temples and sussing out roadside eats. One of my favourite stops is along the highway between Chiang Mai and Chiang Rai where 90-year-old Charin Singkarat bakes 30 pies every morning using fruit and nuts harvested from her plantation. The pies are essentially Thai flavours encased in crumbly American-style crusts that she learned to make while living in Los Angeles for over 18 years. Who would have imagined that East would meet West in the backroads of Thailand’s remote North?

I’ve always described Singapore as Asia Lite to friends from overseas, a place with all the comforts of a modern city while serving as a convenient launch point for explorations into the region. What my parents allowed me to see and experience from a young age has shaped my 12 years of living in the US, and my work as a travel writer with collaborators from around the world. More importantly, my work continues to inspire new explorations. When I meet people who marvel at the colonial grace of Malacca, are awestruck by majestic Borobodur or have been lulled by the charms of Luang Prabang, my first response is always, “I told you so.” 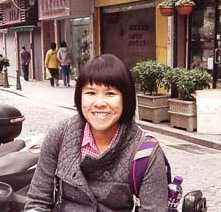 Born and raised in Singapore, Desiree Koh is a writer and editor who spent 12 years in Chicago, studying at the Medill School of Journalism and later experiencing the other side of the world. Now back home, she enjoys discovering a city that is constantly changing and travels further afield for work and adventure. She writes on popular culture, food and sports for in-flight magazines such as SilverKris, Sawasdee and enVoyage, as well as local and international publications. Her most recent work was for the Louis Vuitton City Guide: Singapore, slated for publication in November 2014.