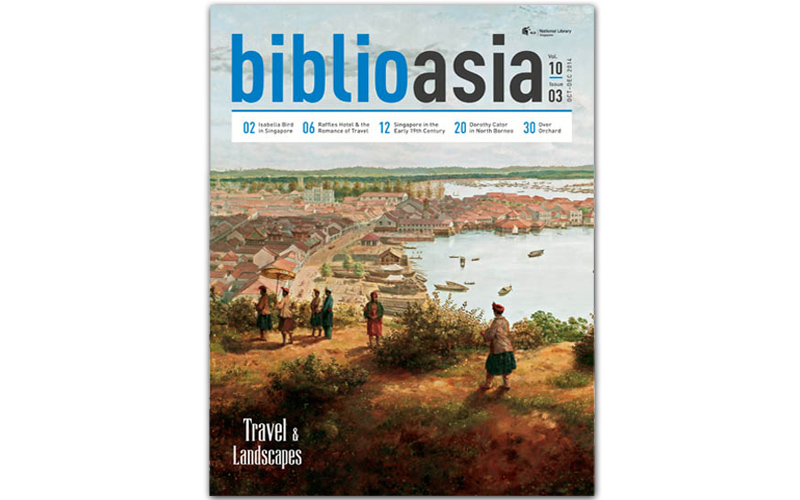 Punkahs Everywhere
One of the great travel writers of the 19th century, Isabella Bird was 47 when she visited Singapore. She had just spent several months exploring Japan and was about to embark on a journey through the Malay Peninsula. In between, she made a brief stop in Singapore and wrote about it in a letter to her sister in Edinburgh.(PDF)

Exploring My Own Backyard
Travel writer Desiree Koh shares her wanderlust and love for Southeast Asia and remembers the places that have impacted her life and the way she sees the world.(PDF)

Raffles Hotel & the Romance of Travel
Gretchen Liu traces the history of this grand hotel, from its heyday of glitz and glamour to near ruin and its subsequent reincarnation into the heritage icon it is today.(PDF)

Singapore Through the Eyes of 19th-century Westerners
Nor Afidah Abd Rahman shares how the impressions the first Western travellers held of colonial Singapore were influenced by their preconceived perceptions of the exotic East.(PDF)

Tales of the Dragon’s Tooth Strait
Lee Meiyu offers us a glimpse of pre-colonial Singapore as seen through the eyes of the 14th-century Chinese traveller Wang Dayuan.(PDF)

Writing from the Periphery: Dorothy Cator in British North Borneo
Janice Loo explains how the travel writings by women such as Dorothy Cator reveal the complex relationships between colonisers and the colonised.(PDF)

Planning a Nation: The Concept Plan
Singapore’s towering skyscrapers and its evolving landscape is by no means accidental. Lim Tin Seng walks us through the country’s various Concept Plans, each carefully put together in response to the city’s changing needs.(PDF)

Over Orchard
Orchard Road as we know it today is a far cry from its quiet beginnings as a plantation and residential area. Fiona Tan takes us back in time to revisit some of Orchard’s most distinctive landmarks.(PDF)

Lee Kip Lin: Kampung Boy Conservateur
Bonny Tan takes a look into the life of the late Lee Kip Lin, a man who wore many hats – as student, educator and mentor – but who is perhaps best remembered for his passion for conserving Singapore’s pre-war architecture in his writings and teaching.(PDF)

Designed for Use: library@orchard Makes a Comeback
Featuring wall-to-ceiling bookshelves, collaborative spaces and innovative services, Sufyan Alimon and Eunice Ang share more about what the newly reopened and revamped library@orchard has to offer.(PDF)

In Vogue: Singapore Fashion Trends from 1960s to 1990s
From traditional dress to mini-skirts, pantsuits and bell-bottoms, Jessie Yak and Sundari Balasubramaniam highlight Singapore’s style trends of the 1960s to 1990s through fashion magazines.(PDF)