One of the great travel writers of the 19th century, Isabella Bird was 47 when she visited Singapore. She had just spent several months exploring Japan and was about to embark on a journey through the Malay Peninsula. In between, she made a brief stop in Singapore and wrote about it in a letter to her sister in Edinburgh. 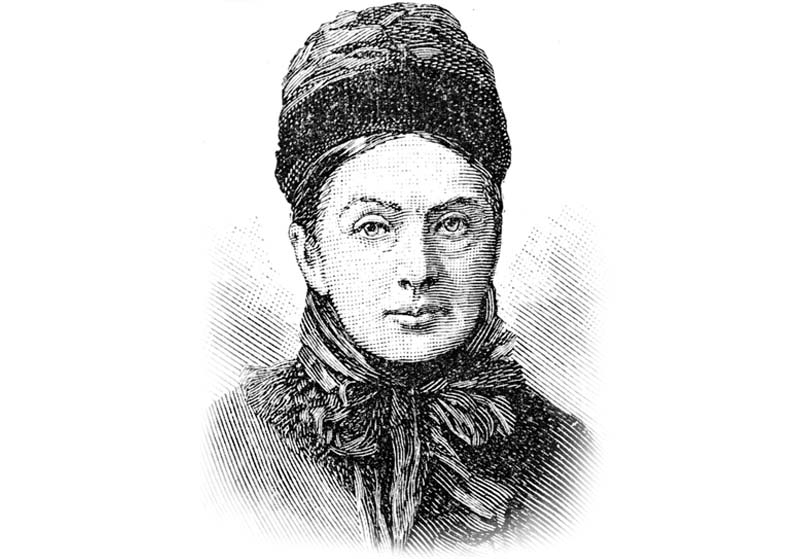 Isabella Bird (1831–1904) was one of the first female explorers and travellers. Wikimedia Commons.

I had scarcely finished breakfast at the hotel, a shady, straggling building, much infested by ants, when Mr. Cecil Smith, the Colonial Secretary, and his wife called, full of kind thoughts and plans of furtherance; and a little later a resident, to whom I had not even a letter of introduction, took me and my luggage to his bungalow. All the European houses seem to have very deep verandahs, large, lofty rooms, punkahs1 everywhere, windows without glass, brick floors, and jalousies and “tatties” (blinds made of grass or finely-split bamboo) to keep out the light and the flies. This equatorial heat is neither as exhausting or depressing as the damp summer heat of Japan, though one does long “to take off one’s flesh and sit in one’s bones.”

As Singapore is a military station, and ships of war hang about constantly, there is a great deal of fluctuating society, and the officials of the Straits Settlements Government are numerous enough to form a large society of their own. Then there is the merchant class, English, German, French, and American; and there is the usual round of gaiety, and of the amusements which make life intolerable. I think that in most of these tropical colonies the ladies exist only on the hope of going “home!” It is a dreary, aimless life for them – scarcely life, only existence. The greatest sign of vitality in Singapore Europeans that I can see is the furious hurry in writing for the mail. To all sorts of claims and invitations, the reply is, “But it’s mail day, you know,” or, “I’m writing for the mail,” or, “I’m awfully behind hand with my letters,” or, “I can’t stir till the mail’s gone!” The hurry is desperate, and even the feeble Englishwomen exert themselves for “friends at home.” To judge from the flurry and excitement, and the driving down to the post office at the last moment, and the commotion in the parboiled community, one would suppose the mail to be an uncertain event occurring once in a year or two, rather than the most regular of weekly fixtures! The incoming mail is also a great event, though its public and commercial news is anticipated by four weeks by the telegraph.

My short visit has been mainly occupied with the day at the Colonial Secretary’s Lodge, and in walking and driving through the streets. The city is ablaze with colour and motley with costume. The ruling race does not show to advantage. A pale-skinned man or woman, costumed in our ugly, graceless clothes, reminds one not pleasingly, artistically at least, of our dim, pale islands. Every Oriental costume from the Levant to China floats through the streets – robes of silk, satin, brocade, and white muslin, emphasised by the glitter of “barbaric gold;” and Parsees in spotless white, Jews and Arabs in dark rich silks; Klings in Turkey red and white; Bombay merchants in great white turbans, full trousers, and draperies, all white, with crimson silk girdles; Malays in red sarongs; Sikhs in pure white Madras muslin, their great height rendered nearly colossal by the classic arrangement of their draperies; and Chinamen of all classes, from the coolie in his blue or brown cotton, to the wealthy merchant in his frothy silk crepe and rich brocade, make up an irresistibly fascinating medley.

The Kling men are very fine-looking, lithe and active, and, as they clothe but little, their forms are seen to great advantage. The women are, I think, beautiful – not so much in face as in form and carriage. I am never weary of watching and admiring their inimitable grace of movement. Their faces are oval, their foreheads low, their eyes dark and liquid, their noses shapely, but disfigured by the universal adoption of jewelled nose-rings; their lips full, but not thick or coarse; their heads small, and exquisitely set on long, slender throats; their ears small, but much dragged out of shape by the wearing of two or three hoop-earrings in each; and their glossy, wavy, black hair, which grows classically low on the forehead, is gathered into a Grecian knot at the back. Their clothing, or rather drapery, is a mystery, for it covers and drapes perfectly, yet has no make, far less fit, and leaves every graceful movement unimpeded. It seems to consist of ten wide yards of soft white muslin or soft red material, so ingeniously disposed as to drape the bust and lower limbs, and form a girdle at the same time. One shoulder and arm are usually left bare. The part which may be called a petticoat – though the word is a slur upon the graceful drapery – is short, and shows the finely-turned ankles, high insteps, and small feet. These women are tall, and straight as arrows; their limbs are long and rounded; their appearance is timid, one might almost say modest, and their walk is the poetry of movement. A tall, graceful Kling woman, draped as I have described, gliding along the pavement, her statuesque figure the perfection of graceful ease, a dark pitcher on her head, just touched by the beautiful hand, showing the finely moulded arm, is a beautiful object, classical in form, exquisite in movement, and artistic in colouring, a creation of the tropic sun. What thinks she, I wonder, if she thinks at all, of the pale European, paler for want of exercise and engrossing occupation, who steps out of her carriage in front of her, an ungraceful heap of poufs and frills, tottering painfully on high heels, in tight boots, her figure distorted into the shape of a Japanese sake bottle, every movement a struggle or a jerk, the clothing utterly unsuited to this or any climate, impeding motion, and affecting health, comfort, and beauty alike? 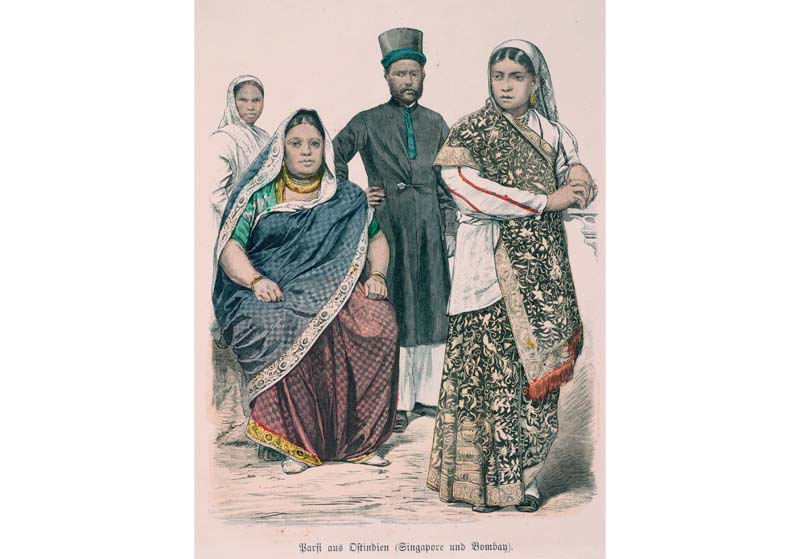 An artist’s impression of clothing worn by Indian women in Singapore. This was published in The History of Costumes by Braun and Schneider in 1880. Courtesy of National Museum of Singapore, National Heritage Board.

It is only the European part of Singapore which is dull and sleepy looking. No life and movement congregate round the shops. The merchants, hidden away behind jalousies in their offices, or dashing down the streets in covered buggies, make but a poor show. Their houses are mostly pale, roomy, detached bungalows, almost altogether hidden by the bountiful vegetation of the climate. In these their wives, growing paler every week, lead half-expiring lives, kept alive by the efforts of ubiquitous “punkah-wallahs;” writing for the mail, the one active occupation. At a given hour they emerge, and drive in given directions, specially round the esplanade, where for two hours at a time a double row of handsome and showy equipages move continuously in opposite directions. The number of carriages and the style of dress of their occupants are surprising, and yet people say that large fortunes are not made now-a-days in Singapore! Besides the daily drive, the ladies, the officers, and any men who may be described as of “no occupation,” divert themselves with kettle-drums, dances, lawn tennis, and various other devices for killing time, and this with the mercury at 80°! Just now the Maharajah of Johore, sovereign of a small state on the nearest part of the mainland, a man much petted and decorated by the British Government for unswerving fidelity to British interests, has a house here, and his receptions and dinner parties vary the monotonous round of gaieties. 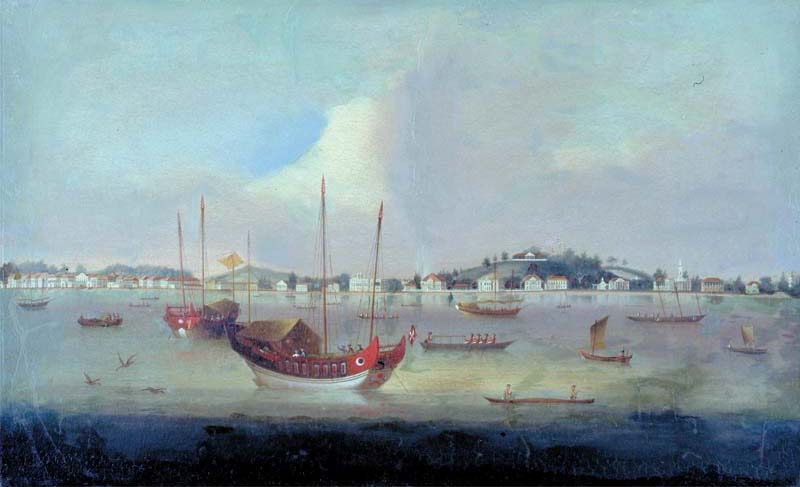 “View of Singapore from the Sea”, produced around 1848 by an unknown artist, offers a glimpse of what early travellers would have seen as they arrived in Singapore by sea. Courtesy of National Museum of Singapore, National Heritage Board.

The native streets monopolise the picturesqueness of Singapore with their bizarre crowds, but more interesting still are the bazaars or continuous rows of open shops which create for themselves a perpetual twilight by hanging tatties or other screens outside the sidewalks, forming long shady alleys, in which crowds of buyers and sellers chaffer over their goods, the Chinese shopkeepers asking a little more than they mean to take, and the Klings always asking double. The bustle and noise of this quarter are considerable, and the vociferation mingles with the ringing of bells and the rapid beating of drums and tom-toms, an intensely heathenish sound. And heathenish this great city is. Chinese joss-houses, Hindu temples, and Mohammedan mosques almost jostle each other, and the indescribable clamour of the temples and the din of the joss-houses are faintly pierced by the shrill cry from the minarets calling the faithful to prayer, and proclaiming the divine unity and the mission of Mahomet in one breath.

How I wish I could convey an idea, however faint, of this huge, mingled, coloured, busy, Oriental population; of the old Kling and Chinese bazaars; of the itinerant sellers of seaweed jelly, water, vegetables, soup, fruit, and cooked fish, whose unintelligible street cries are heard above the din of the crowds of coolies, boatmen, and gharriemen waiting for hire; of the far-stretching suburbs of Malay and Chinese cottages; of the sheet of water, by no means clean, round which hundreds of Bengalis are to be seen at all hours of daylight unmercifully beating on great stones the delicate laces, gauzy silks, and elaborate flouncings of the European ladies; of the ceaseless rush and hum of industry, and of the resistless, overpowering, astonishing Chinese element, which is gradually turning Singapore into a Chinese city! I must conclude abruptly, or lose the mail.

This extract is taken from Traveller’s Tales of Old Singapore by Michael Wise (2008), published by Marshall Cavendish. This letter was first written by Isabella Bird in 1879 and published in The Golden Chersonese in 1883. Reprinted with permission.
Back to Issue