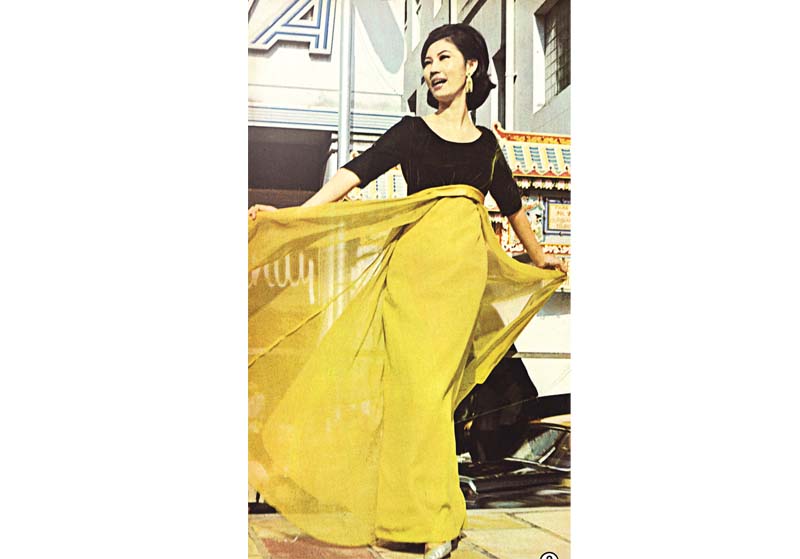 In May 2014, the Asian Fashion Exchange was held, celebrating the best of Asian fashion and designers and doubling as a platform for young emerging talent to showcase their collections. To tie in with the event, the National Library held a week-long retrospective on the fashion trends of past decades with a display of books and women’s magazines.

The evolution of fashion and clothing in Singapore has been shaped by climatic, economic, political, social and cultural influences. As Singapore transformed from a fishing village into a developed nation, the clothing we wore also took shape accordingly. In the early 1900s right until the 1950s, people – immigrants as well as the indigenous Malays – mostly wore traditional ethnic attire such as the Malay baju kurong, Indian sari, Peranakan or Indonesian sarong kebaya and Chinese cheongsam. Western attire among women was fairly uncommon, save for expatriates and the handful of locals who were educated abroad.

Then came the advent of television in 1963. Fashion in the 1960s became heavily influenced by the media, with styles influenced by movies and celebrities such as the Beatles. In the 1970s, dance film Saturday Night Fever starring John Travolta single-handedly popularised disco dressing. In the 1980s and 90s, work and career advancement became priorities, and fashion focused on power dressing. People also became interested in sports and fitness, and apparel was designed to suit their lifestyles. Traditional costumes were still valued but took a backseat and were mainly worn during festive occasions.

There were only a handful of fashion designers in Singapore in the 1960s, one of whom was Roland Chow, who frequently contributed his elegant designs to Singapore’s earliest women’s magazine Her World. The designer scene became more active from the 1970s. In 1974, designer Tan Yoong was the first non-Japanese winner in the 5th Kanebo Japan Grand Award (haute couture section). Two years later, he won the silver award. His unique and exquisite designs cemented his reputation as one of Singapore’s top designers.

Although the contemporary fashion scene today is peppered with designers like Ashley Isham, Jo Soh, Priscilla Shunmugam, Keith Png and Jonathan Seow – some of whom have established an international presence – older fashion stalwarts from earlier decades such as Tan Yoong, Thomas Wee, Celia Loe and Francis Cheong still contribute to the Singapore fashion scene. 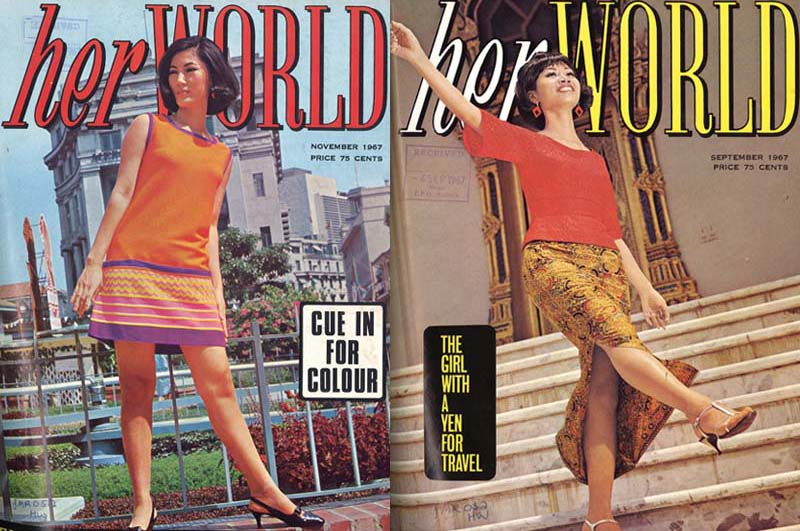 Here are some key trends through the decades:

The 1960s began with modest hemlines that stopped just below the knee. As a reflection of Singapore’s cosmopolitan culture, local designs combined traditional ethnic elements with foreign influences as exemplified in the cheongsam and kebaya with modern or Western twists, or dresses made from sari fabric. The designs usually featured figure-hugging silhouettes, such as puffy skirts with cinched waists.

Upstart British fashion designer Mary Quant made the world sit up with “The Mini” skirt the following year, which saw hemlines raised to an unprecedented high. As hemlines moved upwards, waistlines plunged downwards, with the drop-waist design much in favour then. The head-turning mini hemline was soon accompanied by the emergence of a simple bodice devoid of any form-fitting lines – the classical A-line shift dress (also called a swing dress).

As the controversy over hemlines raged, the height of side-slits in cheongsams also came under scrutiny. As slits crept thigh-high to make the wearer appear sexier, some argued that these high-cut slits were inelegant and in poor taste.

For local fashion, the prevailing style of the late 1960s was clean lines, neat shapes and a trapeze silhouette, with the A-line shift dress being the defining shape of the time and the mini skirt as the phenomenon of the decade. 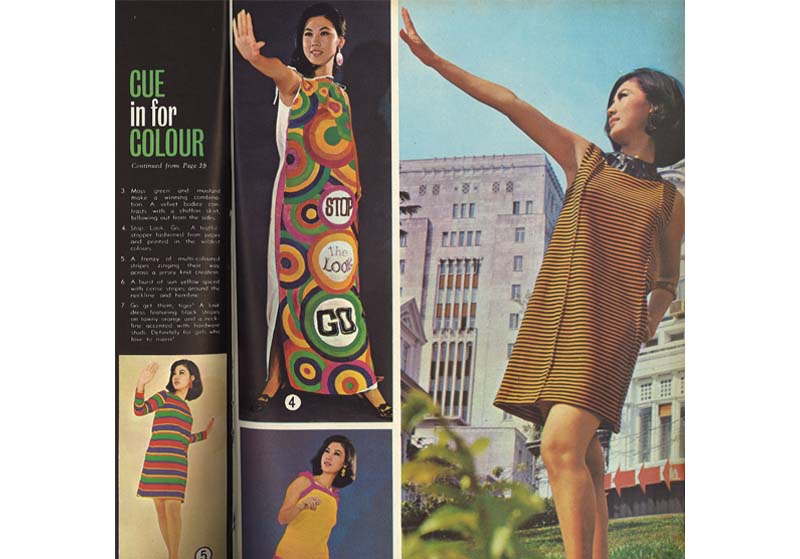 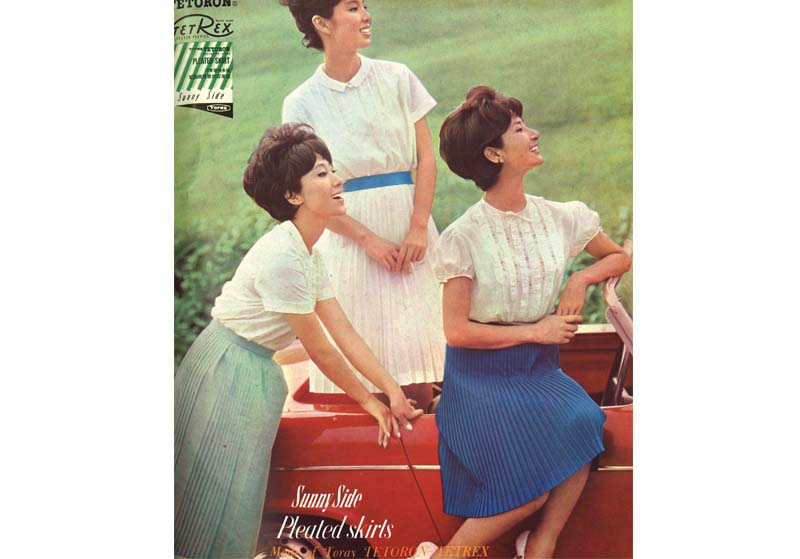 An advertisement for pleated skirts. Her World, April 1964, inside back cover. All rights reserved. Singapore Press Holdings, 2014.

Hot pants burst into the fashion world as the next fashion statement of the 1970s. Hot pants were extremely brief shorts worn under a long shirt or dress buttoned to the waist, revealing the legs beneath.

Around the same time, hemlines went to the other extreme with the maxi dress, a long dress or skirt that reached the ankles. Influenced by the hippie culture that arose in the United States, these dresses came in vibrant floral and geometric prints and were usually made from light materials such as cotton, chiffon and polyester.

The “gypsy” look, which could be created by accessorising with ethnic tunics, capes and kaftans, was also popular during this time. Pleats, ruffles and frills were also favourite trimmings used to embellish garments during this period.

Other defining looks of the decade were bell-bottom trousers and “pantsuits”. Trouser legs began to flare gradually and eventually reached the wide bell-bottom look by the mid-1970s. Thereafter they slowly morphed into straight and wide cuts, before reverting to a narrow-cut silhouette by the early 1980s.

The local fashion scene was extremely vibrant towards the end of the 1970s, with fashion shows held at upscale venues such as Grand Hyatt, Hilton, Holiday Inn, Raffles Hotel and the Mandarin Orchard. In 1979, European fashion houses Louis Vuitton, Gucci and Christian Dior each opened their first boutiques in the city-state. These laid the foundation for Singapore’s fashion world to enter its golden era in the next decade. 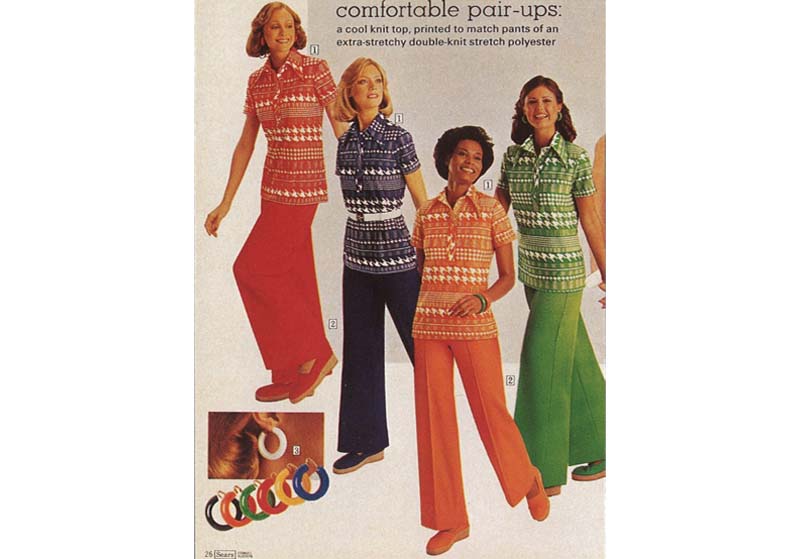 Flared-leg pants, such as bell-bottoms, were styles characteristic of the 1970s. Fashionable Clothing from the Sears Catalogs: mid-1970s, p. 42. All rights reserved, Schiffer Publishing Ltd, Pennsylvania, 2014.

The rise of Japanese fashion designers such as Hanae Mori, Kenzo Takada, Issey Miyake and Kanzai Yamamoto, who had successfully penetrated the European markets with their innovative designs, spurred Singapore to launch an exhibition of local designers’ collections in Paris in 1983.

In the early 1980s, local designer Allan Chai distinguished himself with his clever hand-painted Chinese pictorial appliqués stitched onto Oriental-inspired outfits. Bobby Chng dominated the menswear market for the young and trendy. His sporty look with metallic trimmings injected a fresh approach to men’s clothing.

The recession in the 1980s led to more career-oriented designs as jobs and careers became the main preoccupations of the day. The market for office wear expanded. Designers Esther Tay and Celia Loe created a career-wear clothing line to meet the needs of the career woman. Jacket skirt suits, smart casual and executive suits were among their popular creations.

“Yuppies”, a term coined for young urban professionals in the 1980s, were a new breed of ambition-driven and materialistic young people who presented a niche market for the fashion trade. Designers began to target and create apparel that was in keeping with yuppie lifestyle aspirations and fashion sensibilities. 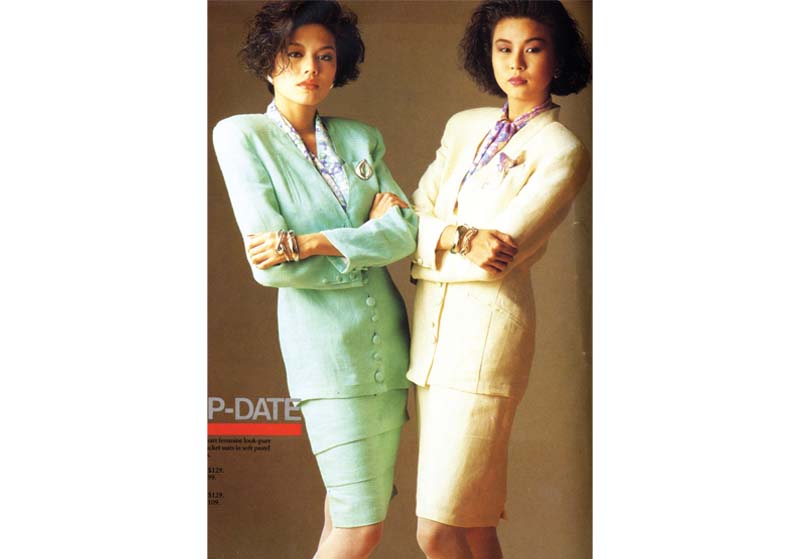 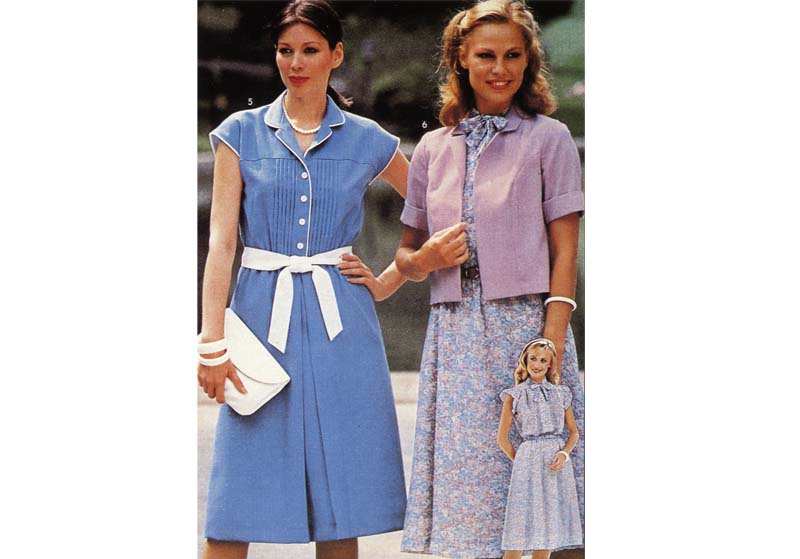 The beginning of the 1990s was a period that was characterised by clean, fuss-free and comfortable and easy-care clothes for fast-paced living. Trends from the 1960s and 1970s, such as miniskirts, bell-bottom pants, tapered blouses with narrow sleeves and arm’s eyes paired with platform shoes, were revived, adapted and updated for the 1990s.

Media and fashion shows played an important role in the fashion industry during this period. Clothing designs had to reflect the lifestyle of the wearer, and clothes were used to project a particular image or the social status of the buyer.

Casual and comfortable clothing began to gain popularity among young working women as, thanks to rising affluence, people began to travel more. At the same time, “casual Fridays” began making its way into offices, allowing workers to dress informally for the office on Fridays. 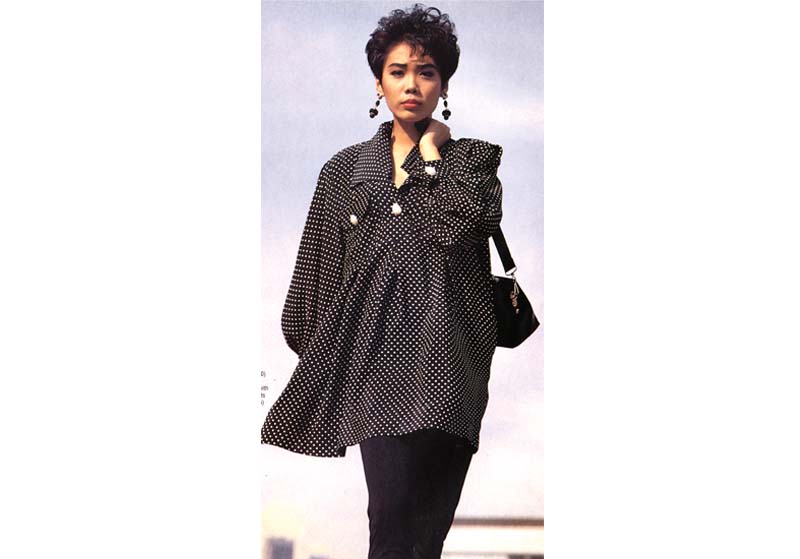 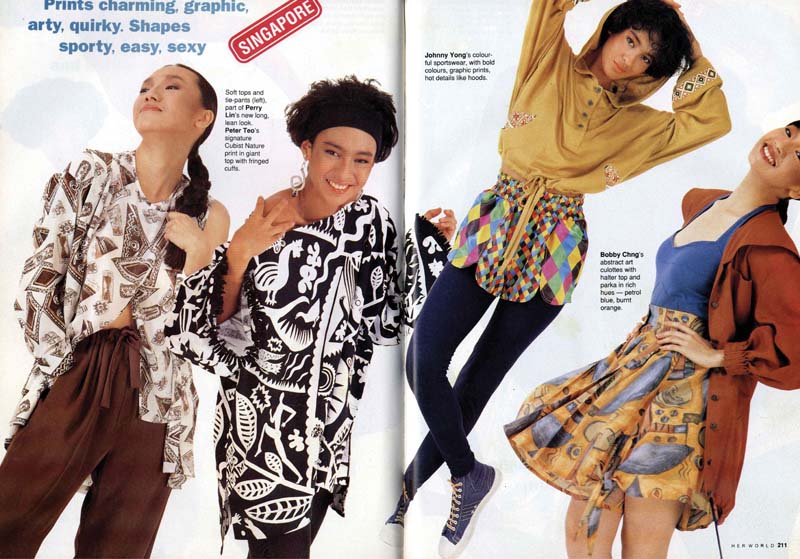 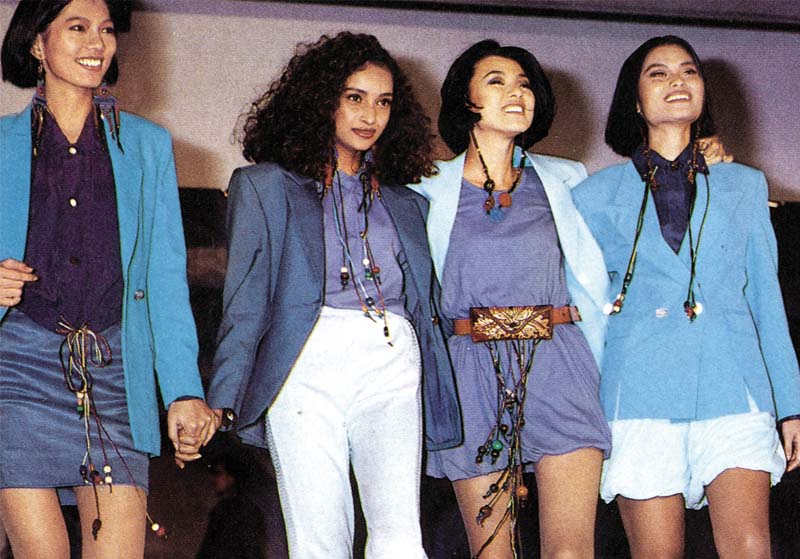 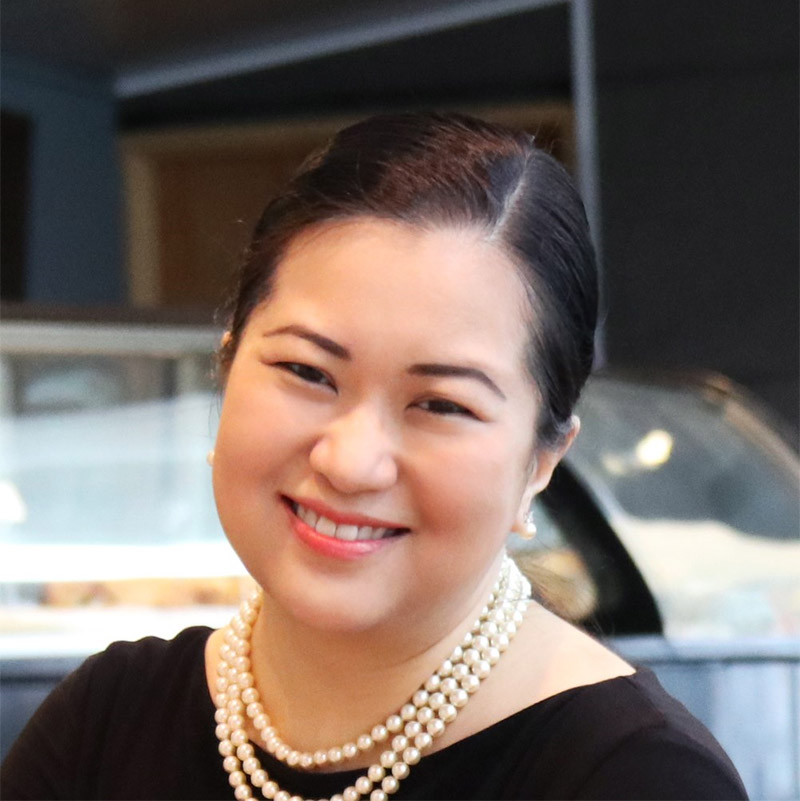 Jessie Yak is a Librarian with the National Library of Singapore. She manages the library’s fashion and Chinese arts collections. She is a graduate of Beijing University and the University of Cambridge. 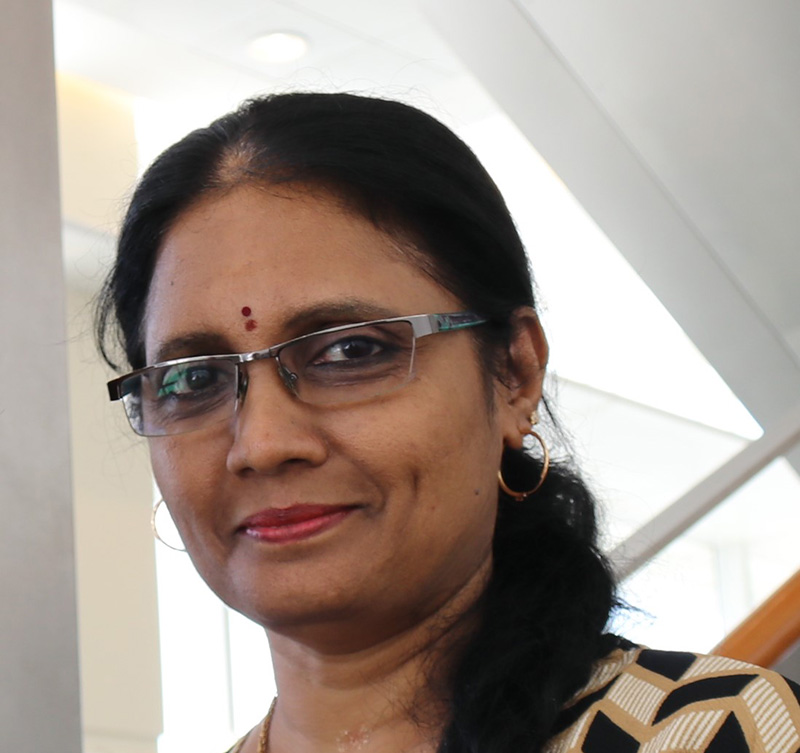 Sundari Balasubramaniam is a Librarian with the National Library of Singapore. Her responsibilities include managing and developing content as well as providing reference and research services. She also manages the library’s Tamil collection.