Azizah, the alluring customer-turned-love-interest of trishaw-rider Amran (played by screen legend P. Ramlee) visits his run-down hut for the first time in Penarek Becha (1955). When Amran bemoans his humble station in life, she delivers a sagely line in return, “Tuhan tidak akan memberi sahaja kalau manusia tidak berusaha (God won’t just help people unless they make an effort).”1 The audience watches with bated breath as this beauty-with-brains helps her humble beau make a success of his life. Azizah (played by the sweetheart of Malay movies, Sa’adiah) vows to help him attend night school. This turns out to be just the kind of push an honest-but-poor trishaw rider needs to scale the rigid social ladder of the time and seek the blessings of her parents. For cinema audiences, the film’s central theme – the rejection of inequality through the pursuit of education – was a timely reminder of the need for self-reliance:2 Malaya was in the midst of agitating for independence from her British colonial administrators.

Penarek Becha (The Trishaw Puller) was a major box office hit when it was released in 1955 and was a watershed film3 for both its actor-director, P. Ramlee – the multi-hyphenate Renaissance Man of the Malay silver screen – as well as the local film industry. The success of this film paved the way for other Malays to direct films that suited the community’s sensibilities and ignited far-reaching changes in the screen image of the modern Malay and his struggle to come to terms with a rapidly changing world.4

The winds of change, as far as post-World War II domestic film production was concerned, had already swept through Singapore with the 1947 release of the first post-war Malay film, Seruan Merdeka (The Call For Freedom),5 produced by S.M. Chisty of Malayan Arts Productions, and directed by the influential Calcutta-born auteur, B.S. Rajhans, who was also the director of the first Malay-language film in Singapore, Laila Majnun (1934).6 Starring Salleh Ghani and Siti Tanjung Perak, Seruan Merdeka focused on how young Malay and Chinese Singaporeans came together to resist the Japanese occupiers. It was a rare screen outing as it was unusual to see both Malay and Chinese actors on the screen. Although the film was a commercial failure due to a lack of cinemas, and consequently, limited exposure, Seruan Merdeka7 marked the start of what was to become the 25-year-long golden age of Malay cinema in Singapore.8

Shortly after World War II, Shaw Brothers reopened their film production studios at 8 Jalan Ampas, which had closed during the Japanese Occupation. In a shrewd business move, Shaw Brothers started Malay Film Productions (MFP) Ltd in order to tailor-make movies for the growing number of Malay film-buffs in Singapore and Malaya, which at the time was the most rapidly expanding regional market.9 Adopting the lucrative, vertically-integrated models of Hollywood studios such as MGM and Paramount, Shaw enjoyed an almost unrivalled monopoly of the Malay film industry. Between 1947 and 1952 alone, the prolific MFP produced 37 feature films, the first of which was B.S. Rajhan’s Singapura Di Waktu Malam (1947, Singapore Night).10

While the Shaws’ pre-World War II Malay films featured bangsawan actors and were helmed by Chinese directors including Hou Yao and Wan Hoi Ling, MFP’s stable of experienced Indian directors brought in from the subcontinent ensured a steady flow of Indian-influenced films with ‘overstylised’ acting as well as song and dance sequences.11 Certain cultural barriers, however, proved difficult to overcome as the direct translation of movie plots, dialogues and style carried over from Indian films caused rifts between foreign and homegrown talents at MFP.12

At this point, Rajhans recognised the need to infuse his crew with fresh blood instead of relying solely on the local traditional bangsawan (Malay opera) performers who had crossed over into the world of moving pictures. Whilst on talent-scouting trips in the Malay Peninsular and Singapore, Rajhans spotted the young musician P. Ramlee and quickly hired the charismatic singer-actor. Ramlee made his screen debut in the 1948 film Chinta (Love), playing the supporting role of a swarthy villain opposite screen siren Siput Sarawak.13 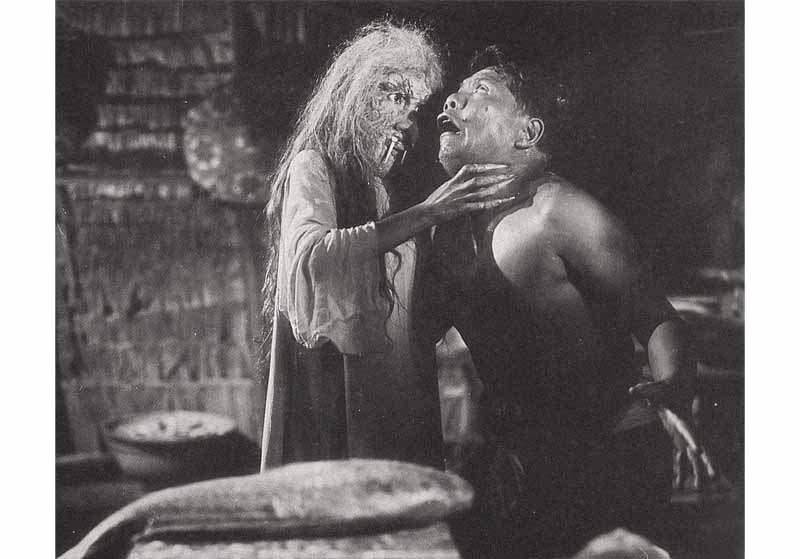 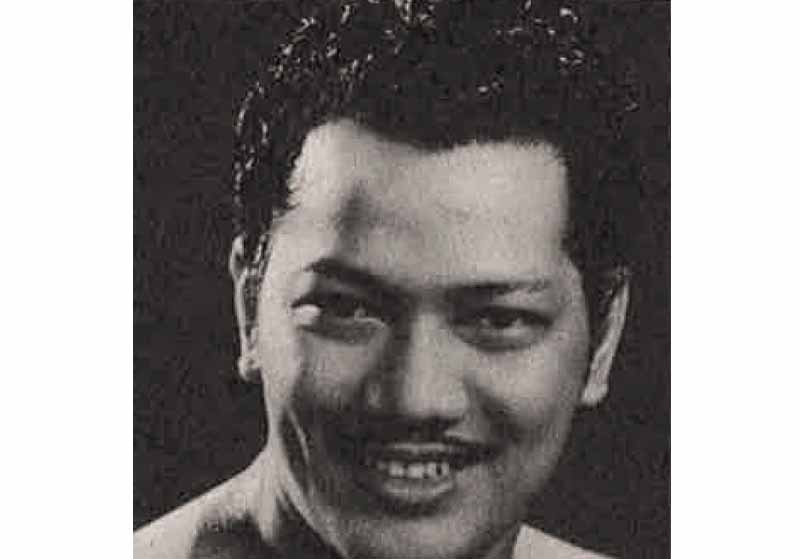 P. Ramlee was an actor-singer who starred in many of Shaw's MFP's films. © 120 Malay Movies, Amir Muhammad, published by Matahari Books, 2010. 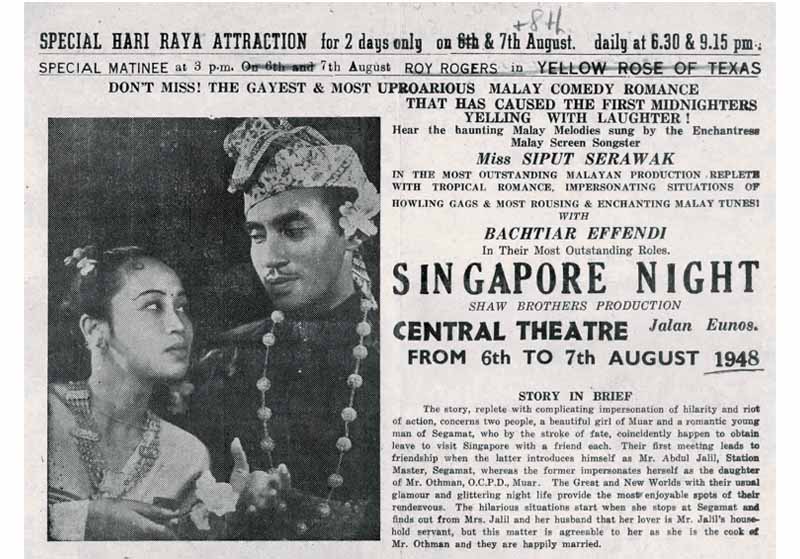 Not to be eclipsed was rival Cathay Organisation’s Cathay-Keris Films with its studios at Jalan Keris in the East Coast area. In 1953, Cathay’s chairman Loke Wan Tho teamed up with Keris Film Productions’ managing director Ho Ah Loke to form the Cathay-Keris Studio. Cathay-Keris was to pose a serious challenge to Shaw Brothers MFP’s dominance in the Malay film industry.14

Ho was a maverick producer who cut his teeth in the industry in 1925; not only did he buy a cinema in Ipoh at the age of 25, he also rode his bicycle to small neighbouring towns to screen his reels of films.15 After a former partnership with Rimau Film Productions had run its course, Ho formed his own company, Keris Film, in 1952. Not long after, Cathay’s Loke collaborated with Ho in the production of Buloh Perindu (Magic Flute), believed to be the first Malay-language film shot in colour and released in 1953 under the Cathay-Keris Films banner.16 Due to the paucity of expertise and limited supply of filmmaking talent, Ho was said to have recruited directors of Indian origin from MFP as these auteurs had the requisite years of experience from working with the Shaw Brothers. Among the talented directors were Dato L. Krishnan, B.N. Rao and K.M. Basker.17

A turning point in the Malay film industry occurred in 1957 when a dispute broke out between the film workers union, PERSAMA (Malayan Artists Union) and executives at Shaw Brothers following the dismissal of five Malay film actors and actresses employed by MFP and agitations for wage increases and better employee prospects.18 A strike soon followed. When negotiations remained at an impasse, Cathay-Keris’ Ho allegedly muscled in on the situation by sending rice supplies and encouraging notes to the strikers in order to lure actors, directors and technicians to his studios where better remuneration and equipment beckoned.19

Following the strikes, Cathay-Keris released one of the most notable cult films in the Malay movie industry, Pontianak (1957), starring the radiant kebaya-queen from Indonesia, Maria Menado. The ghoulish tale of a beauty-turned vampire who could only be killed with a nail driven into her skull was directed by B.N. Rao. The phenomenal success of Pontianak – which spawned the sequel Dendam Pontianak (Pontianak’s Revenge) in the same year and consequently the horror film genre – heralded the arrival of Cathay-Keris as a formidable opponent in the industry.20 Menado, too, rode the crest of her success in the Pontianak films to become Malaya’s first film-star producer with her own company, Maria Menado Productions, rivalling P. Ramlee’s status in the filmmaking sphere.21 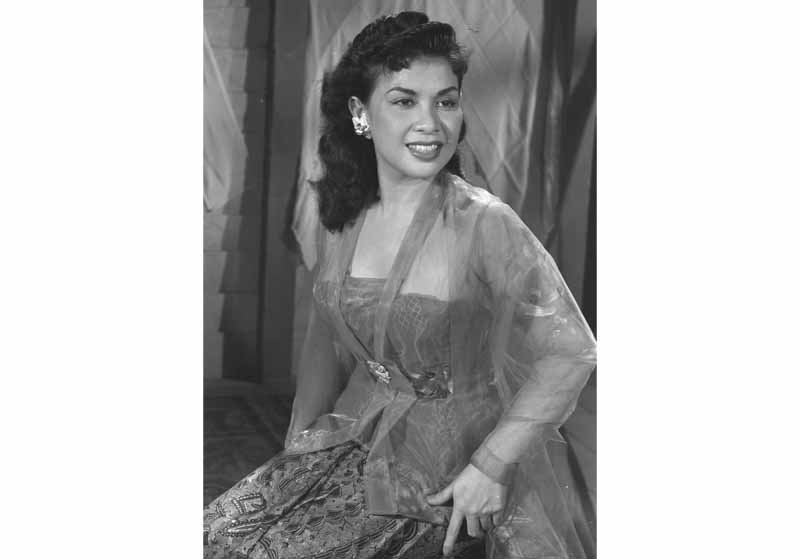 Actress-producer Maria Menado (of the Pontianak movie fame) in 1960. K.F. Wong collection, courtesy of the National Archives of Singapore.

Following the 1957 strike at Shaw Brothers, tensions among the Malay staff and resentment over labour disputes lingered at MFP. In a few years, most of Shaw Brothers’ Malay-language film production had moved to Kuala Lumpur.22 Its one profitable star, P. Ramlee was given the opportunity to make a film, Seniwati (Female Artiste), in Hong Kong but this deal fell through amid fears that such a venture would lack cultural resonance among the Malays and deal a blow to the local film industry.23 With diminished prospects, Ramlee moved to Kuala Lumpur in 1964, which coincided with a series of events leading to the decrease in Shaw Brothers’ Malay film production efforts in Singapore. By 1967, MFP had closed.24

Meanwhile, Cathay-Keris faced stiff competition from television and the loss of the Indonesian cinema-goers’ market due to the Konfrontasi (Confrontation) crisis between 1963 and 1966 that saw armed incursions and bomb attacks by Indonesian forces in Singapore. Cathay-Keris responded by retrenching 45 studio staff in 1965, and a further 17 staff in 1966.25 By 1972, Cathay-Keris had produced its last film, Satu Titik Di-Garisan (A Drop at the Line), marking the end of Malay film production in Singapore.

After Shaw and Cathay shut down their studios in Singapore and moved their operations to Kuala Lumpur, Singapore lost its status as the hub of the Malay film industry. The emergence of television as an alternative medium was one of the key factors that led to the demise of the homegrown tinsel towns along Jalan Ampas and Tampines.26 While marquee names like P. Ramlee tried to gain a foothold in the Malaysian film industry, film talent in Singapore decided to focus their efforts on the small screen. New made-for-TV Malay movies started trickling into the vacuum as demand for entertainment was picked up by Radio and Television Singapore (RTS), which released popular series such as Awang Temberang27 and Sandiwara.28 The void left by the end of the golden age of Malay cinema was also filled by Indonesian Malay-language films with stars such as Brorey Marantika and Dicky Zulkarnain. 29

Meanwhile, in a quirky departure from the past, independent producers made a string of English-language martial-arts-themed films: Ring of Fury (1973), Bionic Boy (1977), They…Call Her Cleopatra Wong (1978) and Dynamite Johnson (1978).30 The latter trilogy, directed by Filipino auteur, Bobby A. Suarez31 drew inspiration from the kungfu mania following Bruce Lee’s phenomenal success and the blaxploitation genre that had become hugely popular in the US.32 In particular, Cleopatra Wong, starring the 19-year-old Singaporean actress Doris Young (a.k.a Marrie Lee) quickly reached cult status and eventually inspired a young Quentin Tarantino, who later referenced the spirited, fly-kicking Interpol agent heroine who could hold her own amongst the most violent thugs and villains in his Kill Bill movies.33

In all, more than 250 Malay-language films were produced in Singapore over the 25-year reign of the golden age of local film, spawning a line-up of celebrity Malay stars in the process. These films have remained in the hearts of fervent fans who occasionally get to watch re-runs on television specials and during film festival screenings. The golden age of Malay cinema was symbolic for a generation of film audiences who had witnessed the transition from an oral storytelling tradition to a dynamic art form on the silver screen. While the study of Malay-language films remains somewhat overshadowed by other Asian cinematic arts, it is heartening to see the revived interest in these films, which are celebrated regularly at film festivals, tribute exhibitions to film-making talent of that era and, more recently, a permanent gallery at the Malay Heritage Centre in Kampong Glam.34

The authors have jointly curated a book display “ The Golden Age of Malay Cinema”, at the Lee Kong Chian Reference Library, Level 8, National Library Building. The display ends on 30 May 2015.

Nor Afidah Bte Abd Rahman is a Senior Librarian with the National Library of Singapore and a regular contributor to BiblioAsia.

Michelle Heng is a Librarian with the National Library of Singapore. She compiled and edited Singapore Word Maps: A Chapbook of Edwin Thumboo’s New and Selected Place Poems (2012), and more recently, Selected Poems of Goh Poh Seng (2014).