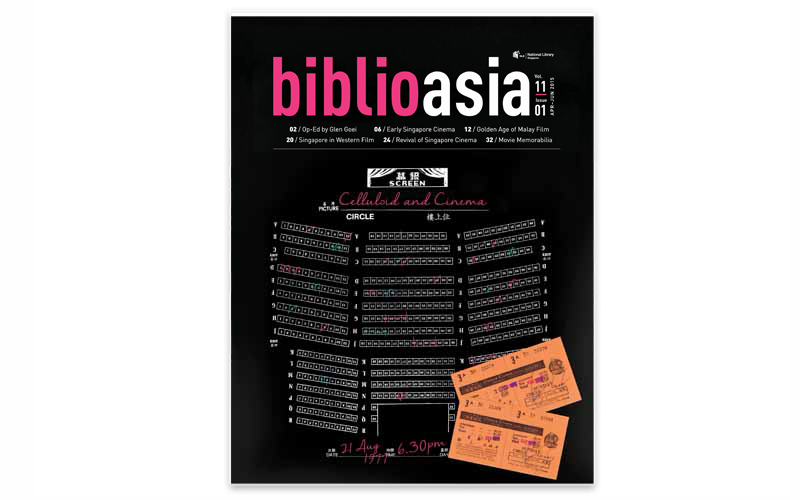 My Leap into Movies
Theatre thespian and film director Glen Goei reflects on his transition from the stage to cinema screen.(PDF)

From Tents to Picture Palaces: Early Singapore Cinema
Few people are aware that Singapore’s cinema history dates back to as early as 1896. Bonny Tan traces its development, from the days of the Magic Lantern projector to the first locally made films.(PDF)

The Golden Age of Malay Cinema: 1947–1972
Few people are aware that Singapore was once the hub for Malay filmmaking in Southeast Asia. Nor Afidah Bte Abd Rahman and Michelle Heng recount its fabled history.(PDF)

Spies, Virgins, Pimps and Hitmen: Singapore Through the Western Lens
Western filmmakers have always had a fascination for Singapore. Ben Slater tells you why. (PDF)

The Revival of Singapore Cinema: 1995–2014
Singapore’s film industry gets a reboot as it enters a new phase of its development. Raphaël Millet explains how this resurgence came about.(PDF)

Culture on Celluloid: Alternative Films in Singapore
Intellectual and art house films have a long history in Singapore but the issues the genre faces have changed little over the years. Gracie Lee charts the challenges of alternative cinema in our city.(PDF)

A Moving Journey: Film, Archiving and Curatorship
As the Asian Film Archive celebrates its 10th anniversary, Karen Chan takes a look back at the genesis of the organisation, the work it does and its plans for the future.(PDF)

Searching for Singapore in Old Maps and Sea Charts
Kwa Chong Guan dissects the history of maps, and tells us how Singapore was perceived and located in early modern European maps of the region.(PDF)

From the Director’s Chair
In candid, off-the-cuff conversations, four young auteurs talk about their upcoming works for the Singapore Memory Project film festival.(PDF)