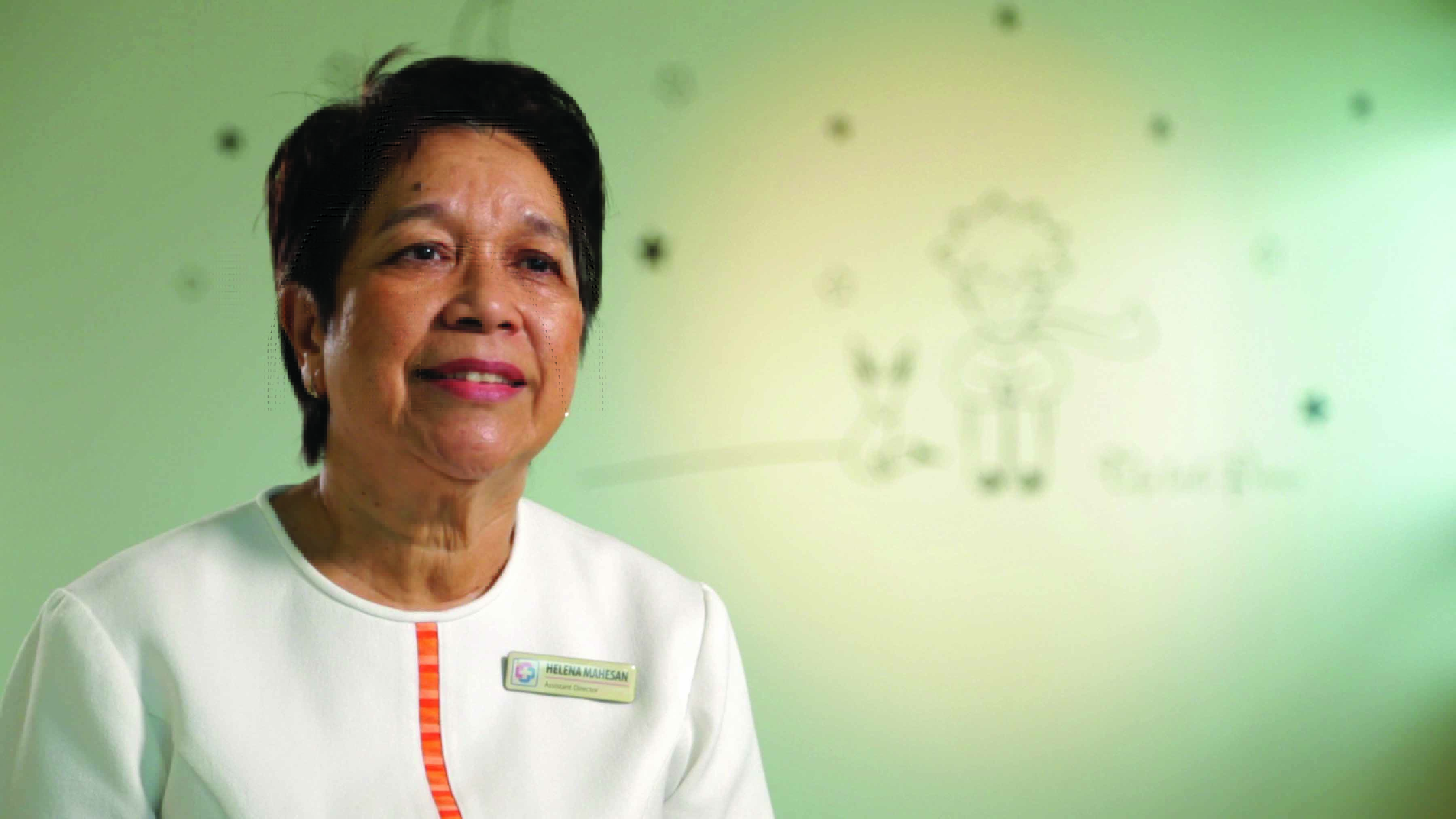 A video still of Helena Maheson. Hers is one of the narratives that will be featured in the form of a video clip.

Struggles and hardship are part of the human condition. On the other hand, triumph in the face of great adversity is much less commonplace, and is often remarkable – especially when the struggle towards success is hard won. Many films celebrate stories of people overcoming unrelenting hardship to achieve great things, often played out in the dramatisation of the protagonists’ suffering and their subsequent vindication.

Real life is much less sensational but the experiences are no less moving. Many people emerge from situations of adversity without necessarily achieving what the world would consider as spectacular or extraordinary. Real life suffering is subtler and less dramatic, and the definition of success is much more nuanced.

The Singapore Memory Project’s upcoming exhibition, “Greatest Gift of a Generation: Life Stories”, celebrates the quiet triumph of overcoming personal adversity. In conceptualising this exhibition, we sought out the generation born before Singapore’s Independence – people who have experienced and witnessed great joy but also great hardship – to share their personal stories.

We did not uncover amazing feats of derring-do or film-worthy triumphs from the interviews. What is more remarkable, however, are the responses and perspectives of these 40 individuals to the hardships they had suffered.

When asked questions such as “Which time of your life did you struggle most?” or “How have your struggles impacted your life?” many of them responded stoically, “What struggles? That’s just life.” Yet their stories paint lives of genuine hardship, protracted years of struggle and an enduring spirit to rise above their situations.

In curating “Life Stories” we were inspired by the perseverance, humility and generosity of spirit shown by this generation of Singaporeans.

“Greatest Gift of a Generation: Life Stories” is a year-long exhibition that opens at the Woodlands Regional Library in late May 2015. The evocative portraits on display are taken by a group of photography majors from the School of Art, Design and Media, Nanyang Technological University. Each portrait showcases the distinctive style of the photographer while capturing the context of the story. Also included in the exhibition are five video clips featuring first-person narratives of selected individuals.

The Singapore Memory Project – an initiative by the National Library Board – is a nationwide movement that was started in 2011 to collect, preserve and provide public access to memories and stories relating to Singapore.

When I was five, I was with my father at home one day. Suddenly, he fell over saying that he needed water and he was in pain. I ran to the kitchen, took a glass of water, and tried to feed him. Of course it spilled all over because he was collapsing. So I ran out to fetch my mother. She was nine months pregnant then, but she ran home, and we took my father to the hospital. Eventually, he died.

I was scared that day when the priest came. My mum spoke to me and my younger brother; she said she had to work, and I had to be cared for in the convent. So that was it, I accepted it and I went. It was fearful for a five-year-old girl to be separated from her mother. But somehow, you grow up very fast.

The training that I have, and the experience, helps me to help other people. I’ve been there; I know and I understand.

Later on I became a nurse. It was while I was attached to the intensive care unit that my loved one was diagnosed with childhood cancer.

He passed on nine months into his diagnosis. I thought at the time that I didn’t want to return to nursing. But the same good friend who had encouraged me to join nursing counselled me and said that I had to move on, and that nursing was a wonderful career I should not give up.

I don’t think I would ever think of anything but being a nurse.

Eventually in 2000 I was made to run the paediatric ward, which included the oncology ward. It was filled with children who had cancer.

Even up to today, if there is a patient with cancer, adult or child, because of my experience, it is easy to say to them “I understand”.

I dropped out of school when I was 11. We were poor and had problems buying uniforms and textbooks. The teachers were fierce towards me as I was dyslexic. I ended up playing truant frequently. As a result, I never learnt to read.

That same year I ran away from home and worked as a child labourer in a plastic factory. I worked from 8am to 10pm every day, with one day’s break a month so that I could bring my salary home. I earned $40 a month – twice the amount my father would have earned back then.

When I was 21, I decided to go into fish farming. When I started, I rented a small plot of land in Hougang. My farm’s output was small, so I had to work as a butcher and an insect catcher to continue with my passion for fish rearing.

When the government reclaimed the land used by my fish farm, the Singapore Land Authority (SLA) compensated me a few thousand dollars.

I remember I had to collect the cheque from the SLA office in Shenton Way. When I arrived I was desperate to find a toilet but could not find one as I could not read the signs. After collecting the cheque I spent hours looking for my car, again because I was illiterate.

This incident hit me very hard. I felt like an alien in my own country.

I thought, “I’m young and supposed to be a pillar of society, but there I am, unable to read a simple thing like a street sign!”

From then on, I strove to learn all the words I came across. I started with novels, but moved on to Chinese history books to learn more rare and difficult words. I also read the subtitles on TV programmes to learn new words.

I have been through a lot of difficulties in life, especially challenges in fish farming, but I do not give up easily. I never felt life was hard as I began with nothing. As long as one does not give up easily, one can overcome anything.

My mother passed away when I was seven. At the time, my father was running a coffee shop, and my third sister was helping him.

I remember during the Malayan Emergency we lived in Johor Bahru and I was in primary three. The Malayan Communist Party was creating havoc; they were very ruthless back then. One night, while having dinner with my family, three men rushed in and shot my sister point blank.

I witnessed my sister being shot three times in her head. She was 21, and for some reason the Communist Party thought she was a spy.

I can never forget that scene and I have hated them ever since.

It was quite common for such things to happen then. Many families were torn apart, like mine. We drifted from one place to another.

When I was 13, I came to Singapore to look for work. I remembered I could only afford a loaf of bread which cost 10 cents then, and I would have that with tap water every day for two months. I finally found a job serving coffee in a Hainanese coffee shop. They provided me with food and lodging, and I was paid more than $10 a month.

Later, I went to work at a worksite building – the Ulu Tiram army camp in Johor Bahru. In those days, we would have to manually load or unload the soil, sand, or wood. It was physically exhausting. I did this for a few years, travelling in and out of Singapore every day.

In 1957, I applied for Singapore citizenship; from then on I moved from job to job to make a living. I was a motorcycle repairman, a cleaner, and when jobs were scarce in Singapore in the 1960s, I worked as a waiter, and even as a timber logger in Terengganu (Malaysia).

I learnt to operate a crane while working at a shipyard in Jurong. I was soon promoted to a foreman in 1978. We worked 44 hours a week and would even be paid overtime if we exceeded them! There were also other benefits my previous jobs did not afford me, such as annual and medical leave.

I retired in 2000 and nowadays I volunteer twice a week at the Resident Committee’s karaoke as a karaoke jockey; I love to sing. I also help the folks at the elderly centre nearby with their outings. I even jog for 30 minutes with my wife every morning to keep fit! Although you may think I’ve had a hard life, I’ve never dwelled on the past. It’s best just to live life to the fullest. You only live once right?

Georgina Wong is an Associate with the Exhibitions and Curation department at the National Library of Singapore. She is the curator of the exhibition “Greatest Gift of a Generation: Life Stories” – to be launched at the Woodlands Regional Library in late May 2015.