First Issues: Publications from the Past 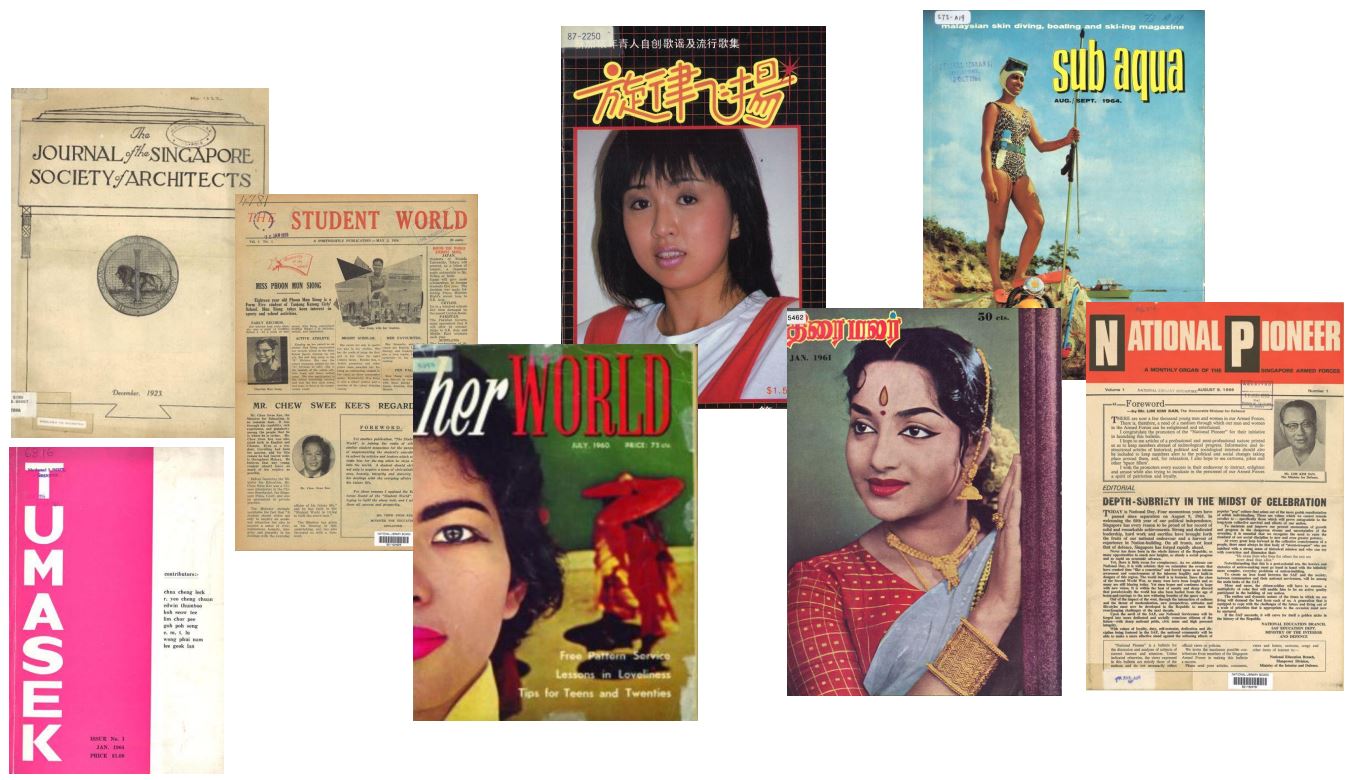 Inaugural or first issues of publications – whether lifestyle magazines, trade publications or scholarly journals – are sometimes much anticipated by readers because of the hype and publicity drummed up in the lead-up to their launch.

First issues of famous and iconic magazines, such as Life and National Geographic, have become highly sought-after collectors’ items, with some titles fetching high prices on eBay. Much time and expense are invested in inaugural issues as they can make or break the publication.

First impressions do count in the publishing business. If the cover is dull, and the contents pedestrian and do not resonate with the intended audience, there is a good chance the publication will not last beyond the first year.

While editors often try and anticipate readers’ tastes when deciding on the contents, some have firm personal convictions about what is right (or wrong) for their readership.1 Editorials – either in the form of a lead article or an introductory note from the editor-in-chief or publisher – are usually worth more than a cursory read.

In the first issue of The Food Paper launched in January 1987, its editor, well-known food critic Violet Oon, claimed that her culinary magazine “will excite, titillate and amuse” its readers. Published in a newspaper format, it was pitched as an “affordable” publication for food connoisseurs looking to experience “love at first bite”.2

The editor of literary magazine Tumasek had loftier ambitions, asserting that “at the inception of a magazine, it is necessary to promulgate one’s intentions and aspirations…, and it is fitting that the editorial of our first number should be devoted to this end”.3

Published with a discerning audience in mind, the editor of Folk Scene Singapore aimed “to present folk music in its fullest spectrum”, adding that if readers “find our interpretation controversial, in which case we shall be pleased, as this magazine intends to be controversial on the subject of music”.4

Pages from the Past

First-issue publications evoke memories of people, places and events from times past. The tabloid format was the norm for several early student and community-focused publications, including The Student Times (1960), Students’ Digest Illustrated (1967) and Busway (1975). There were also relatively more B4-size publications back then, such as The Journal of the Singapore Society of Architects (1923), Singapore Illustrated Weekly (1947), Her World (1960), V.I.P. Magazine: The Prestige Magazine (1966), The Travellers’ Palm (1967) and National Pioneer (1969). Black-and-white pages featured more prominently as colour printing was very costly in those days.

Many of these old magazines have either ceased publication, changed names or acquired new publishers. Sustaining a publication is often more challenging than publishing and launching a new one, and we applaud those that have stood the test of time. Although quite different in contents, style and readership, National Pioneer, forerunner of today’s Pioneer magazine of the Singapore Armed Forces, and Her World, Singapore’s oldest women’s magazine, have survived to this day.

Featured in this essay are just a sampling of titles from a collection of about 700 first-issue publications – from 1923 to 1987 – available in the Legal Deposit Collection of the National Library, Singapore. The titles run the gamut from light-hearted fare, such as fashion, entertainment, art, music, sports and food, to more serious reading like architecture, building and construction, business and education.

The Journal of the Singapore Society of Architects (December 1923) 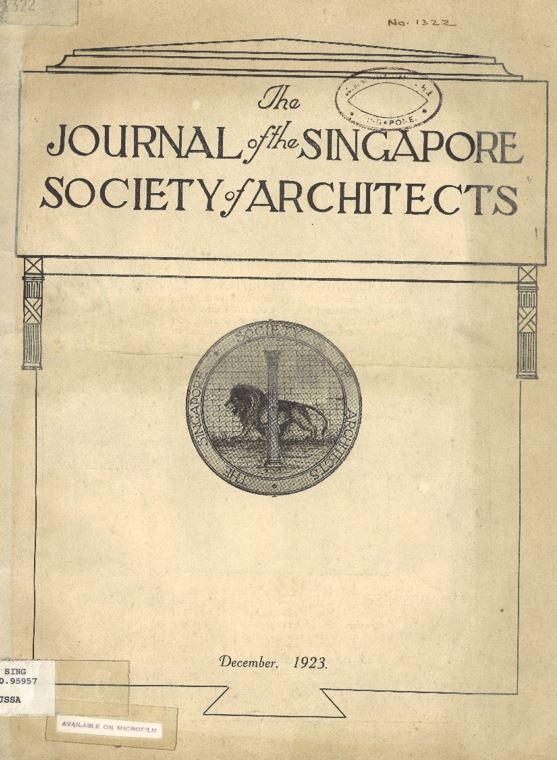 This journal of the Singapore Society of Architects, the precursor of the Singapore Institute of Architects, was launched the same time the society was established in 1923 with 11 founding members, one of whom was the municipal architect S. Douglas Meadows. The society aimed to foster the growing interest in architecture in Singapore after World War I. According to Meadows who became the first president of the society, “to design in beauty and build in strength should be the aim of the architect”.5 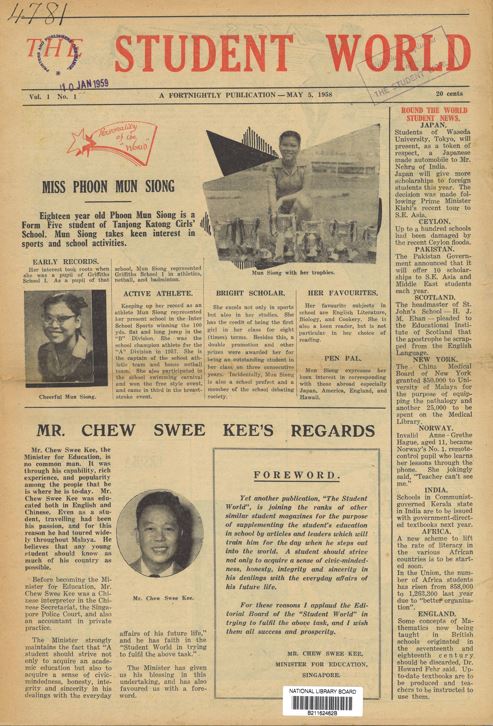 According to the Foreword in the inaugural issue published on 5 May 1958, the magazine aimed to supplement students’ education in school with articles that will equip them with skills for the real world. 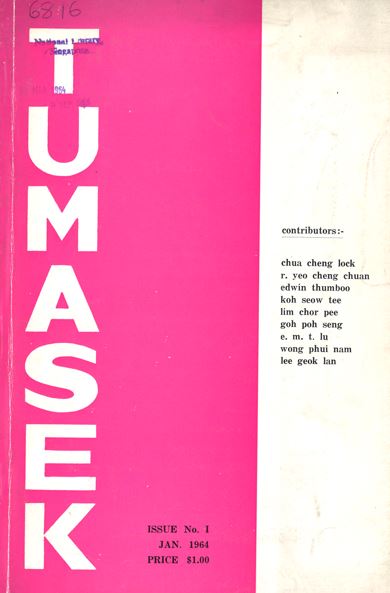 Founded by award-winning writer and poet Goh Poh Seng, the inaugural issue of this literary journal featured Goh’s poem, “On Looking at the Moon and Thinking”, and novel If We Dream Too Long. The latter is considered the first local English novel and won the National Book Development Council of Singapore’s Fiction Book Award in 1976. 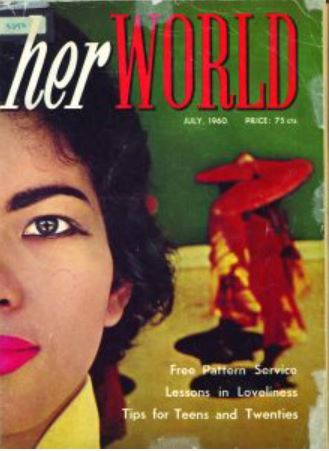 Launched in July 1960, Her World is the first English-language women’s magazine published in Singapore and the longest-running to date. Local model Nancy Koh, with half her face artistically cropped out, was the first cover girl. According to the editor, the cover “suggest[s] all the mystery of the East”.6 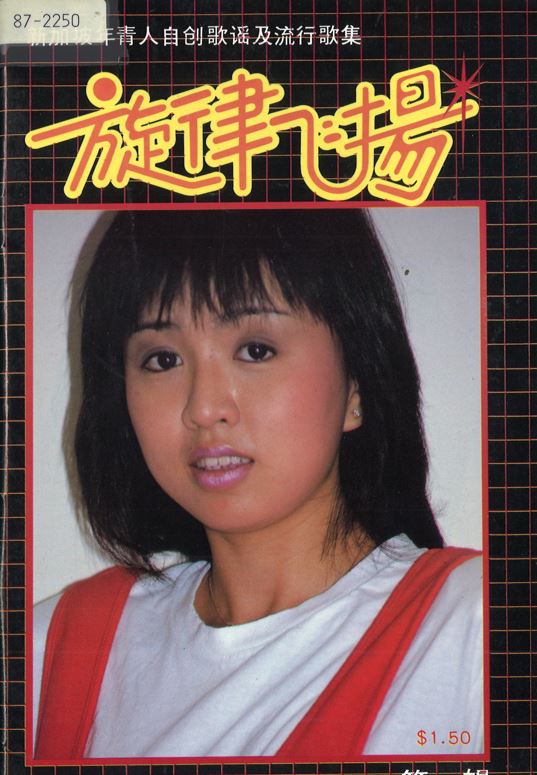 When xinyao (新谣), a genre of Mandarin songs unique to Singapore, was making waves in the local music industry in the 1980s, 旋律飞扬 (Xuan Lü Fei Yang) was published to showcase new as well as established xinyao singers and their songs. Featured on the cover of the inaugural issue is Yan Liming, one of Singapore’s pioneer xinyao singers and affectionately known then as “big sister” among xinyao singers. 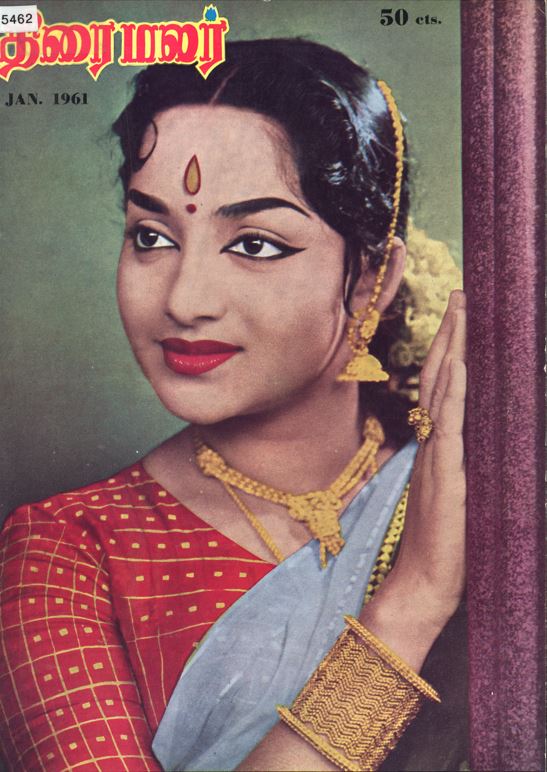 This was one of the earliest Tamil movie magazines in Singapore. It was targeted at film fans with features on Tamil movies, the latest news on famous film stars and scenes from popular movies. To reach out to non-Tamil speaking audiences, the magazine also published articles in English that showcased popular Hindi and other movies. 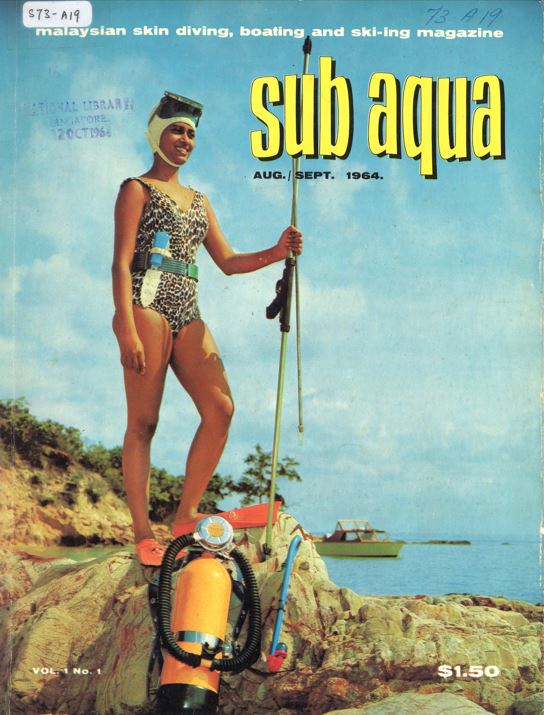 Touted as Malaysia’s skin diving, boating and skiing magazine, the publication was aimed at watersports and boating enthusiasts. This target audience was likely small as the people who could indulge in such activities in 1960s Singapore were probably from privileged backgrounds. 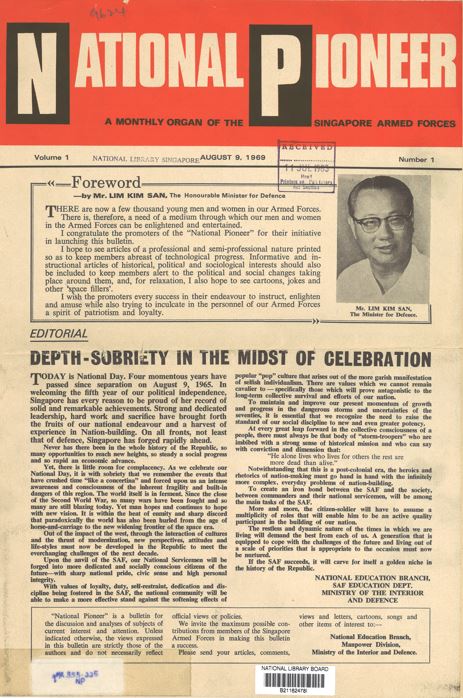 Shown here is the first issue of National Pioneer – the precursor of Pioneer magazine – launched in August 1969 by then Ministry of Interior and Defence. Pioneer, which is published by the Singapore Armed Forces, keeps servicemen abreast of events and developments in the armed forces, and includes topics such as entertainment, travel, and health and fitness. 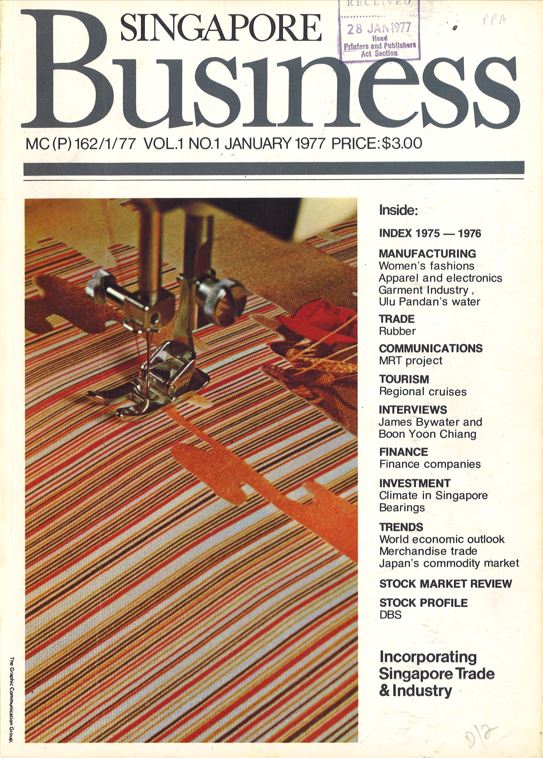 First published in January 1977, the magazine covered a wide array of topics on the business landscape in Singapore. A feature article in the inaugural issue reported that the only way to ease traffic congestion in Singapore is to build a mass rapid transit system. Already, more than 40 years ago, the city was suffering from a problem of too many vehicles. 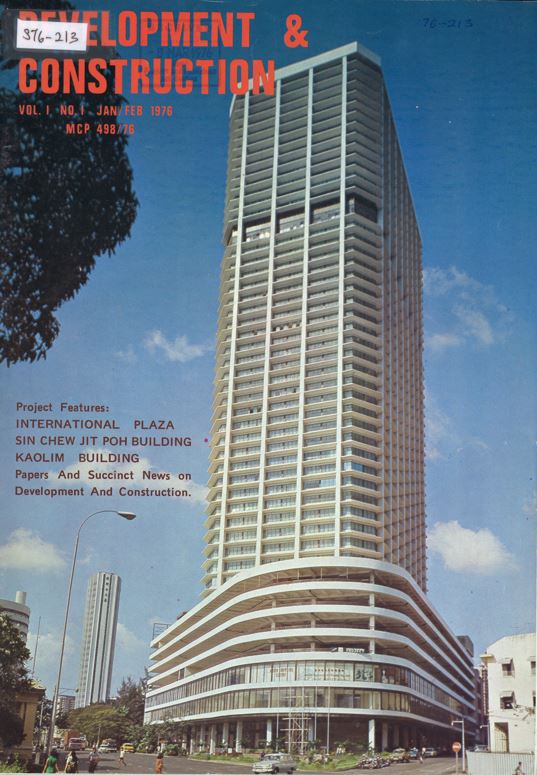 Targeted at professionals in the building and construction industry, the 1976 inaugural issue of this trade publication included a special feature on the 50-storey International Plaza at Anson Road. This is one of Singapore’s first mixed-use developments, comprising both residential and commercial units. The building – at a height of 190 metres – was one of the three tallest in Singapore at the time. 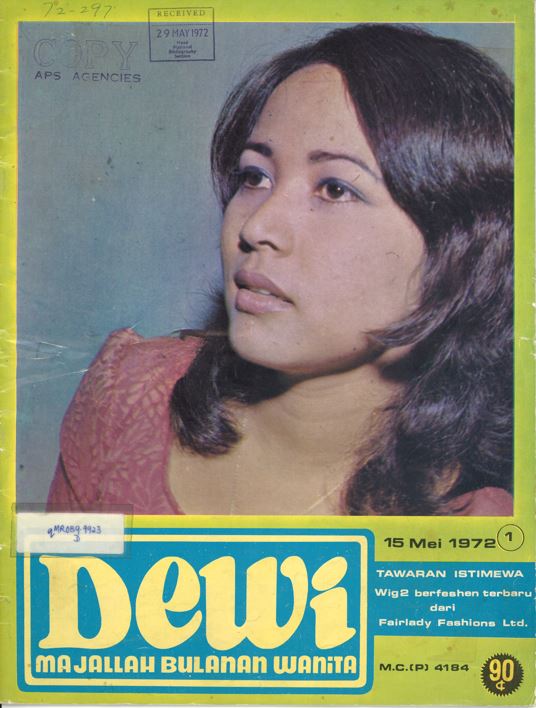 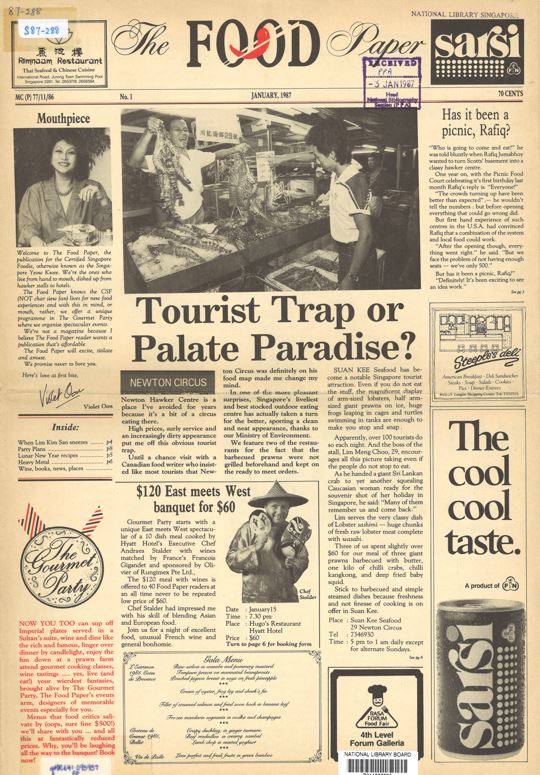 One of the statutory functions of the National Library Board Act is Legal Deposit. Under the act, all publishers, commercial or otherwise, are required by law to deposit two copies of every work published in Singapore with the National Library within four weeks of its publication. The Legal Deposit function ensures that Singapore’s published heritage is preserved for future generations. Legal Deposit also acts as a repository for published materials, providing exposure via the online catalogue, PublicationSG. For more information, please visit www.nlb.gov.sg/Deposit. 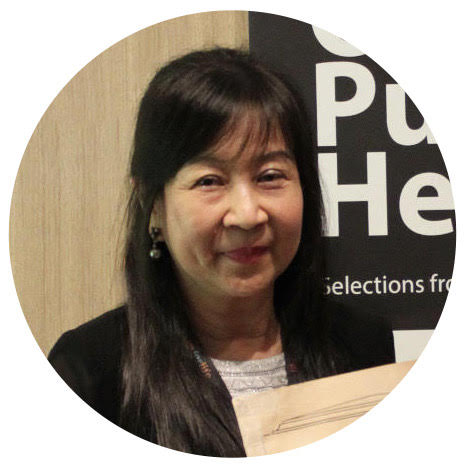 Barbara Quek is a Senior Librarian with the National Library, Singapore. She is currently with the Advocacy & Statutory Function group that oversees the compliance of Legal Deposit in Singapore.
Back to Issue