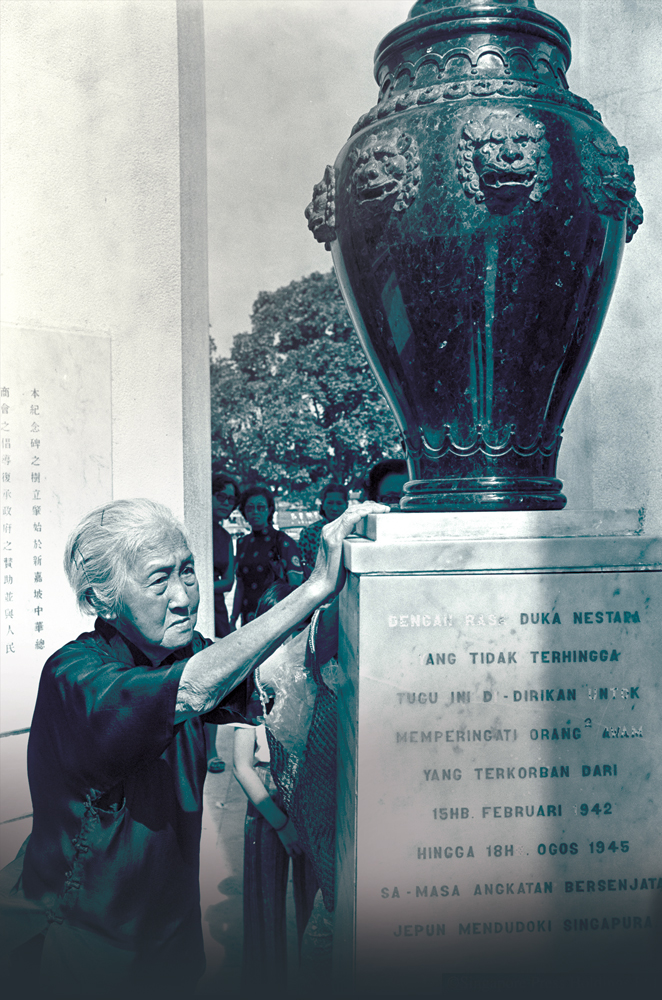 80-year-old Madam Ng Kuai Chee leaning against an urn at the Civilian War Memorial on Beach Road on 15 February 1975, on the occasion of the 33rd anniversary of the fall of Singapore on 15 February 1942. Her late husband Dr Hum Wai was killed by the Japanese. Source: The Straits Times © Singapore Press Holdings Limited. Reprinted with permission.

At a Singapore Writers Festival panel in 2018, the eminent historian Wang Gungwu was asked: “What is the one thing that keeps you awake at night?” He replied without hesitation: “The drums of war.”

Born in 1930 in Surabaya, Indonesia, Wang grew up in Ipoh and was a teenager when the Japanese invaded Malaya. In his memoir Home is Not Here, he looks back to 1948 and recalls: “That stage of my life was… linked to war to an unexpected degree, so much so that I almost viewed war as normal.”1

World War II had ended three years earlier and the civil war in China2 was headed towards a communist victory. Wars of independence were raging in Indonesia and Vietnam, and a state of emergency3 had just been declared in Malaya and Singapore.

Born in the mid-1950s, I see myself as part of an intermediate generation – in between those who had personally experienced war and those living in an era of relative peace. On many occasions, I’ve heard my parents and older relatives recount their lives during the Japanese Occupation of Singapore (1942–45). Their stories of deprivation, fear, anxiety and humiliation have shaped some of my lifelong habits. For example, I am loath to end a meal with even a grain of rice remaining on my plate, and I would be deeply troubled by arbitrary acts of violence against the innocent and the helpless.

Such first-hand accounts are fast disappearing with the passing of the war generation. Younger generations are left with only textbooks, archival materials, museum exhibits and media reports to learn about the war.

But, today, living in an era of relative peace, what are the stakes in remembering an increasingly distant past and understanding the experiences of mass violence inflicted upon the innocent?

Making Sense of an Unresolved Past

As I read more widely and deeply, I came to realise how woefully ignorant my contemporaries and I were about the mass violence that unfolded in neighbouring countries – the Vietnam War,4 the communist purge in Indonesia,5 and the Cambodian genocide.6

It was as if World War II had cast a long and dark shadow over the ensuing decades, its unprecedented scale and degree of inhumaneness giving licence to new and even more deplorable acts of violence. Each case of massive human tragedy provokes endless soul-searching and unresolved questions – many of which echo those that have repeatedly been asked about the Holocaust in Europe.

Why did ordinary men commit extraordinary evil – killing, maiming, and terrorising innocent people? What were the perpetrators thinking? In following orders, were they thinking at all? Did the civilian populations of the aggressor country support these acts of violence? Did they silently acquiesce to their leaders? Should they – could they – have resisted in any way?

Japan’s aggression against its Asian neighbours and across the Asia-Pacific region between 1931 and 1945 is a prime example of an unresolved past. Although some attempts have been made over the decades at acknowledging, apologising and atoning for the country’s wartime record, they never seem to do sufficient justice to the scale and scope of atrocities suffered by untold millions.

In particular, the questions of forgiveness appear to be in limbo: who asks for forgiveness and from whom, and under what conditions might forgiveness be asked for and given? It is far from clear that the perpetrators of war crimes have properly accounted for their wrongdoing – both to the dead and to surviving victims.

The injunction “never again” is often invoked in reflections on the Holocaust. It is a key message in the work of Elie Wiesel, the recipient of the Nobel Peace Prize in 1986. Wiesel, who survived the Holocaust but lost family members in the gas chambers of Auschwitz, said: “I swore never to be silent whenever and wherever human beings endure suffering and humiliation. We must always take sides. Neutrality helps the oppressor, never the victim. Silence encourages the tormentor, never the tormented. Sometimes we must interfere.”7

What is the relationship between memory and conscience? For perpetrators and their descendants, feelings of guilt and shame are invariably bound up with avoidance and evasion about what happened in the past, in effect suppressing or erasing memories of war.

For victims and their descendants, the recollection of trauma and suffering can be accompanied by hatred and resentment – to the point that they hold all members of the aggressor country, including the unborn at the time of war, as morally complicit and equally responsible for the atrocities committed. This, in effect, imposes a collective guilt on an entire population, including innocent civilians and those who had resisted, who, ironically, also became victims of the war – as in the case of the atomic bombings of Hiroshima and Nagasaki.8

Given the complexities in the recollection of traumatic events, there is sometimes a tendency to speak of “putting the past behind us” and of the need to “move on” and not be “weighed down” by painful memories. Yes, we cannot bring back the dead. The chances for a proper reconciliation between surviving perpetrators and victims, too, diminish by the day. Nevertheless, do their descendants have a duty to remember, a moral obligation to bear the burden of the past in a meaningful way?

An understanding of the causes, costs and consequences of mass violence should accompany the act of remembering the past. In so doing, we engage in a process of examining why people do what they do in the face of extreme conditions, not least because they feel powerless to resist the workings of an entire war machinery.

The brutality that occurred during the Japanese Occupation, for example, ranged from arbitrary everyday acts of violence, from soldiers who randomly slapped and kicked civilians to the systematic and cold-blooded “Sook Ching” massacre9 that took place in the first 12 days of the Occupation, during which thousands of innocent Chinese men were rounded up and summarily executed.

Among the victims, war brings to the surface not only acts of moral courage, but also the worst of human traits. During the Occupation, there were many reported cases of civilians collaborating with the Kempeitai (the Japanese secret police), profiting from the black market and hoarding rations for themselves. In his memoir When Singapore was Syonan-to, Low Ngiong Ing lamented the “general coarsening of conscience” under wartime conditions. He wrote, “More and more we came to repudiate the claims men had on us: we refused to consider ourselves our brothers’ keepers. It was each man for himself and the devil take the hindmost.”10

War can be said to be the ultimate condition that distorts human behaviour and strips human beings of agency, dignity and empathy. But war is man-made and not unavoidable, and is neither normal nor inevitable in human life.

Today, war memories can be drawn into nationalist discourses and, in turn, deepen animosity and create tension between countries. To remember, however, is not only to acknowledge the violence that was inflicted and the suffering that was experienced. It is also a conscious effort to understand the human potential for both good and evil and, as Wiesel exhorts, to take sides, to speak on behalf of the victims, and to insist: “Never again.”

Kwok Kian Woon is a Professor of Sociology and Associate Provost (Student Life) at the Nanyang Technological University. His teaching and research interests relate to the historical and comparative understanding of modern social transformation. He was Chairman of the National Archives Board from 1999 to 2005.
Back to Issue