In one image, a man is pulling a rickshaw outside the Thian Hock Keng Temple on Telok Ayer Street. In another, Malay sailboats (or kolek) race at the harbour on New Year’s Day. In a third photograph, a family poses for a portrait in front of the National Theatre on River Valley Road. (Left) A family posing outside the National Theatre, 1965. Designed by local architect Alfred H.K. Wong, the National Theatre was built to commemorate Singapore’s attainment of self-government in 1959. The theatre was situated at the corner of Clemenceau Avenue and River Valley Road. It was closed in 1984 and subsequently demolished to make way for the Central Expressway. Donated by Chang Wei Jie Jerroy, PictureSG, National Library, Singapore. (Right) Scene of the New Year Sea Sports, 1939. This was an annual regatta that took place in the harbour, off Collyer Quay. The Supreme Court building and Municipal Building can be seen in the background. Edwin A. Brown Collection, PictureSG, National Library, Singapore.

All these images capture scenes of Singapore that no longer exist. The Thian Hock Keng Temple photo dates to the 1890s, hence the rickshaws. These days, kolek no longer race in the waters off Collyer Quay on New Year’s Day. And while the National Theatre is certainly Instagram-worthy, that building was demolished in 1986.

Photographs like these are why the National Library’s online PictureSG Collection is so valuable. Consisting of more than 35,000 digitised and “born-digital” (images originally shot in digital format) photographs, PictureSG allows anyone with an internet connection to explore Singapore’s history from the 19th century to modern times.

PictureSG exists because a key function of the National Library is to collect, preserve and make available the published and documentary heritage of the nation. To this end, the National Library has been acquiring, organising and digitising all manner of Singapore-related content, including monographs,1 newspapers,2 music recordings3 and photographs. Over the years, the library has created online platforms to facilitate the search and discovery of the library’s wide array of materials by format. For images and photographs, that platform is PictureSG.

Some of the oldest works in the National Library’s photograph collection were taken by early commercial photography studios – such as Sachtler & Co. and G.R. Lambert & Co. – that operated in Singapore in the 19th and early 20th centuries. These studios produced picturesque scenes and portraits of people that became popular tourist souvenirs at the time. Today, the prints serve as an invaluable source of visual documentation on early Singapore.4

Other than the works of professional photo studios, the collection also includes rare photographs from the personal collections of former European residents of Singapore. These provide another perspective on life during the colonial period.

One such collection belonged to Percy Reginald Hill (1888–1950). In 2007, his daughter Mrs Eleanor O’Hara offered the National Library her father’s collection of 60 glass slides (images printed on glass) featuring scenes of Singapore and Malaya in the early 20th century. Hill was a chartered accountant who worked for the accounting firm Evatt & Company in Singapore and Kuala Lumpur between 1906 and 1919.

A keen photographer, Hill spent his free time documenting everyday life in Malaya, including people, rubber plantations, coastal and riverine settlements, temples, tropical fruits, and street and market scenes. He apparently handcoloured some of the slides himself.5

A year later, another major donation was made by the family of Edwin A. Brown (1878–1955). The Edwin A. Brown Collection comprises some 170 photographic prints of Singapore mainly taken in the 1920s and 30s. The photographs reflect the colourful civic and cultural life of pre-war Singapore in which Brown, a businessman, participated.

Highlights of this collection include photographs of the Prince of Wales’ visit in 1922; the opening of Kallang Airport in 1937; a performance of The Pirates of Penzance at the Victoria Theatre in 1937; the opening of the King George VI Graving Dock in 1938; various scouting activities and the annual New Year’s Day regatta at Collyer Quay in the 1930s.

The majority of photographs in the National Library’s collection date to the first three decades of Singapore’s independence and were donated by prominent individuals, professional photographers as well as the general public. These images document the changing physical and social landscape as the country underwent rapid development and urbanisation.

Among the photographs of this period are the library’s own collection of prints that capture the history of library services in Singapore, including the former National Library building on Stamford Road,6 the first mobile library service started in 19607 and the first branch library in Queenstown,8 which was officially opened by founding Prime Minister Lee Kuan Yew in 1970.

The National Library also receives photographs as part of larger donations, which can include books, maps, photographers’ notes, manuscripts and other materials that provide valuable supporting information. A case in point is the donation in 2009 by the family of Lee Kip Lin (1925–2011) of some 17,000 photographic materials, making up the single largest collection of images in PictureSG. In addition to rare prints by G.R. Lambert & Co. and photos of modern Singapore personally taken by Lee himself, the Lee Kip Lin Collection also includes monographs and maps of Singapore and Southeast Asia.

An advocate of conservation, Lee undertook extensive photographic surveys to support his cause. Between 1965 and 1995, Lee traversed the island documenting streets, buildings and places in a methodical fashion, and where possible, from exterior to interior views. The outcome of this painstaking endeavour is a meticulous visual record of Singapore’s architectural heritage and spatial transformation over a 30-year period. Most of the photographs were shot on black-and-white film, which rendered architectural details with greater contrast and clarity compared to colour film.10

In addition to the quality of the photographs, the value of the Lee Kip Lin Collection lies in its diverse subject matter. The photos were taken in the city centre as well as outlying areas, and showcase a variety of building types such as bungalows, shophouses, markets, flats, schools and places of worship. Studied together with maps, building plans and other historical records in the National Library’s collections, the photographs allow the viewer to reconstruct the past through places and spaces in Singapore that have been altered beyond recognition or no longer exist today. 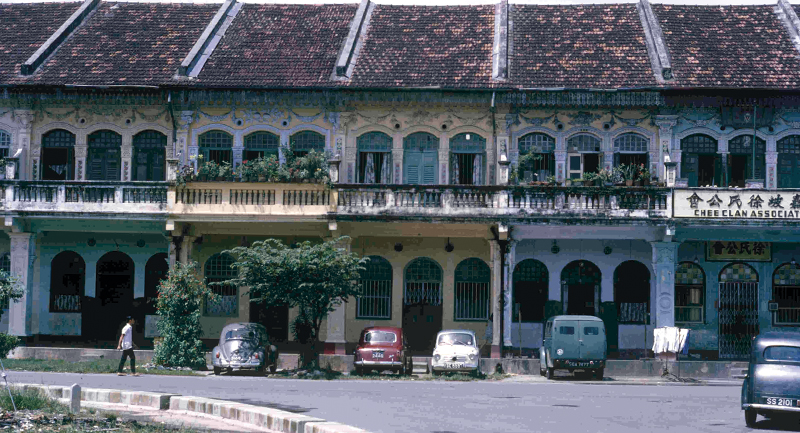 A row of two-storey shophouses on Kitchener Road, 1966. These dwellings have typical Peranakan features such as the half-length swinging doors (pintu pagar) at the entrance. Lee Kip Lin Collection, PictureSG, National Library, Singapore.

Another collection of photographs that showcase Singapore’s architecture was donated in 2007 by the family of Kouo Shang-Wei (1924–88). The Kouo Shang-Wei Collection comprises over 6,700 photographic prints, slides and negatives.11 Kouo was a talented photographer and a pioneer in the art photography scene of Singapore and Malaya. His contemporaries include well-known names such as K.F. Wong,12 Yip Cheong Fun13 and Lee Lim.

Kouo captured streetscapes and panoramic views of the Singapore River, the Marina Bay area and Raffles Place from the 1950s to the 80s. Highlights of the collection are photographs of buildings that have become enduring downtown icons, such as OCBC Centre (Kouo was commissioned to photograph the construction and opening of this building). Designed by renowned architect I.M. Pei, the 52-storey building was the tallest in Southeast Asia when it was completed in 1976. 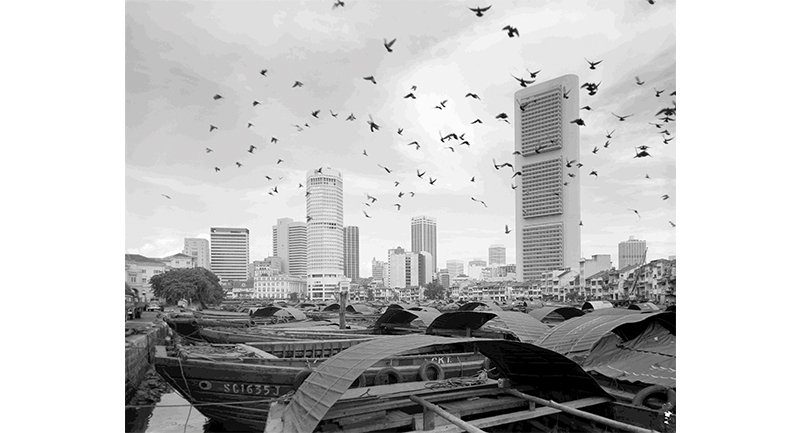 In 1984, this dramatic shot by Kouo Shang-Wei bagged him the first prize in the Singapore Cityscape Today photo competition organised by the Urban Redevelopment Authority. The photo shows pigeons in flight against the backdrop of skyscrapers like OCBC Centre and UOB Plaza in the Central Business District in the 1970s. In the foreground are bumboats clustered along the Singapore River. Kouo Shang-Wei Collection, PictureSG, National Library, Singapore.

Another notable part of the PictureSG Collection is a donation by French photographer Paul Piollet in 2013. Piollet contributed 160 colour slides featuring scenes of Singapore taken from the 1970s to the 90s, particularly of the Chinatown area. These photographs document the social life as well as the cultural and religious practices that are no longer seen in the city centre today. These include Teochew opera (including shots of the performers on stage, backstage as well as the audience), funeral processions, businesses operating along five-footways and hawkers.

The National Library also has a collection of more than 4,500 images capturing the activities of local arts groups and organisations, with the majority of them coming from established Chinese performing arts groups. These materials were received as part of larger donations that included publications, ephemera, and audio and video recordings.

In 2008, the National Library obtained permission to digitise some 1,000 photographs and publications from the Thau Yong Amateur Musical Association (陶融儒乐社). The association was formed in 1931 and continues to stage regular performances of Waijiang (外江)14 and Teochew opera and music today.15 The collection comprises photographs of the association’s members, costumes, performances, stage design and anniversary events.

In 2014, the Singapore Children’s Playhouse (新加坡儿童剧社), a Mandarin theatre group for children and youths, donated over 1,500 photographs and about 100 other items comprising books, brochures, periodicals, sound recordings, certificates, reels and vinyl records to the National Library. These materials document the performances and theatre productions of the group from the 1960s to the 80s. That same year, the National Library also received some 500 images from Siong Leng Musical Association (湘音社), which has been actively promoting traditional Nanyin music (南音) and Liyuan (梨園) opera16 in Singapore since its founding in 1941. The association remains active today and has won international awards for its performances. 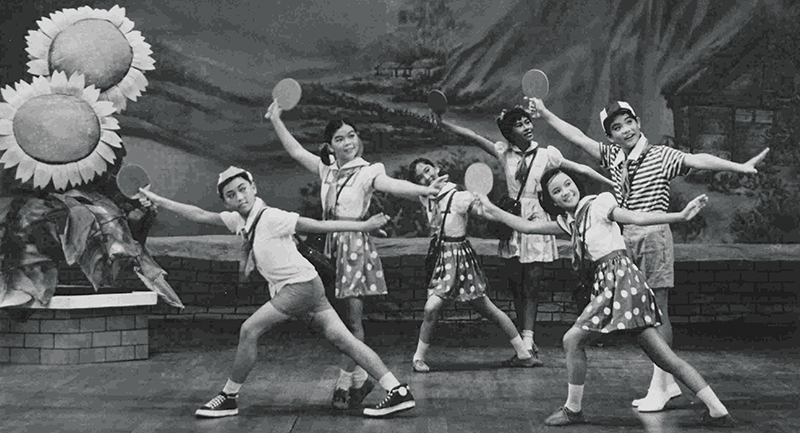 The library received a major donation of arts-related materials from The Substation, Singapore’s first independent contemporary arts centre, in 2015. Comprising 2,700 items, The Substation Collection comprises publications, print and digital photographs, sound recordings and ephemera. The materials chronicle the activities of The Substation since its founding in 1990 by playwright-dramatist and Cultural Medallion recipient Kuo Pao Kun.17

The 1,600 print and digital images in this collection provide visual documentation of over 150 events, programmes, exhibitions and performances held at The Substation from 1990 to 2013. The collection is useful to researchers who wish to trace the development of the contemporary art scene, artists, arts programming and independent art spaces in Singapore. 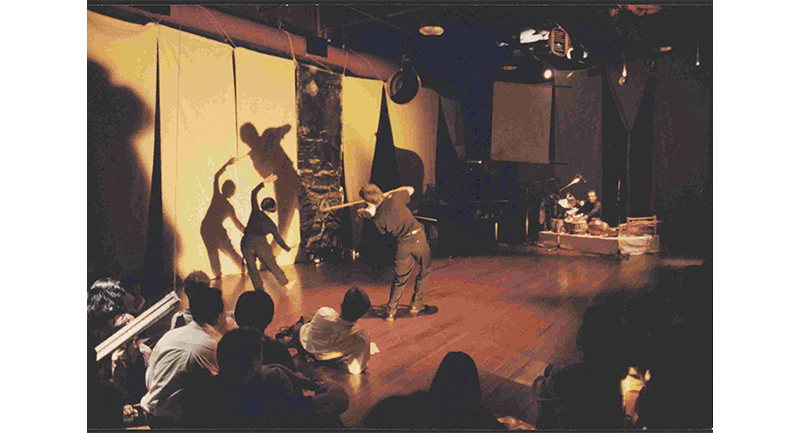 The “Harmony of the Spheres” performance held at The Substation‘s Music Space from 18 to 20 July 1997. The Substation Collection, PictureSG, National Library, Singapore.

In 2007 and 2008, the library organised a series of Heritage Roadshows during which people were invited to contribute photographs of historic buildings, landmarks, places and street scenes of Singapore from before the 1980s.

About 800 photographs – mainly of family events, everyday life and leisure activities – were loaned to the library for digitisation. Unlike documentary or professional photography, such images were created in the course of daily life and were intended as personal keepsakes. Many of the scenes depict individuals, groups and families posing at places of attraction and landmarks that no longer exist, such as the National Theatre, Van Kleef Aquarium and Great World Amusement Park. Photographs of kampongs and old-style dwellings capture living conditions of the past and a bygone way of life that has since given way to the modern-day high-rise living in public housing flats.

These photographs provide insights into Singaporean life, society and popular culture from the 1950s to the 70s gleaned from the intimate perspectives of personal and family photographs.

Today, images of Singapore are being created and disseminated at an unprecedented speed and volume due to the widespread use of smartphone cameras and the proliferation of social media platforms such as Instagram. While technology has made it easier to capture scenes of events as they unfold, such photographs are transient and may be difficult to locate subsequently unless they are properly indexed and archived.

In seeking to build a robust pictorial record of Singapore, the challenge today lies in handling this deluge with the help of technology to sift through, select, describe and organise an ever-increasing number of images for discovery, learning and research.

Janice Loo is a Librarian with the National Library, Singapore. Her responsibilities include collection management and content development as well as research and reference assistance on topics relating to Singapore and Southeast Asia.
Back to Issue