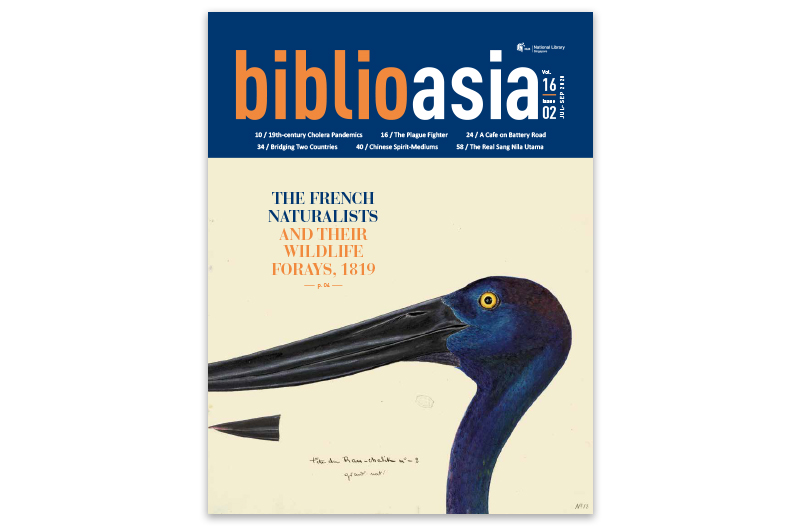 Although the Covid-19 pandemic has wreaked havoc around the world, affecting both lives and livelihoods, there is a silver lining: nature is thriving. In the cover story of this issue, we put the spotlight on two French naturalists, Alfred Duvaucel and Pierre Médard Diard, who were hired by Stamford Raffles to collect and conduct research on wildlife specimens in the region.

Stamford Raffles and the Two French Naturalists
Two young French naturalists were hired by Stamford Raffles in December 1818 to collect wildlife specimens in the region and they were with him when Raffles landed in Singapore in 1819. Danièle Weiler looks at their life and work.

Cholera in 19th-century Singapore
Bonny Tan examines how Singapore responded to cholera outbreaks in the past.

The Plague Fighter: Dr Wu Lien-Teh and His Work
Kevin Y.L. Tan tells us how Penang-born doctor Wu Lien-Teh fought the pneumonic plague in Manchuria and popularised the use of face masks.

G.H. Cafe: A Dining Landmark on Battery Road
This cafe once loomed large in Singapore’s dining and social scene. Vandana Aggarwal traces its rise and disappearance.

Cloudy with a Slight Chance of Rain: Singapore’s Meteorological Service
Lim Tin Seng examines temperature and rainfall records in Singapore over the past 200 years.

From Sea to Road: Building the Causeway
The foundation stone for the Causeway was laid 100 years ago. We look back at the history of this road and rail link.

The Chinese Spirit-Medium: Ancient Rituals and Practices in a Modern World
Self-mortification and the spilling of blood are hallmarks of the Chinese tangki. Margaret Chan explains the symbolism behind these practices.

Early Printing in Myanmar and Thailand
Gracie Lee looks at how Christian missionaries brought modern printing technology to these countries.